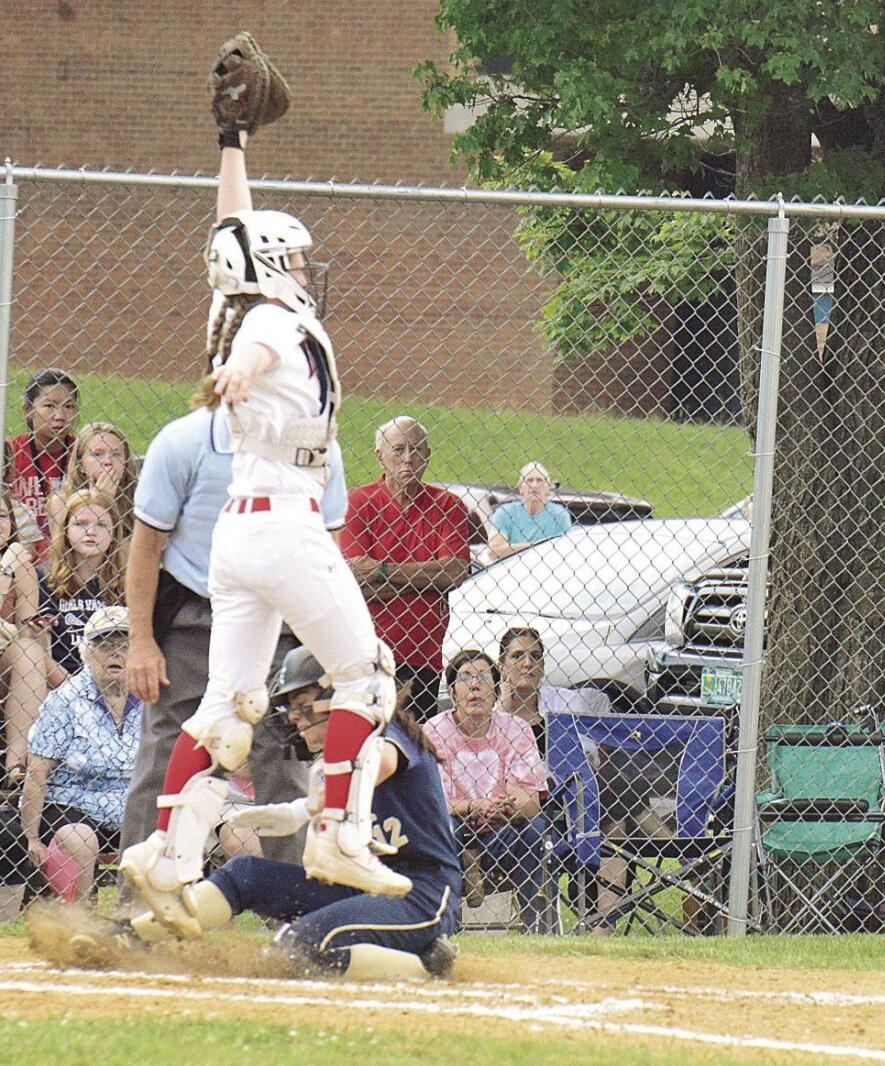 Mount Anthony catcher Masson Billert reaches for the ball as Essex’s Cailey Appenzeller scores in the third inning of Wednesday’s Division I semifinal. 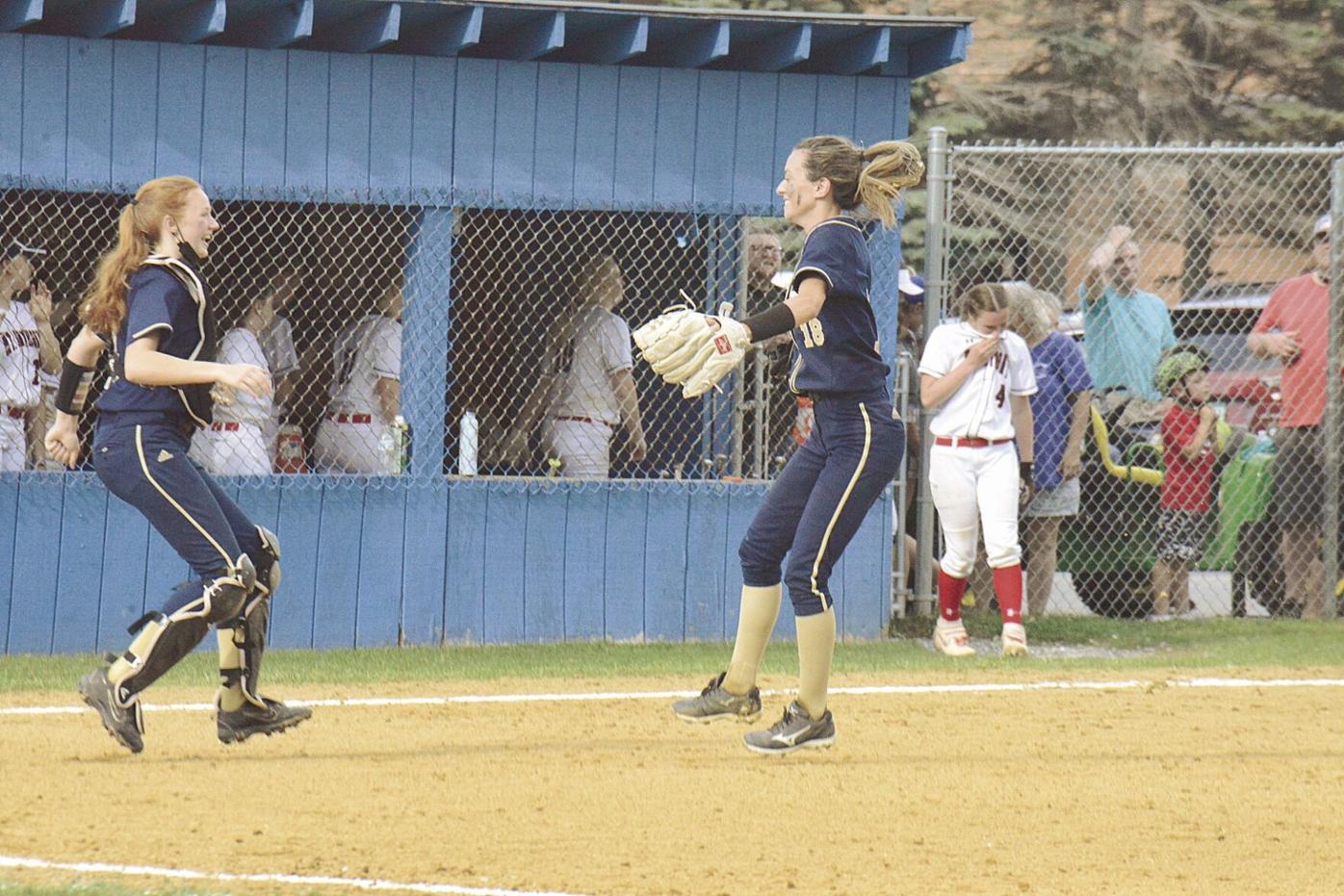 Essex's Emily Augustino, right, and catcher Hannah Gilbert, celebrate after the final out of the Hornets' 1-0 win over Mount Anthony on Wednesday in the Division I semifinal. 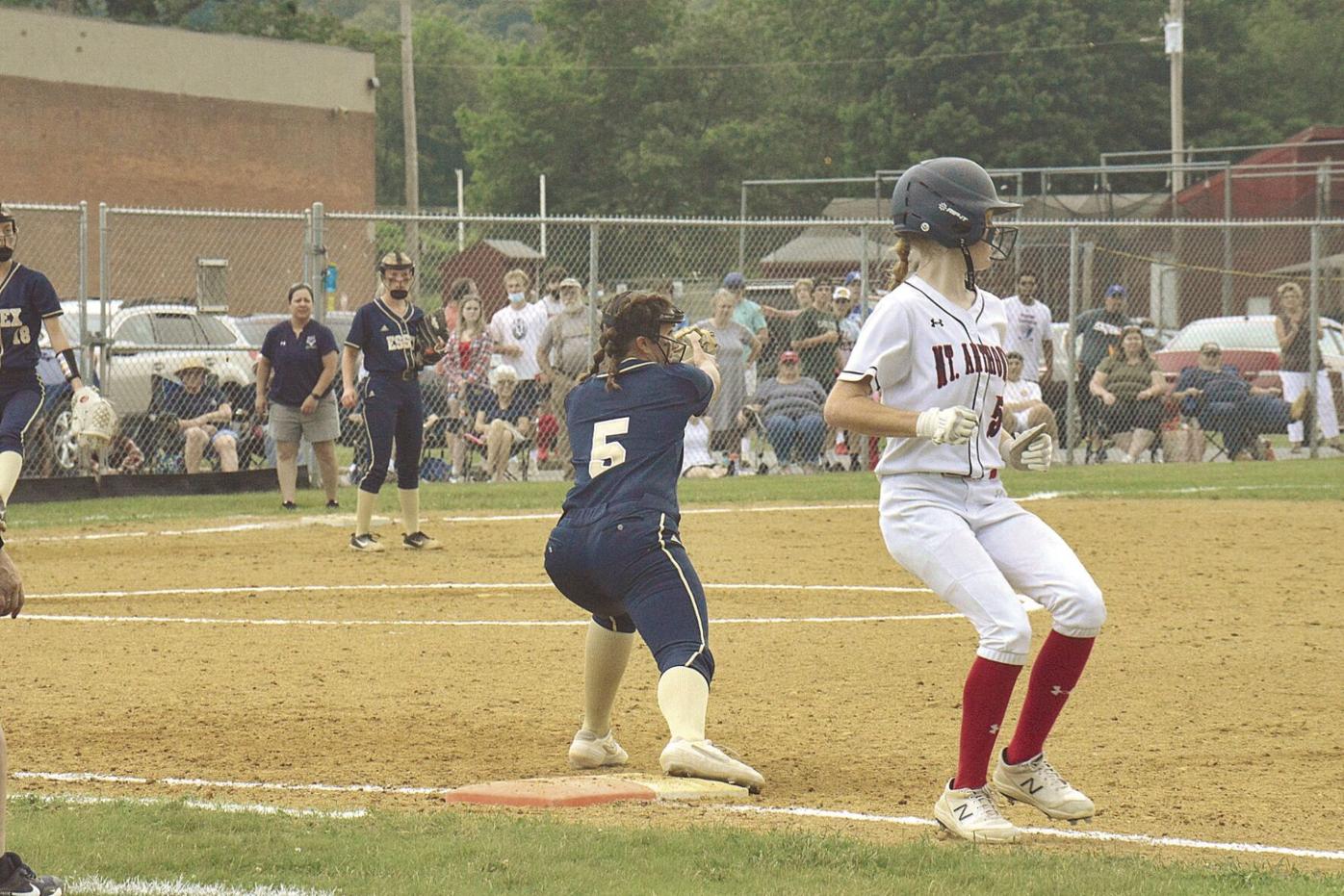 Allee George beats out an infield single during the third inning of Wednesday’s Division I semifinal against Essex. 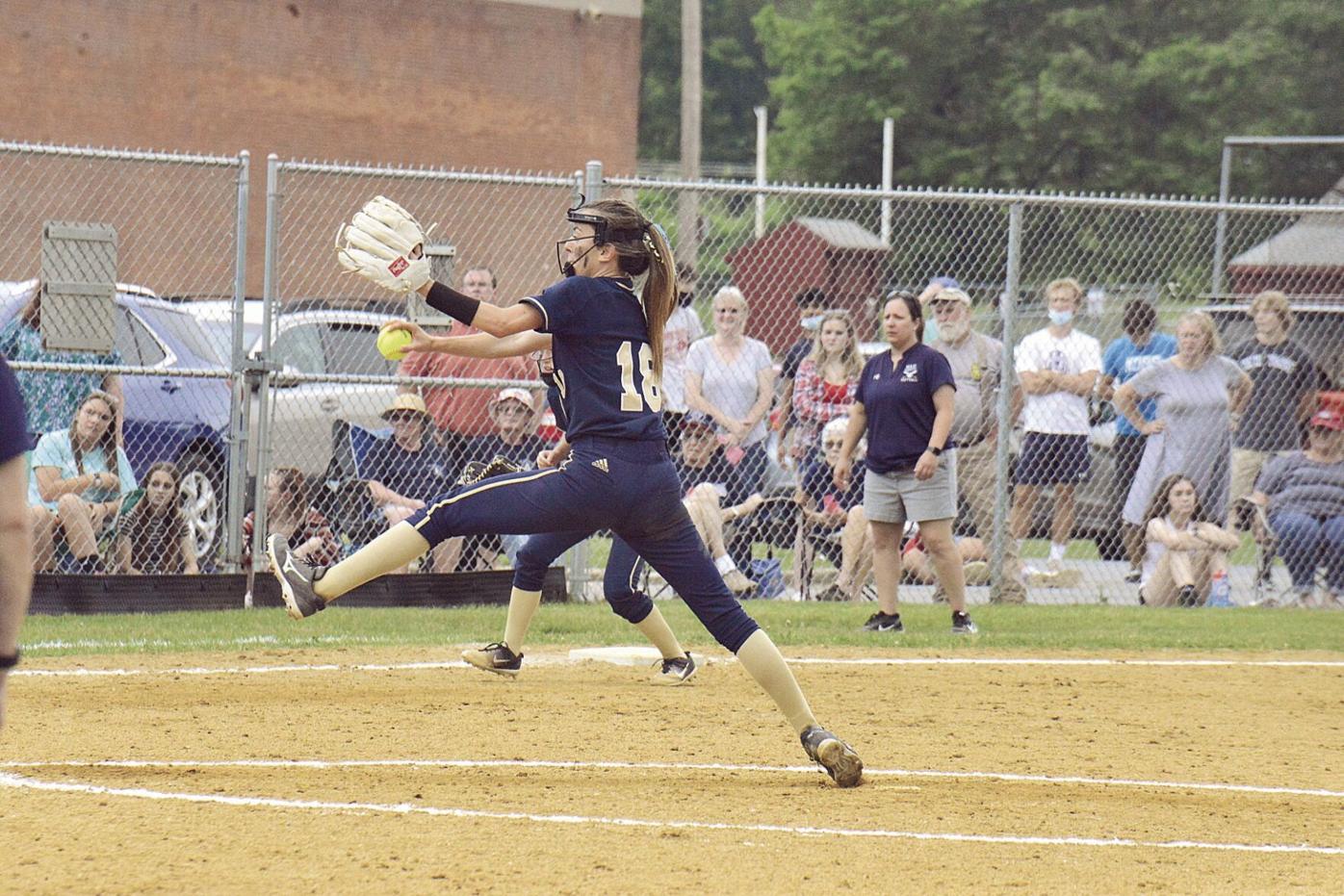 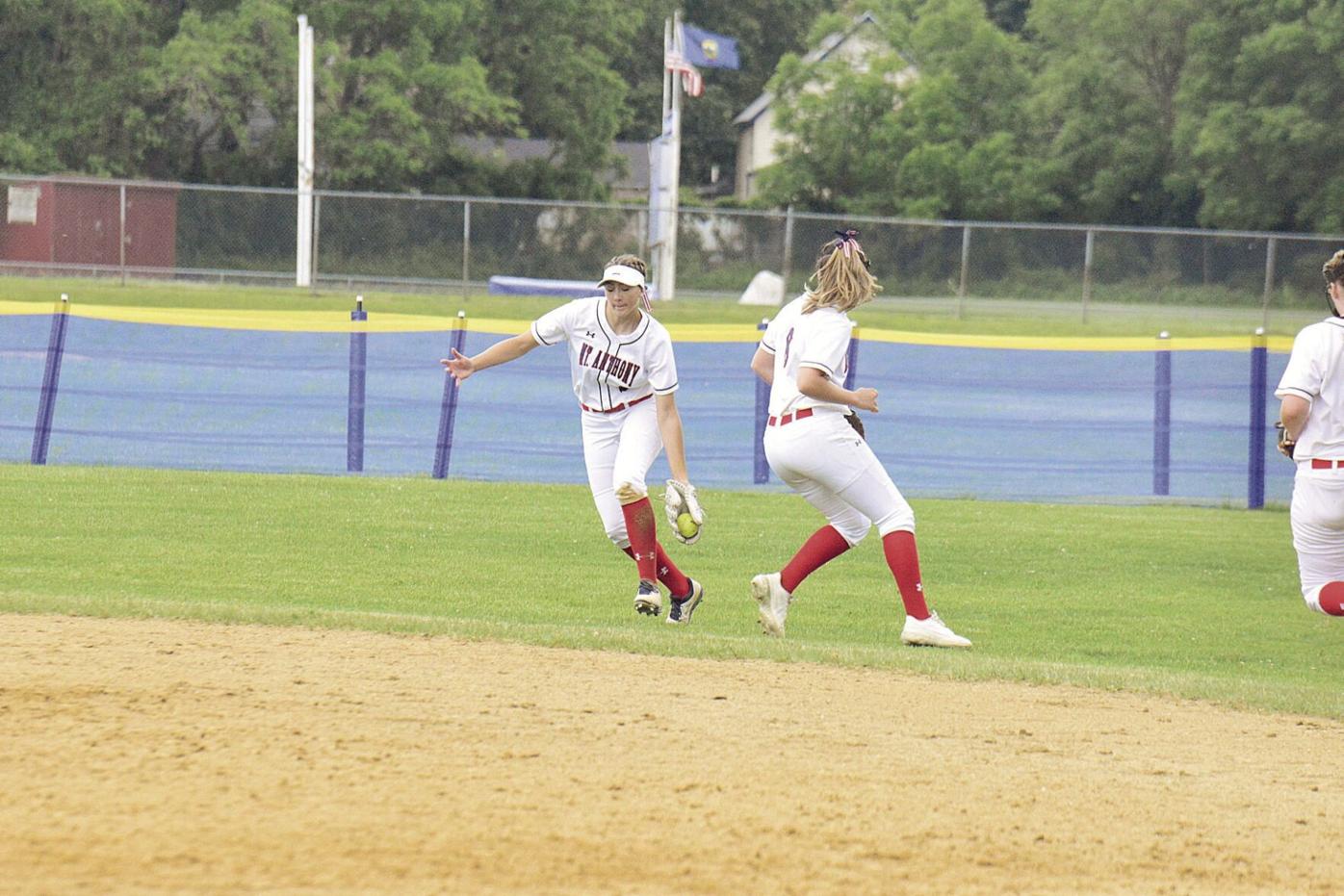 Mount Anthony's Danielle Moscarello plays the hop after a hit in the third inning of Wednesday's Division I semifinal.

Mount Anthony catcher Masson Billert reaches for the ball as Essex’s Cailey Appenzeller scores in the third inning of Wednesday’s Division I semifinal.

Essex's Emily Augustino, right, and catcher Hannah Gilbert, celebrate after the final out of the Hornets' 1-0 win over Mount Anthony on Wednesday in the Division I semifinal.

Allee George beats out an infield single during the third inning of Wednesday’s Division I semifinal against Essex.

Mount Anthony's Danielle Moscarello plays the hop after a hit in the third inning of Wednesday's Division I semifinal.

BENNINGTON — It was a game that neither team should have lost.

With a pitching matchup that was second-to-none between Mount Anthony’s Sofia Berryhill and Essex’s Emily Augostino, the only difference was a third-inning run by the Hornets, as No. 4 Essex upset No. 1 MAU, 1-0, on Wednesday in the Division I semifinals.

“We work one pitch at a time when we play a team at this high of a competition level,” said Essex coach Eric Rutz. “Mount Anthony has a very respected program down here. We knew that we were going to face a team of equals and we had to battle it out.”

The Patriots and Hornets met in the Division I final in 2016, 2017 and 2018 — with Essex winning twice and Mount Anthony once in 2017. Since then the teams had not faced off until Wednesday.

“I was proud of our team and I thought we play a really great game,” said MAU coach Katie Contrada. “We left it out on the field today and when you play a good team, sometimes things don’t go your way. That happens in sports. You can play a great game and lose and that’s what happened today.”

The game’s only run came in the top of the third. The No. 9 hitter for the Hornets, Cailey Appenzeller popped a ball into no-man’s land between second base and center field. Three Patriots had the opportunity to make the catch, but the ball fell for a single. After Emma Sabourin fanned, Taylor Detch reached on a bunt to put runners at first and second with one out. A fly to center didn’t move the runners, but with two outs, Jessica Rose — hitting out of the cleanup spot — hit a bloop single to left and Appenzeller scored to take a 1-0 lead.

“It’s working in tandem, as best we can. It’s east to get up there and take a big rip trying to hit a double or home run when you have someone on base,” Rutz said. “We want to be moving 60 feet at a time, no matter how it happens. That ball dropping in, that’s a heartbreaker for everybody. Then you get a bunt, move the runner over, and then get the base hit you’re looking for.”

The hard-luck loser in the circle was the senior Berryhill. She went the distance, allowing only five hits and the one run. She struck out seven and walked one. After a fourth-inning single from Emo Aboukhalil, Berryhill set down the final 10 hitters she faced in order.

“She pitched a fantastic game and with [Taylor Dicranian] down here for years, we knew the model [of a left-handed pitcher],” Rutz said. “We expected this kind of game.”

“Sofia was a warrior out there,” Contrada said. “She pitched an awesome game, she was hitting her spots and when they made solid contact, our defense was there to make the plays.”

But the Patriots struggled to find a groove offensively against Augostino. MAU did have some base runners, but never more than one in any single inning.

In the second inning, Danielle Moscarello led off with a ground rule and advanced to third on a groundout, but Augostino got a pair of strikeouts as well, stranding Moscarello.

In the third, Allee George had an infield single and in the fifth, Mia Paligo added a two-out single.

There were even a couple of long fly balls to the outfield, but the Hornet defense was up to the task, catching each with no errors. In the bottom of the fourth, Masson Billert crushed a ball to right center field, but the fielder made a beautiful catch on the run to end the inning.

In the seventh, Grace Kobelia represented the final chance for MAU, and she hit a long fly to left that was caught to end it.

“I see her with two outs in there, I know what she can do,” Rutz said. “When you have a hitter of that caliber up there, it doesn’t take a lot to get it out there.”

Overall, Augostino was terrific in the circle, going all seven innings. She allowed only three hits, no runs, struck out eight and didn’t walk a batter.

“I thought Emily threw a fantastic game and got their hitters to chase a couple [of pitches],” Rutz said. “She’s been our main pitcher all year, as a senior, we told her it’s her chance to take the ball and pitch yourself to a state title game and we’ll go from there.”

The Patriots season ends at 13-1, while Essex will play BFA-St. Albans on Sunday at 3 p.m. for the state championship. With only two seniors (Berryhill and Moscarello), Contrada and co-coach Brooke Remington said this is a game that will resonate until next year.

“Our kids are ballers and they come out every day and they work hard and they’re ready to play,” Remington said. “We had a lot of young kids this year and not a lot of playoff experience. They will definitely remember this and come back. They’ll bounce back and be working just as hard next year.”

And after the 2020 season was canceled, Remington and Contrada were just happy to have the season.

“We had a great year, we were 13-1,” Contrada said. “Both Brooke and I loved coaching these kids every day. It was a fun group and this season has been an absolute success.”