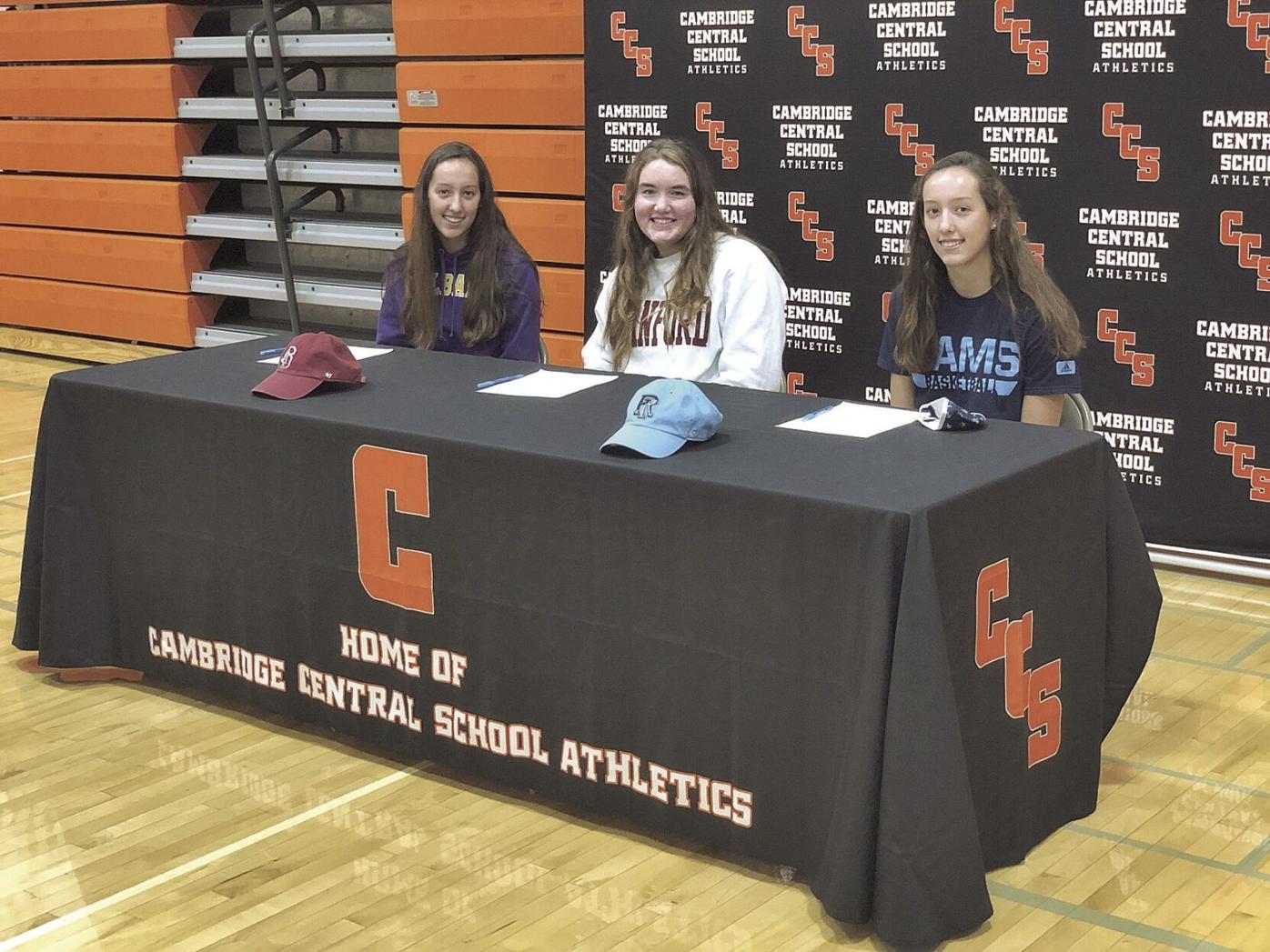 Cambridge athletes Sophie Phillips, Lilly Phillips and Fiona Mooney sign letters of intent for college last month. The recruitment process has been much different for high school players during the pandemic. 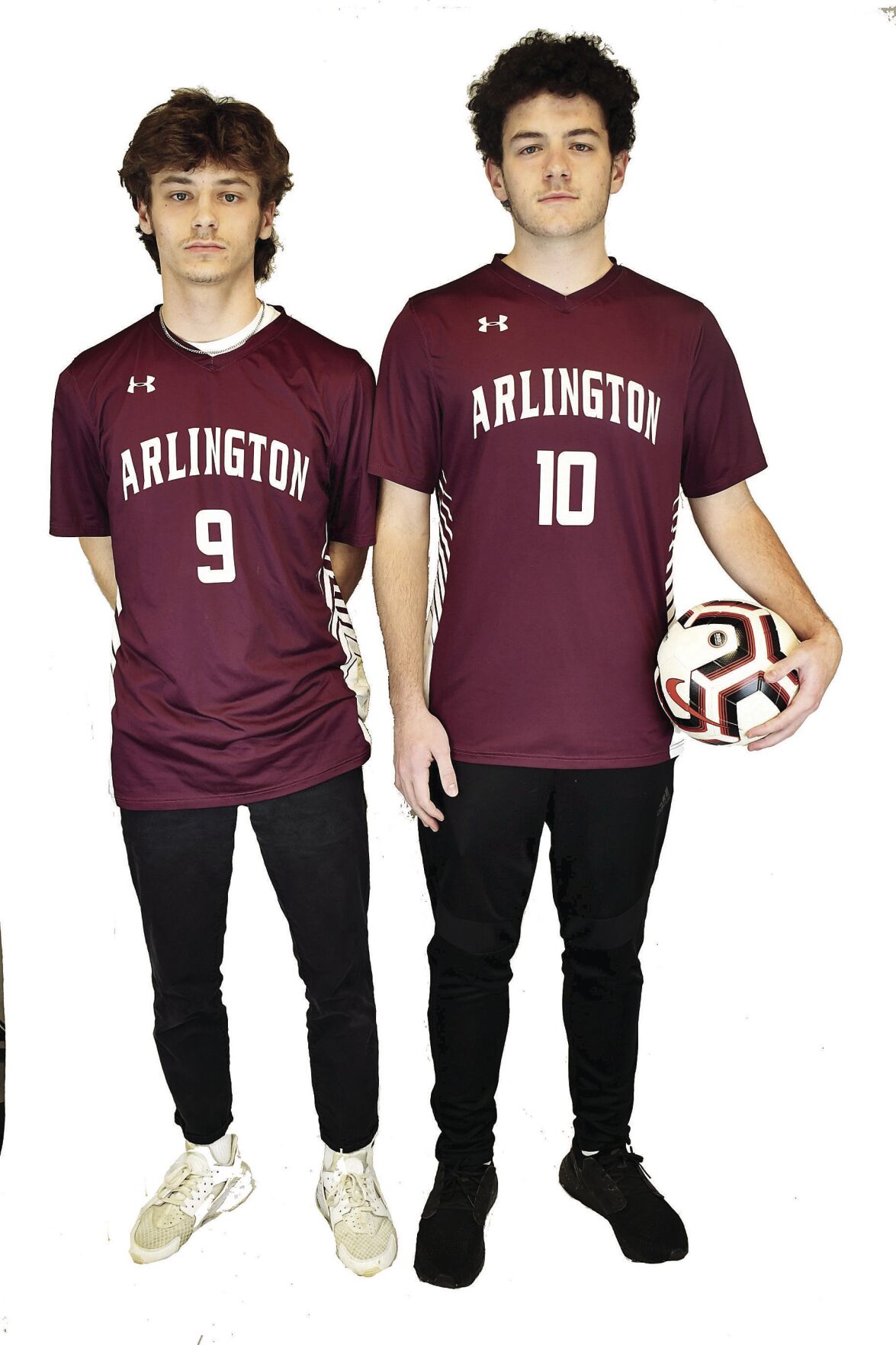 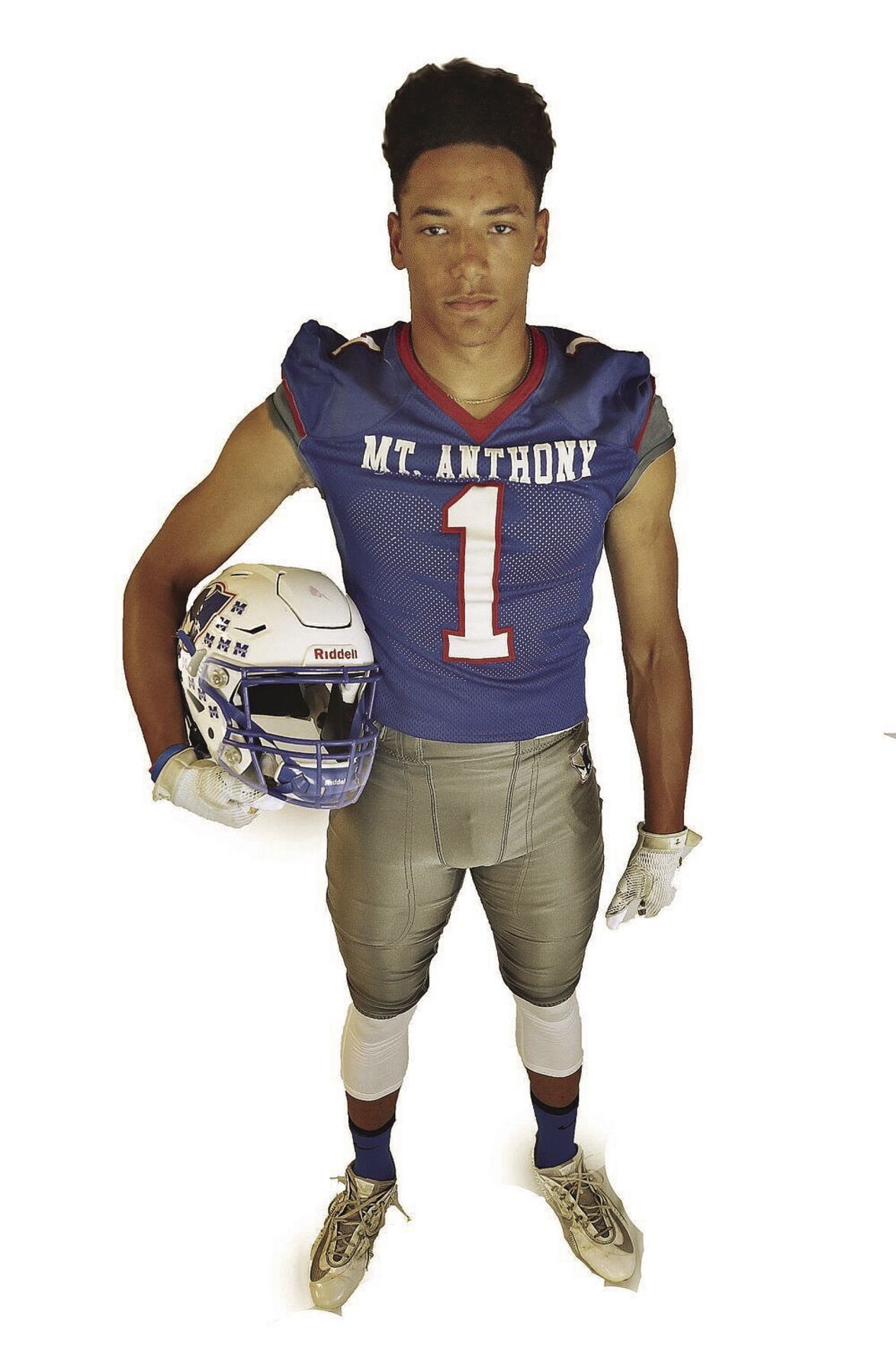 Cambridge athletes Sophie Phillips, Lilly Phillips and Fiona Mooney sign letters of intent for college last month. The recruitment process has been much different for high school players during the pandemic.

The coronavirus pandemic has visibly affected the daily routine of student athletes across the country.

Seasons have been pushed back — or even worse — canceled altogether. Sports have had to adapt and modify how they are played to lower the risk of spreading the virus.

The pandemic has also affected student athletes looking to continue their athletic careers at the collegiate level.

Gavin Johnson, a Mount Anthony football player, is considered one of the best players in the state. Just ask his coach over the past four years, Chad Gordon.

“He’s hands down one of the best players in the state,” Gordon said after Johnson’s game winning interception return for a touchdown Oct. 29 against Burr and Burton. That clutch play helped MAU reach its first championship game appearance in more than two decades.

It’s not just his coach, either. Johnson was named to Sports Illustrated’s watchlist for the 2020 football season — the only Vermont player to crack the 1,000-player list.

Johnson had eyes on him even before his senior year began. He said he began the recruitment process during March — right before the pandemic changed everything.

High school football in Vermont looked a lot different in 2020. Instead of the traditional 11-on-11 tackle, a 7-on-7 one-hand touch version of the game was played.

That left Johnson with unique challenges during the recruitment process. Would college coaches take his senior year film seriously? Johnson — a 6-foot-4 208-pound wide receiver — often uses his physicality to his advantage on the field and one-hand touch is not the most physical sport in the world.

Johnson decided to send coaches both his junior and senior season film.

“Coaches love to see the most updated film possible,” Johnson said. “But, with mine being non-contact, pass-only, there’s parts of playing wide receiver that are not all passing.”

Run-blocking is a big part of a wide receiver’s job on the field.

“We just tried to make the best of what I was given in my situation,” Johnson said.

What he was given was a shortened senior season. Skill position players were allowed to play the second and fourth quarters of each game in 2020, with the linemen — or “big skills” — taking the field in the first and third quarters.

“Playing a shorter season, there’s a direct connection to not having a lot of film,” Johnson said.

“And then also only playing two quarters out of a four-quarter game, that was a new experience for me.”

Johnson announced on Twitter earlier this week that he will become an Assumption Greyhound, continuing his football career in Worcester, Mass.

Getting to this point was not easy. Johnson said he worked hard to get as much exposure as possible through social media — namely Twitter — during his recruitment process.

“I have a good base for my Twitter,” Johnson said. “I’ll tell you what, there’s no other way to get recruited right now. That’s really the only way, that’s everyone I’ve ever come in contact with, besides having Chris (Redding) as a contact.”

Redding — from Bennington — played football at MAU from 2009-2011 and played at Burr and Burton during his 2012 senior season. After graduating from BBA, Redding went on to play Division I FCS football for the University of New Hampshire and currently serves as a high school football coach at Ardrey Kell High School in Charlotte, N.C.

“I really had no idea what I was doing, so I tapped into a local source and he explained the whole thing on how to get your name out there,” Johnson said.

Redding explained to Johnson that the recruitment process is about placing yourself in the best position possible.

“Setting expectations for yourself, but making sure that you hold yourself accountable to that,” Redding said. “Make sure that you’re setting goals that maybe other people can’t see right now, but you can see and being able to put yourself in a situation to be successful.”

“He’s honestly seen some of the craziest athletes in the world walk through any school he’s been at,” Johnson said.

Sandlin provided Johnson with valuable information on how to best present himself as a football player during a phone conversation.

Johnson, who still has lots of family in Alabama, is a big Crimson Tide fan, and connecting with a former coach was a moment he won’t soon forget.

“Talking to him, it’s like a dream come true,” Johnson said. “He’s the smartest guy I’ve ever talked to in the football world. It was really like a surreal moment.”

The MAU wideout was able to ask specific questions to somebody who has recruited at the highest level.

Redding said Johnson’s hard work will set him up for success.

“I think it’s an opportunity for him to change his life, and his family’s life which I’m extremely excited for,” Redding said. “Academically, he’s going to get an opportunity to get a good degree, and be able to really change the course of his life through the game that he loves.”

Dominic and Lewis Whalen are two more local athletes looking to continue their athletic careers once they graduate from Arlington High School this spring.

The twins had a dominant 2020 season as goal scorers for the Eagles soccer team. Both played a big part in Arlington’s 2018 state championship victory, too. Lewis scored the game winning goal in overtime for Arlington that day.

The opportunities at the next level aren’t as plentiful as they normally would be.

“The NCAA has extended a year of eligibility for the seniors this year, if they got their season cancelled,” Lewis said. “So a lot of schools are not recruiting new classes this year which makes it harder.”

Lewis said he began reaching out to college coaches this year.

“I’ve reached out to some coaches and I’ve gotten some responses saying they’re interested.”

Dominic said he has received interest from colleges to participate in track and field for their programs, but right now, soccer remains his goal.

“I’m going to have a decision to make at some point, but I’m looking to play soccer as well,” Dominic said.

Along with a shortened senior season, the brothers believe that the cancellation of their spring soccer league and soccer showcases throughout the region have made it difficult for coaches to see what is out there for talent, and for athletes to show off their skills. The brothers would have played for the Berkshire AJAX soccer club in Williamstown.

“We would have been at tournaments and we would have gotten more exposure to college coaches,” Lewis said. “At the same time, showcases — going to play in front of a bunch of coaches — all of those have been canceled as well. That makes it a lot harder.”

The Whalen brothers are considering taking a gap year. During the year away from school, the brothers would play for a year-round team.

“Just staying in that high-intensity mindset, staying motivated,” Dominic said. “Playing as much soccer as we can would be the goal if we do decide to take the gap year.”

“For me, I want to play soccer somewhere I can be competitive.” Lewis said.

The brothers have played soccer together their entire lives. Would they want to play together at the collegiate level, too?

“Definitely not opposed, but not necessarily attached to that idea,” Lewis said.

“If we were to receive different opportunities from different schools, that wouldn’t be an issue,” Dominic said. “Obviously it would be incredible to take this relationship onto the next level, but not a deal breaker if we can’t.”