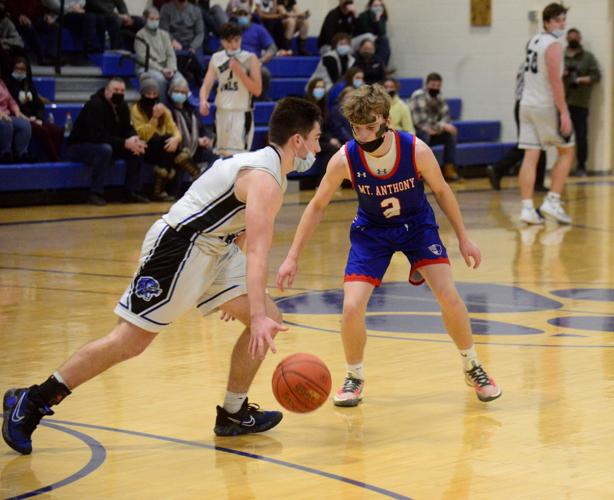 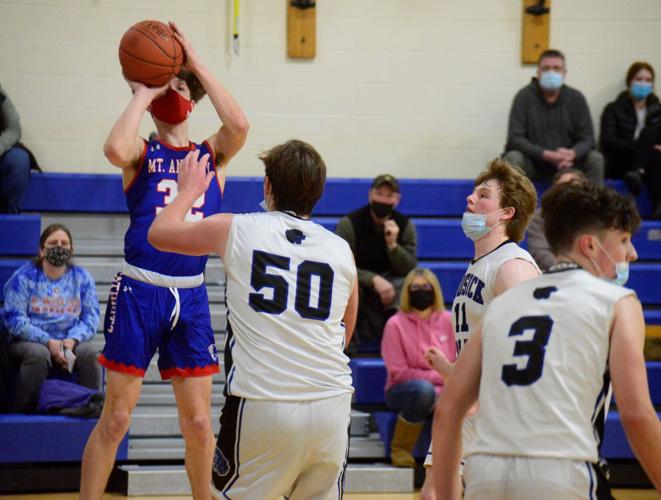 Austin Belville rises for a jump as Tucker Thayne defends.

Austin Belville rises for a jump as Tucker Thayne defends.

HOOSICK, N.Y. — Hoosick Falls came out on top 53-36 in the return of the inter-state rivalry between the Panthers and Mount Anthony on Monday.

Hoosick Falls entered Monday’s contest red-hot offensively, scoring 93 points in a win over Berlin on Thursday and another 75 the next night in a win over Spa Catholic.

MAU held its rival in check for most of the night, but a late third-quarter 7-0 run from the Panthers was the separation they needed.

After holding the Panthers offense to 25 points in the first half, MAU didn’t allow a field goal over the first five minutes of the second half. The only two points for Hoosick Falls up to that point came from a couple Connor Jones made free throws.

MAU battled back from a 25-19 halftime deficit and took a 28-27 lead midway through the third quarter. A Josh Worthington 3-pointer from the right wing gave MAU its first — and only — lead of the second half.

That’s when Jake Sparks took command of the game. The Hoosick Falls forward was physical in the paint all night long, scoring a game-high 26 points. His first basket of the third quarter was an uncontested layup with two minutes left on the clock to once again give the Panthers the lead. His next two baskets were through contact in the final minute of the quarter, finishing two shots near the hoop through contact and stealing the momentum from MAU.

The Patriots managed just one point over the final four minutes of the third as Hoosick Falls built a 34-28 lead heading into the final quarter.

Miles Smith scored a layup in traffic with 6:21 left in the game, converting the and-one and stretching the Panthers lead to double digits, 38-28. The 3-point play forced an MAU timeout.

MAU answered with a Carter Thompson contested 3-pointer from the left wing the following possession, bringing MAU back within seven. But after the make from downtown, MAU’s offense went cold. The Patriots managed five points over the final six minutes of the game as the Panthers defense sealed the win.

A few offense runs from Hoosick Falls was the difference maker on Monday. The Panthers jumped out to a 7-2 lead within the first three minutes of the game. MAU settled in for the remainder of the quarter, allowing just two points over the next five minutes. The Patriots took a 11-9 lead into the second thanks to a 3-pointer from Thompson in the final seconds of the first.

That’s when Sparks made his first impression on the game, personally outscoring MAU 11-8 in the second. The junior hit a couple 3-pointers, but much of his damage came within the paint. He took advantage of second-chance opportunities and didn’t seem fazed finishing through MAU defenders.

It was a battle for much of the night. Hoosick Falls coach Mike Lilac knew nothing would come easy against Mount Anthony.

“Mount Anthony played some good defense, they mixed it up,” Lilac said. “Both teams just played hard; that’s the good thing about playing each other, both teams are always gonna play hard no matter what the records are.”

It’s the first time the schools have been pitted against each other in two years as inter-state games were canceled last season because of the coronavirus. Whenever Hoosick Falls and Mount Anthony face one another, it’s a big deal.

“Our boys all look up for this game,” said MAU coach Hunter Stratton. “You know, they always mark it on their calendar. Everyone knows each other, so everyone kind of gets up for this game. It’s a big game.”

Stratton was pleased with how his team played defensively for much of the game, but said the fourth quarter hurt them.

“We just kind of lost it there at the end, we stopped being tough and mentally tough.”

The Patriots get their chance at revenge on Monday, when the Panthers come to Kates Gymnasium for a 7 p.m. game.