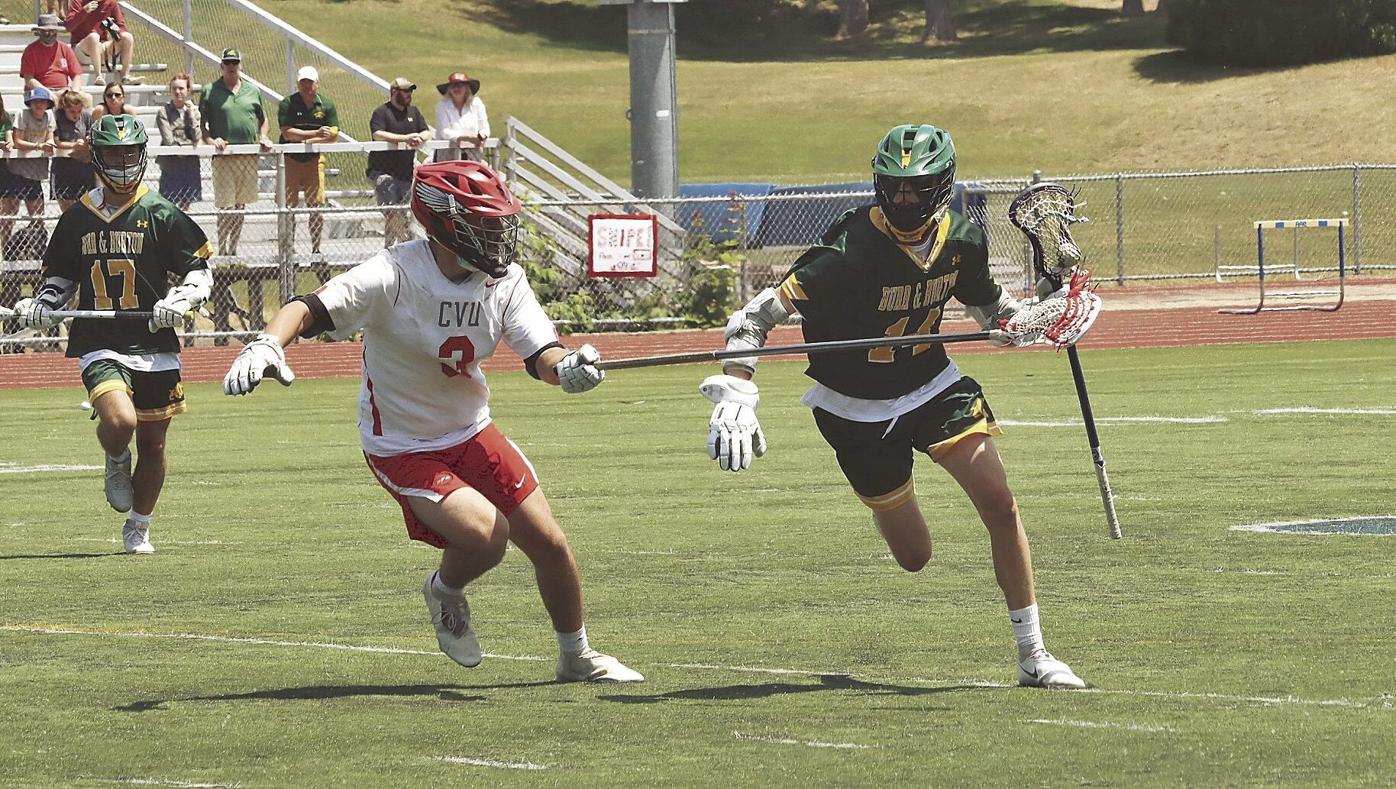 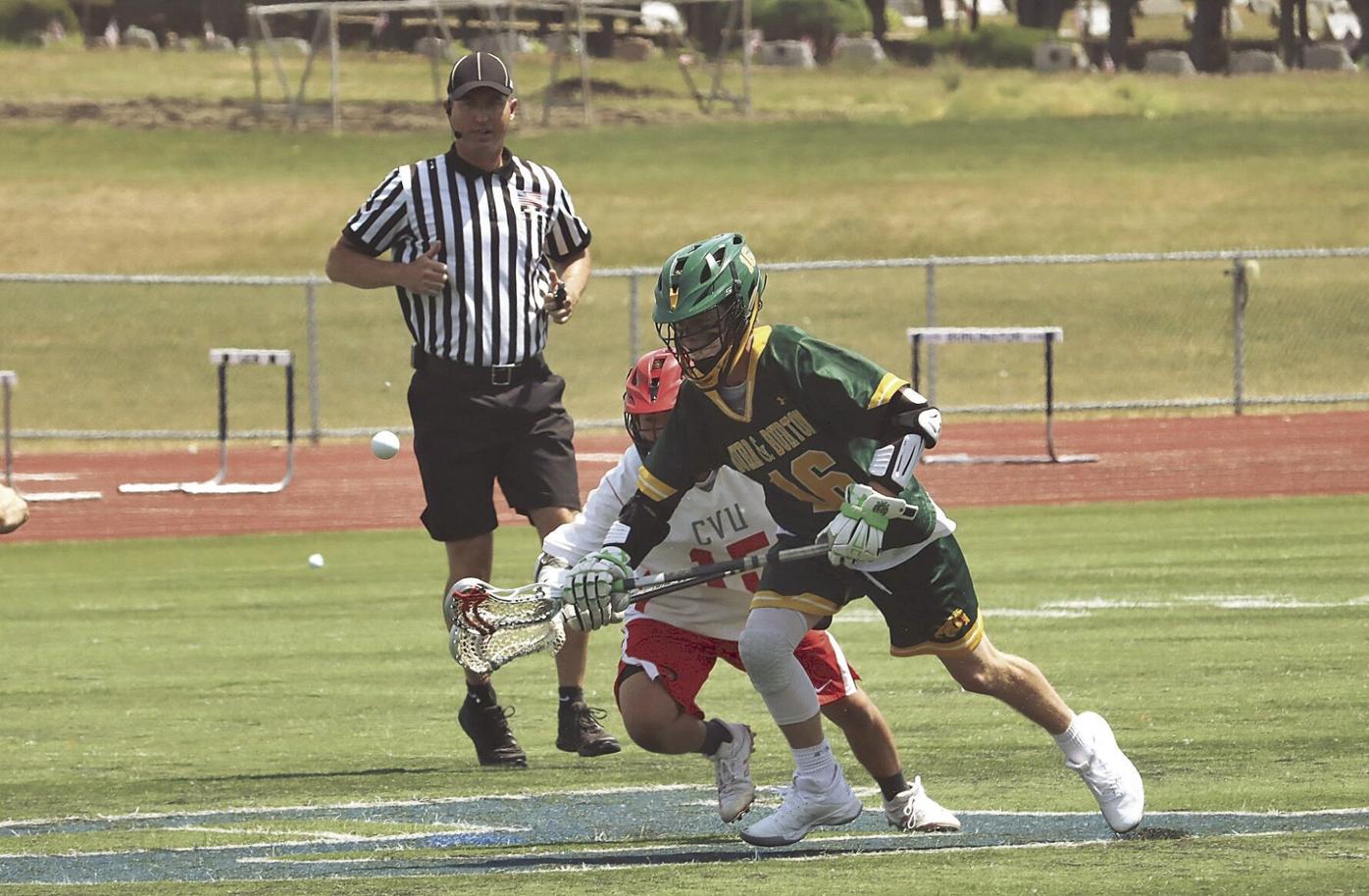 BBA’s Ryan Nolan wins the faceoff during Saturday’s final. Nolan won 14-of-17 during the game against CVU. 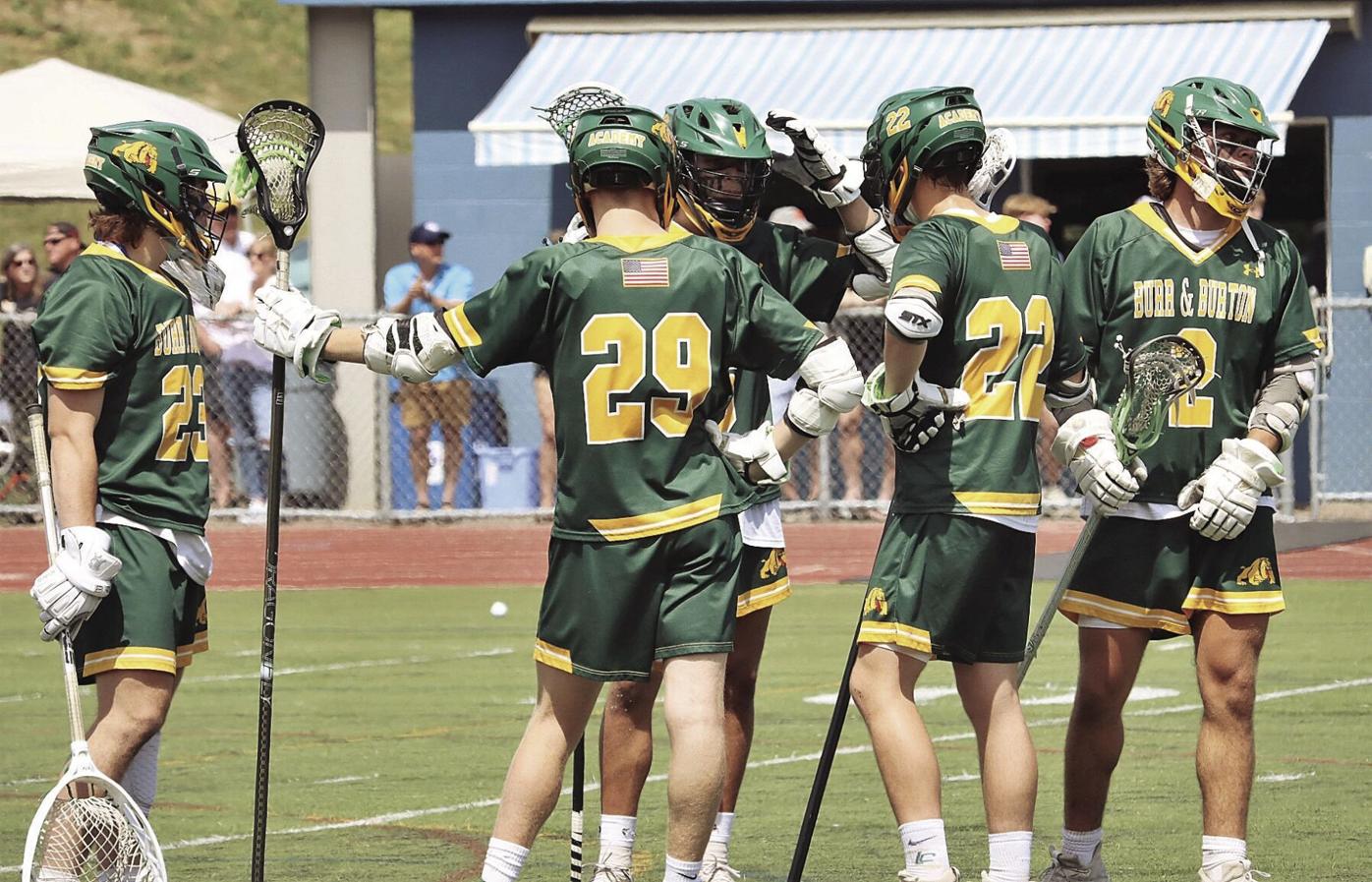 The Burr and Burton regroups during a timeout in the second half of Saturday’s final. 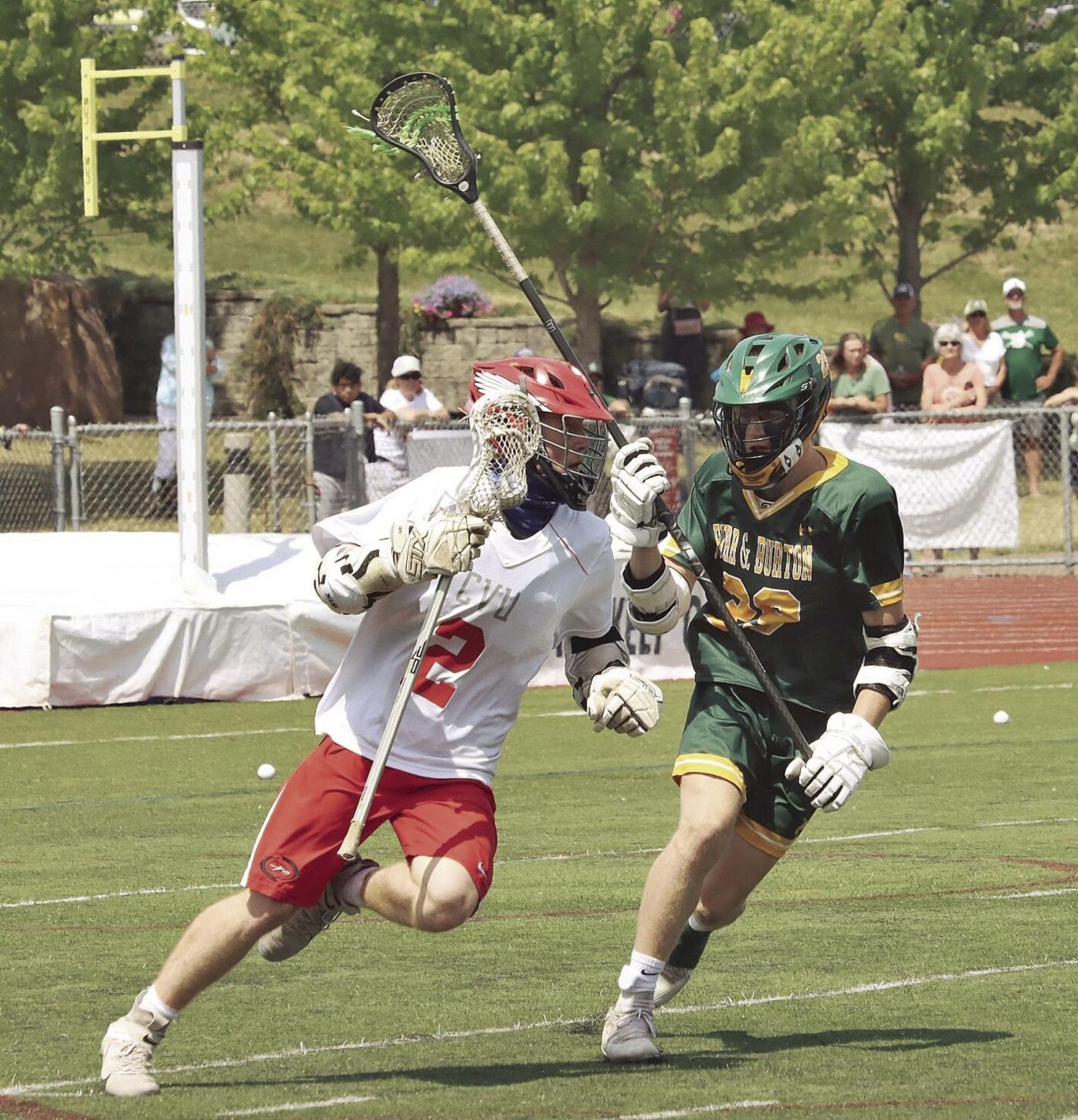 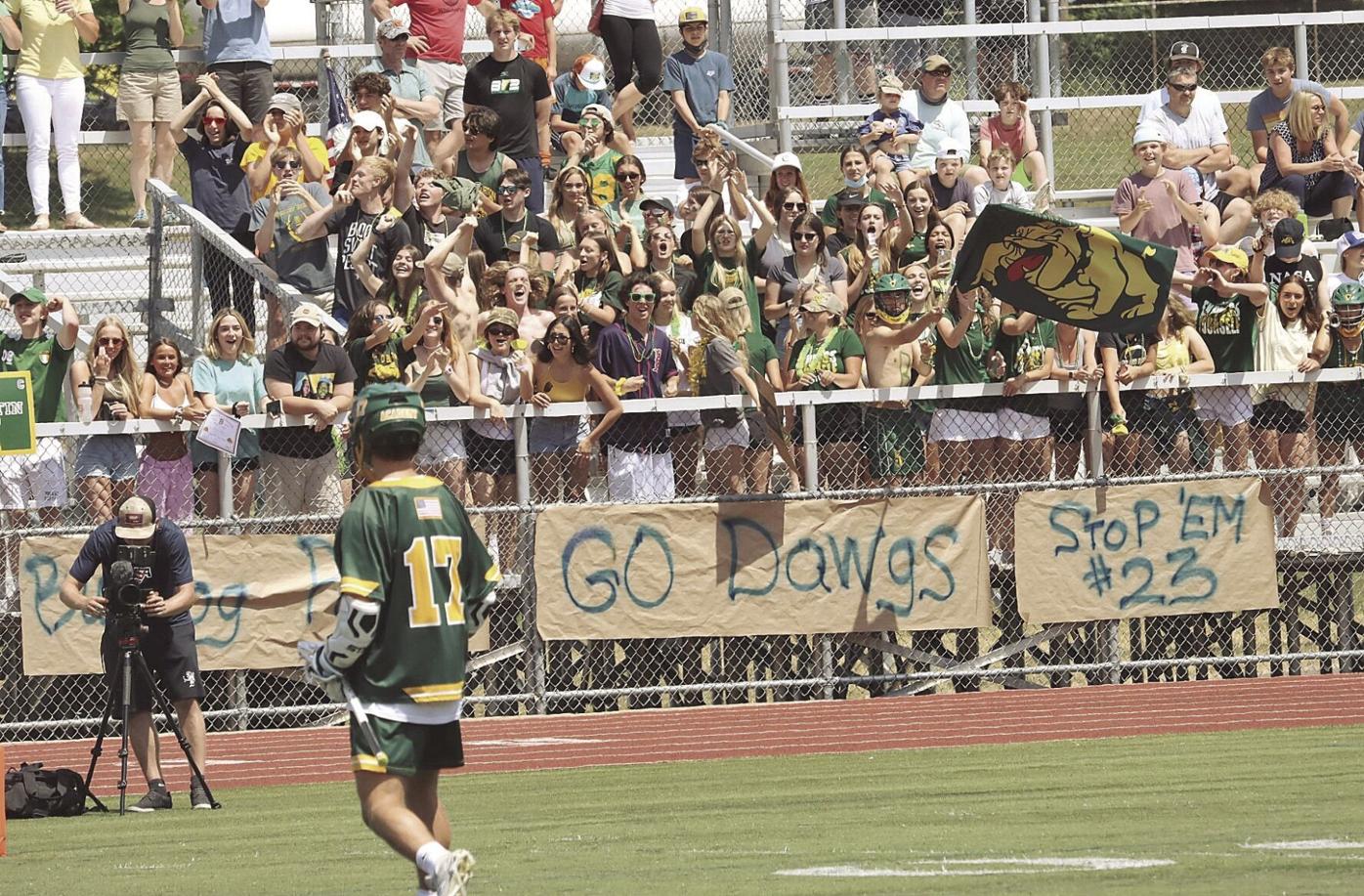 Burr and Burton fans cheer on the Bulldogs during Saturday’s Division I championship at Burlington High School. 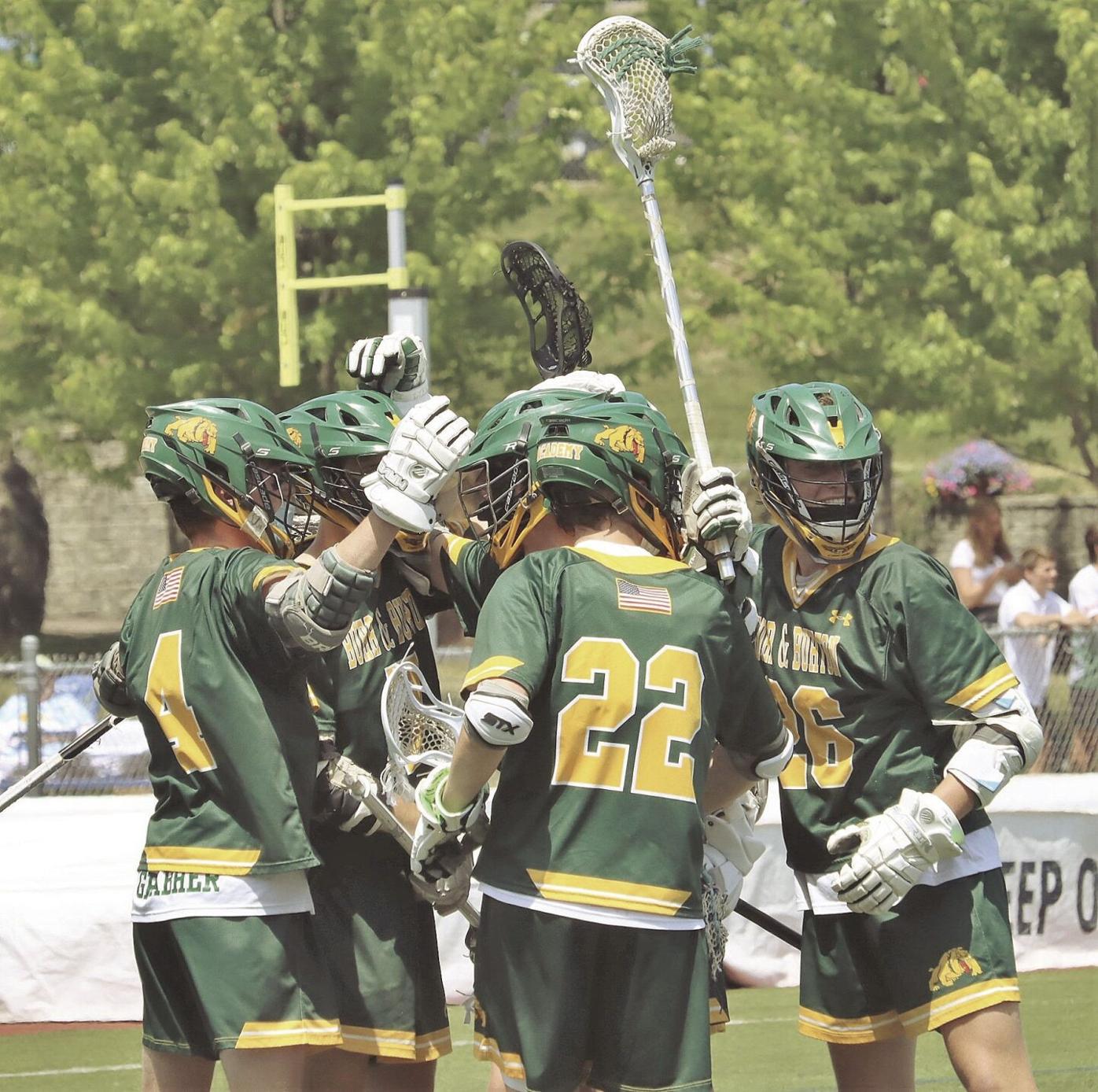 Burr and Burton players celebrate after a first-half goal during Saturday’s Division I final. 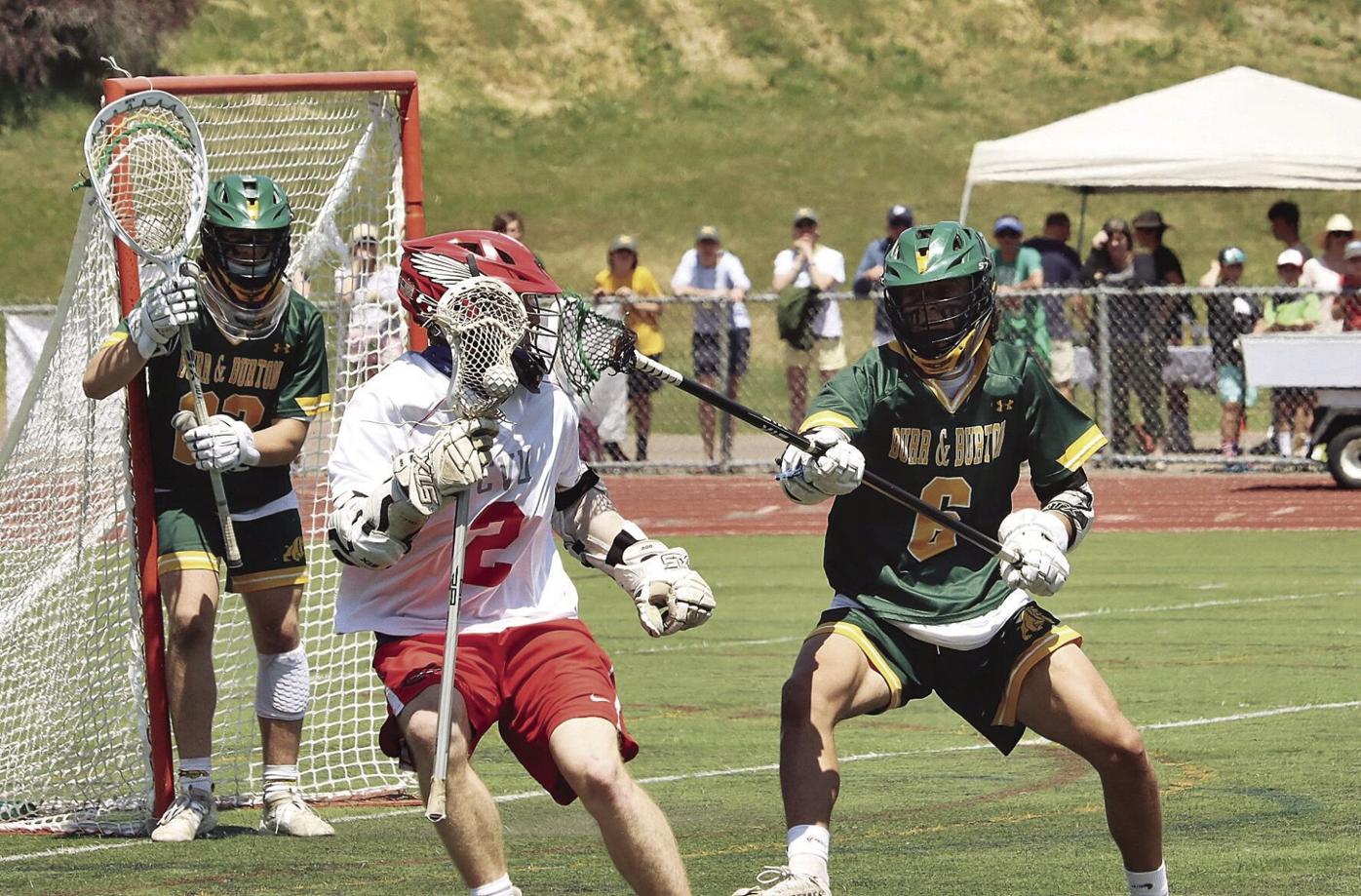 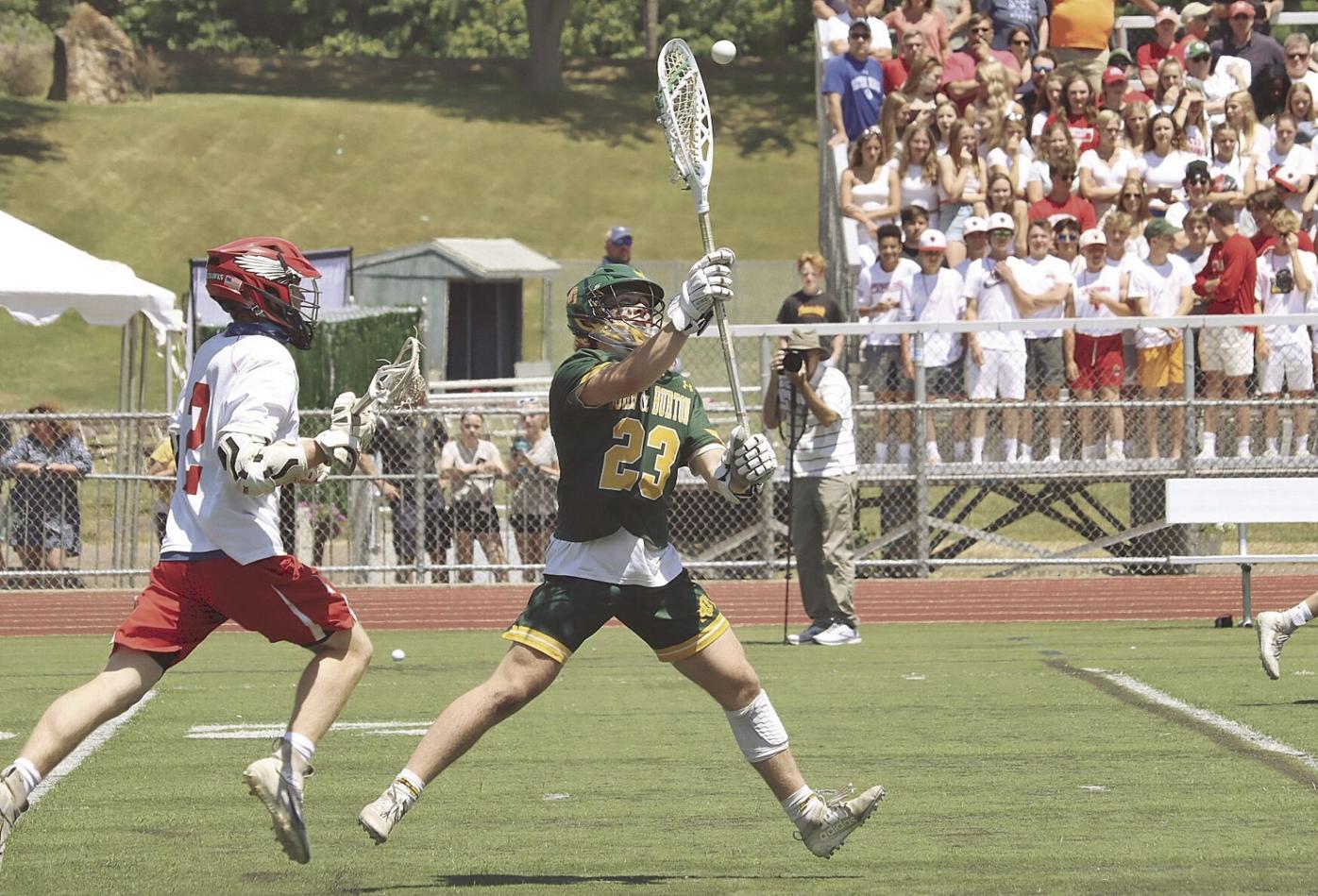 BBA goalie Jack Morrison clears the ball during the first half of Saturday’s final. 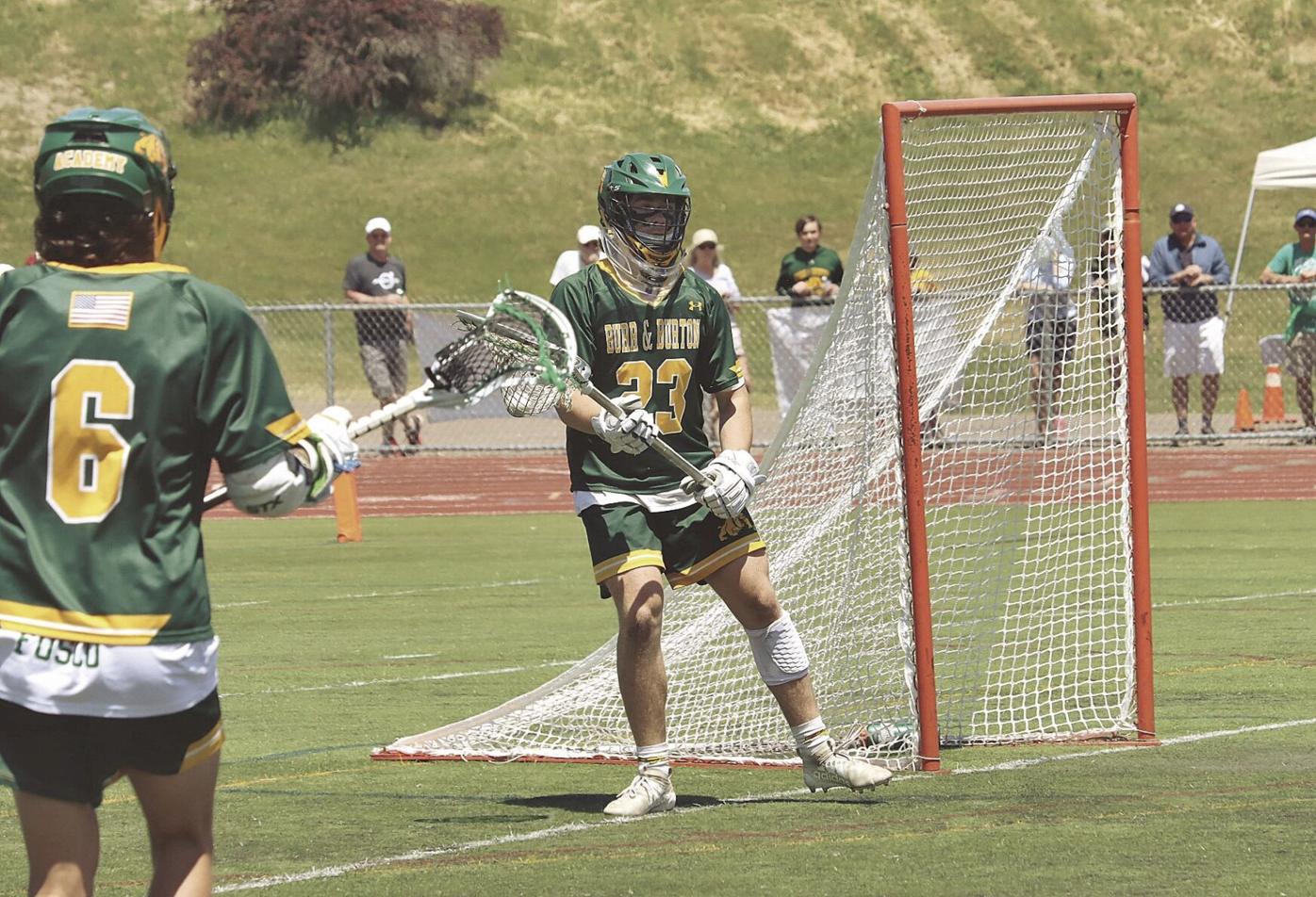 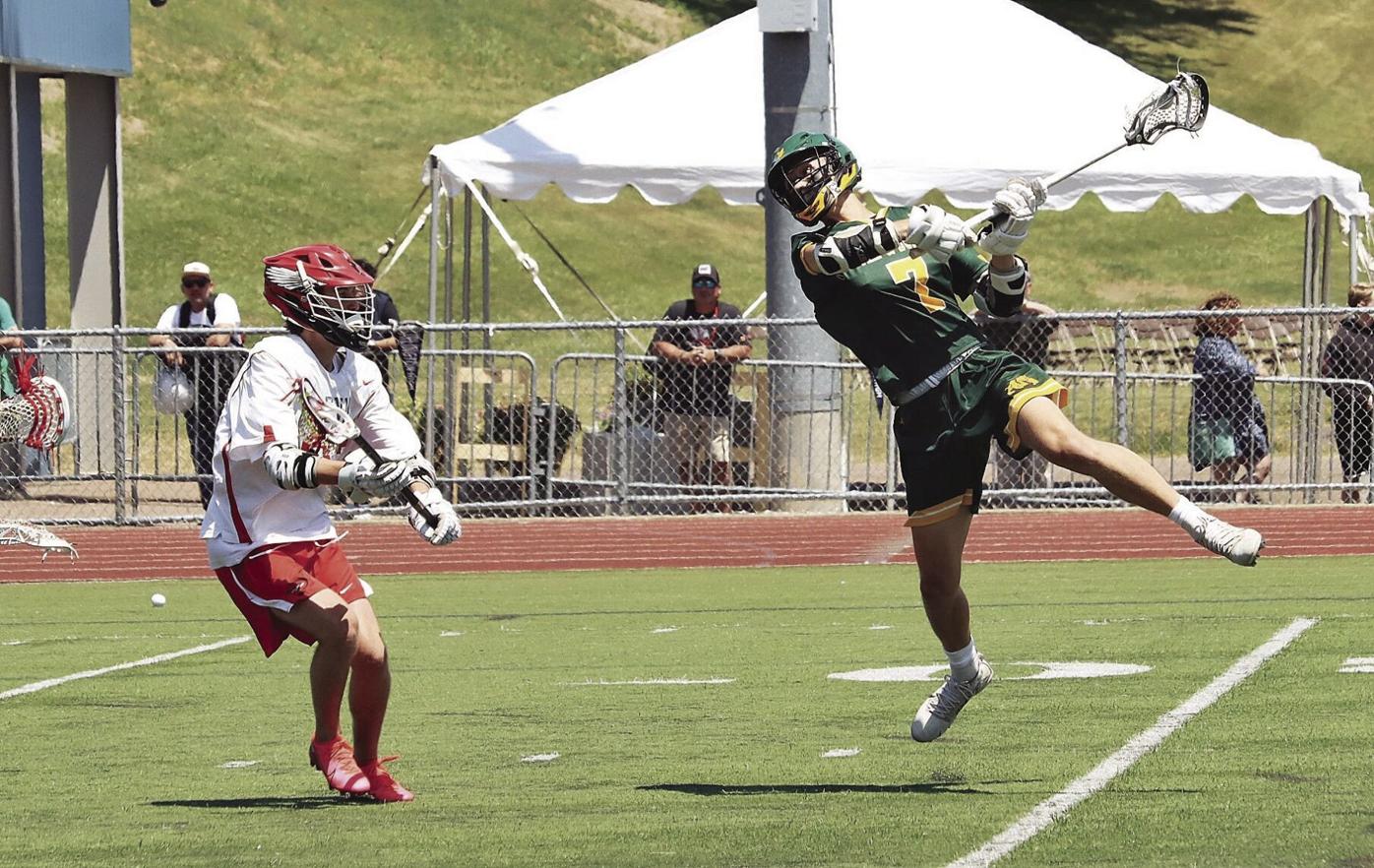 BBA’s Nicky Miceli takes a shot at the goal during the first half of Saturday’s final. 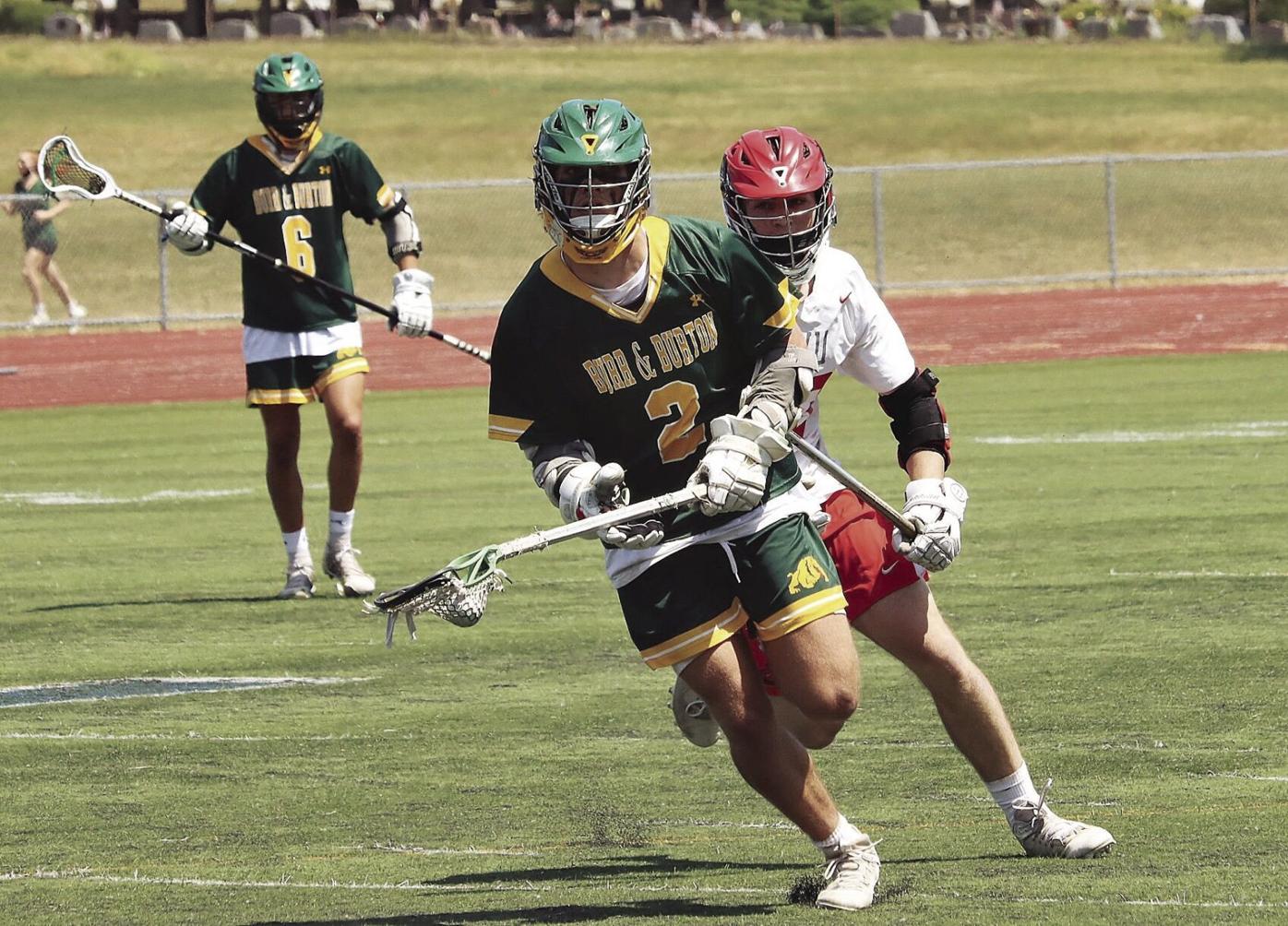 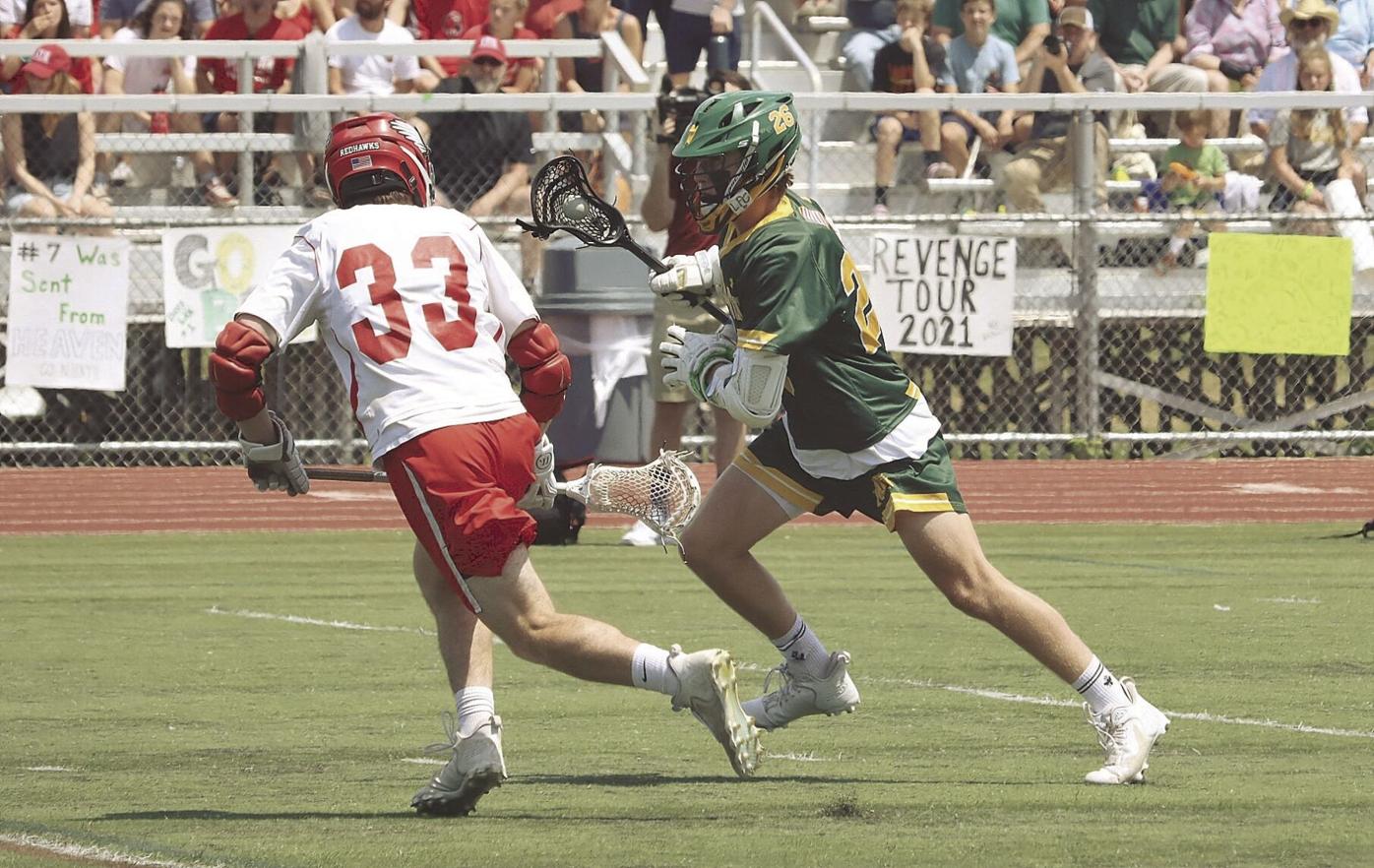 BBA’s Peyton Gray tries to get past CVU’s Seth Boffa during Saturday’s Division I final. 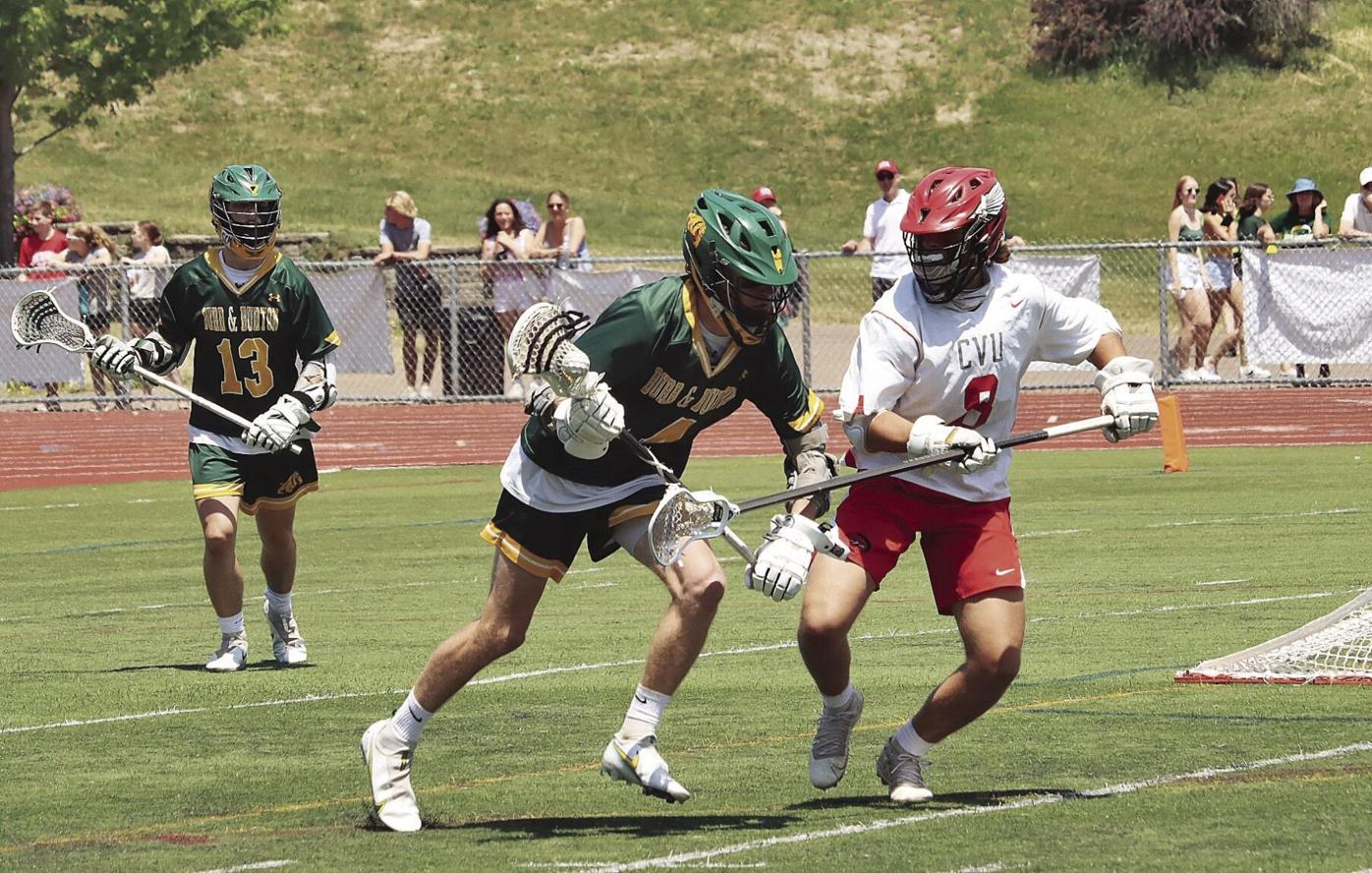 BBA’s Ryan Nolan wins the faceoff during Saturday’s final. Nolan won 14-of-17 during the game against CVU.

The Burr and Burton regroups during a timeout in the second half of Saturday’s final.

Burr and Burton fans cheer on the Bulldogs during Saturday’s Division I championship at Burlington High School.

Burr and Burton players celebrate after a first-half goal during Saturday’s Division I final.

BBA goalie Jack Morrison clears the ball during the first half of Saturday’s final.

BBA’s Nicky Miceli takes a shot at the goal during the first half of Saturday’s final.

BBA’s Peyton Gray tries to get past CVU’s Seth Boffa during Saturday’s Division I final.

BURLINGTON — A couple of minutes into the second half of the Division I boys lacrosse championship on Saturday, Nicky Miceli gave Burr and Burton a four-goal lead against annual powerhouse Champlain Valley.

But coming in, CVU was the seven-time defending champion, and wouldn’t take the deficit lightly.

CVU clawed its way back in, allowed only one other goal from the Bulldogs in the second half, and the RedHawks won its eighth straight Division I title with an 8-7 win over the Bulldogs, repeating a similar result from the 2019 final.

“It’s not the result we can here for, not the one we wanted,” said BBA coach Tom Grabher. “For the guys that were here two years ago and lost by one goal, that’s even tougher to swallow. I’m extremely proud of the passion and effort these guys put into it, not just this game, but all season.”

The beginning of the half started great for the Bulldogs. CVU won the faceoff, but the defense held firm for more than two minutes before forcing a turnover. Immediately, the offense came down and four passes later, Miceli made it 6-2.

“That was something we hadn’t done all year,” Grabher said. “We moved things around a little bit and we thought there was an opportunity for more of that here than in the past.”

Down four, CVU started to cut the lead. Senior attacker Shawn Gorman tallied a few minutes after Miceli’s goal and then with 4:57 left in the third, Colin Zouck chopped the deficit to 6-4 with a shot past BBA goalie Jack Morrison.

But for the rest of the quarter, BBA held and took a 6-4 lead to the final 12 minutes.

On a clear early in the fourth quarter, CVU was called for unnecessary roughness and BBA had a man-up penalty. CVU’s defense killed the penalty and only 44 seconds later, Alex Leonard rifled a shot through the defense to make it 6-5.

“Maybe we needed to be a little more careful with the ball to not give them all that time on offense,” Grabher said.

Leonard was the man on the spot about 90 seconds later in the next CVU possession, taking another right-handed speed shot to tie the game at 6-6 with 7:38 to go.

With 5:57 left in regulation, Nolan Shea gave CVU its first lead since early in the second quarter, 7-6. Now on the wrong side of the scoreboard, BBA looked for an answer, but CVU headed off chances at every turn, including a pair of saves from CVU goalie Jake Bowen.

As time ticked away, BBA was called for a penalty with 2:20 to go, putting CVU man-up. The RedHawks took advantage almost immediately, as Gorman scored off an assist by Leonard for an 8-6 lead.

With 1:09 left, CVU took a penalty and BBA tried desperately to come back. Out of a CVU timeout with 48 seconds left, BBA’s defense forced a turnover and Emmett Edwards went through the defense, grabbed a pass from Matt Grabher and scored with 22 seconds left.

On the following faceoff, two Bulldogs and two RedHawks battled for about 10 seconds before a BBA player gained possession with 12 seconds left. Coach Grabher called timeout to the bench official but the clock was stopped with only nine seconds left.

Grabher set up a play. Karter Noyes rushed down the middle of the field from the BBA side and got into the CVU zone but his pass was intercepted and CVU celebrated its eighth consecutive championship.

“I think that we’ve been doubted this whole season, but I think we proved that 2019 wasn’t a fluke year that we got [to the final],” said Duncan Chamberlain. “CVU has a hell of a program, you win eight straight, respect to them. I couldn’t have had a better senior season with these boys. I wish we could have won but I’m proud of every second of the season.”

The start of the game was tilted heavily toward CVU, as the RedHawks scored the only two goals of the first quarter. But that script flipped in the second, when Miceli scored the Bulldogs’ first goal 14 seconds into the quarter. Grabher scored the next with 9:20 left in the half to tie the game. The game was tied for the next eight minutes before BBA scored three to end the half.

Miceli moved through a crowd and scored with 1:49 left in the half, and after the score, a CVU player was called for a personal foul, giving BBA a man-up opportunity. They took advantage with Miceli again, assisted by Grabher, for a 4-2 lead. In the final seconds, BBA got the ball back and Emmett Edwards found Teddy Mirenda at the buzzer to give BBA a 5-2 lead and all the momentum heading into the second half.

“I think the first quarter, there were a little jitters and nerves, playing on the big stage here,” Grabher said. “There’s a number of guys who haven’t played on the big stage. But once we settled down and we started to play our game and that’s where we saw it start to go in our favor.”

“We are such a close-knit group and it makes it even harder because they feel for each other,” Grabher said. “To get [back] here, it’s just bitter that we weren’t able to hold on to [the lead] or find another goal.”

The Bulldogs will graduate five seniors — Duncan Chamberlain, Justin Fusco, Sean Lam, Ellery Stahler and Teddy Mirenda — but they leave a legacy that as a group went 40-16 in their four years. Chapin Eyre, the team manager, is also a senior.

“Duncan, Teddy and Justin were the three guys I had as freshman when I first started,” Grabher said. “And we were trying to change the culture here. Ellery jumped on the next year and Sean Lam this year. They jumped right into what we’re trying to accomplish here with changing the culture of BBA lacrosse and they were instrumental in doing that with their passion, commitment, dedication and effort. It’s tough to let them go, but I couldn’t be happier to have had those guys.”