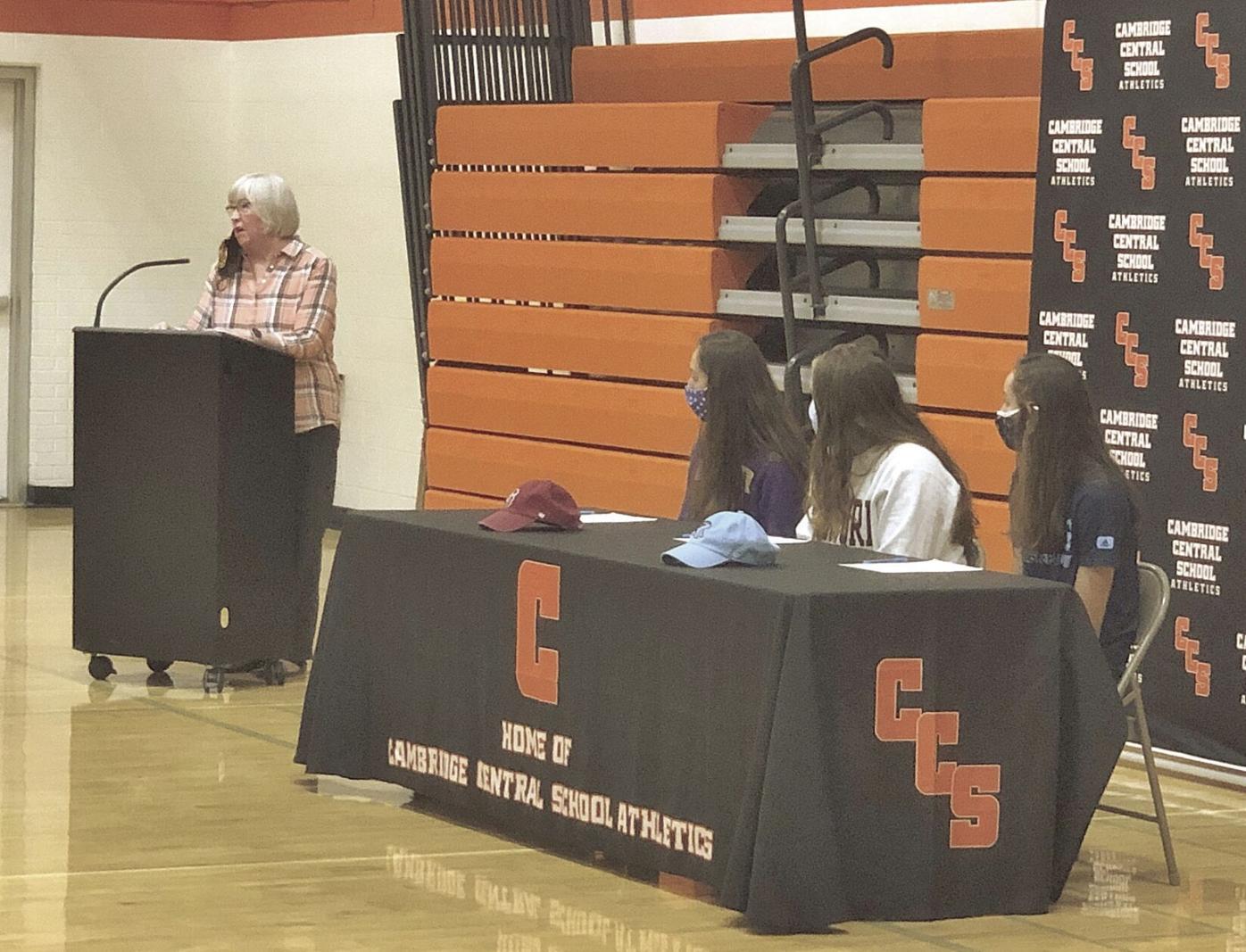 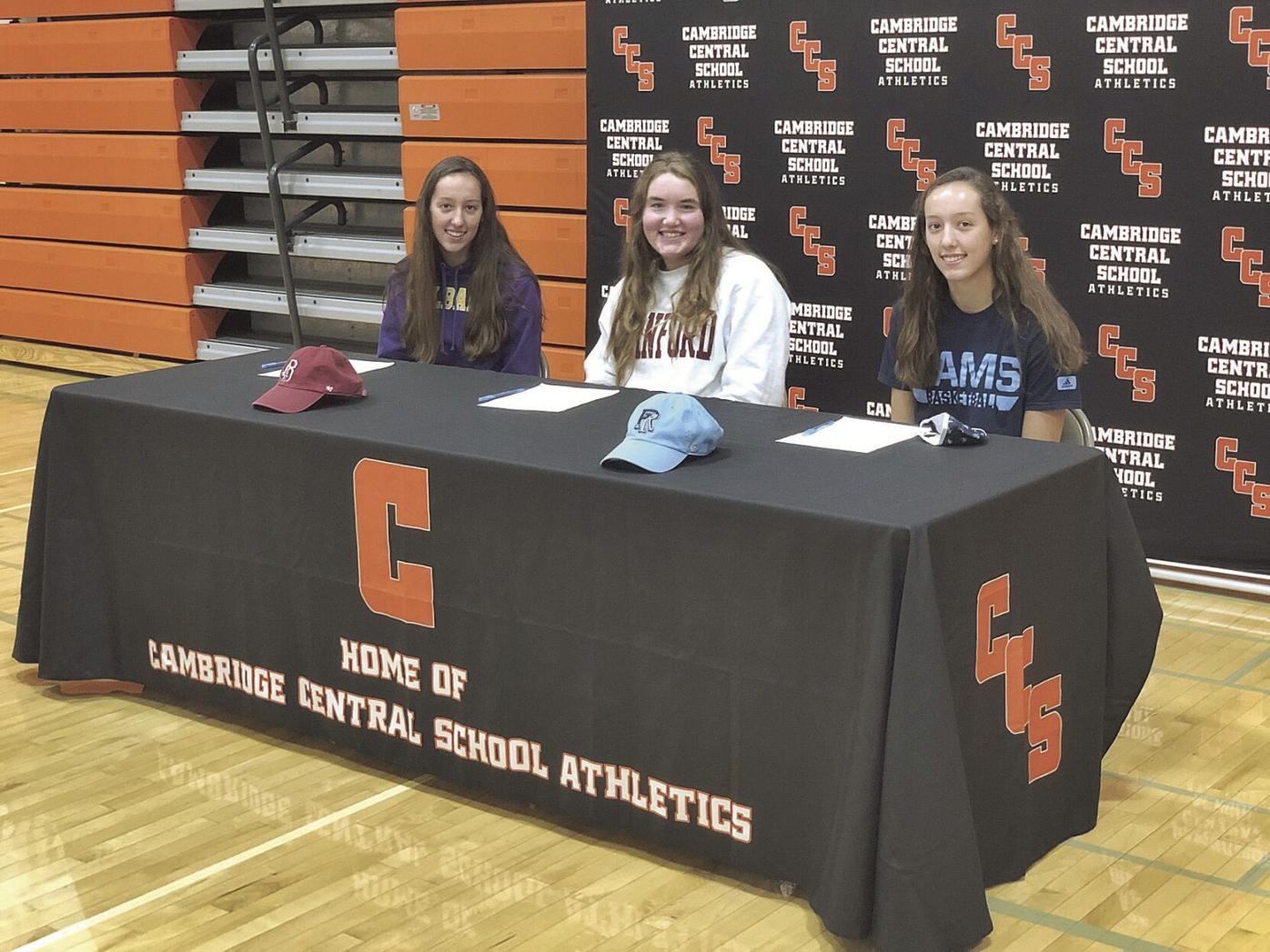 Cambridge’s Lilly Phillips, Fiona Mooney and Sophie Phillips all signed their national letter of intent to play Division I athletics this week.

Cambridge’s Lilly Phillips, Fiona Mooney and Sophie Phillips all signed their national letter of intent to play Division I athletics this week.

CAMBRIDGE, N.Y. — Three Cambridge Central School athletes made history on Wednesday, all signing their National Letter of Intent to compete in Division I athletics next year.

Fiona Mooney, a star basketball player in her own right for the Indians, signed her NLI to compete in crew at Stanford University in California.

On the first day of signings, the three made their college choices official with their families all in attendance at the CCS gym.

“It just means so much to us, especially being able to do this with our teammate Fiona and with all our teammates, coaches, friends and family,” said Sophie Phillips.

“It’s awesome that we got to do even with COVID going on, it’s good to get everyone together, and to do it now makes it just that much closer,” Lilly Phillips said.

Athletic director Deb Lauver said in her 30 years at Cambridge she doesn’t remember ever having a signing ceremony, especially not for three athletes going to attend Division I universities.

“Their hard work and dedication to athletics, but especially to the sport they love is beyond anything I have ever witnessed at CCS,” Lauver said during an introductory speech. “The amazing thing is that they are just as committed to their academics, school and community.”

Both Phillips sisters had a plethora of offers from Division I and Division II schools regionally, even a couple that were able to offer both sisters, but they decided in the end to split.

“i picked Rhode Island because I really liked the coaching staff,” Sophie Phillips said. “With Coach [Tammi] Reiss, I liked her style of play and I thought it would really challenge me. I liked the campus, it’s a good distance from home.”

For Lilly, the coaching staff, led by Colleen Mullen, was a good fit.

“The big thing for me was the coaching staff, and I liked the distance from home,” she said. “It’s far enough away that it’s away but also close so my family can come and support me. It was just a good fit.”

The college choices will separate the sisters for the first time on the basketball court.

“It will definitely be strange to be apart, but I think it’ll be a good experience,” Lilly Phillips said. “It will be something to get used to, but we’re both excited.”

As coach and Dad, Bob Phillips had an interesting wardrobe choice, a Rhode Island pullover shirt over a UAlbany T-shirt.

“It hits home that it’s official and all the hard work they’ve put in has paid off,” Bob Phillips said. “All of the coaches they’ve had over the years have helped them get to this point. It’s a proud feeling as a coach and as a dad.”

Mooney got involved with the sport of rowing between her freshman and sophomore years of school.

“She tried it and she really liked it,” said her father, John, after the ceremony. “She got involved with the Saratoga Rowing Association and really liked it. She loves being on the water and she seems to be a natural at it.”

Her parents said that the colleges started calling off the strength of her score on the rowing machine.

“She started to talk to the coaches last July and she saw three different schools until COVID hit,” John Mooney said. “She had a sense of what she was looking for in a school. She wanted an adventure and Stanford was a good fit for her academically.”

Through the SRA, Mooney competed at events in Massachusetts, Florida and even in Canada.

“The coaching at the SRA is really good and they are very connected,” said Fiona’s mom, Sarah Ashton. “Events at SRA are a big deal.”