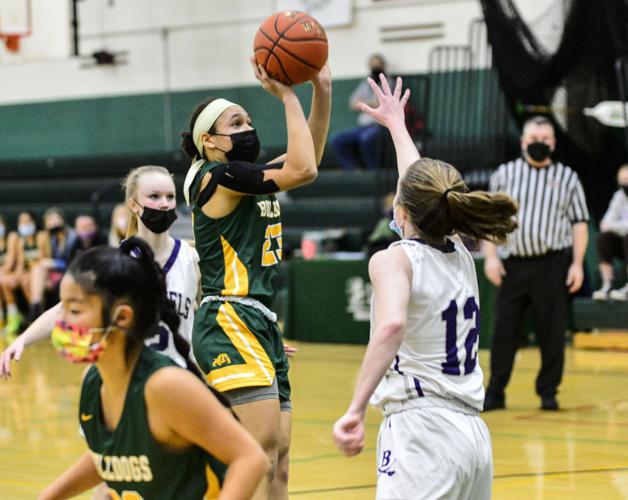 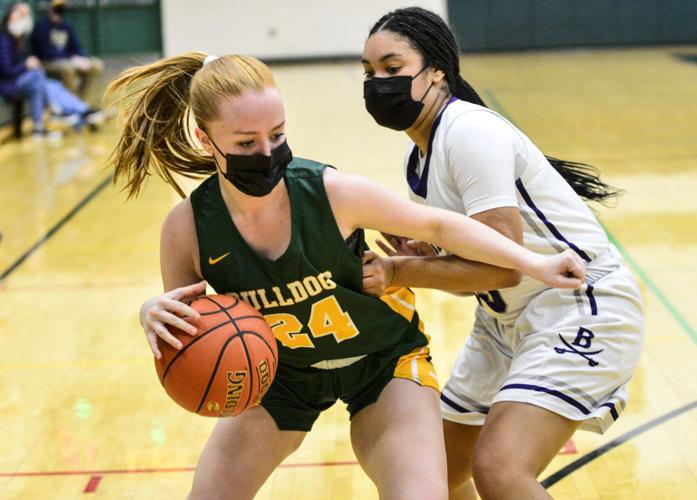 Burr & Burton’s Laurel Baker dribbles around a defender earlier this season. Baker made four 3-pointers in the first half of BBA's 51-30 win over rival Mount Anthony on Tuesday.

Burr & Burton’s Laurel Baker dribbles around a defender earlier this season. Baker made four 3-pointers in the first half of BBA's 51-30 win over rival Mount Anthony on Tuesday.

MANCHESTER — Familiar foes matched up again in a 3-point barrage that ended with a 51-30 Burr and Burton home win against rival Mount Anthony on Tuesday night. A large crowd and a vibrant student section got the Bulldogs rolling right from the jump.

BBA came out firing, knocking down four shots from deep to begin the game. It was Laurel Baker and Julia Decker that started with the hot hands, each of them shredding the net with a pair of threes, and before MAU could blink BBA jumped out to a 12-0 lead early.

MAU got on the board at the 3:45 mark, but BBA’s quick ball movement around the perimeter caused trouble for MAU’s zone defense.

At the start of the second, it was MAU’s bench that gave them life. After hitting her first three at the end of the first, Keely Greene dropped three 3-pointers and a long two in the second, and the Patriots started to gear up for a comeback.

But Baker had other ideas.

She continued her hot shooting night with two more makes from downtown in the second. Ainerose Souza matched her teammate and cashed in two of her own.

BBA looked poised even as Greene stepped on the gas and tried to carry her team back with her 11 point effort in the second quarter. Behind Souza and Baker’s 3-point barrage, the Bulldogs stretched the lead to 13 by halftime.

The break didn’t cool down the Bulldogs’ hot shooting night, as Souza buried another shot from deep early in the third, sending a signal that BBA wasn’t going anywhere.

Tough defense by the Bulldogs shut down any chances for a Patriot run, and at the end of the third the lead was stretched to 18 with a buzzer-beater three off the glass by Decker, her third of the game.

With the home crowd louder than ever, any momentum MAU had was snatched and the fourth quarter saw both teams just bleeding out the clock. BBA continued to hang tough and only allowed three points by MAU in the final eight minutes of play.

The Bulldogs have had an up and down season so far. They started the season 2-0, but between Dec. 16 and Jan. 20, lost 10 straight. On Saturday, they got back in the win column with a 59-20 win at Woodstock. Now they have strung together back-to-back wins for the first time in almost two months.

Mears says her team is dialed into the present.

“We’ve really just focussed on things that we can control.”

The best teams play their best as the season winds down and playoffs near. This two game BBA winning streak could be the start of a run. The Bulldogs are confident that they can compete with anyone in the state.

“We feel that if we can keep this momentum going that we can beat anyone.”

With a win against their rivals, BBA improves to 4-10 on the year as MAU drops to 1-9. With only six games left in the regular season, BBA looks ready to turn some heads.

The Patriots return to the court Friday at Kates Gym when they host Fair Haven. Tip off is scheduled for 7 p.m.