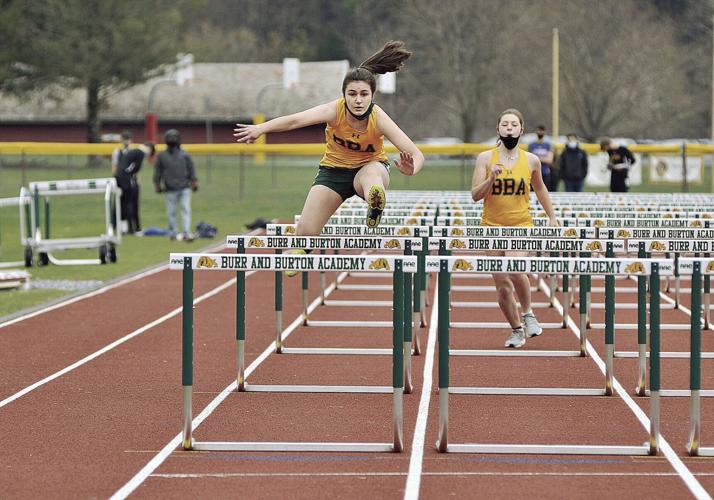 Burr and Burton’s Antonia Levitas competes in the girls 100-meter hurdles, followed by teammate Merritt Perkins, during a 2021 meet. 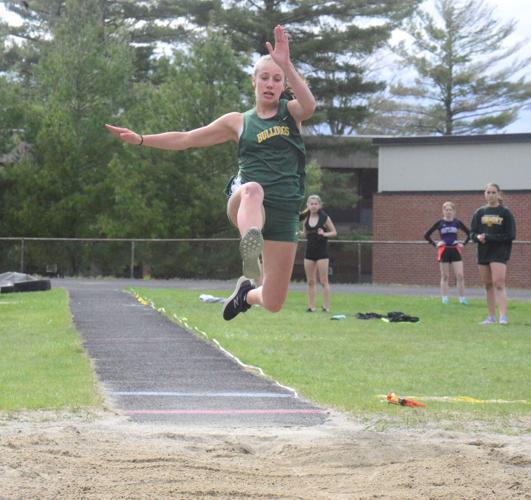 Burr and Burton sophomore Megan Carson competes in the long jump during a meet at Mount Anthony earlier this season.

Burr and Burton’s Antonia Levitas competes in the girls 100-meter hurdles, followed by teammate Merritt Perkins, during a 2021 meet.

Burr and Burton sophomore Megan Carson competes in the long jump during a meet at Mount Anthony earlier this season.

MANCHESTER — To run or to walk?

That’s the dilemma face by several seniors on the Burr and Burton track team after the recent announcement from the Vermont Principals’ Association that the Division II state track and field meet will take place June 3 at Burlington High School, the same day as BBA’s commencement.

The meet is scheduled to begin at 1:45 p.m., while the ceremonies in Manchester are set for 5 p.m., meaning the senior Bulldogs who have qualified to participate in the state meet — for many the final athletic event of their careers — will have to choose between graduating with their classmates or chasing one last state title.

“I think most of us seniors were pretty devastated. To work for something for the last four years, and not even get the chance to compete, was something we all saw as really unfortunate,” Cox said. “We know [BBA athletic director] Dave Miceli tried his best to change this date, but the VPA wasn’t willing to budge for just one school, so here we are.”

HOW WE GOT HEREU-32 was originally scheduled to host the Division II track meet on June 4. The school notified the Vermont Principals’ Association toward the end of March that it would not be able to host the meet because, its athletic director was leaving the school.

The association announced Burlington as the host site in early May.

BBA immediately voiced its concerns over the scheduling conflict upon the official release of the new date. The association looked at hosting the Division II meet in Manchester, but there were concerns whether there are enough officials in the south. The D-IV meet is being held in Manchester on June 3.

Another concern with Manchester hosting is the Equinox Youth Lacrosse shootout happening that weekend, traditionally held on Saturday and Sunday.

This year’s event is smaller with the events limited to Sunday, with Saturday a viable option to host the D-II meet.

Ultimately, the association gave the school the option to move up a division and compete in the D-I meet in Burlington on Saturday.

“The bottom line is we looked at about five different options. And what it came down to was Burr and Burton basically had two choices,” Johnson said. “Number one, they could choose to go on Friday, June 3 to Division II and it would mean that their seniors would not be able to participate. The second option, which is the option we favored, which came from the track committee, was that Burr and Burton could participate in the D-I track meet, which was being held on Saturday, June 4 at Burlington.”

Miceli notified the association roughly one week after the announcement that the Bulldogs were staying in the Division II meet. He worked with BBA track coach Caleb Wiley and the BBA administration.

“We tried to figure out what made sense for the greatest number of people,” Miceli said. “Changing divisions in the middle of the season is a big deal, and that didn’t really seem like a viable option.”

Of the roughly 10 seniors affected by the conflict, many didn’t have the times or distances necessary to compete in the D-I meet.

“It’s a lot to ask the athletes to make that shift,” Miceli said.

BBA feels like there were options left on the table to allow all of their student-athletes to attend both events.

“I do believe there were options to having the championship on Thursday, or starting at 9 a.m., instead of starting at 2:45, or flip flopping D-I and D-II.”

Johnson recognizes that BBA was placed in a no-win situation.

“It’s a horrible option, and I understand Burr and Burton is concerned about having to make that kind of decision, but nobody expected us to be in this situation. We thought we had it all covered until U-32 withdrew.”

It’s not necessarily a new issue for the association and member schools. A few years ago, Mount St. Joseph chose to move from Division IV to Division III once the school realized the D-IV meet was at the same time as graduation.

On the other hand, some track teams in Vermont have decided to skip graduation and compete in their normal division.

“North Country comes to my mind, because for a long time, North Country’s graduation was always on the same day that the state track meet was in place,” Johnson said.

Still, it forces the seniors to choose between their teammates and their classmates. Do they forfeit the opportunity to compete for a state championship, something they’ve been training day in and day out to achieve over the past few months? Or do they decide not to walk across the stage and miss out on celebrating their hard work and academic achievements over their high school careers?

Many Bulldogs have decided to skip the meet and attend their high school graduation, like senior captain Julia Brand. She said the decision “was not an easy process to have to experience.”

“As a captain, it was a very hard decision to have to make. I wanted to be there to support my teammates and help lead them, as well as perform myself,” Brand said. “With that being said, I had to take my family into perspective and what would be best for them. I felt very torn between the two most important things at the end of my senior year.”

It’s not the first time this BBA senior class will miss out on an opportunity to attend their state track meet, but this one stings a little more than the 2020 season, lost to the coronavirus.

“That’s been the biggest reaction from a lot of the seniors when they’re talking to me about it,” said coach Wiley. “They’re like, ‘we missed one and it was like it felt OK because everybody was on the same page and there were bigger things to worry about, but this feels more personal. It hurts more.’”

“This is a situation that they don’t have to be in if we can get enough adults to work together, and that’s frustrating.”