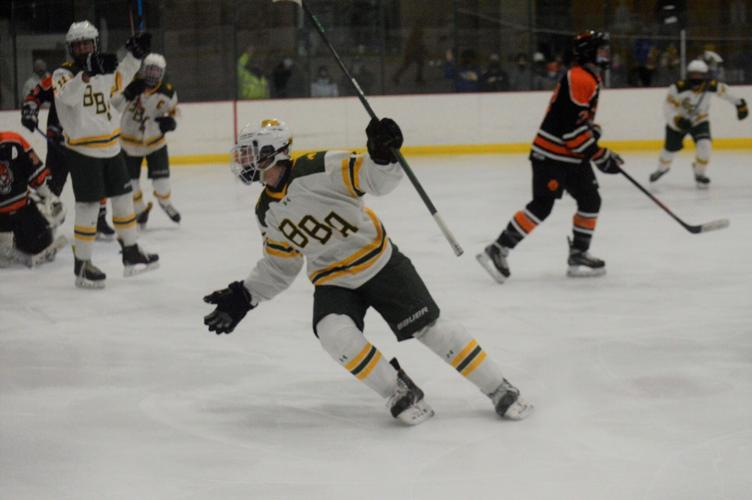 Burr and Burton's Karter Noyes celebrates his second period goal against Middlebury at Riley Rink during a recent game. 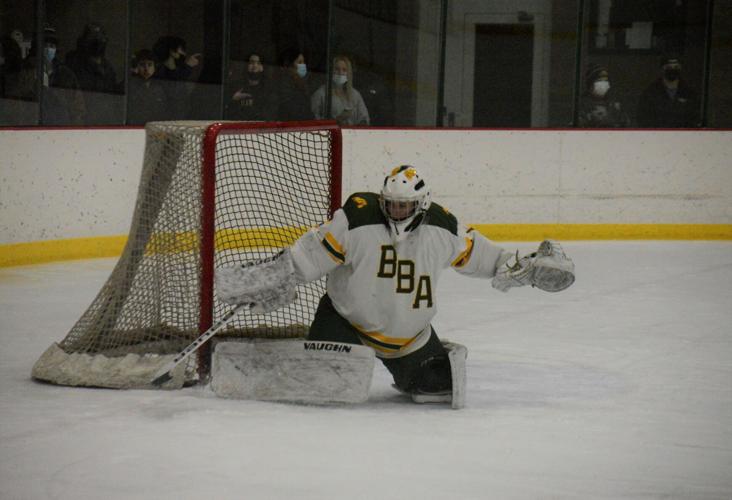 Bulldog goalie Michael Hornby makes one of his 13 saves. 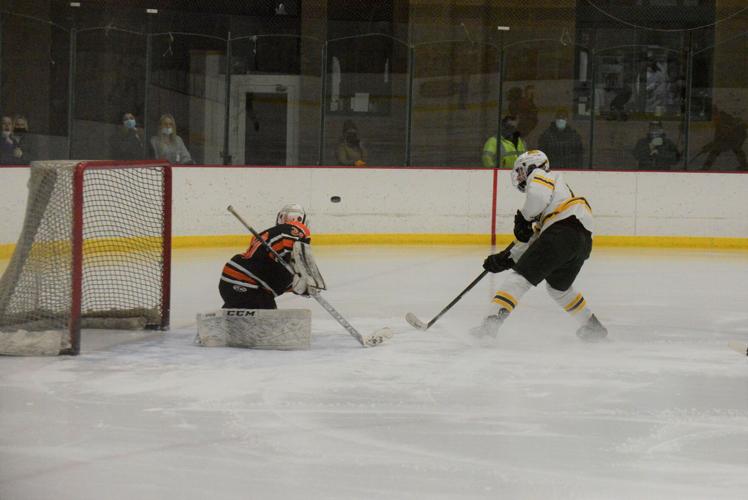 A Bulldog takes a shot while Middlebury goalie Eddie Hodde protects the net.

Burr and Burton's Karter Noyes celebrates his second period goal against Middlebury at Riley Rink during a recent game.

Bulldog goalie Michael Hornby makes one of his 13 saves.

A Bulldog takes a shot while Middlebury goalie Eddie Hodde protects the net.

MANCHESTER — Sometimes the name of the game is capitalizing on your opportunities. That’s exactly what the Burr and Burton hockey team did at Riley Rink on Wednesday night against Middlebury as the Bulldogs defeated the Tigers 6-1.

Ahead 2-0 in the opening second period, BBA was called for a hooking penalty. With the man advantage, Middlebury applied pressure on BBA’s end. Bulldog goalie Michael Hornby made a couple nice saves helping the Bulldogs kill the penalty.

Then it was BBA’s turn on the powerplay as Middlebury was called for interference at the 12:44 mark. They would not squander the advantage.

BBA showed great patience, passing the puck around the ice before identifying its opportunity and attacking. The initial shot was blocked by a Tiger defender, but Karter Noyes was there to possess the trickling puck near the Middlebury goal and flick it into the back of the net with 11:30 on the clock to build the Bulldogs’ lead to 3-0.

That sequence played a big part in dictating how the remaining 26 minutes on the ice went according to BBA coach Mark Slade.

“I’m a believer in momentum. And anytime you can kill a penalty, you gain momentum. And that rolls right into the next thing which was the power play; And we scored, again we gained momentum. The boys have been working hard and they did a real nice job tonight.”

The Bulldogs snatched the momentum and didn’t look back. Jack McCoy made it 4-0 a few minutes later. The BBA was in front of the net and secured a rebound, firing it into the back of the net.

Another powerplay opportunity for the Bulldogs turned into a 5-on-3 at the 4:09 mark of the period when Middlebury’s Matthew Kiernan was called for tripping. Fellow Tiger Jake Kadar was already in the box for the same offense.

BBA wasted little time making Middlebury pay for that one. McCoy found a cutting Max Brownlee’s stick, who tapped it past Middlebury goalie Eddie Hodde to grow the Bulldogs advantage to 5-0.

It was Brownlee’s second score and fifth point of the afternoon. His first came with 8:23 left in the first period, also on the powerplay. Matt Grabher and Noyes found him from behind the net to give the Bulldogs their first score of the game.

Brownlee assisted on the previous three Bulldog goals that he hadn’t scored himself.

Grabher put BBA ahead 2-0 in the final minute of the period on a breakaway score. His ability to set his teammates up for scores was once again on display Wednesday, assisting on three other goals.

A breakaway is what gave Middlebury its first goal of the contest, as Toby Draper beat the horn with six seconds left in the second period, putting a small blemish on an otherwise perfect period from BBA.

Noyes tallied his second score and only goal of the third period with 6:39 on the clock. McCoy and Emmett Edwards both assisted. Noyes finished with four points in the winning effort.

BBA improved to 6-7 with the win, arguably its biggest of the season.

Brownlee says the Bulldogs are focused on the present and finishing the year out strong.

“We’ve been struggling a little this year. We’ve had our ups and downs but I think this was a big win, big statement, and we’re ready for Burlington on Saturday.”

The Bulldogs hit the road for Saturday’s contest against the Seahorses. Puck drop is scheduled for 5 p.m.