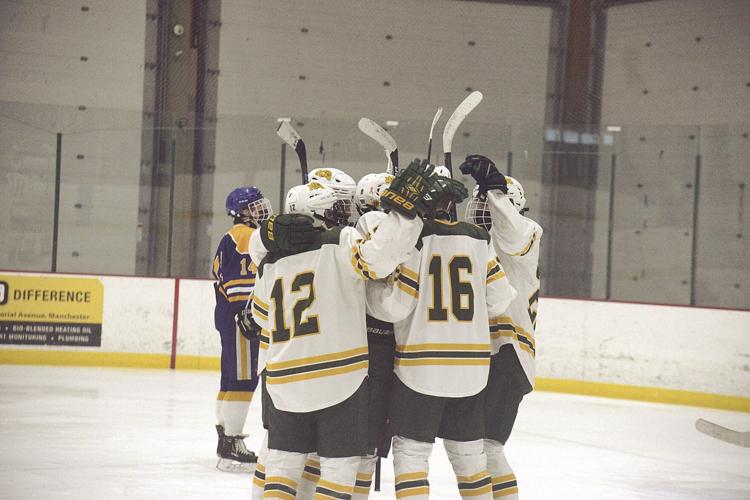 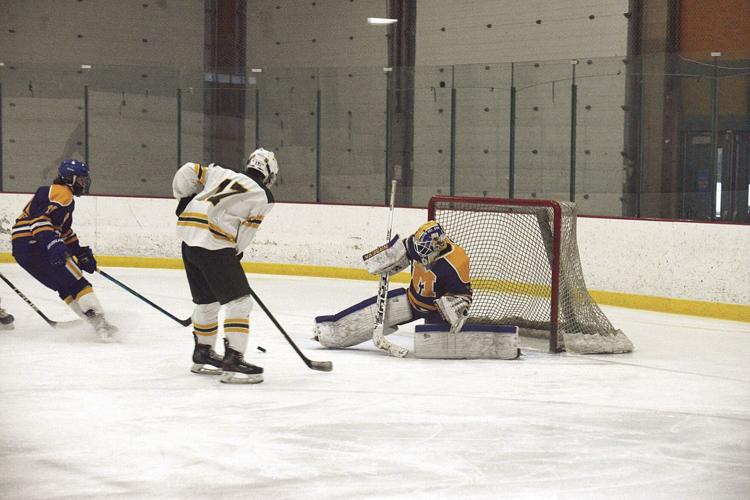 Burr and Burton’s Karter Noyes puts a shot on net during a game last season. Noyes scored two goals and added two assists in BBA's 5-1 win over Missiquoi on Wednesday at Riley Rink.

Burr and Burton’s Karter Noyes puts a shot on net during a game last season. Noyes scored two goals and added two assists in BBA's 5-1 win over Missiquoi on Wednesday at Riley Rink.

MANCHESTER — From the opening face off the puck bounced the Bulldogs way in a commanding victory, triumphing over the Missisquoi Valley Thunderbirds in a 5-1 thrashing at Riley Rink.

Karter Noyes’ impact was felt throughout as the Burr and Burton forward put two pucks in the back of the net and assisted on two more scores, continuing the senior’s strong season.

Noyes got things started for BBA at the 14 minute mark of the first period, sending a pop to the back of the net to give the Bulldogs a lead they would not relinquish.

Two Bulldogs, Matthew Grabher and Max Brownlee, assisted on the play and pushed BBA out on the right skate. They would not look back.

The Bulldogs were clicking on all cylinders Wednesday night. They were called for four penalties in the match, but killed each one.

Missisquoi Valley goalie Garrett Fregeau kept his team in the game for some time with a couple crucial saves early. But as BBA continued to get clean looks and pepper the goal, they were due for a shot to hit the back of the net.

At the 10:18 mark in the second period Noyes struck again, punching one to the back of the net off a second assist by Grabher and Emmett Edwards’ first of the night.

The score left BBA wanting more and 14 seconds later, they struck again. This time it was Noyes on the assist and Edwards got goal number one.

Late in the second period and trailing 3-0, Missisquoi Valley got its fourth and final power play of the evening. It was once again killed with few shot attempts as the Bulldog defense stifled their opponents.

After the kill, the Thunderbirds were able to get on the board with a shot and score by junior forward Dalton Laplant, assisted by Logan Porter. As the second period came to a close there was still hope for a Missisquoi Valley comeback as the visitors trimmed its deficit to two goals, 3-1.

The third period was a constant change of possession early on. A couple icings by Missisquoi Valley put BBA in the zone but they weren’t able to finish.

With the game still in striking distance for the Thunderbirds, the Bulldogs needed one more score to really seal the deal. That goal came late in the period at the 5:11 point on a deep shot by defensemen Jack McCoy assisted by Max Brownlee. And if that wasn’t enough, BBA scored again 42 seconds later, as forward Adam Murnaghan got onto the scorer’s sheet on a second assist by Noyes.

After the game head coach Mark Slade was excited about the victory but remained humble, mentioning, “It’s one game at a time.”.

“The boys are bringing it together, we’re finding our stride. We got a great leadership group and they’re doing their part.”

BBA’s campaign improves to 5-6 on the season as Missisquoi Valley drops to 1-8.