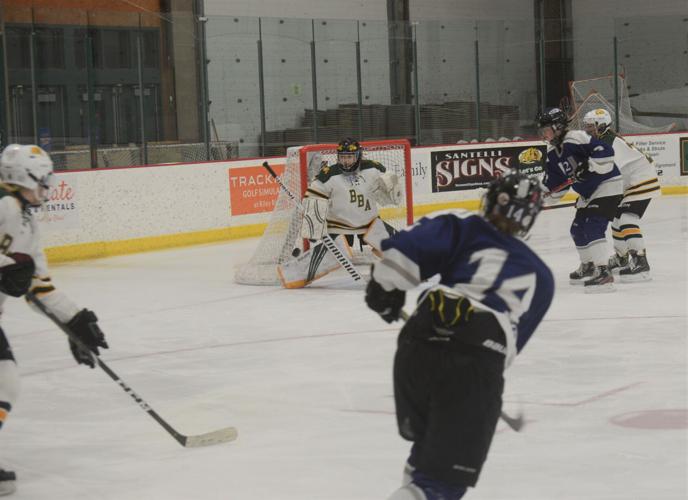 Burr and Burton goaltender Cyra Pacher makes a save on a shot attempt from U-32's Caitlyn Fielder during Wednesday's game at Riley Rink. 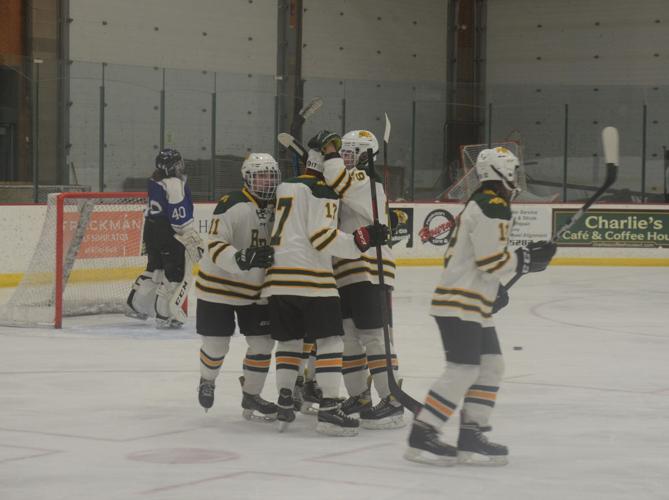 Teammates surround Abby Kopeck after her first period goal against U-32 Wednesday afternoon at Riley Rink.

Burr and Burton goaltender Cyra Pacher makes a save on a shot attempt from U-32's Caitlyn Fielder during Wednesday's game at Riley Rink.

Teammates surround Abby Kopeck after her first period goal against U-32 Wednesday afternoon at Riley Rink.

MANCHESTER — From its season-opener on Dec. 10 up until Jan. 7, all Burr and Burton girls hockey knew was winning.

The Bulldogs raced out to a 6-0-0 start to their 2022-2023 regular season, outscoring their opponents 29-5 during that stretch. In the previous three games leading up to Wednesday’s tilt at Riley Rink against U-32, BBA hadn’t recorded a win – going 0-1-2 in the past 11 days with a couple of hard fought ties against Rice and Missisquoi, respectively and a 6-1 defeat at the hands of Mount Mansfield/CVU during a grueling three game road trip.

The Bulldogs got back on track against the Raiders, securing a 3-0 win.

The opening minutes were relatively quiet, with neither side registering a shot until the 10:56 mark of the first period.

That’s when the puck found Bulldogs junior captain Abby Kopeck near center ice and the BBA forward capitalized on the opportunity. She slapped a shot toward Raiders goalie Adelaide Croteau, who initially stopped the puck but wasn’t able to cover it up as it rolled slowly behind her for the game's opening score.

Then, BBA added an insurance goal at the midway point of the second period when Kaelin Downey poked in a rebound off her own shot. Downey originally tested Croteau near center ice. The U-32 keeper deflected the shots off her pads, but Downey tracked the puck perfectly and was there to poke in the score while hugging the left post.

The third and final score came in the third period, as Mia Paligo found the top shelf with 5:59 remaining in the contest.

Downey assisted on two scores for a three point night, while Mai-Liis Edwards added an assist, too.

BBA coach Ed Lewicki was pleased with what he saw on the ice Wednesday night.

“I’m really proud of the way the girls came to play today,” he said.

BBA won via a shutout for the third time this season, as goalkeeper Cyra Pacher stopped all 11 shots that neared the Bulldogs net. The junior has shown great improvement in her second year as starting goalie.

“I am beyond pleasantly surprised with her play,” Lewicki said. “She worked at it, too. It’s an example of a kid who wants to get better. She’s been working at it every day. She went to some goalie camps.”

The Bulldogs were without starting sophomore forward Kaya Pedersen, who missed the game with an illness.

“I’ve been doing this a long time, 13th year,” Lewicki said. “The junior class this year, along with some of the sophomore and freshman, they wanted to come in and work hard. The practices have been better, the effort’s been better – I’m so proud of where we are now.”

The first period was stopped for roughly 10 minutes as U-32 freshman forward Emily Tringe remained down on the ice after a play near the BBA net. Three people attended to the Raider, who eventually was helped off the ice under her own power. Tringe was able to return to play by the beginning of the second period.

The BBA boys hosted Missisquoi immediately following the game. Both contests were dedicated to hope happens here, a mental health awareness organization, a "movement dedicated to removing the stigma of mental health issues on college campus, according to its website.