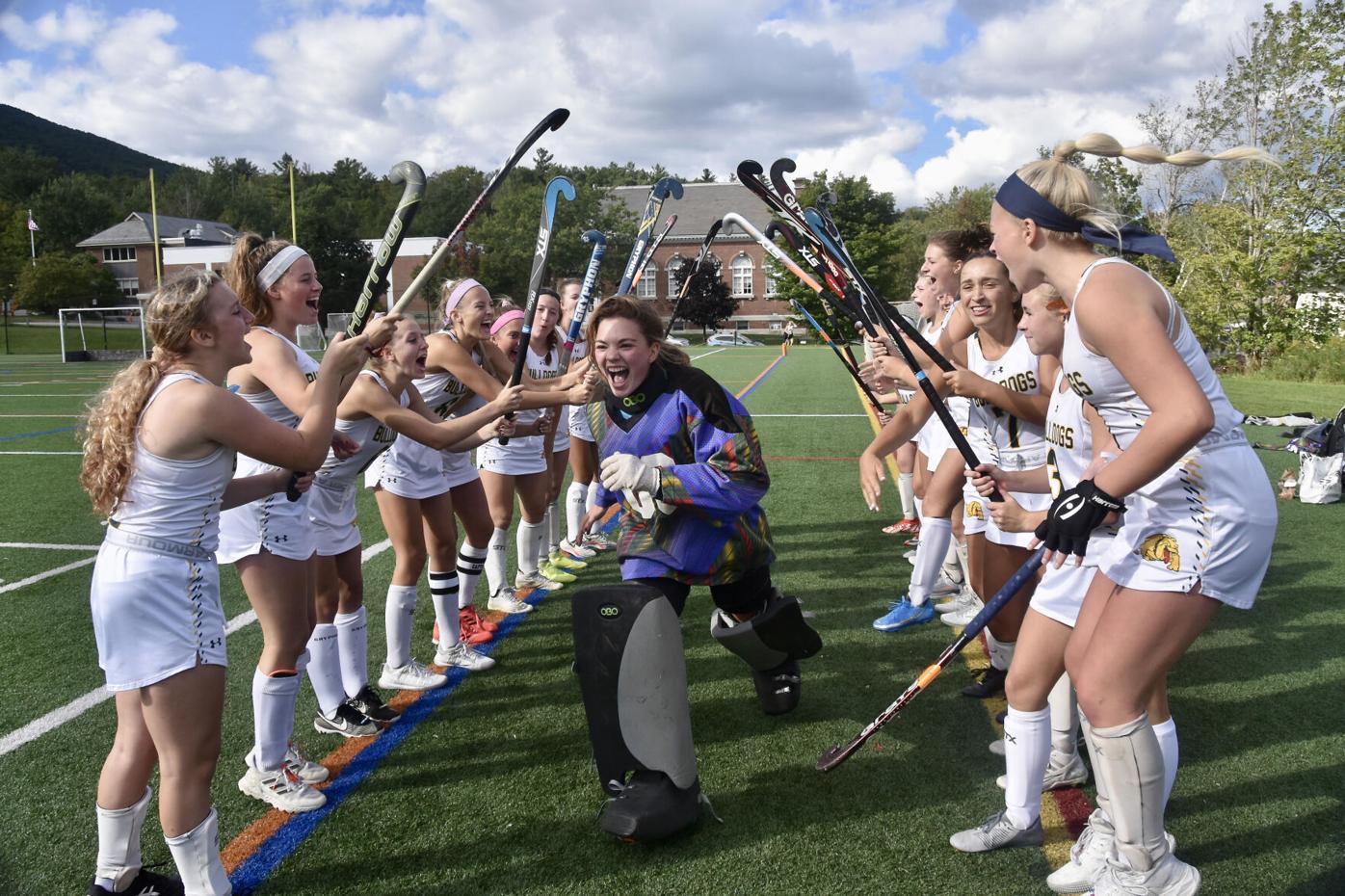 BBA goalie Mac Thuermer is announced as a starter prior to Tuesday's game in Manchester versus Queensbury. 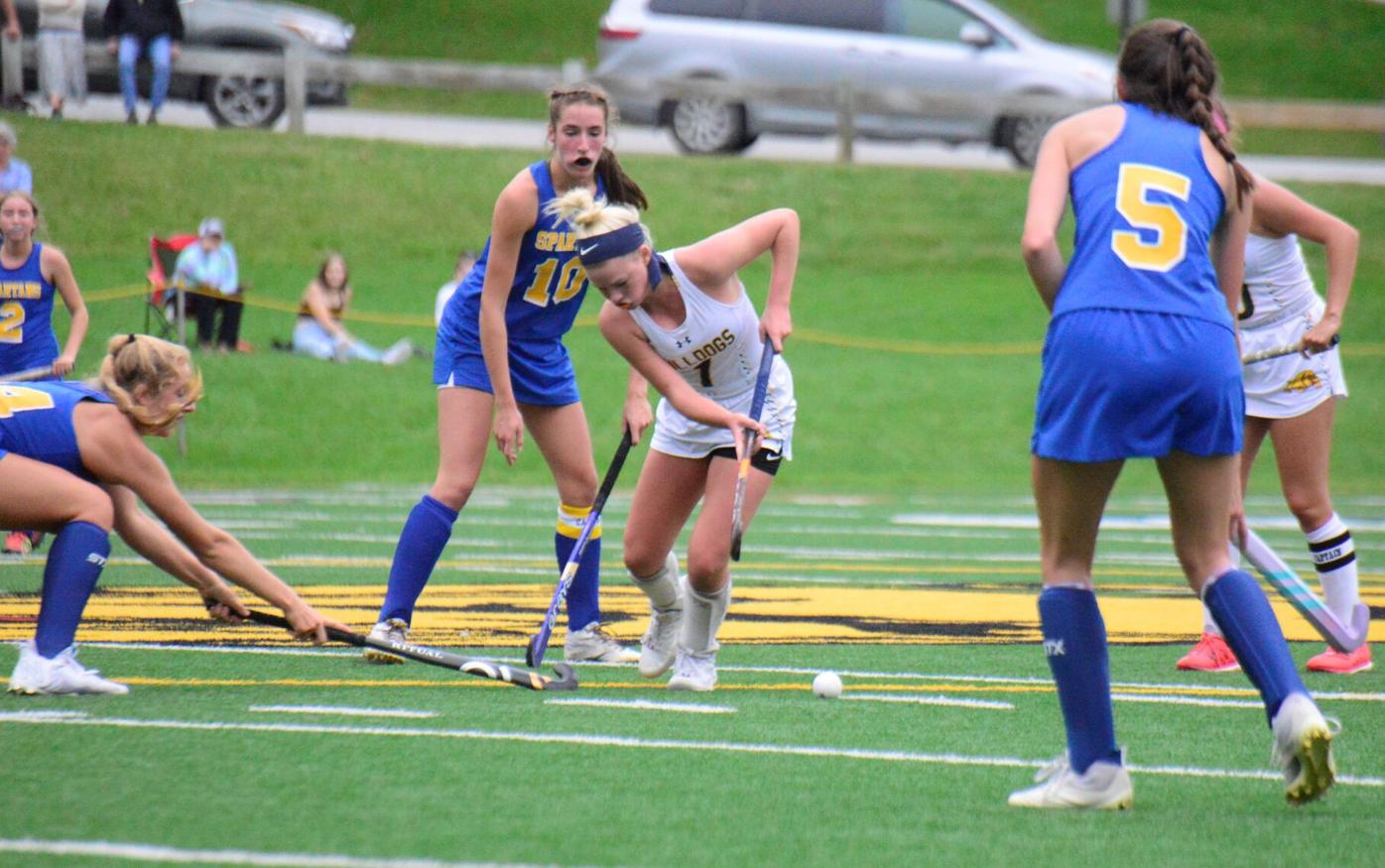 BBA goalie Mac Thuermer is announced as a starter prior to Tuesday's game in Manchester versus Queensbury.

MANCHESTER — Burr and Burton field hockey has been battle tested through its first three games of the season.

The Bulldogs began their season on the road against the 2020 Division I runner-up in Champlain Valley, losing that contest 3-0. They followed that with a quality 3-1 win over a strong Windsor squad.

The schedule didn’t get any easier on Tuesday, facing a Queensbury team with a stout defense. Queesnbury etched out a 3-1 win over the Bulldogs in a game where both defenses shined.

A scoreless first quarter favored the Spartans, as they held the shot advantage and overall time of possession. The Bulldogs didn’t even register their first shot of the game until the 1:30 mark in the first quarter.

Queensbury broke the scoring drought with 10 minutes and 50 seconds left in the first half. A group of Spartans congested in front of the cage off a corner. A battle for possession was eventually won by Queensbury, who snuck it in the back of the cage for the 1-0 advantage.

The visitors added another score four minutes later. BBA goalie Mac Thuermer stopped the first and second shot attempts, kicking the ball away from the cage. Queesnbury stayed persistent, and with Thuermer slightly drawn out of the cage, a rebound found the stick of a Spartan who converted the goal.

The Bulldogs fall to 1-2 early in the season, but coach Barb Miceli believes playing quality teams will prove more beneficial to her team rather than gaining points for seeding purposes.

“Ultimately, what’s more important is to play tough teams because it improves us,” Miceli said. “The improvement that I saw from the first half to the second half — and the mental toughness that they had to persevere and keep going and that second half — I think is worth it.”

The Bulldogs found their initial groove with four minutes remaining in the second quarter. Up until that point, they still only registered one shot. BBA rattled off four shots during one possession, earning its first corner of the game during that stretch.

Campbell Snow, guarding the cage for the Spartans, stayed solid and kept BBA off the board for the time being. Snow tallied five saves in the win.

That momentum carried into the second half. With two minutes left in the third quarter, Lili Zens started a fast break in the middle of the field. It was one of the Bulldogs better offensive opportunities of the match. A Spartan eventually halted the break, but BBA was awarded a corner.

The Spartans quickly dismissed the scoring opportunity, clearing the ball away from their cage.

Queensbury’s offense continued to pressure Theurmer at times. With just under 11 minutes left in the fourth quarter, the BBA goalie made a kick save. Queensbury’s Alessia Simone was there for the rebound and score, giving the visitors a 3-0 lead.

Thuermer was busy all afternoon, with 19 saves in the loss.

Bailey Gillam and Jenna Parker had strong games defensively for the Bulldogs. Miceli praised the energy both defenders brought on Tuesday.

BBA never quit and with 5:14 left that persistence led to a score. Katie Crabtree found the back of the cage for the Bulldogs, making it a 3-1 game.

That would be the final score. Queensbury appeared to have a great opportunity to add a fourth goal off a corner, but Perrin Marion stepped in and cleared the threat.

BBA returns to play on Saturday, when they host St. Johnsbury at 3 p.m.