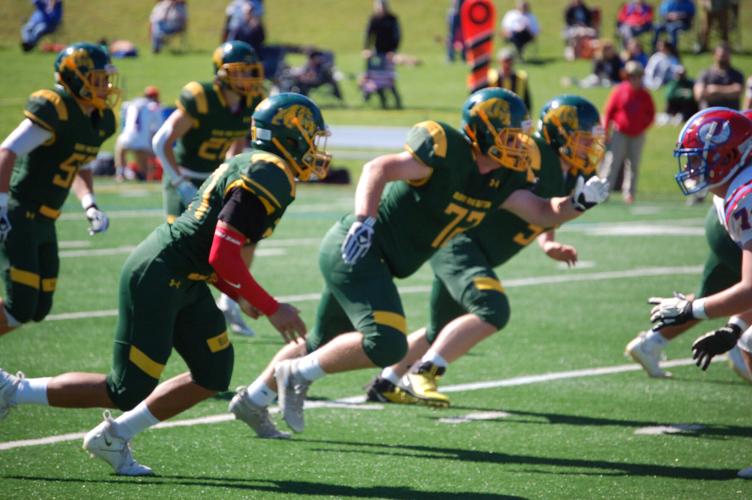 The BBA defensive line fires out against Hartford on Saturday 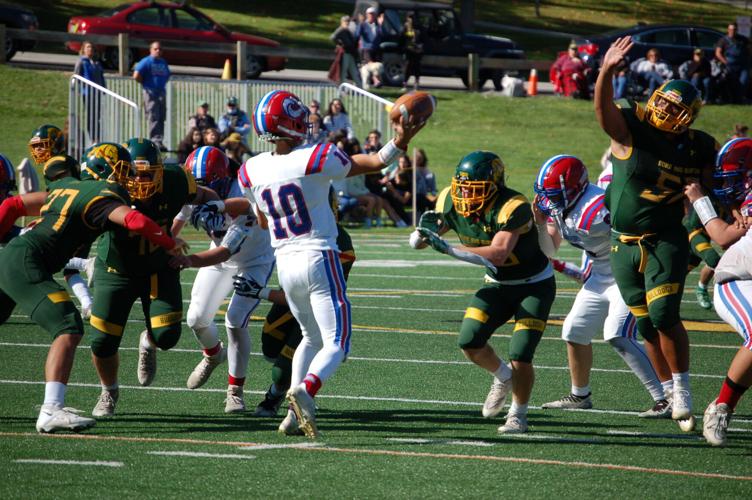 BBA's Daniel Spencer jumps to bat down a Hartford pass during Saturday's win over Hartford. 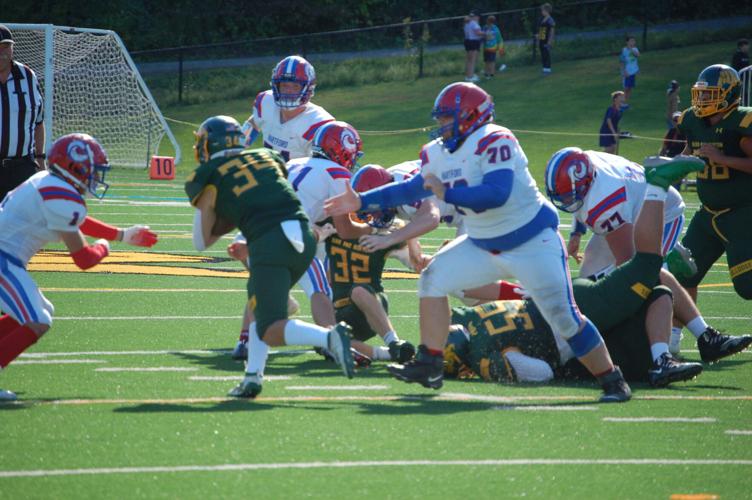 Quarterback Jack McCoy (#34) carries late in the game against Hartford. 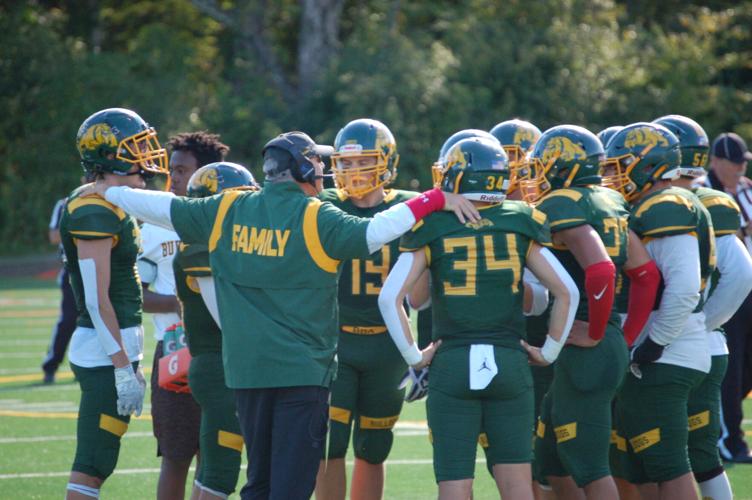 Coach Tom McCoy talks things over during a timeout during the homecoming game against Hartford.

The BBA defensive line fires out against Hartford on Saturday

BBA's Daniel Spencer jumps to bat down a Hartford pass during Saturday's win over Hartford.

Quarterback Jack McCoy (#34) carries late in the game against Hartford.

Coach Tom McCoy talks things over during a timeout during the homecoming game against Hartford.

MANCHESTER — It wasn’t as pretty as it’s been in Burr and Burton’s recent dominant wins, but sometimes you have to win ugly. That’s just what the Bulldogs did in their 24-14 homecoming game win over the Hartford Hurricanes on Saturday.

Michael Crabtree did a little bit of everything for the Bulldogs in the hard-fought victory. He had a workmanlike 17 carries for 82 yards on the ground, a 49-yard touchdown on a halfback pass. Defensively, his fourth-quarter interception in the end zone stymied a Hartford comeback bid and all but sealed the victory.

“That kid’s got more heart than any I’ve ever coached,” said head coach Tom McCoy of his senior captain. “I just love having him on the team. He’s a great leader and he makes everybody around him better.”

BBA found itself trailing for the first time all season after Hartford forced a three-and-out on the game’s opening drive and took over with excellent field position at the Bulldogs’ 34. Seven plays later, Hartford’s Evan Lynds got behind the defense and Brayden Trombly found him for a 29-yard score.

Penalties were a prevailing theme for both teams. Hartford was flagged eight times for 75 yards while BBA racked up 80 yards of infractions of their own.

Hartford seemed poised to add to the early lead in the first quarter. A personal foul for unnecessary roughness against BBA led to a second straight three-and-out.

Hartford was hit with its own personal foul on the ensuing drive for one of several “blindside blocks” in the game and ended up with a third-and-17. With Hartford forced to throw, defensive back Conor McMahon made a leaping interception for BBA at midfield, and momentum began to shift.

Two plays later, BBA took advantage of the Hartford defense’s aggression. Crabtree took a pitch right and every white jersey on the field rallied up to tackle him. Crabtree pulled up and lobbed the ball downfield to Trevor Greene, who didn’t have a Hartford defender within 10 yards of him. Greene raced the rest of the way to the end zone to even up the score.

BBA took the lead on their next series, a 12-play drive that took over six minutes. It started in style with a catch-of-the-year candidate by McMahon, who leaped over a Hartford defender’s back and plucked it from his grasp, not only preventing a likely interception, but gaining 35 yards in the process.

Quarterback Jack McCoy (8-15, 127 yards) found Crabtree for 13 yards on a screen pass and a key third down conversion, and then scrambled on a fourth-and-19 to hit Greene, who tapped his toes just inside the right sideline for 25 yards and a first-and-goal from the three. Three plays later, Crabtree was rewarded for his tough sledding against the physical Hurricane defense with a two-yard touchdown run.

Taking over once more before the half at their own 42 with just 1:24 left in the half, the Bulldogs executed a textbook two-minute drill that included a hook-and-ladder from McMahon to Crabtree. The trickery netted the Bulldogs about an extra 10 yards before Crabtree wisely got out of bounds at the 21. After a couple of unsuccessful shots to the end zone, junior Seb Dostal came on to punctuate the drive with a 38-yard field goal as time expired for a 17-7 halftime lead.

Dostal didn’t start off the second half quite as well, booting the opening kickoff out of bounds. Hartford would regret their decision to make the Bulldogs re-kick. Rather than kicking it deep again, Coach McCoy opted to go with an onside kick on the second try. Dostal placed the kick beautifully, and Nate Smilko fell on the ball to put the Bulldogs offense right back in business at the Hartford 43.

“I figured they were going to get halfway decent field position anyway, so we took a shot and it worked out. A lot of it is just luck, too,” said McCoy of the decision. “But those are things we work on. We put a lot of time into those things like pooching the ball, field goal, extra point…”

Seven plays later, McCoy found Greene on a jump ball in the back right corner of the end zone from six yards out. Greene’s second score of the game made it 24-7.

Hartford went down swinging, though. On a fourth-and-3 just before the end of the the third quarter, Trenton Bird would rumble 35 yards for a touchdown to bring the Hurricanes back within two scores.

When BBA’s next drive stalled, Dostal pinned the Hurricanes inside their own 20 with a good punt. Hartford ripped off several chunk plays on its best sustained drive of the day, reaching the Bulldogs 10 and threatening to make things interesting. That is, until Crabtree slammed the door with his interception in the end zone.

“I was really proud of how our defense played today,” said McCoy. “I thought they played a really good football game. To hold that team to 14 points, I think was impressive”

BBA improves to 4-0. They’ll make the trek to the Northeast Kingdom for a matchup with St. Johnsbury this Friday at 7 p.m. Hartford falls to 2-2. They’ll be at CVU next Saturday at 1 p.m.

Football report card: Burr and Burton atop Division I at the halfway point of season

The Bulldogs are one of four undefeated teams prior to Week 5 kicking off. Facing a grueling Division I schedule week in and week out, they ha…