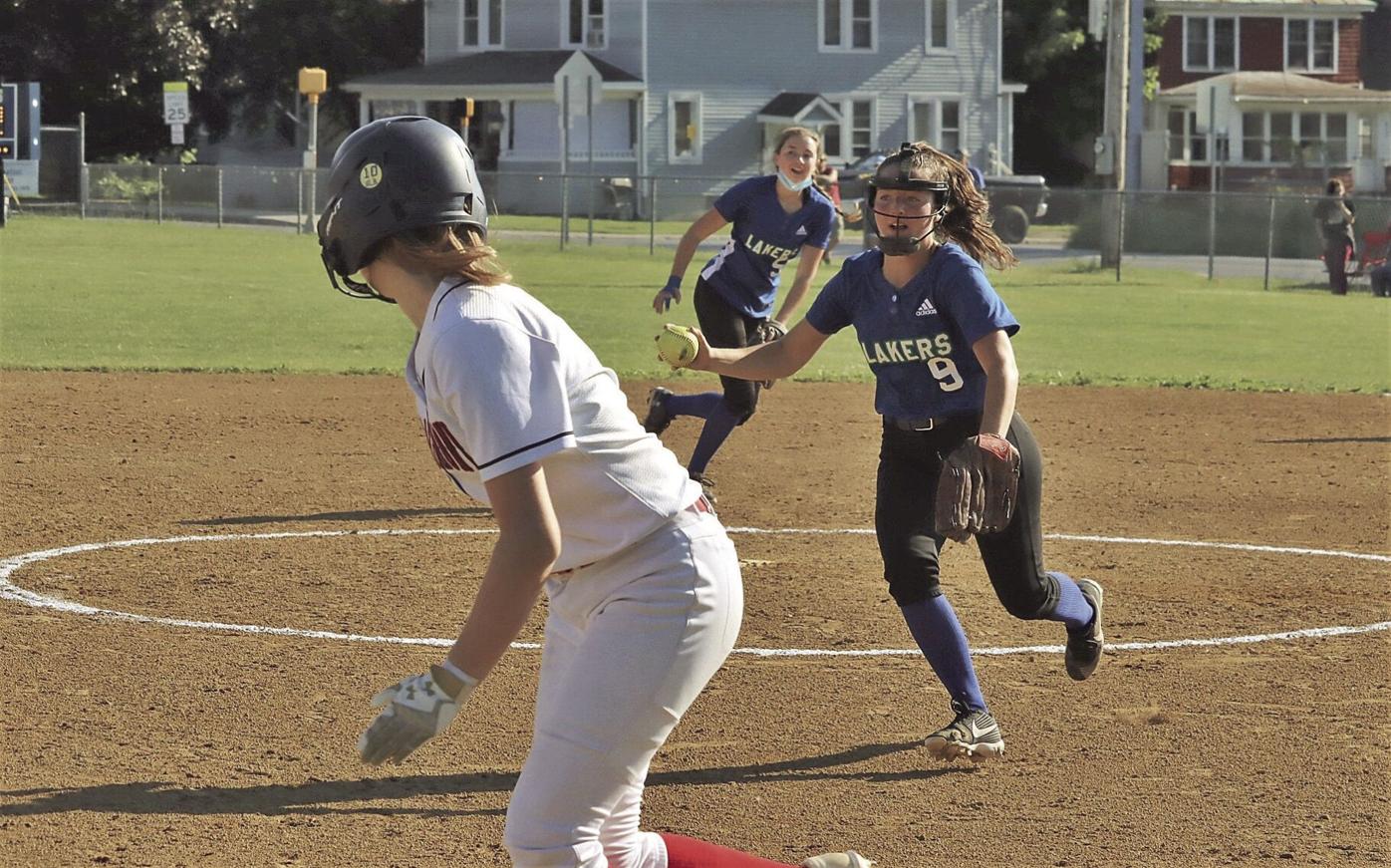 Colchester pitcher Chloe Palmer runs back Mount Anthony's Autumn Hayes during a play in the sixth inning of Friday's 5-2 win. 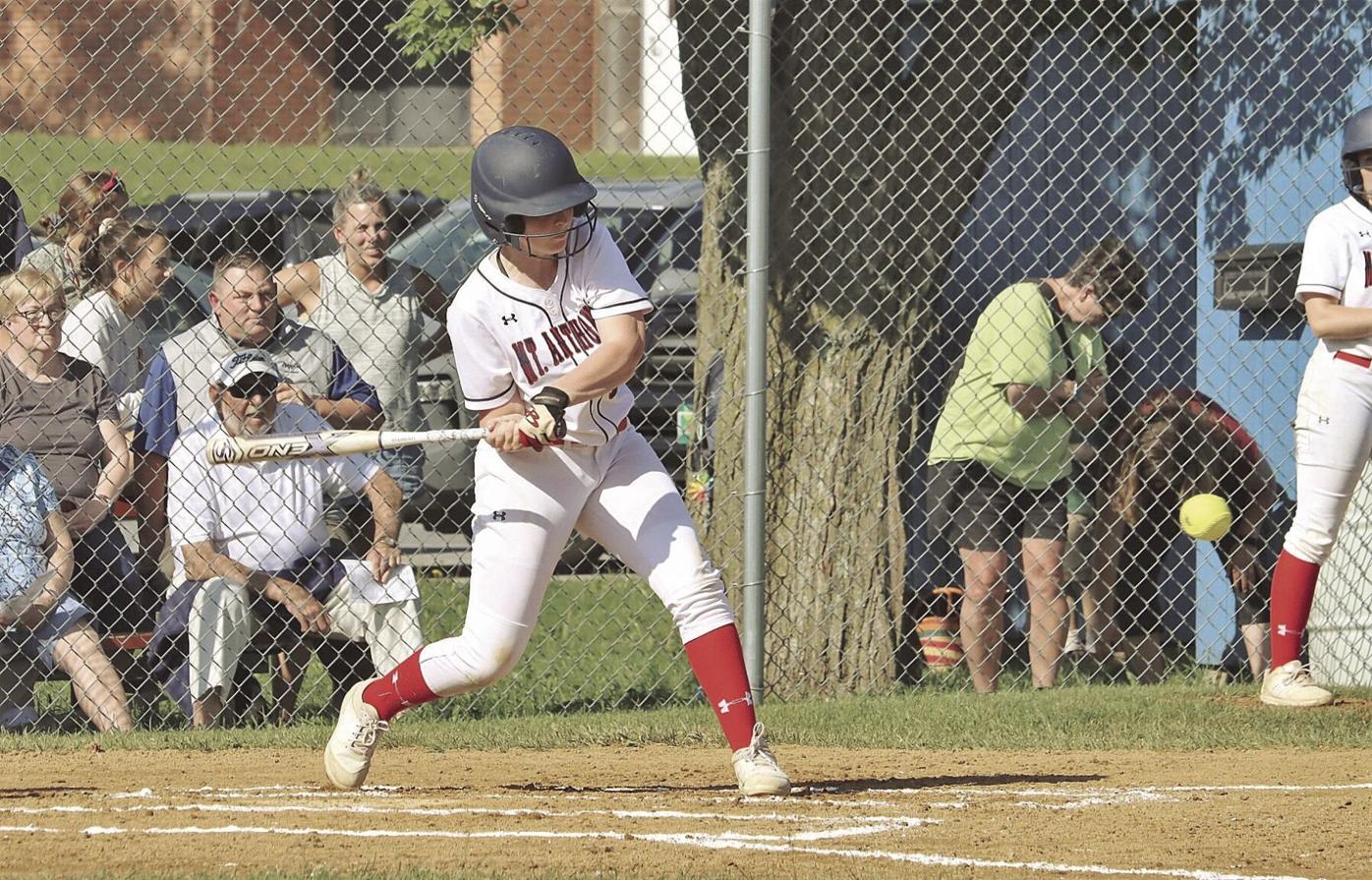 Mia Paligo hits a double to lead off the third inning during Friday’s 5-2 win over Colchester. 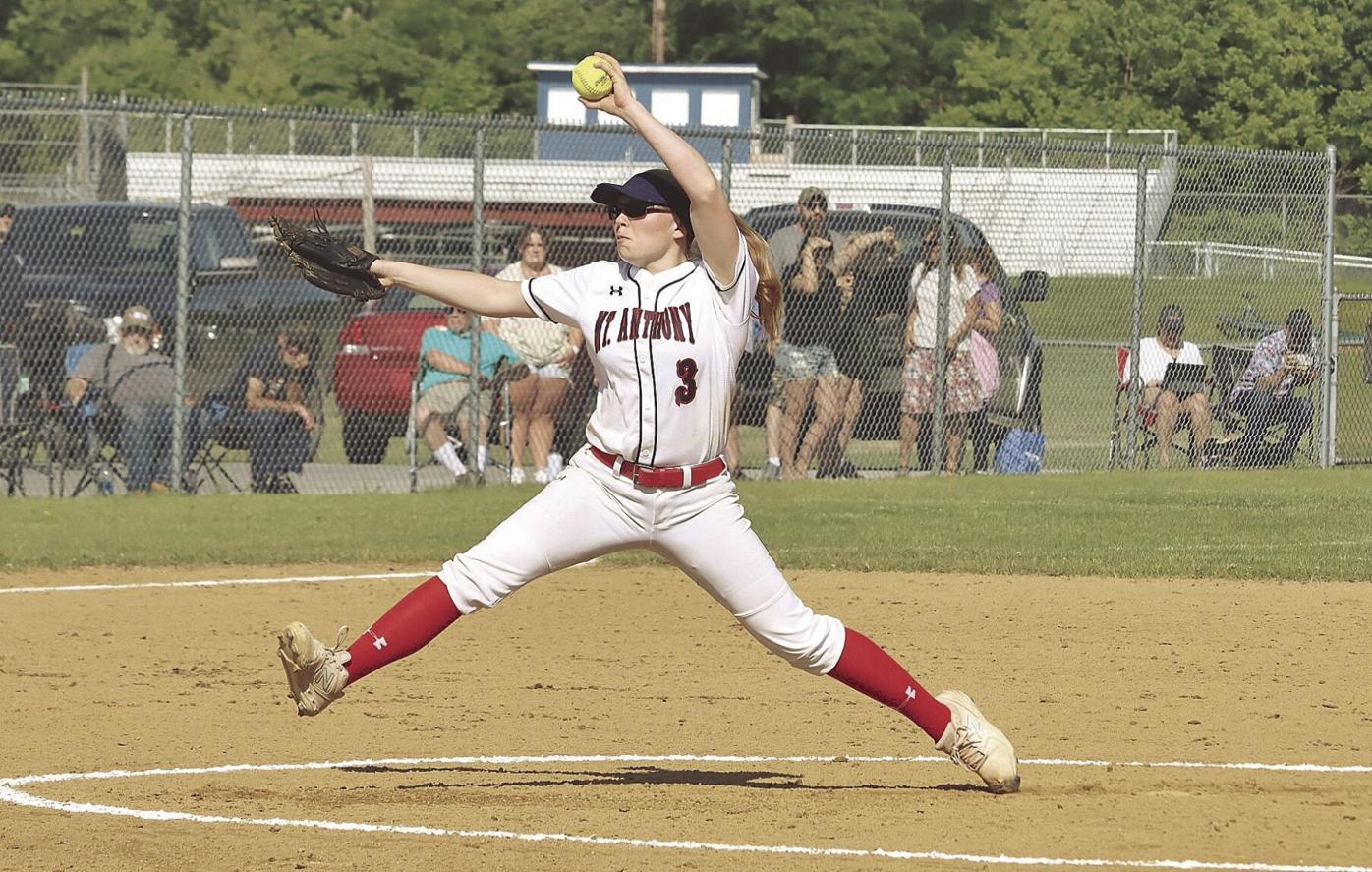 Sofia Berryhill throws a pitch in the third inning of Friday's 5-2 win over Colchester. Berryhill struck out a school-record 17 Lakers in the victory. 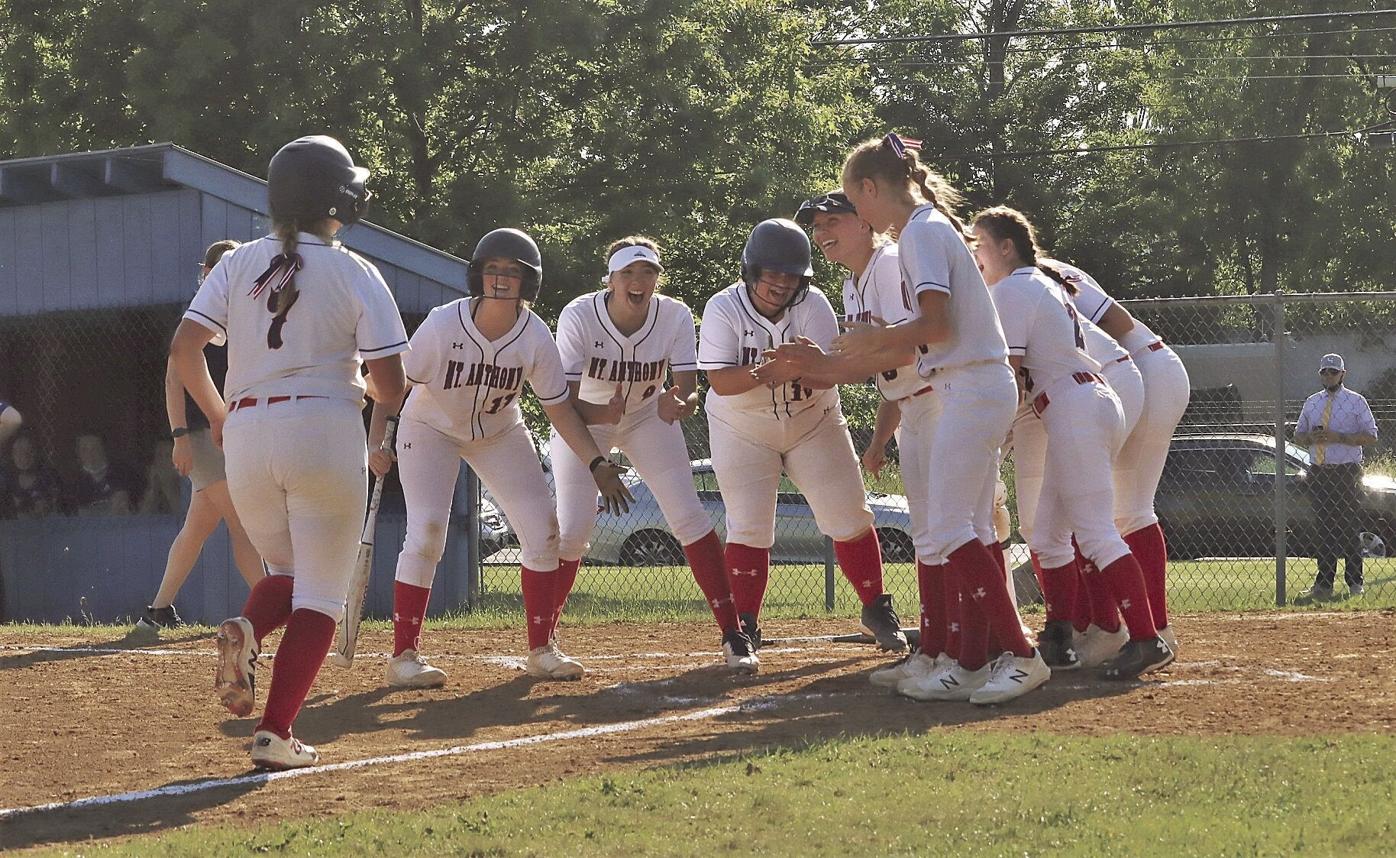 Grace Kobelia, left, completes her home run trot as the rest of her teammates celebrate her sixth inning blast on Friday.

Colchester pitcher Chloe Palmer runs back Mount Anthony's Autumn Hayes during a play in the sixth inning of Friday's 5-2 win.

Mia Paligo hits a double to lead off the third inning during Friday’s 5-2 win over Colchester.

Sofia Berryhill throws a pitch in the third inning of Friday's 5-2 win over Colchester. Berryhill struck out a school-record 17 Lakers in the victory.

Grace Kobelia, left, completes her home run trot as the rest of her teammates celebrate her sixth inning blast on Friday.

BENNINGTON — For the top-seeded Mount Anthony softball team, coaches Katie Contrada and Brooke Remington are confident that any of their players can step up in a big moment and make a play that changes a game.

On Friday in their Division I quarterfinal matchup, two specific Patriots filled that role.

“Every team is going to try to play their best game against you,” Contrada said. “When we have Sofia out there working hard on the mound and when the hitters can go out there and get it done, things are usually going pretty well.”

First it was Berryhill’s turn to get the crowd buzzing. Using a low 60mph fastball and great placement, she mowed down the Colchester hitters. She never had less than two strikeouts in any one inning and she struck out three in the first, second and fifth innings.

“I don’t really think about how many strikeouts I have until the very end or if someone tells me,” Berryhill said. “I just go one batter at a time. I don’t really aim to do that, it just ends up happening.”

She allowed three hits — two solo homers — but never got down or had any bad body language at all, stoically turning around, facing the next hitter and getting them out.

“I have a great group of girls behind me and I trust them 100 percent, which makes me feel more confident in the circle,” Berryhill said. “I take a deep breath, throw my pitches and hit my spots.”

Then in the middle of the game, it was Kobelia’s turn to be the hero. Up 2-0 in the fourth inning, Kobelia came up with Masson Billert on first. With a 1-1 count, Kobelia blasted a shot to deep left-center field for a two-run homer and a 4-0 lead for the Patriots.

Coming around the bases with a huge smile, Kobelia touched home plate surrounded by her cheering teammates.

“Honestly, the only thing going through my mind during [the two at-bats] was just ‘see ball, hit ball’ and then my parents said don’t overthink anything,” Kobelia said. “It just felt good, I went up to the plate with the Rocky theme in my head.”

So with the score at 4-2, Kobelia gave the Patriots a massive insurance run with another shot to left-center and a 5-2 lead. The home runs were Kobelia’s second and third of the season, she hit her first against Fair Haven.

“Grace has been working hard on her hitting all season and her pitch selection and it all came together today,” Remington said. “She’s a really upbeat kid, she never gets down on herself and when she’s in the batter’s box, she’s relaxed and gets it done. Today was Grace’s day.”

With a three-run cushion, Berryhill finished off the Lakers, ending the game with two strikeouts and a deep fly to center that Allee George grabbed about a step from the fence.

“It’s pretty cool to watch Sofia pitch,” Kobelia said. “I see it from right field and I wish I had a little more action, but I’m not complaining about anything. She’s done a phenomenal job.”

There were other contributions through the lineup for the Patriots. Madisyn Crossman went 3-for-4 with three singles and an RBI. Mia Paligo added two hits, including a double to lead off the third inning. Berryhill went 2-for-4 out of the leadoff spot with a RBI. In all, the Patriots ripped off 13 hits against Colchester starter Chloe Palmer.

“Maddie came up ready to hit and did her job,” Contrada said. “I thought we hit the ball well today but Colchester also played great defense. I was proud of our offense today.”

MAU improves to 13-0 with the victory, while Colchester’s season ends at 7-9. Mount Anthony will host No. 4 Essex on Tuesday at 4:30 at the high school softball field for a chance to play for the championship at Castleton University next weekend.