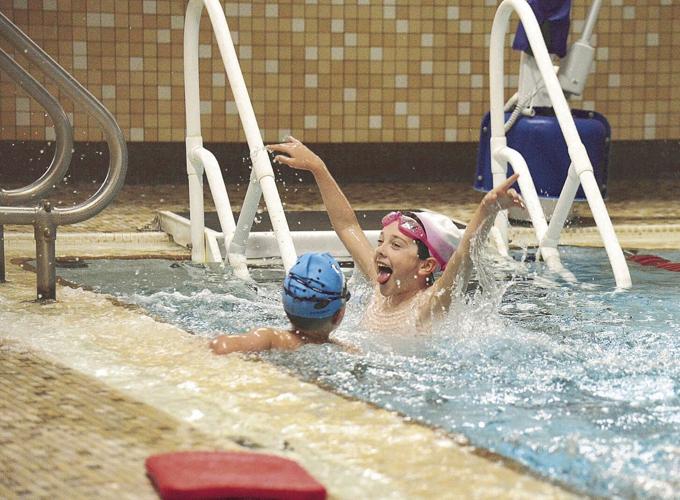 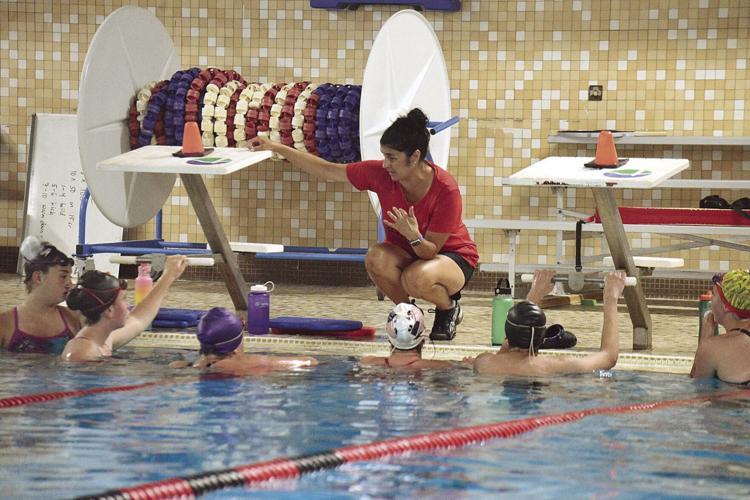 Marauders coach Nicole Goswami speaks with her swimmers during a 2021 practice.

Marauders coach Nicole Goswami speaks with her swimmers during a 2021 practice.

BENNINGTON- The school year might be over, but the Bennington youth sport scene continues. The Marauders swim team that calls the Bennington Rec Center home will begin their summer schedule this Tuesday, hosting Springfield.

The Marauders look forward to a summer of swimming that is closer to normal after two years of being hampered by COVID-19, of course having no events in the Summer of 2020 and being heavily restricted (including no spectators) last year. Head coach Nicole Goswami is happy to have the old atmosphere back.

“(It wasn’t) the same excitement and environment,” she said. “It’s fun to have the parents up in the stands cheering, but we’d look up and we were the only ones there.”

Goswami, who is now in her 22nd year coaching the Marauders (13 as head coach), said that numbers within the program have bounced back to pre-COVID levels, as well. There are 30 to 35 swimmers currently in the program. While spring sports and the school year wrap up, the Marauders are still in the pool three times a week, but will ramp back up to five practices at the start of July.

The Marauders program, which has been active in town since 1986, welcomes swimmers of all abilities ages 2 to 19 (though the oldest right now is 16). The team is split into four levels based on experience and coach discretion, with consideration given to age of the swimmers, as well.

During the summer, the pool is mostly Bennington-area kids, but Goswami runs the show year-round with the help of her assistant coach (and high school rival) Jennifer Parizo. In the fall and winter, the Marauders draw swimmers from Manchester, as well as over the border in New York and Massachusetts.

“It’s a small community team where we all know each other. We all support each other,” she said. “It’s great to have the resources to be able to do this in a small town.”

Of course, one of those resources is time, especially with so many swimmers. Some of the most advanced of Goswami’s swimmers also compete for Mount Anthony Union High, which leads to some collaboration and cooperation with MAU coach Jody Driscoll that Goswami is grateful for.

Shay Callanan is one of the standouts on the team that they just can’t seem to keep out of the pool. She often pulls double practices between MAU and the Marauders during the high school season. She appeared eager to accept a leadership role, passing on Goswami’s instructions to her other level-four swimmers at Thursday’s practice, Josha Roopnarine and Zoey Zazzaro.

That seems to be a common theme at Marauders practice, which is a testament to the family atmosphere cultivated by Goswami and her team at the Bennington Rec Center pool. Over a dozen parents were present, enduring the steamy room to watch their kids practice.

Some of the parents were there for the Marauders’ “Guppies” division, which is essentially a pre-school-aged program for young swimmers to quite literally get their feet wet. The value of continuity and consistency is clearly not lost on Goswami and her staff.

“It’s a learn to swim program. They’re just getting wet and getting comfortable in the water,” Goswami said, pointing to the toddlers wearing swim belts led by another coach, Nicole Biela. “It’s actually a great feeder program. Once they get out of the floating stage and they can make it to level one, it’s just a natural progression.”

Swimming as a lifelong endeavor is definitely something both familiar and valued by Goswami. Her mother, Elizabeth, was an indispensable part of the program for years. The high-tech scoreboard that the Marauders fund-raised for themselves has a plaque next to it that bears the names of both mother and daughter, and reads “The Elizabeth ‘Betty’ Goswami Scoreboard in Honor of Nicole Goswami.”

For the younger Goswami, carrying on the legacy of both the family and the program is important. For her, though, coaching is about much more than wins and losses or times on their new scoreboard.

“What I really want for them is to be good human beings,” she said. “Polite and highly respectful.”

While Goswami has an obvious passion for the sport, she also sees it as a means to help children be better prepared for challenges in their future.

“When I remember my coaches… it was more about believing in yourself and bringing out who (we) really were,” she continued. “I hope 20 years from now, they’re like ‘Wow, I’m more competent because I swam. I can do hard things’…I just want to know I’ve made an impact– a positive one.”