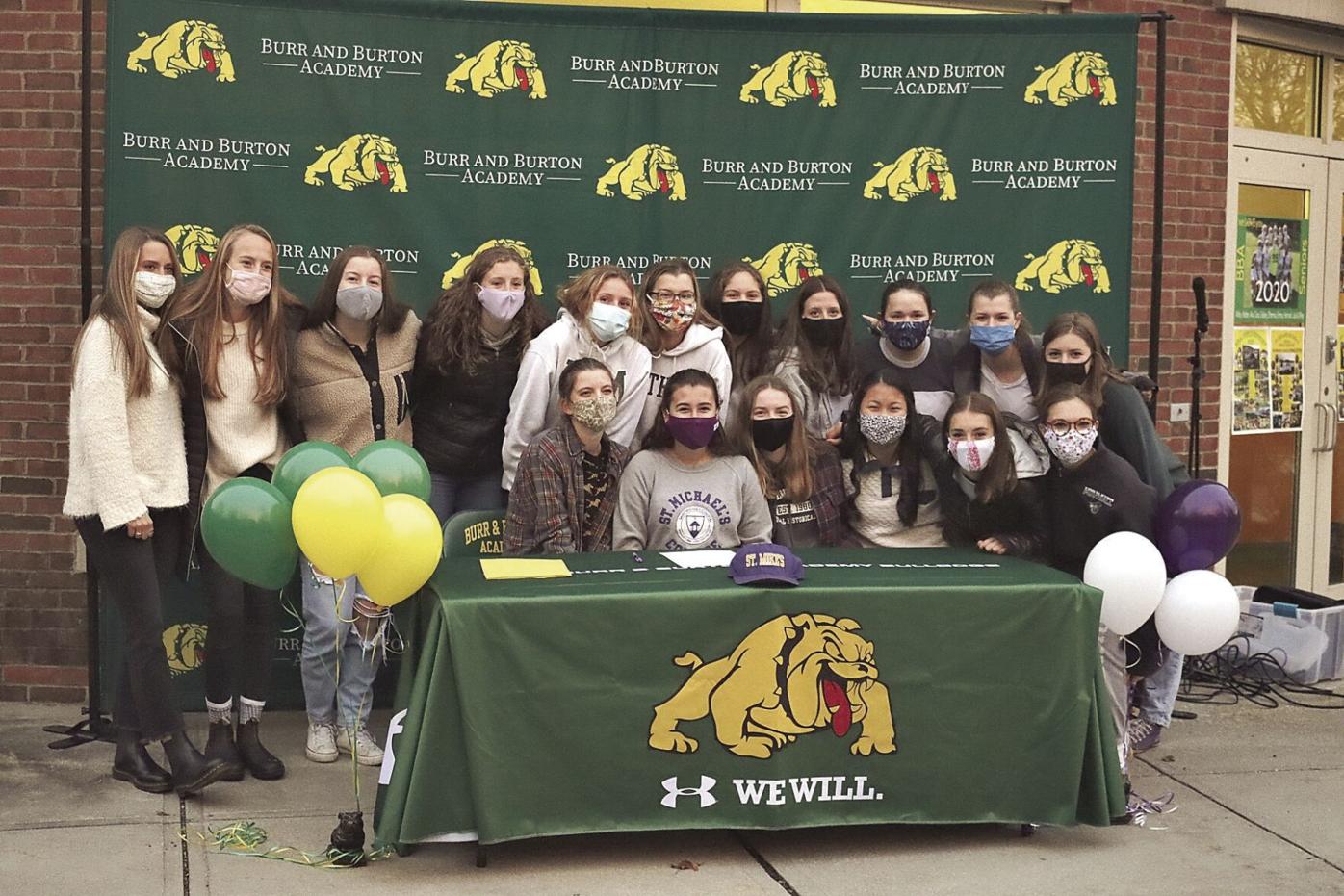 Burr and Burton’s Abby Farrington poses for photos with her teammates after signing her national letter of intent to play field hockey at St. Michael’s College next fall. 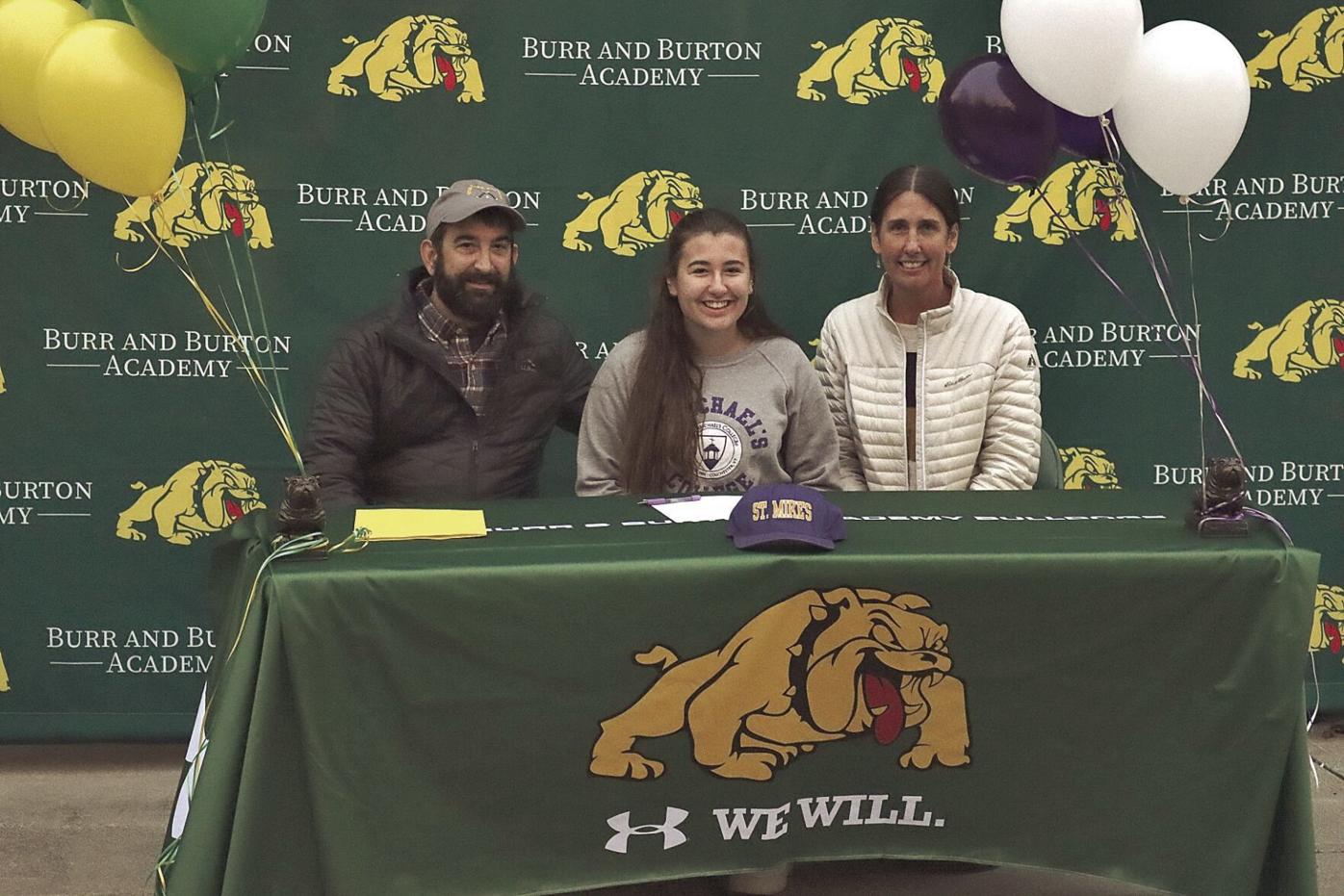 Burr and Burton's Abby Farrington takes a photo with her mom and dad after signing her national letter of intent to play field hockey at St. Michael's College next fall. 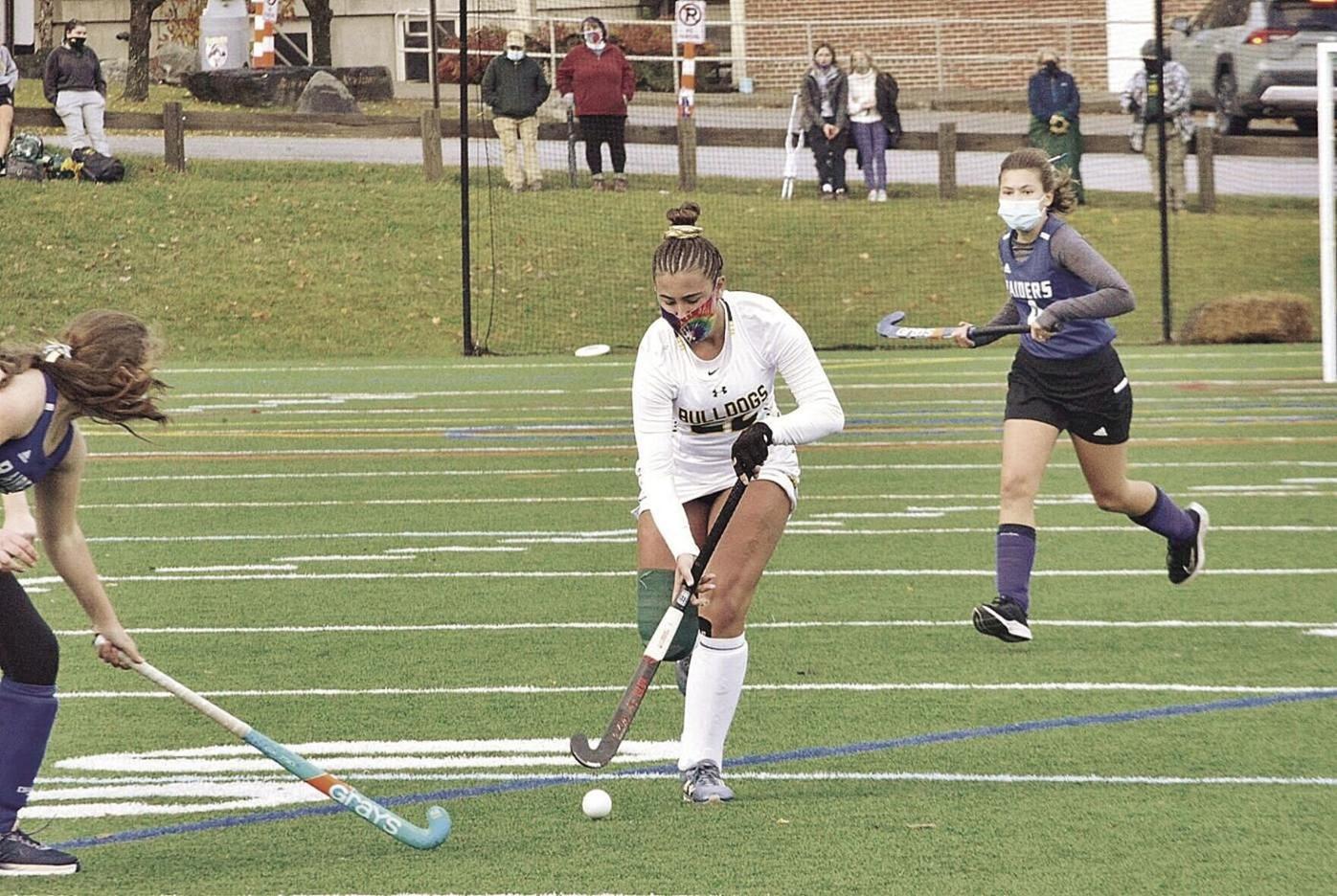 Abby Farrington controls the ball during a game earlier this season.

Burr and Burton’s Abby Farrington poses for photos with her teammates after signing her national letter of intent to play field hockey at St. Michael’s College next fall.

Burr and Burton's Abby Farrington takes a photo with her mom and dad after signing her national letter of intent to play field hockey at St. Michael's College next fall.

Abby Farrington controls the ball during a game earlier this season.

The former Mount Anthony field hockey player was devastated to find out that the Patriot program would go on hiatus for low numbers.

Fast forward two years, and a switch from Bennington to Manchester, and Farrington is living out her dream to play field hockey in college, signing her National Letter of Intent to compete at St. Michael College next fall.

“It was a long journey, last year was hard with the transition,” Farrington said after signing her letter. “I made a lot of friends here and they made it a lot easier.”

After MAU’s program was dropped, Farrington knew she had to do something. So she contacted Dave Miceli, the Burr and Burton athletic director, to see if something could be done.

Luckily there was: the Vermont Principals Association allows member-to-member agreements, where athletes at schools without a certain sport can play at a different school, as long as there is room on the team.

So while being a student at MAU as a junior, Farrington played field hockey at BBA, helping the team to a Division II semifinal appearance.

“Going into her junior season, to have the season canceled was [upsetting],” said Becky Farrington, Abby’s mom. “She got on the phone and starting calling people. It was very fortunate she was accepted here and everything fell into place.”

As a senior, Farrington decided to enroll at Burr and Burton, and that transition has been smooth as well. This season, Farrington was a captain and helped lead the Bulldogs to the Division II championship.

“I’ve improved a lot as a player here and that’s a testament to [coach] Barb [Miceli] and the coaching staff. That helped me with the college recruiting. I’m just happy I could keep playing for all four years,” Abby Farrington said.

There’s a family legacy too regarding St. Michael’s College. Becky had a scholarship to play basketball at St. Mike’s, graduating in 1996. Becky said that Abby went to a field hockey camp at the school last year and was enamored.

“St. Mike’s was on the top of my list,” Abby Farrington said. “I liked playing there. Going into this year, I wanted to stay in Vermont, be a little closer to my family.”

The coronavirus pandemic also made things difficult, including with recruiting.

“It did have an effect on recruiting, I couldn’t visit schools and the coaches couldn’t contact us,” Abby Farrington said.

But her mom said that it was just another hurdle to leap over.

“She’s worked hard,” Becky Farrington said. “She knew that college was one of her goals and that she wanted to play at that level. At one point, we didn’t know if there would be any more field hockey, but now to get to this is exciting. She’s not one to give up easily.”