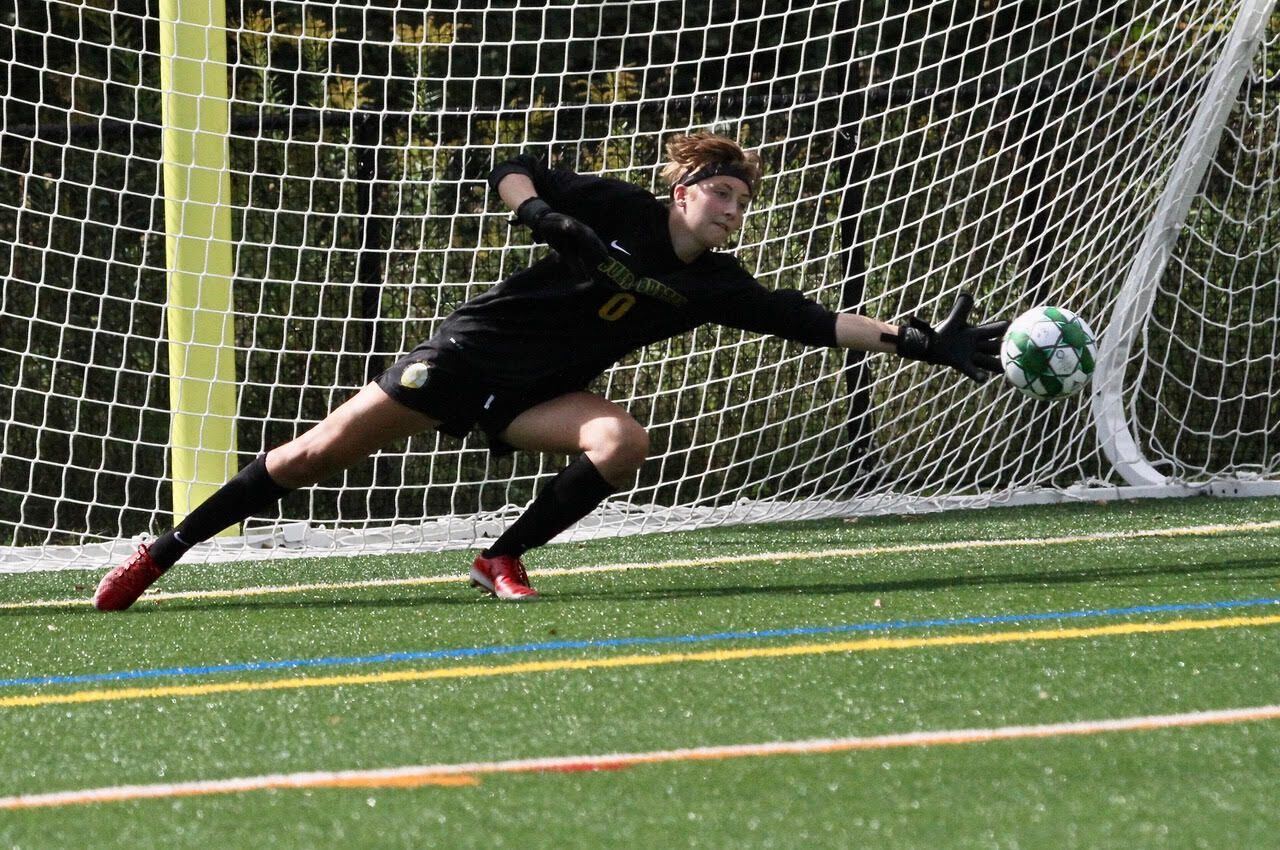 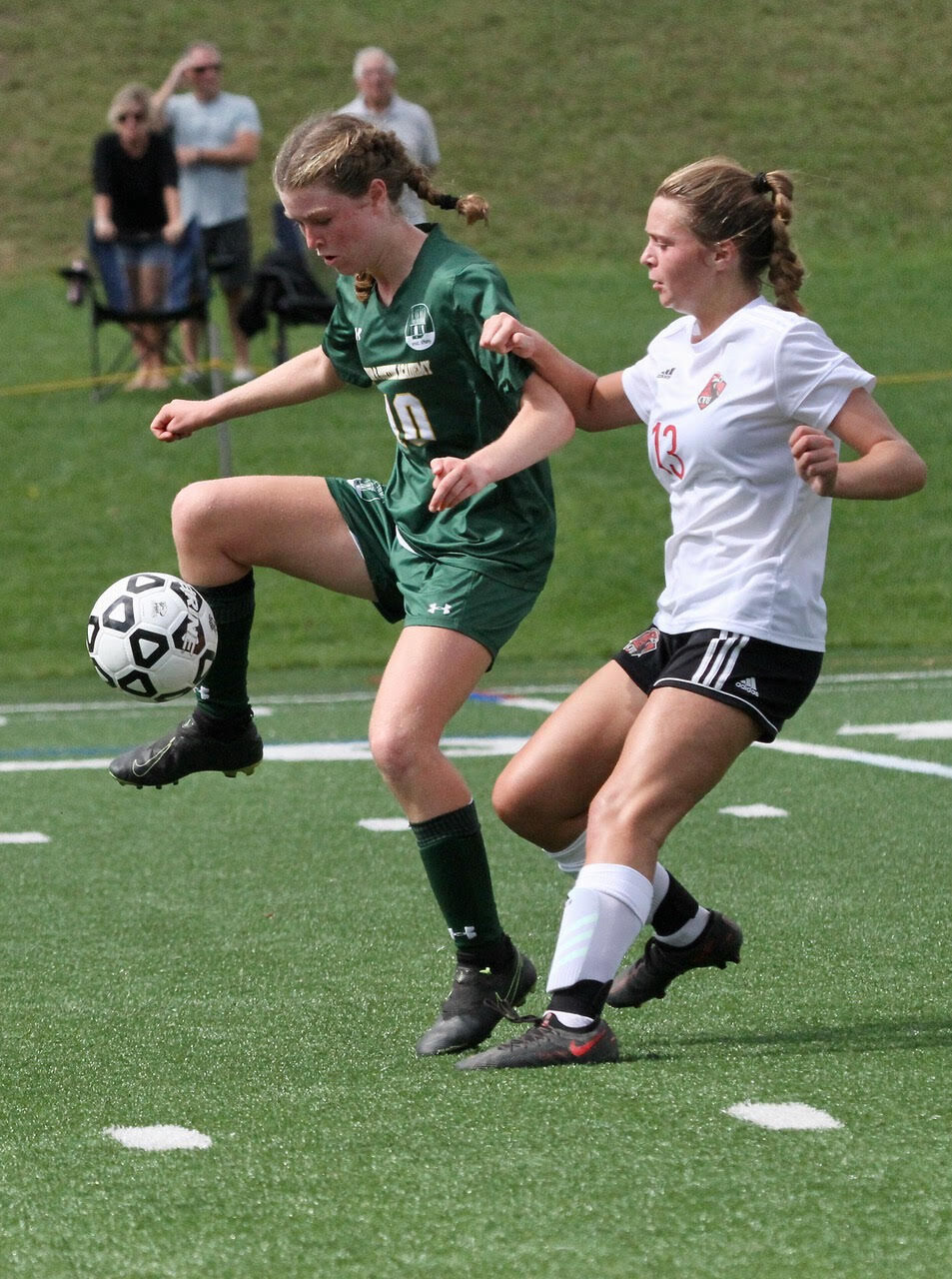 MANCHESTER — For the first 70 minutes of Saturday’s clash between perennial girls soccer powers Burr and Burton and Champlain Valley, the two teams were separated by a single tally that came with less than a minute left in the first half.

But in those final 10 minutes, CVU’s depth and athleticism won out, as the Redhawks scored three times en route to a 4-0 victory at Taylor Field on a warm mid-September day.

“It was a really good stretch for both teams [in the first half],” said CVU coach Stan Williams. “We tried to go with waves of players, and hopefully we’d have some legs. We started to win the midfield, and our speed up top won out in the end.”

The teams played nearly even throughout the first half, with both teams earning chances at their respective goals. Burr and Burton’s best first half chance came with six minutes left, when Brooke Weber put a shot on goal that CVU’s Emma Allaire pounced on.

“We didn’t just hang with them, I felt we outplayed them in many moments,” said BBA coach Suzanne Mears. “We just couldn’t find the back of the net and create those opportunities. I’m proud of how we kept up.”

But with a minute remaining before halftime, BBA couldn’t clear a chance which resulted in a scramble in front. In the scrum, CVU senior Emma Crum got a shot off and sent it past Bulldog goalie Abigail Kopack for a 1-0 lead.

“That’s a tough one,” Mears said. “We had to go in 0-0, and it’s proof you can’t let down for a second. We continued to press in the second half and play well together.”

CVU came out quickly in the second half, with Williams subbing liberally with two or three players at one time to keep his players’ legs fresh. Four minutes in, the Redhawks nearly doubled the lead, but Kopack was there to snuff out the opportunity.

“Only a sophomore, she’s stepped in and been phenomenal,” Mears said. “She owns the box and she communicates well with her defense.”

Kopeck had 10 saves for the Bulldogs, giving CVU few chances early in the game. A few minutes later, Kopeck made another diving save to keep the game at 1-0.

“She was impressive with her reading of the game,” Williams said. “She came out of the box a couple times to intercept things that others may not have. She held on to the ball also, not giving us any second chances.”

As time ticked away in the second half, Weber had another excellent chance with 10 minutes to go, but Allaire was up to the task, coming off her line to make the play on the BBA junior’s attempt.

On the next possession, CVU finally doubled the lead. Sophomore Chloe Pecor had a tremendous through ball from midfield, split two BBA defenders and scored for a 2-0 advantage.

That goal seemed to calm CVU, give them a chance to take a breath, and a more comfortable Redhawk squad scored twice more in the final minutes.

“We are super young, we have 11 ninth and 10th graders, and only three seniors,” Williams said. “The kids are learning on the fly and to be able to battle through the first part and then pull away at the end, that’s a great learning experience.”

With 2:22 to go, BBA misplayed a 50-50 ball, and Crum took advantage for her second goal and with 66 seconds left, Crum scored again for a hat trick.

Mears said that she was proud of her team for the way they fought and knows it will pay dividends going forward.

“There’s no room to hang our heads,” Mears said. “I’m really proud of the way they played today. We have a couple of things to tighten up, but it’s still early in the season and I have no doubt we will.”

Burr and Burton drops to 3-2 on the year and travel to Rutland on Tuesday for a 6 p.m. contest.