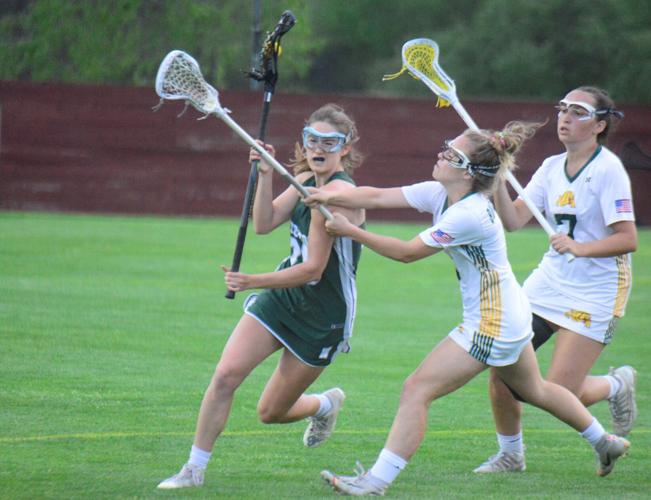 Burr and Burton's Grace McDonald defends the ball during Friday's game at Applejack. 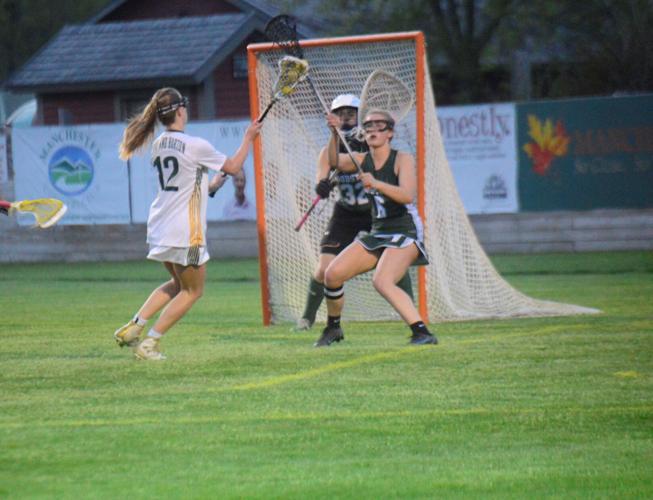 Burr and Burton's Grace McDonald defends the ball during Friday's game at Applejack.

MANCHESTER — Senior night at scenic Applejack Field was a success for Burr and Burton girls lacrosse. They controlled play for most of the game against a solid Woodstock squad, winning 14-5 on Friday night and hitting double-digit wins for the season in the process.

Paige Samuelson led the charge for the Bulldogs with four goals. Sadie Stefanak and Grace McDonald were a force in the offensive end, as well, adding three goals and one assist apiece.

It was a senior who got the scoring started for BBA, though, as Tatum Sands showed shades of Wayne Gretzky from behind the net. Woodstock defenders took away all of her passing options, but that left too much space for Sands, who tucked the ball inside the right post for the game’s first score in the third minute.

That goal seemed to put the Wasps’ defense on notice, causing them to buzz around Sands a bit more when she had the ball, creating more lanes for her teammates.

“That was a double crease roll… she saw an opening and just was able to put it in the goal,” head coach Ken Stefanak said after the game. “(Woodstock’s Audrey Emery) is a good goalie. She’s very good on the crease rolls. She holds her position and is tough to score on.”

It wasn’t all smooth sailing for the Bulldogs early, though. Perhaps the added excitement of honoring their five seniors and playing under the lights at Applejack had them a little too amped up to start the game. The offense looked out of sync early and the ball was on the ground frequently, allowing Woodstock to strike quickly with two goals and actually take a 2-1 lead just under five minutes into the game.

It didn’t take long for the BBA girls to wake up and show that no moment was going to be too big for them, though. The senior leadership shined through and helped turn the tide of the game.

It was Sands who assisted a Grace McDonald score after Woodstock’s second goal. The Wasps’ only lead of the game had lasted just nine seconds.

Then, just 24 seconds later, it was another senior, Annabelle Gray, who did it all herself to take back the lead. Gray gained control shortly after the faceoff and then, from well behind midfield, weaved and slashed her way through the Woodstock defense to another goal.

Stefanak had nothing but good things to say about their opponent, who they had just played last Friday, as well (a 15-8 BBA win).

“Yeah, they’re a good team. They’re hard to deal with. They fight hard. They don’t give up.”

Woodstock showed a lot of that fight after the Gray goal. They seemed poised to buckle down and stop the bleeding, getting a bit physical and gaining possession. They set up their offense and held onto the ball for well over two minutes in the BBA zone, looking for their opening.

Then, it was yet another senior coming up big for the Bulldogs. Hannah Cyr intercepted a pass, drawing perhaps the loudest cheers from the BBA sideline the whole game. The change in possession also felt like the end of any Woodstock momentum.

“They’re a patient team. They cut hard to the middle and deliver the ball really well in the middle. For sure, that was a big turnover.”

It was all BBA from there. They closeD the half with six goals, including two by Samuelson.

Perhaps the play of the game came during that stretch, as Sands made an incredibly athletic break on a pass and soared through the air to intercept the ball deep in Woodstock’s end. Sands cut through the defense for an open shot, which sailed just high of the crossbar, but her teammates retrieved it. The extra possession that Sands created resulted in McDonald’s second goal of the night.

BBA went into the half up 8-4. With a fairly comfortable lead, the Bulldogs slowed their offensive pace. Brooke Weber (two goals, one assist) seemed to be around the ball or in possession of it almost the entire second half.

Several times, she waited patiently near midfield, drawing the Woodstock defenders away from their net to force the action. Weber would then blow past her opponent to create scoring opportunities.

“She’s got good speed,” Stefanak said of his junior midfielder. “We like to let her go when she feels like she can find a lane or a seam.”

Weber was forcing a lot of the action in the offensive end, and strong play from senior defenders Alexa Witkin and Francesca Levitas held the Wasps to just one goal in the second half.

It was business as usual from Sands, who helped kill off a big penalty in the second half.

“She played great d today,” Stefanak said of Sands. “We were down two (players) at one point. We were five versus seven and she made a great interception in the eight and we were able to push it into our offensive zone and kill a couple minutes of penalties.”

The BBA girls (10-2) head into their final week of the regular season in contention for the top seed in Division I. They have three games left to play, including a showdown with 10-2 CVU that will have playoff implications.