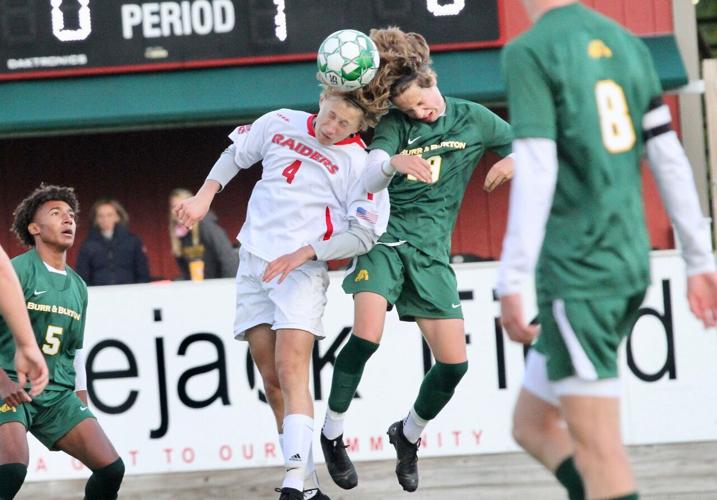 Burr and Burton's Bodie Smith (right) gets his head on the soccer ball during Friday's 2-1 loss against Rutland. 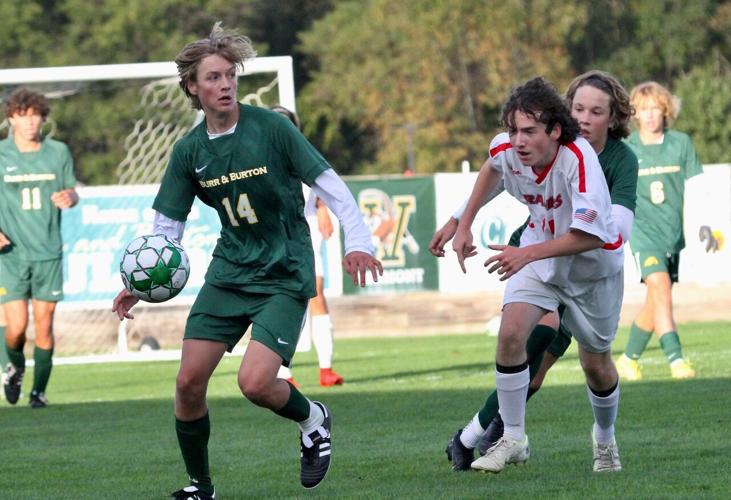 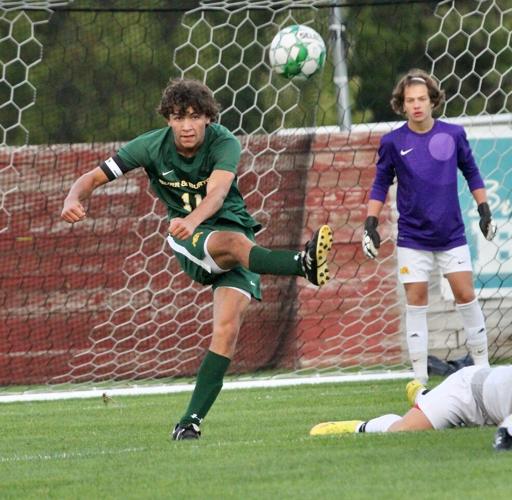 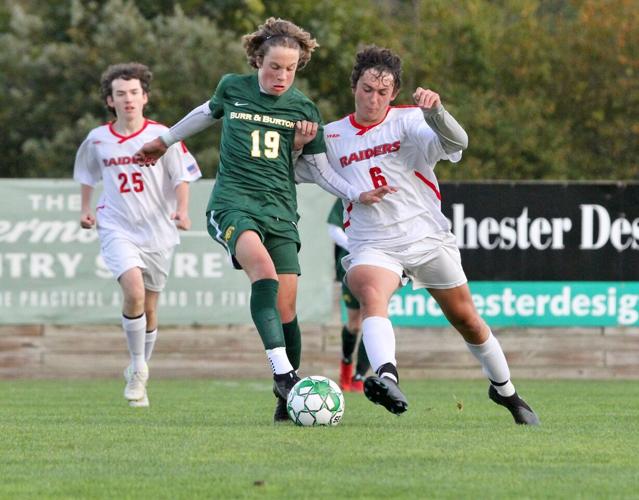 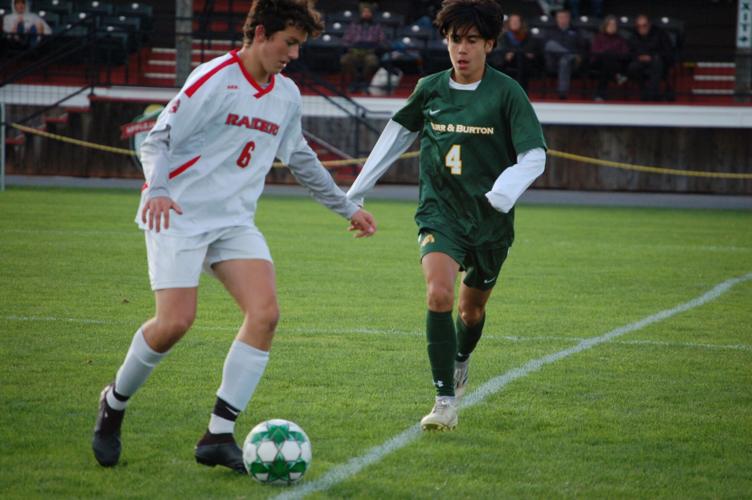 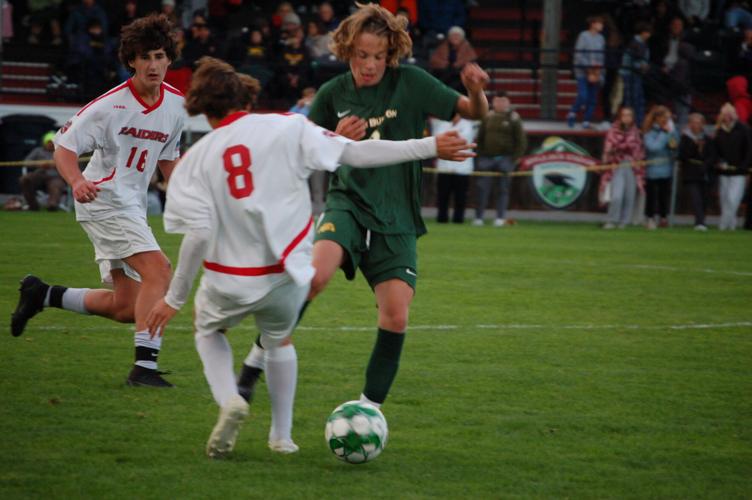 BBA freshman forward Bodie Smith battles with Rutland's Eli Rosi for the ball during their game at Applejack Field Friday, 9/23/2022

Burr and Burton's Bodie Smith (right) gets his head on the soccer ball during Friday's 2-1 loss against Rutland.

BBA freshman forward Bodie Smith battles with Rutland's Eli Rosi for the ball during their game at Applejack Field Friday, 9/23/2022

MANCHESTER — Burr and Burton boys soccer dropped a tough game to Rutland at Applejack Field on Friday night, with two penalty kicks in regulation making all the difference in the 2-1 loss.

Rutland senior Eli Rosi was the shooter on both penalty kick attempts. The first evened up the game at a goal apiece with just under ten minutes remaining in a half that had mostly been controlled by the Bulldogs to that point.

A foul was called on a Bulldogs defender, and initially everyone set up as if it would be a free kick from just outside the goal box. After some deliberation, the officials determined that the foul occurred inside the box, and awarded the penalty kick that was the equalizer. Goalkeeper Reed Brown got his hands on the shot bound for the right side of the net, but not enough to keep it from going in.

“Our keeper was right on it,” said coach Patrick Zilkha. “But that was just a strong shot.”

The goal breathed some life into Rutland. The field seemed to be tilted towards BBA’s net for the rest of the first half and carried over into the second, until another mistake in the goal box gave RHS their chance to take the lead.

A beautifully placed corner kick had Rutland knocking at the door, but a BBA defender stepped in front of it just in time. Although it was inadvertent and didn’t appear to be what stopped the shot from going in, a handball was called. Rosi cashed in and put Rutland ahead for good on the ensuing penalty kick in the 49th minute.

It had been all BBA for about the first 25 minutes of the game. In the 12th minute, junior captain Max Brownlee had a chance from point blank range off a corner kick that was somehow turned away.

Just a few minutes later, Barit Perry boomed a free kick from just behind midfield to right in front of the RHS net. Taylor Harrington almost redirected it home with a header, but as was the case for much of the night, Rutland’s freshman keeper Colin Rider was in perfect position to shut it down.

The Bulldogs finally drew first blood in the 23rd minute on a nice feed from Bodie Smith to Andrew Claire. Claire buried the chance, sending it past the diving Rider into the bottom left corner.

The Bulldogs let it slip away from there, though.

“This is a young group and we’re still going through some growing pains,” said Zilkha. “We’re an intelligent team, we’re just still trying to put it all together.”

The Bulldogs turned up the heat for the last 25 minutes, but were unable to breakthrough, forcing Rider to make a half dozen saves down the stretch. Some hustle and fantastic footwork from junior midfielder Carson Gordon set up Austin Cox on two excellent crosses in the 55th and 57th minutes, respectively.

Cox launched a rocket, but right at Rider, with the first. Then Cox beat the Rutland keeper, but the ball rolled just across the goal mouth and wide left, drawing an agonized groan from everyone in attendance at Applejack.

“We had some chances in the end there,” said Zilkha. “We just can’t put ourselves in a position where we need to score with 10 minutes left.”

BBA falls to 2-4 on the season. They’ll get a chance to get back on track this Wednesday, 4 p.m., at Leland and Gray. Rutland notches their first win, improving to 1-3. They’ll be at Woodstock on Wednesday. The two teams will see each other once more this regular season, as BBA will travel to Rutland Oct. 11th for the rematch.