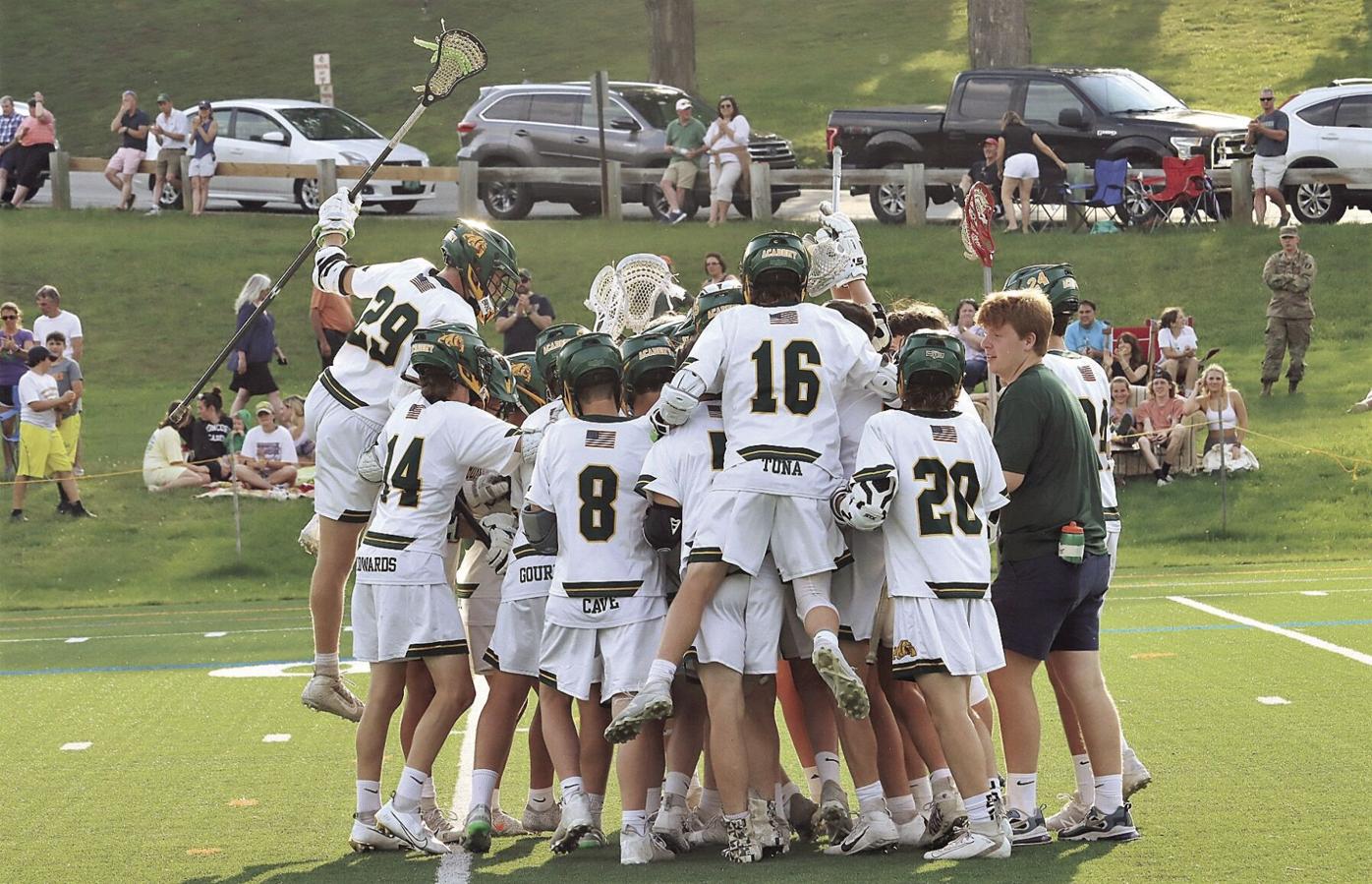 The Burr and Burton boys lacrosse team celebrates after winning the Division I quarterfinal against South Burlington. 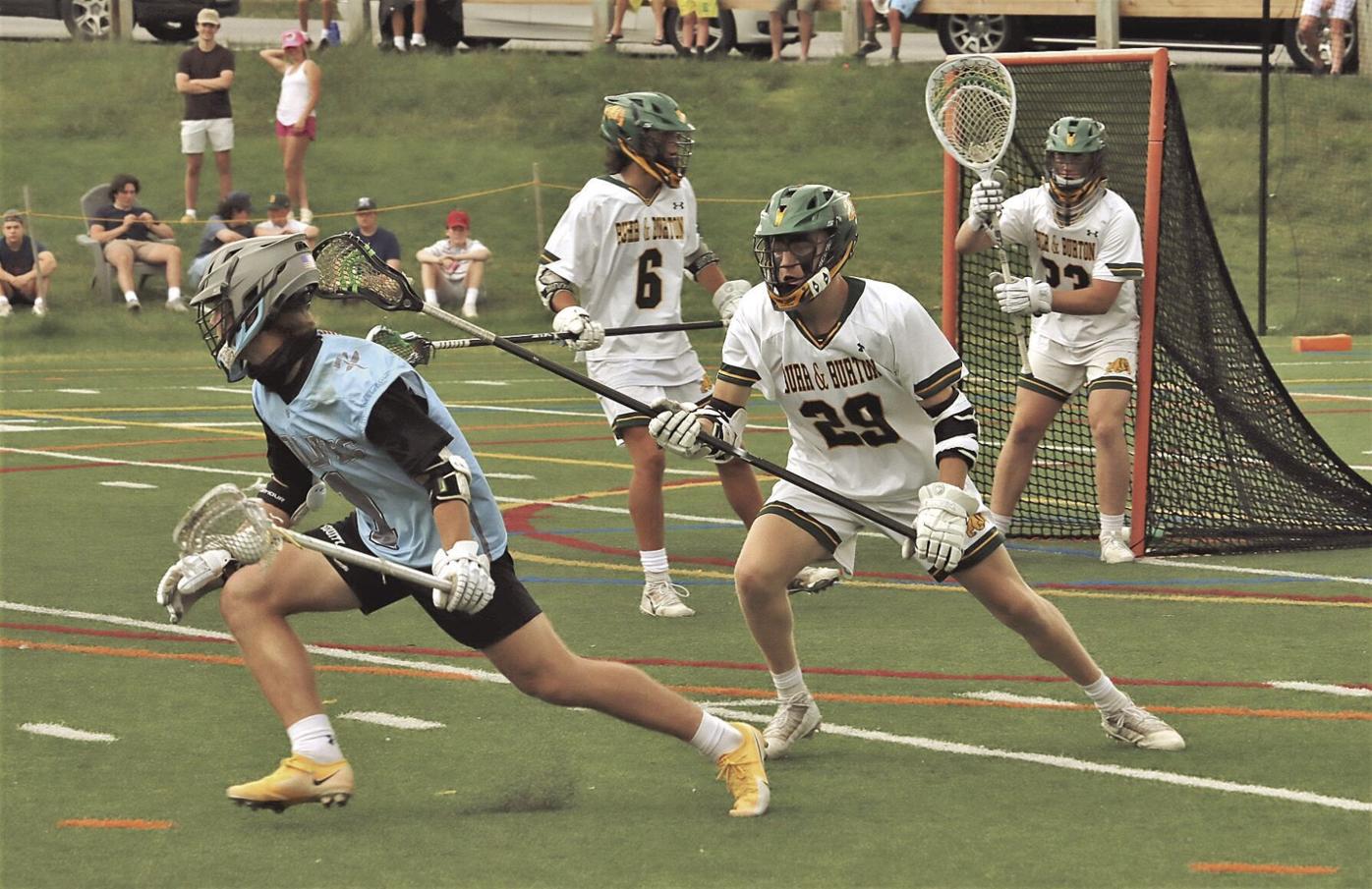 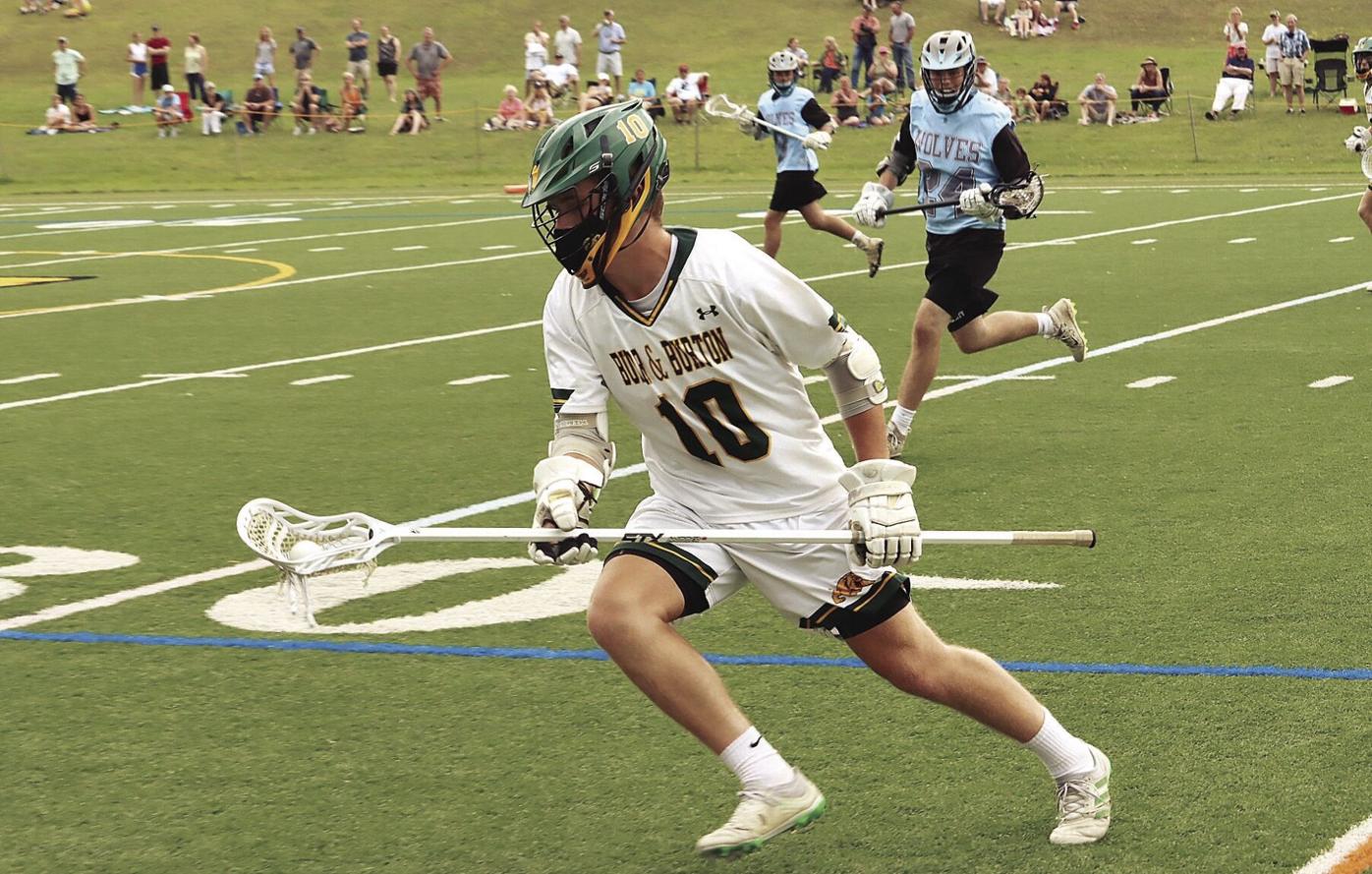 Judd Gourley picks up a ground ball during Saturday's Division I quarterfinal. 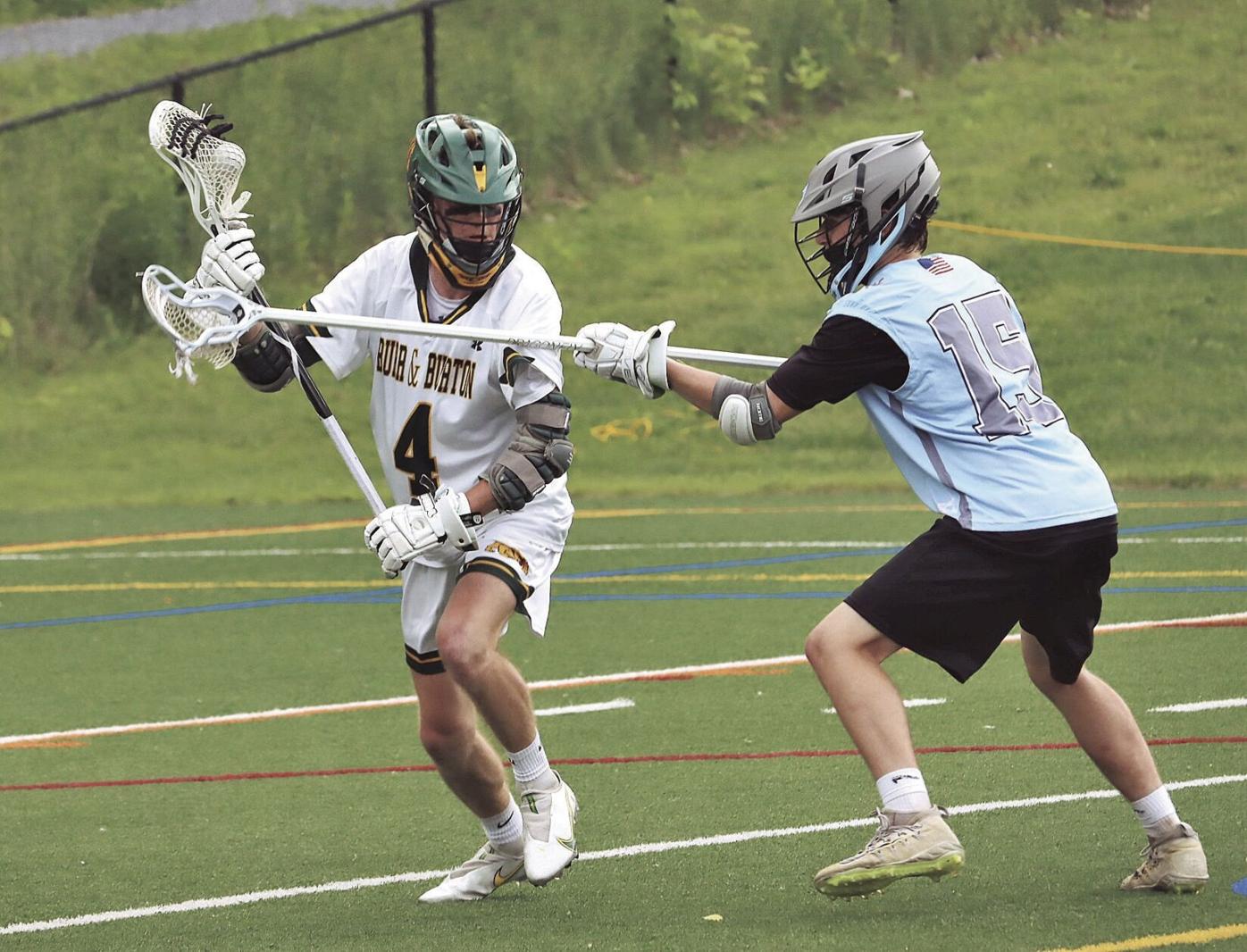 Matt Grabher gets through the South Burlington defense during Saturday’s 12-4 win. 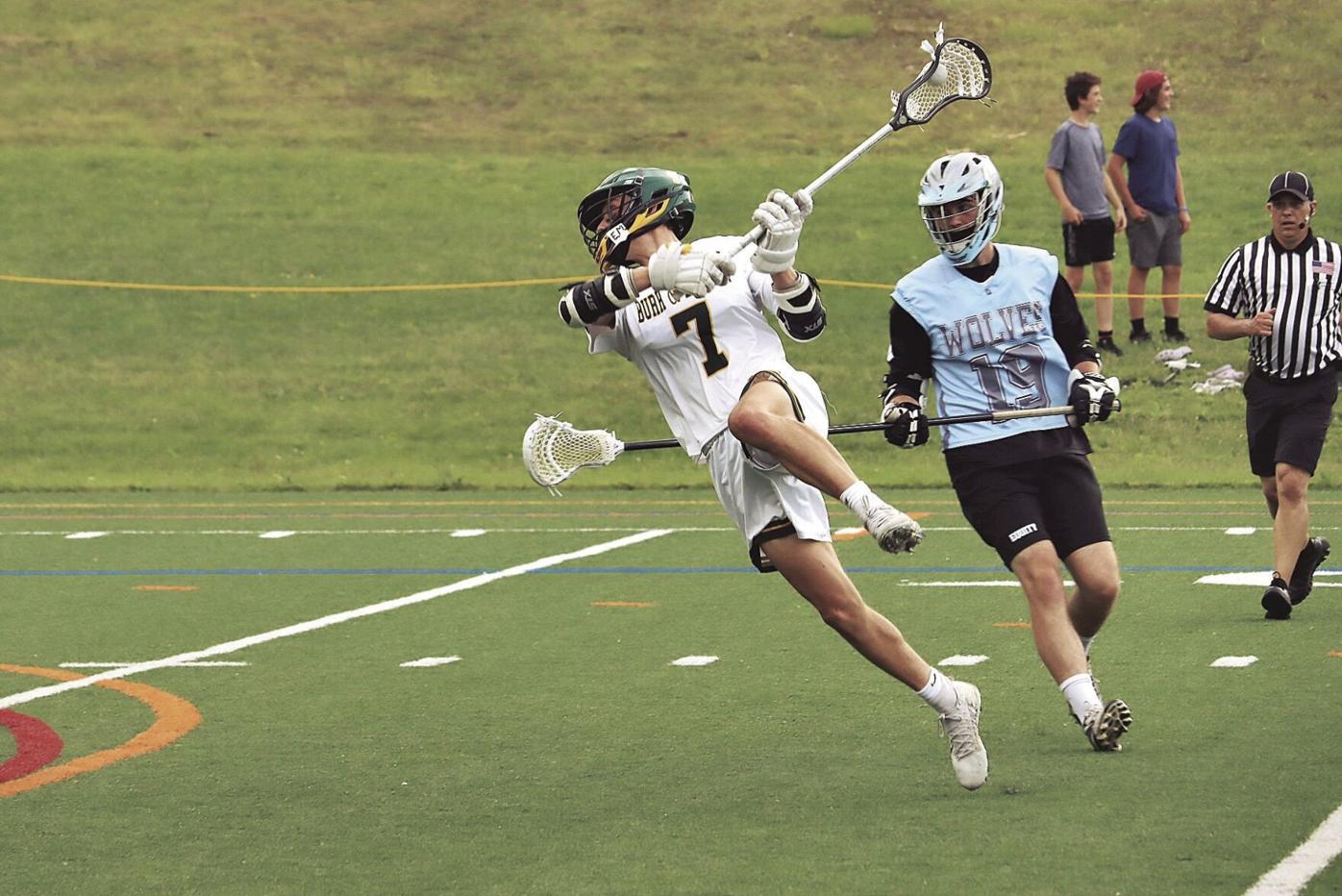 Nicky Miceli fires a shot toward the South Burlington goal during Saturday’s 12-4 win over the Wolves in the Division I quarterfinal.

The Burr and Burton boys lacrosse team celebrates after winning the Division I quarterfinal against South Burlington.

Judd Gourley picks up a ground ball during Saturday's Division I quarterfinal.

Matt Grabher gets through the South Burlington defense during Saturday’s 12-4 win.

Nicky Miceli fires a shot toward the South Burlington goal during Saturday’s 12-4 win over the Wolves in the Division I quarterfinal.

MANCHESTER — The revenge tour is one step closer to its conclusion.

Led by a tremendous defensive effort and five goals by Nicky Miceli, the No. 3 Burr and Burton boys lacrosse team held No. 6 South Burlington scoreless for 16 minutes of game time in a 12-4 victory on Saturday at Taylor Field, avenging a loss from earlier in the year.

“I think that game was early in the season and we were still trying to figure it out,” said coach Tom Grabher. “I think we changed some things around and we saw the results of that.”

Jack Morrison was a beast in net, racking up 10 saves, including four in the first quarter as the Wolves were held scoreless. Morrison and Miles Kaplan combined for 11 saves for the Bulldogs.

It was a slow start for the both teams, each feeling out the other. Miceli opened up the scoring about five minutes in, zipping a left-handed shot past the South Burlington goalie. Three minutes later, Emmett Edwards doubled the lead, assisted by Matt Grabher to make it 2-0. A minute after that, a BBA shot hit the post, and it seemed like all of the momentum was going the Bulldogs’ way.

But into the second quarter, the Wolves’ Will Hershberg got them on the board off a restart and then less than two minutes later, Hershberg tied the game.

The Bulldog defense regrouped and for the next 16 minutes of game time, the Wolves were held off the board. Grabher specifically mentioned senior Duncan Chamberlain as a leader of that group.

“Duncan had an outstanding game,” Grabher said. “But with the position he plays, it isn’t always noticed. His value can’t be stated, when he plays the way he can play, he’s a tremendous asset for us.”

In quick succession, BBA scored three times — with Grabher putting in two in a row and Edwards getting the third — off a Grabher assist, to take a 5-2 lead at halftime.

“Teams just can’t focus on one or two guys,” Grabher said. “We have five, six, seven guys that can do it and it’s a matter of who’s going to reap the rewards that day. We have a lot of options offensively.

At the break, many were reminding their teammates that they had had a similar lead in the teams’ matchup at the beginning of May — a game that ended up 10-9 in favor of the Wolves.

Miceli started the second half with his second goal of the day, making a sweet play where he bobbled a pass, but stuck with it and flicked it in for a 6-2 lead. Rex Jewell finally stopped the goal-less streak with 5:11 left in the third, but Miceli went one-on-one at the end of the third quarter to extend the lead back to four after three quarters.

“Earlier in the year, I hadn’t been doing that and coach Grabher all year has been telling me to dodge, dodge, dodge and not necessarily to score, but to make a play,” Miceli said. “I finally started to do it.”

Karter Noyes got into the scoring a minute into the fourth quarter, and two minutes later, Jewell scored his second goal, but four was as close as the Wolves would get as BBA finished the game with four straight scores — Grabher, two by Miceli (his fourth and fifth of the day) and then a final nail with 1:22 left as Teddy Mirenda tallied.

The Bulldogs improve to 13-3 and will travel to No. 2 Woodstock for the Division I semifinal. Woodstock dealt BBA one of its losses, a 10-3 defeat a couple of weeks ago.