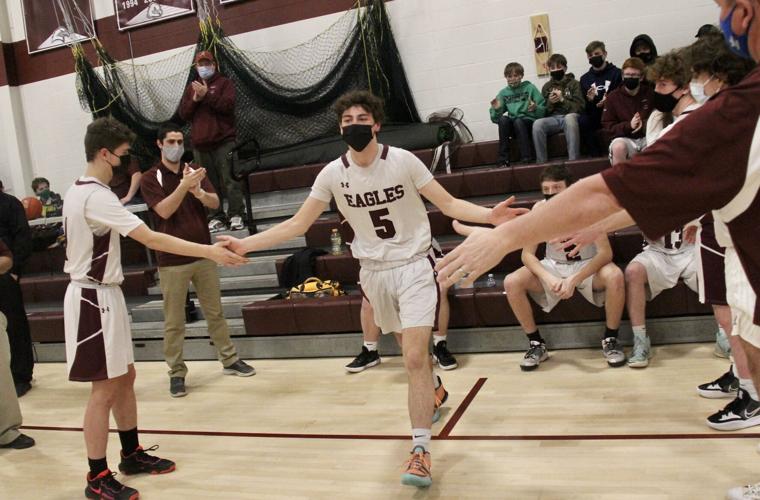 Arlington's Joe McCray is introduced as a starter prior to Thursday's game against Proctor. 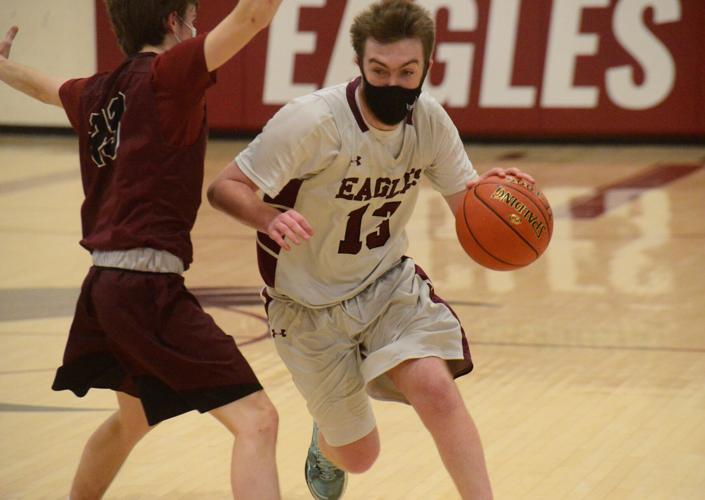 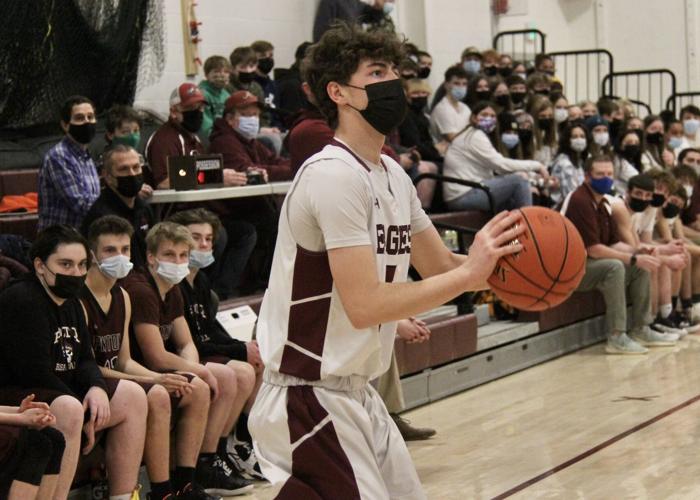 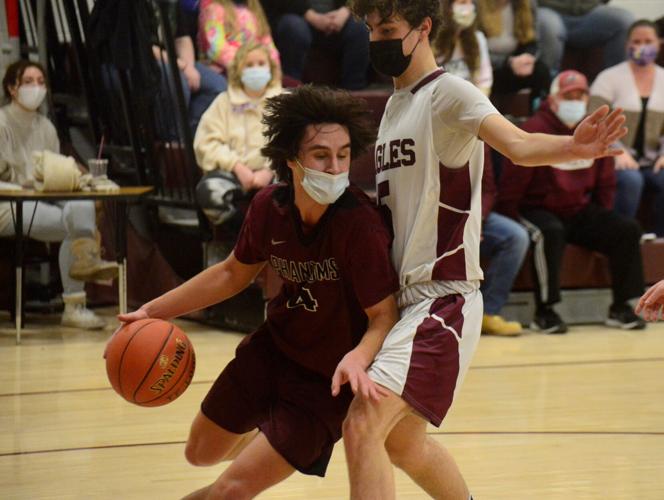 Proctor's Levi Petit looks for space as he drives to the lane. 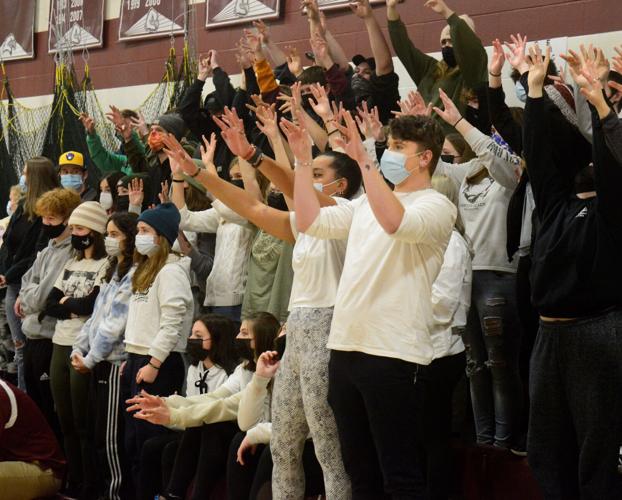 The Arlington student section cheers during overtime during Thursday's game.

Arlington's Joe McCray is introduced as a starter prior to Thursday's game against Proctor.

Proctor's Levi Petit looks for space as he drives to the lane.

The Arlington student section cheers during overtime during Thursday's game.

ARLINGTON — Joe McCray isn’t afraid to let it fly from deep. Shooters shoot and that’s exactly what the Arlington playmaker did on Thursday night in a basketball thriller against Proctor.

In a game that saw its fair share of crazy momentum swings, it was the smooth shooting motion of McCray elevating from his feet in the right corner, behind the 3-point line, with two minutes and 18 seconds remaining in overtime that sealed the deal. McCray was unbothered by a Proctor defender sprinting at him on a closeout. With a hand in his face the Eagle splashed home the 3-pointer to give Arlington a 50-46 lead, and they wouldn’t look back.

McCray’s make was the nail in the coffin for Proctor as Arlington withstood a fourth quarter comeback from the perennial Division IV powershouse, hanging on for a 53-46 win.

“I think it’s huge going down the road,” LaCoste said. “ It proves that we can play with them.”

Proctor clawed back from a 10-point deficit at the start of the fourth quarter.

Griff Briggs drove the baseline with 2:20 left in regulation, focusing the defensive attention on him. He made a great pass to a slashing Jake Morse who finished the layup, extending the Eagles’ lead to 46-38.

With their back against the wall, the Phantoms mounted a furious comeback.

With exactly two minutes left, Proctor’s Bryson Bourn made a 2-pointer with a foot on the line, trimming the Arlington lead to six.

Crossmon’s 3-pointer was the momentum shifter, as Arlington traveled 10 seconds into its offensive possession giving the ball back to the Phantoms.

Proctor coach Jake Eaton called timeout and drew up a play. The ball found its way into guard Levi Petit’s hands, who made a spin-move to the left side of the hoop and finished in the paint with 68 seconds left.

The entire crowd was on the edge of its seat over the final minute of play. Crossmpn caused an Arlington turnover on the right sideline, deflecting a pass and eventually gaining control of the ball with 23.7 on the clock.

It was shaping up for Proctor to have the final possession. The visitors had the chance to cap off an outstanding comeback but McCray came up clutch again for the Eagles, this time on the defensive end of the floor.

Out of the timeout, McCray tipped the in-bounds pass, forcing a steal. Proctor immediately fouled, sending Morse to the foul line in a one-and-one situation with 20.8 ticks left on the game clock.

Morse missed the front end and Proctor grabbed the rebound. Petit once again found his way into the lane in the final seconds, but his contested layup attempt was no good.

A scrum for the ball ensued, with bodies from both teams hitting the floor in a desperate attempt to gain control. Ultimately, the ball found Proctor’s Bourn who drove into the paint and was fouled on his shot attempt with just 1.2 seconds left.

With Arlington ahead 46-45, Bourn stepped to the line with a chance to steal a win for the visitors.

The Eagles Nest erupted, and Bourn missed the front end. But the Phantoms junior showed great composure, sinking the second and knotting the game at 46 apiece.

Briggs tossed a perfect full-court pass into the arms of Tyler Seeley, who had a decent look at a game-winner from three. The shot was long, though, sending the game into overtime.

The Eagles defense locked Proctor down in the extra period, not allowing a single point.

“That’s been our go-to, is playing defense,” LaCoste said. “I think that’s what we hang our hat on the most.”

It was a two-man show over the opening five minutes of action.McCray got things started for the Eagles early, scoring the teams first nine points of the night, all from deep. Petit made his living driving to the lane and scoring in the paint. The Proctor guard scored his team’s first 12 points of the night. Petit took advantage of fast breaks, scoring on a pair in transition. He also finished a second-chance opportunity on an offensive rebound and used a shifty euro-step to freeze a couple Eagle defenders and finish at the rim with Arlington’s half court defense set.

It wasn’t until the 3:05 mark of the first quarter that another player scored, as Seeley put a layup off the glass on the left side of the court for Arlington.

By the end of the first, Proctor built a 15-11 advantage.

The Phantoms came out of the second quarter as the livelier team, putting five points up over the opening 50 seconds, forcing Arlington to burn a timeout down 20-11.

Arlington responded in a big way out of the timeout. Cooper Jennings scored his first basket of the night on a midrange jumper. That energized the Eagles forward for the rest of the night on his way to a team-high 16 point performance. Many of his makes were inside the paint, either on second chance opportunities or post touches.

Jennings’ jumper also kickstarted a 30- 8 Arlington run over the next 15 minutes of action, extending into the start of the fourth quarter. By the half Arlington took the lead 25-24. The run continued throughout the entire third quarter, where the Eagles outscored the Phantoms 13-4 to build their double digit lead.

Along with Jennings’ 16, McCray had 15 for the Eagles. All of his points came from behind the 3-point line.

Briggs finished his night with only six points, but his impact extended beyond scoring. He pushed the pace and consistently made the right reads while slashing through the Proctor defense, often creating easy looks for his teammates.

Morse pitched in with seven timely points for the Eagles, who improved to 8-4 on the season.

Next up is a Saturday morning game at Leland and Gray. Tip off is set for 11 a.m.