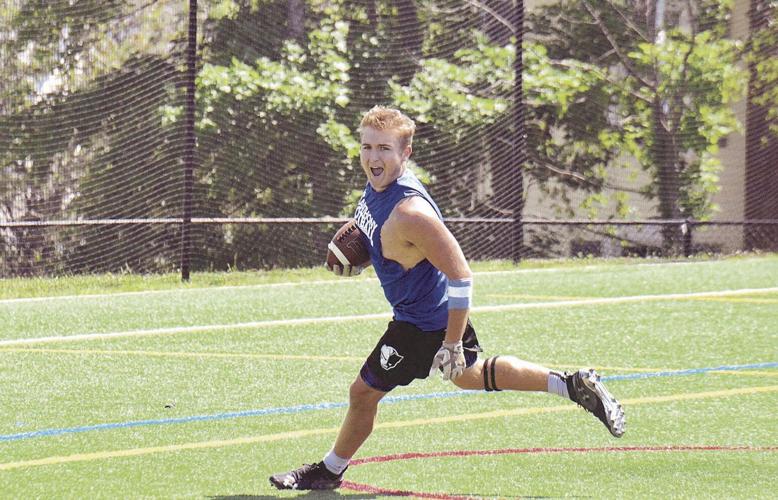 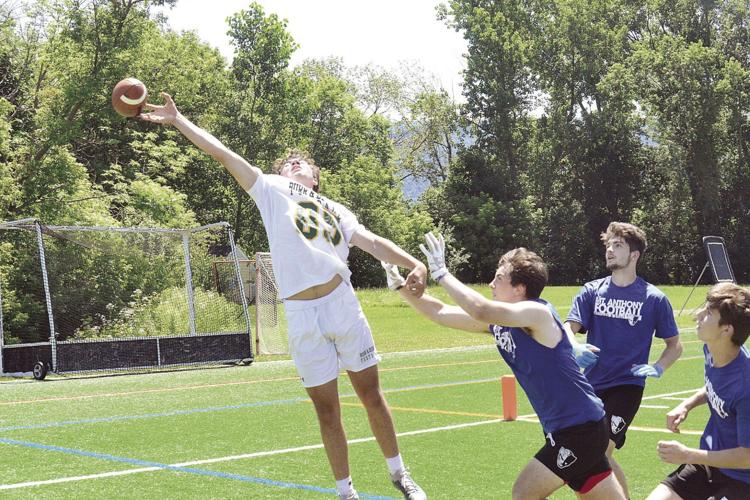 Above: A Burr and Burton receiver fully extends as he attempts to make a contested catch with several MAU defenders nearby. Inset: Mount Anthony’s Connor Barrett celebrates after crossing the end zone during Saturday’s Vermont All-Star Football Camp 7v7 tournament. 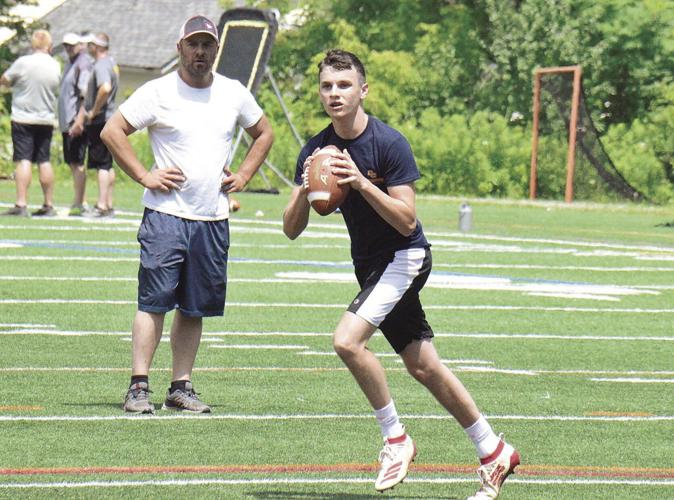 Tamarac/Hoosick Falls’ quarterback scans the field with his coach looking on in the background. 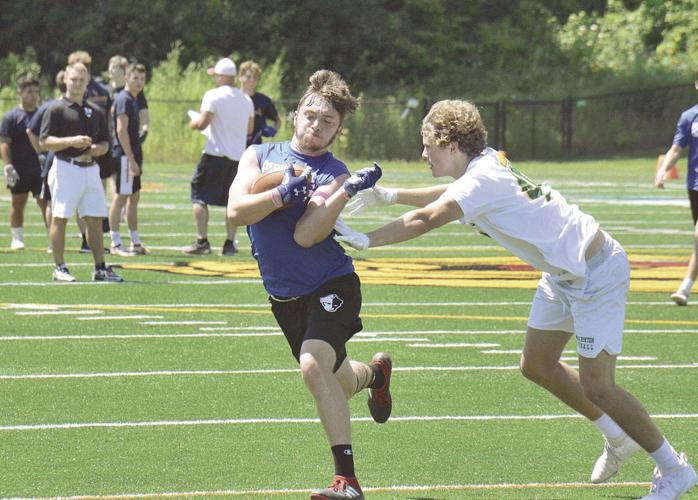 A MAU receiver is tackled by a BBA defender in the open field. 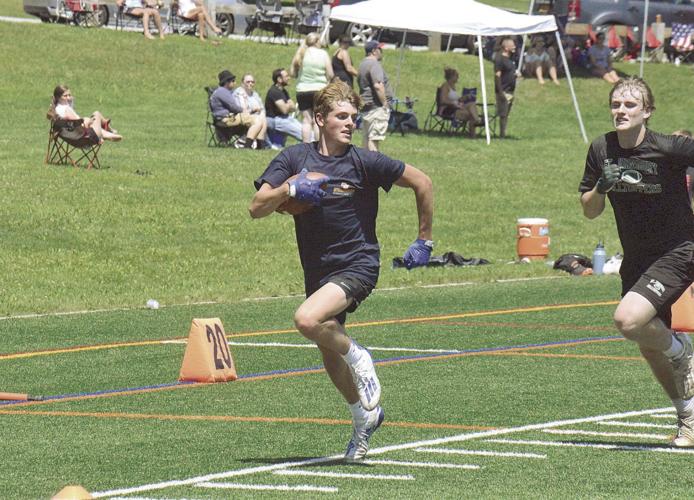 A Tamarac receiver runs down the sidelines as a St. Johnsbury defender chases.

Above: A Burr and Burton receiver fully extends as he attempts to make a contested catch with several MAU defenders nearby. Inset: Mount Anthony’s Connor Barrett celebrates after crossing the end zone during Saturday’s Vermont All-Star Football Camp 7v7 tournament.

Tamarac/Hoosick Falls’ quarterback scans the field with his coach looking on in the background.

A MAU receiver is tackled by a BBA defender in the open field.

A Tamarac receiver runs down the sidelines as a St. Johnsbury defender chases.

MANCHESTER — The Vermont All-Star Football Camp returned in a big way on Saturday, with the inaugural 7v7 tournament at Taylor Field.

Mount Anthony walked away with the trophy, defeating Tamarac/Hoosick Falls 38-3 in the championship match, concluding six hours of competitive football between the five participating schools. St. Johnsbury Academy, Cambridge and host Burr and Burton also took part in the tournament.

Each team played at least five games: four to determine seeding in a round-robin setup, and at least one playoff contest. The games featured two 10-minutes halves with running clock during the first eight minutes and traditional clock management during the last two. That gave everyone at Taylor Field on Saturday plenty of summertime football.

Chris Redding, who purchased the camp in February, was pleased with how the first 7v7 tournament played out.

“Overall it was a fantastic event. We got great participation from everyone who came, you could see the energy throughout the day,” Redding said. “You saw five teams that came to compete, and the level of competition was really fair across the board. We had five programs that were incredibly well represented today.”

Patriots coach Chad Gordon looked at Saturday’s tournament as an opportunity for his team to improve.

“That’s what this is good for, getting guys competing at all these positions,” Gordon said.

MAU’s Austin Grogan was named the tournament’s most valuable player for his stellar performance throughout the Patriots’ six games played. Grogan made tough catches all afternoon on the offensive side of the ball, and showed great instincts with a handful of interceptions on defense. The rising senior will be a key piece for the Patriots this fall and hopes Saturday’s performance can generate some confidence for his team heading into the 2021 season.

“This was fun today, playing with the guys,” Grogan said. “I think this gave us a real confidence boost leading into the season, we should be able to build off that going into this year.”

Burr and Burton coach Tom McCoy hopes Saturday marks the beginning of a long relationship between BBA and the Vermont All Star Football Camp 7v7 tournament.

“This is great. My hat goes off to Chris Redding for putting this together,” McCoy said. “I hope it becomes a tradition, something that we can do every year. I know BBA will certainly support it. It’s just a great opportunity to get our guys together to come on out here and compete and play football.”

Redding’s high school football career included stops at both MAU and BBA before going to play college football at the University of New Hampshire. Redding said it was special to bring both programs to Saturday’s tournament.

The 7v7 tournament is just the beginning for Redding and the camp. Sunday, the 27th annual Vermont All-Star passing academy with alecio offensive line clinic will take place at Rutland High School.

Then the 36th annual Southern Vermont week-long camp will run Monday through Friday, also in Rutland. Wednesday will include the 17th annual pro-style combine and college night.

The following week will be the Northern Vermont camp, hosting the same events at South Burlington High School.

“We got to put five teams with about 100 football players on the field today and it was a great way to kick things off for us,” Redding said. “I think it was a way to start the summer — on a beautiful day at Burr and Burton Academy — and it’ll only carry over into what we do on Sunday, and then next week and then the following week in South Burlington.”