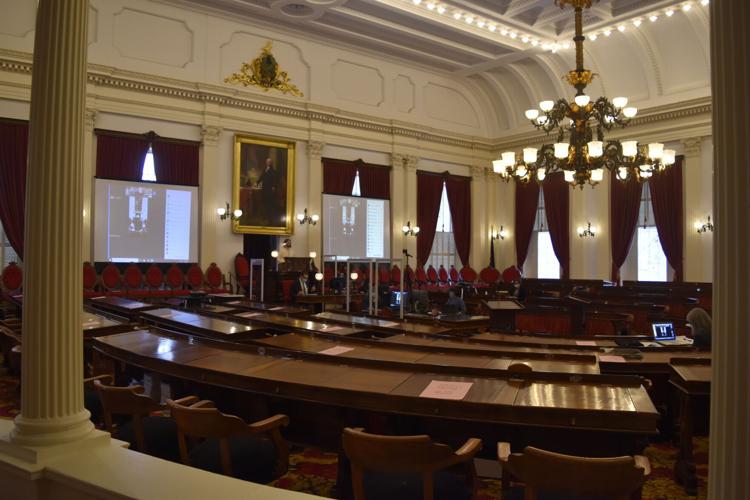 The State House of Representatives chamber was nearly empty for Gov. Phil Scott's address to lawmakers on Thursday. Usually it would be at standing room capacity for the event. 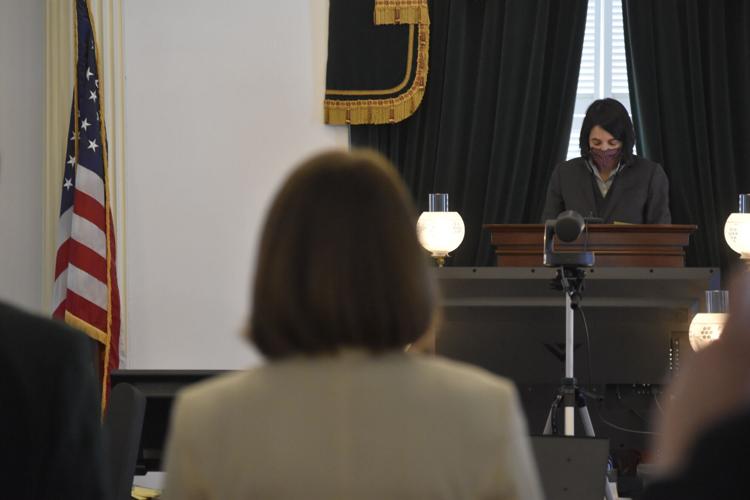 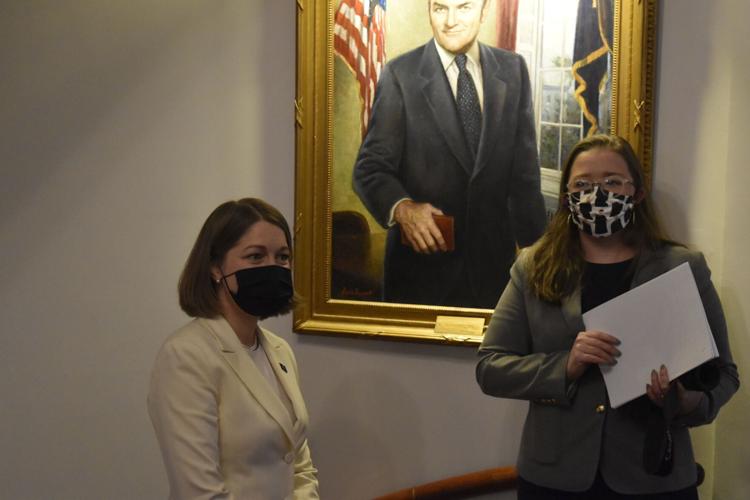 Lt. Gov. Molly Gray, left, and her campaign manager, Samantha Sheehan, pause at the top of the stairs near the state Senate chamber on Thursday, Jan. 7. Behind them is a portrait of Gov. Thomas Salmon, who served from 1973-77.

The State House of Representatives chamber was nearly empty for Gov. Phil Scott's address to lawmakers on Thursday. Usually it would be at standing room capacity for the event.

Lt. Gov. Molly Gray, left, and her campaign manager, Samantha Sheehan, pause at the top of the stairs near the state Senate chamber on Thursday, Jan. 7. Behind them is a portrait of Gov. Thomas Salmon, who served from 1973-77.

MONTPELIER — Now that leaders are sworn in, speeches have been made and committees have been assigned, Vermont’s state government can really roll up its sleeves and get to work.

First and foremost on the list is a Town Meeting bill that will allow Vermont communities to hold the event safely, or potentially reschedule it.

Members of the state House and Senate Government Operations committees have already been working on H. 48. The bill assures towns will be able to move the date of their town meeting, mail ballots to all registered voters, and allow the Secretary of State’s office to “order or permit supplemental elections procedures related to these 2021 annual municipal meeting provisions.”

If all goes according to plan, H. 48 is expected to come to the House floor on Tuesday, according to Rep. John Gannon, the House vice-chair. It was submitted by the committee’s chairperson, Rep. Sarah Copeland Hanzas, D-Bradford.

Quick action is needed because Town Meeting Day is just 50 days away, and town and city clerks, select boards and school boards need time to approve and print warnings, and prepare ballots for voters.

There’s plenty of Windham County involvement in this effort, with Gannon, D-Wilmington, on the House side, and state Sen. Jeanette White, D-Windham, chairing the Senate Government Operations panel.

Gannon and White have kept their constituents in mind: The bill specifically states “the Town of Brattleboro may hold its annual Representative Town Meeting by electronic means.”

The tricky part, Gannon said, was crafting a bill that is simple and straightforward, but allows latitude for each community’s norms and traditions.

“It’s important to understand that every town and every school district holds town meeting in a slightly different way,” Gannon said. “As we were working on the bill I learned that a lot of towns do things vastly different than the towns I represent.”

“That’s why we built flexibility into the bill,” he said. “Instead of mandating towns do one thing or another, it gave them the flexibility to choose how wanted to run town meeting. If they want to move to Australian ballot and mail ballots out to all registered voters, they can. They can delay and hold [town meeting] when pandemic has dwindled or can hold it outside so people are appropriately distanced. But we wanted to give towns choices.”

Also on the horizon: The state Emergency Board meets on January 19 to revisit the all-important topic of revenue projections for fiscal 2021. As reported at the end of last week, halfway through the fiscal year, the Legislative Joint Fiscal Office reports revenues are $163.7 million ahead of projections for the fiscal year.

Those projections, a consensus best guess by economists for the Scott administration and the Legislature, were based on the likelihood that the pandemic would greatly diminish tax revenues.

Here’s why a recalculation of those projections matters: If the projections are revised upward, that will likely inform the annual budget adjustment act, as well as decisions made by Gov. Phil Scott and the Legislature on what to spend and what to save in fiscal 2022.

That very neatly leads us to a big question facing state government in 2021: How ambitious shall Vermont’s government be in promoting the state’s COVID recovery?

All seem to agree that helping struggling Vermonters meet basic needs should come first and foremost. What should happen beyond that, and how much, is the question.

There’s a school of thought that given economic uncertainty and a continuing pandemic and the difficulty of governing over Zoom, the Legislature should attend to its core business of budgeting and allocating relief funds, and stop there.

A slightly more ambitious agenda, put forth in a letter signed by more than 20 Vermont business and industry associations, including the Vermont Chamber of Commerce, said the upcoming session should, beyond critical needs and allocating recovery dollars, address potential “cost shocks” on the horizon, most notably by “deferring scheduled automatic increases in UI taxes;” avoid new taxes, fees, mandates, or new laws and regulations that would make it harder for businesses; and plan for and invest in the state’s economic future.

But elected officials have talked about a number of initiatives, some of which are likely to carry a price tag. They include universal broadband access, affordable child care access, and investment in the Vermont State Colleges System.

Keep this in mind as well: Legislative leaders, Gov. Scott and Lt. Gov. Molly Gray all emphasized in their speeches that the state’s economic recovery must include all 14 counties.

THE LEGISLATURE TAKES A STAND

Republican State Rep. Mary Morrissey has seen a lot in her 25 years in the House. That includes situations in which protesters barged their way into the House chamber and disrupted the Legislature’s business.

But when she saw the news alert on her phone that a mob of President Donald Trump’s supporters had overrun police and forced their way into the U.S. Capitol, and again, when she found time to turn on the TV, Morrissey’s reaction was one of shock: “Oh, dear God.”

Morrissey was among 121 members who signed onto a joint resolution condemning the assault on democracy and echoing Scott’s calls that Trump resign or be removed. Members of all three parties and independents sponsored the bill and signed on as additional sponsors.

“We obviously want peoples’ First Amendment rights to be protected,” Morrissey said. “But when it comes down to generating a takeover of the Congress and breaking into the building through the windows … it would be wrong in any form.”

The resolution passed the House 130-16. The Vermont Democratic Party said in a press release that 16 Republicans had voted against the resolution, but it was unclear how they arrived at that conclusion, as a roll call was not taken.

Every party has factions. That’s also true of the Vermont GOP, where a significant number of conservatives supported John Klar's primary challenge to Scott, a moderate.

“For me, I try to respect other opinions,” Morrissey said. “I may not agree with it no matter what the topic is but I respect people. … Unfortunately, when people draw lines in the sand, that never helps us in working together across the aisle to do what we’re there for — serving our constituents.”

Morrissey hopes the caucus can move forward. “How people voted or didn’t, whether they signed on or didn’t, that was what they felt,” she said.

In the 30-person Senate, there appeared to be one no vote: Newly elected state Sen. Russ Ingalls, R-Essex/Orleans.

Lieutenant Governor Molly Gray also had a personal connection to Wednesday’s attack on the U.S. Capitol, as she worked for U.S. Rep. Peter Welch in Washington.

“To see people smashing the windows of the building and entering with an intent to cause harm and to disrupt the certification of an election that Americans in every corner of our country participated in ... it was as much an attack on the process, on our elections and our democracy as much as was an attack on Congress,” Gray said.

“As we begin this session, I think it’s so important to work across the aisle to listen to Vermonters, but also to closely protect the Constitution, the oaths that we take ... and do everything we can to nurture this government and democracy,” Gray said.

The Statehouse is closed to the public and the Legislature is working remotely. So aside from special occasions like Wednesday and Thursday’s inaugural events, the media and the public won’t have a lot of access to the building for the foreseeable future.

When the pandemic ends, if you’ve never been to Montpelier to see where your government works, it's worth the trip. You can feel the echoes of history as you roam the halls, and marvel at the effort and artisanship with which Vermont recognizes and celebrates its participatory democracy.

For Gray, the echoes offered reassurance as she stood at the top of the stairs near the Senate chamber Thursday morning, waiting on Senate President pro tem Becca Balint to call her in for the oath of office. With her were two women who helped her win the election: Samantha Sheehan, her campaign manager, and Hazel Brewster, who worked on the campaign and is now her chief of staff.

Thursday, after she’d presided over the joint session, I asked Gray what she was thinking as she waited at the top of the steps.

“It was very special to come to the top of the stairs and see Conseulo Bailey, whose portrait rests outside the senate chamber,” Gray said.

Bailey (1899-1976) was the nation’s first woman lieutenant governor, the state’s first woman Speaker of the House, and the first woman to practice before the U.S. Supreme Court.

“She was also a lawyer, who also grew up on a farm and perhaps never anticipated or expected to be able to serve her state in the way that she did,” Gray said of Bailey. “It gave me a moment of feeling connected to history and feeling the strength of those who have come before me.”