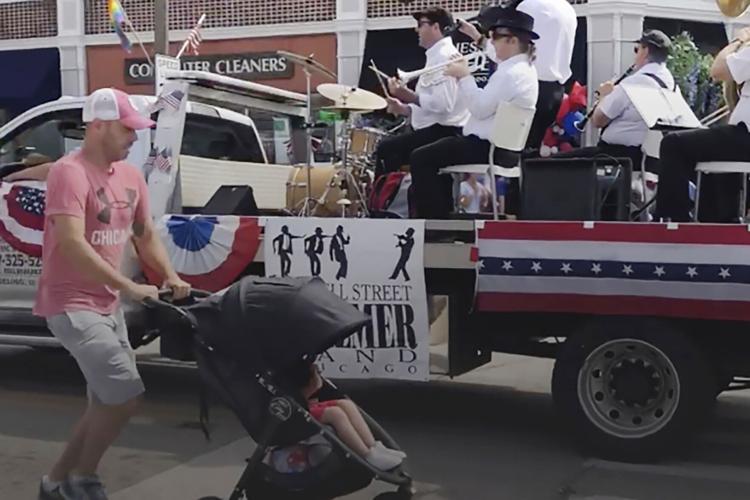 In this still image from video, a man runs for cover with a child in a stroller after gunfire was heard at the Fourth of July parade in the Chicago suburb of Highland Park on Monday morning. 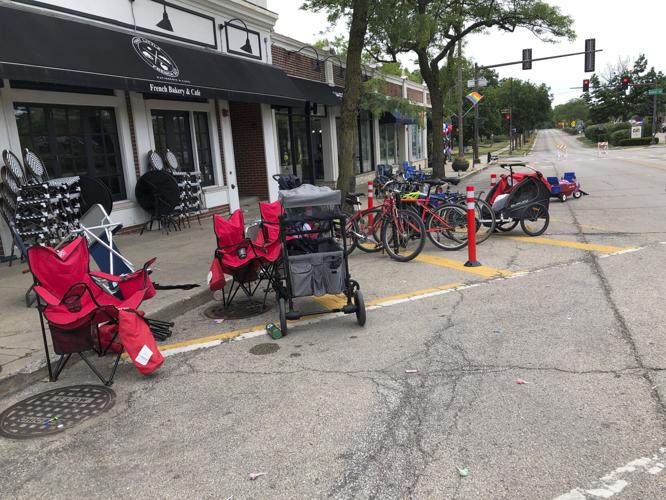 Terrified parade-goers fled Highland Park's Fourth of July parade after shots were fired, leaving behind their belongings as they sought safety on Monday in Highland Park, Ill.

In this still image from video, a man runs for cover with a child in a stroller after gunfire was heard at the Fourth of July parade in the Chicago suburb of Highland Park on Monday morning.

Terrified parade-goers fled Highland Park's Fourth of July parade after shots were fired, leaving behind their belongings as they sought safety on Monday in Highland Park, Ill.

HIGHLAND PARK, Ill. — Six people were killed and at least two dozen were injured when a gunman opened fire on a Fourth of July parade in Highland Park on Monday morning, authorities said.

The Highland Park Police said Monday afternoon that they were continuing to search for the gunman and that they had put a perimeter in place around the downtown area. People in that area were encouraged to shelter in place, they said.

Rep. Brad Schneider, who represents Highland Park, a northern Chicago suburb, in Congress, said he was at the start of the parade when someone began to shoot. He said he and his staff were safe and in contact with the city’s mayor. Mayor Lori Lightfoot of Chicago said her city’s police department was providing assistance to Highland Park.

“Law enforcement is working hard to bring the shooter into custody,” Lightfoot said.

The nearby suburbs of Evanston and Deerfield canceled their own holiday events because of the incident.

Miles Zaremski, 73, a Highland Park resident who was at the parade, said he heard what sounded like gunshots from an automatic rifle. “I was in the service a long time ago, so I know what that sound produces,” he said.

“At first I thought it was a backfire or maybe was a firecracker,” he said, “but then all of a sudden there was a stampede of the crowd who was attending on either side of the street. So I kind of gingerly walked up, and all of a sudden I saw people bloodied.”

He described the celebration as a “garden variety, suburban Fourth of July parade.” The shooting, he said, led to a “horrific” scene of terrified people and bloodied bodies. “I have never seen anything like it in my life,” he said, adding, “It was chaos.”

One attendee, Lisa Schulkin, said the mayhem began shortly after the parade started at 10 a.m.

“All of a sudden you just heard the gunshots, multiple and quick in a row, and then masses, masses of people running,” she told a local news station, WGN9. “The streets were just filled with people running, kids crying.”

Schulkin said she was in a parking lot and hid under a car with several others until about 10:45, when her husband was able to arrive nearby and she could reach his car. Local news footage showed folding chairs, parade vehicles and floats — some decorated in American flags and red, white and blue tinsel — abandoned in the street.

Highland Park is a suburb that is home to about 30,000 people. It is situated along the Lake Michigan shore, about 25 miles north of downtown Chicago.