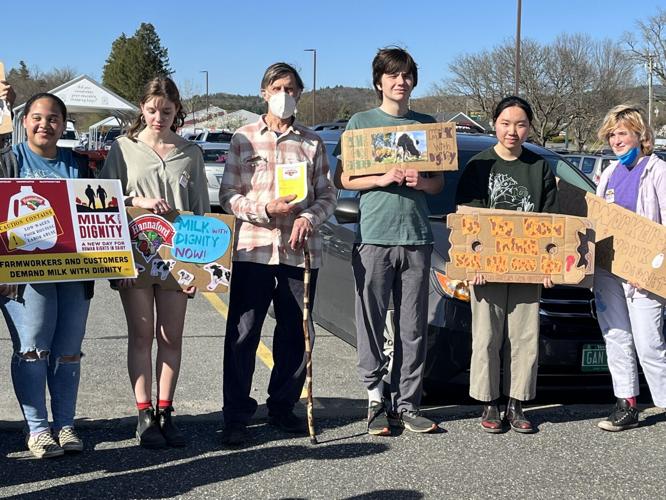 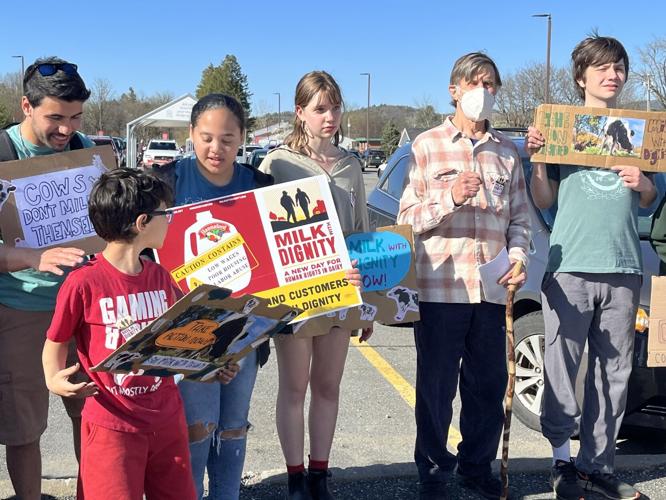 BRATTLEBORO — According to activists, the question isn’t: Got milk? It is: How were the workers treated who got the milk to you?

Dairy workers called for a day of action at more than 30 Hannaford Supermarket locations throughout the northeast Sunday in support of the “Milk with Dignity” campaign to coincide with International Workers’ Day, according to an announcement from Migrant Justice, a farmworker-led human rights organization which led the event. Farmworkers and consumers held public rallies and delivered letters to store managers to urge the company to source dairy products from farms providing dignified working conditions.

“We’re talking to the manager and asking him to join Milk with Dignity, and we’re also sharing the information with customers going and coming,” said Sarah West of Brattleboro, who is part of Lost River Racial Justice and organized Sunday’s action, which brought about 20 participants to the Brattleboro Hannaford.

West said a manager told the activists to leave the store after they tried to deliver a message about the program. Managers outside the store declined to comment and an attempt to reach media relations for the company was unsuccessful.

Activists stood in the middle of the parking lot with signs and approached customers walking back to their cars then they stood at the entrance of the parking lot on Putney Road. West said police showed up and were supportive of the activists’ freedom of speech on the public sidewalk.

“Since 2019, the group has invited Hannaford Supermarkets to join the program,” states the announcement. “In 2017, following a lengthy public campaign, Ben & Jerry’s Ice Cream agreed to implement Milk with Dignity in the company’s northeast dairy supply chain.”

Migrant Justice said by joining its Milk with Dignity program, Ben & Jerry’s committed to source all of its northeast dairy supply chain from farms complying with “a comprehensive, worker-authored code of conduct.” The company pays a premium to participating farms, Migrant Justice educates workers on their rights in the program, and a third-party auditor known as the Milk with Dignity Standards Council monitors farms’ compliance, according to the announcement.

“Hannaford has claimed to have implemented standards of engagement requiring suppliers to ‘treat workers fairly’ but has yet to take meaningful action to address the documented abuses in its dairy supply chain,” states the announcement.