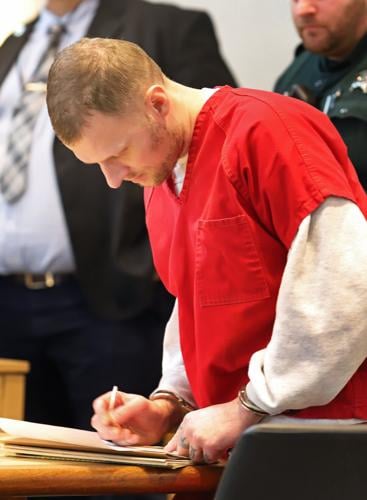 Louis Tobin signs paperwork after his arraignment on burglary charges in Bennington, related to a theft from the Woodford General Store. 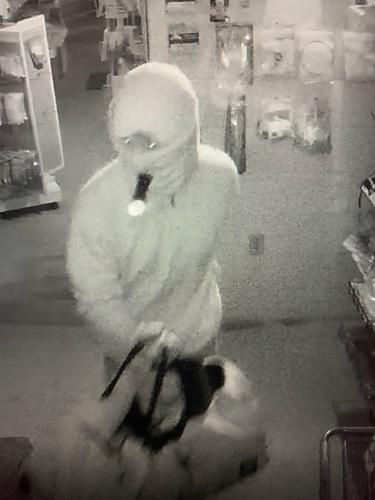 Vermont State Police says this is one of the burglars who broke into the Woodford General Store on Christmas Day 2021. 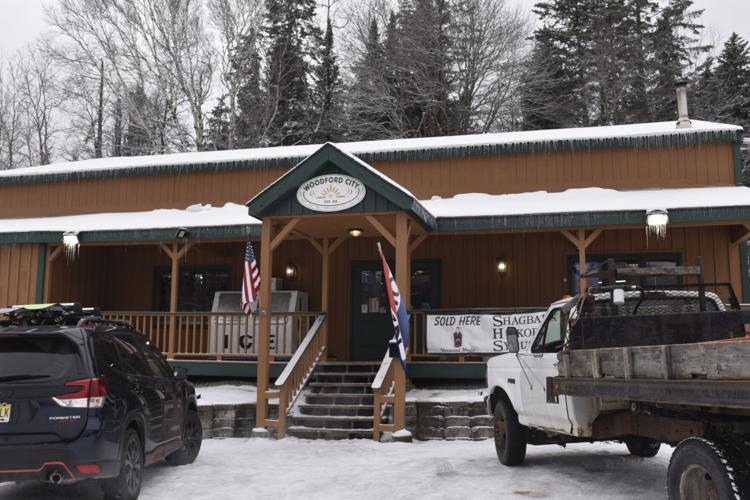 Police are investigate a Christmas morning break-in and robbery at the Woodford General Store in 2021.

Louis Tobin signs paperwork after his arraignment on burglary charges in Bennington, related to a theft from the Woodford General Store.

Vermont State Police says this is one of the burglars who broke into the Woodford General Store on Christmas Day 2021.

Police are investigate a Christmas morning break-in and robbery at the Woodford General Store in 2021.

Louis Bradley Tobin, 35, is charged with two counts, burglary and grand larceny, for the Dec. 25 incident at the general store on Route 9. Tobin pleaded not guilty to the charges through his defense lawyer Frederick Bragdon.

Already locked up, Tobin was escorted into the courtroom in chains because of a burglary case from January 2022, which is still pending; he is currently being held without bail on those charges.

According to a police affidavit, Tobin and another person gained entry to the general store by prying open a south side door. Video surveillance shows one of them running toward the registers. An alarm sounds, and both grab cigarettes, bracelets, candy and several backpacks before leaving.

Shoe prints and tire tracks in the snow were recovered at the scene. Vermont State Police learned a few weeks later that two suspects were arrested by Bennington Police after allegedly burglarizing the Vermont Mill, while wearing the same type of sneakers that made the tracks at the Woodford store.

Bennington Judge Cortland Corsones granted a search warrant for Tobin’s sneakers at the Southern State Correctional Facility in Springfield, where he was being held. The sneakers were placed into evidence.

Bennington Police further told the state police that they had seized Tobin’s truck at the scene of the mill burglary. The tire tread was compared with the tracks outside the Woodford store and matched. Inside the truck, police found several backpacks that had been missing from the Christmas burglary, which the store owner confirmed.

Tobin faces a maximum of 25 years behind bars if convicted on all charges.

“I have mixed emotions about all of this,” said store co-owner Heather Hassett. “This is not just breaking into a store and stealing some things at the moment. It impacts a community, a community where he lived, where his parents live. That it’s not fair to a community when people do these things and don’t have any qualms about it.”

Hassett, who also owns Bringing You Vermont and the Bennington Pizza House with her husband, Ryan, talked with the Banner outside the courtroom after Tobin had just been arraigned.

“We spent our Christmas dealing with the state police and dealing with the insurance company and the alarm company, and all of those people who didn’t need to have their day disrupted by his actions,” Hassett said.

Hassett feels society needs to change, because burglaries like this are happening to small businesses all the time.

“This happens in Woodford, it happens in Bennington and other small towns,” said Hassett. “We serve the community that surrounds us. When we take a hit like this, there are ripples. Keeping small, country stores like these afloat is literally done one dime at a time.”

Hassett indicated that she knew Tobin’s family and said they were “good people.”

“His family doesn’t deserve that. ... I don’t know what his story is, but he dragged me into it. He dragged my community into it. He made my mother cry on Christmas Day. I will never forget that. She’s 82-years-old. How many more does she have?” said Hassett.

Whether Tobin sold, kept or gave away what he’d allegedly taken, Hassett hope he would reflect while incarcerated.

“Just try to be a better human, that’s all,” said Hassett.