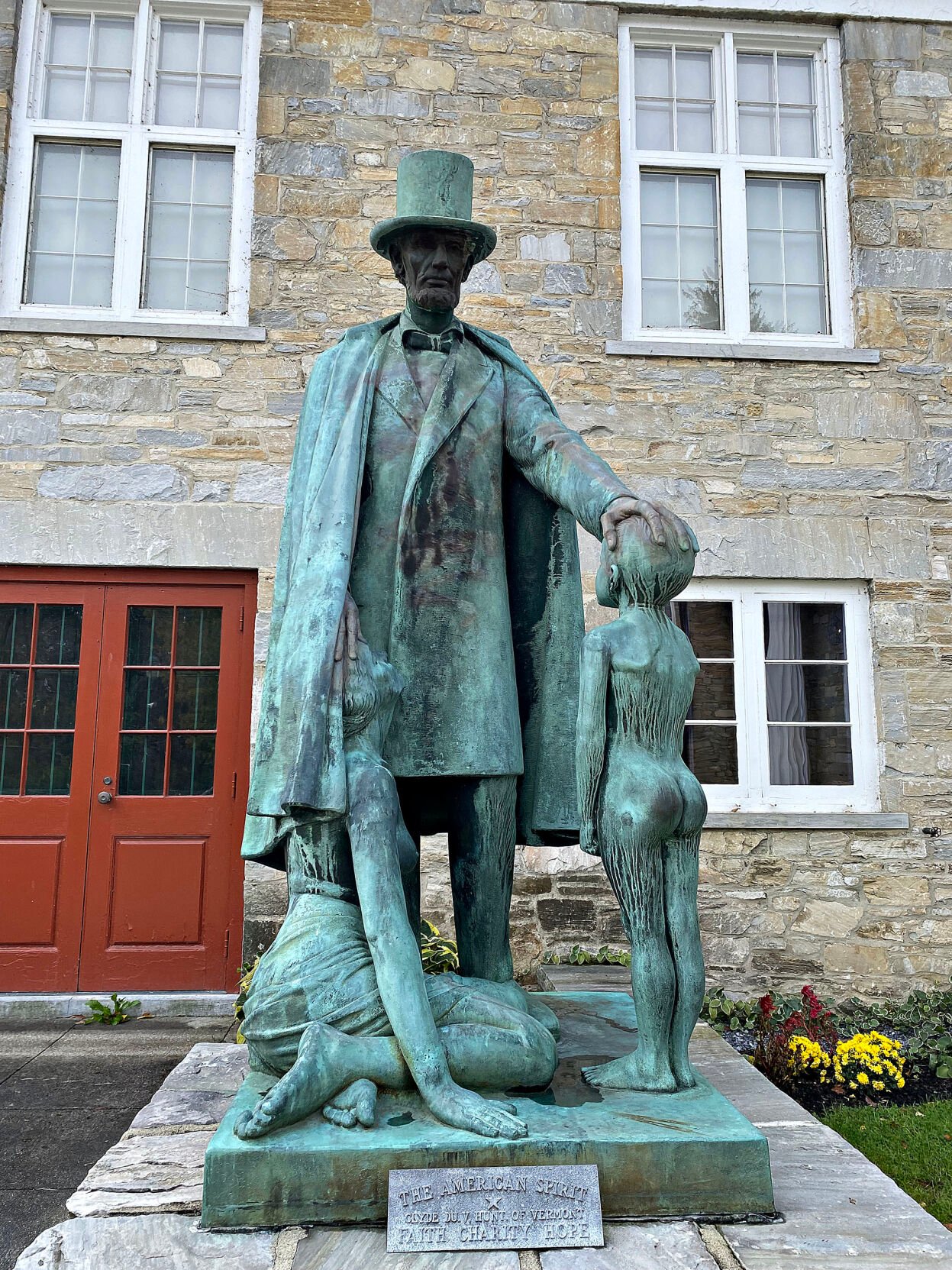 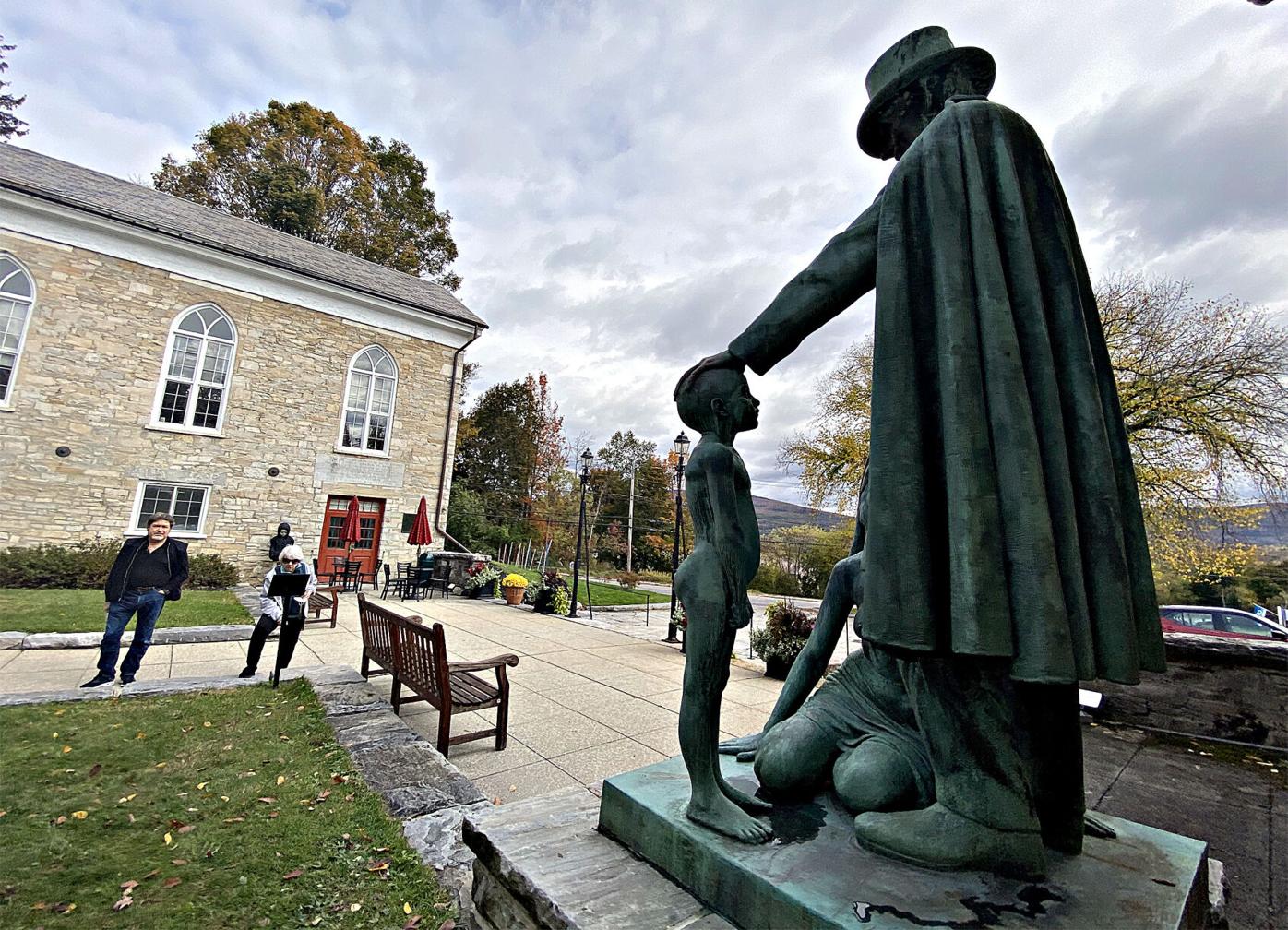 BENNINGTON — A bronze sculpture positioned outside the Bennington Museum is back on display after being vandalized last week.

But that’s not the last word on the sculpture, nor on the incident that left the depiction of President Abraham Lincoln marred with red paint amid demands that it be removed.

“This piece has elicited many different reactions from our diverse community over the years, and we are committed to turning this act of destruction into a constructive experience,” the museum said of the incident on its website. “The Museum plans to restore the statue and use it as a launching pad for interpretive programming with a focus on the complex and nuanced stories of native peoples, women, and all underrepresented groups in this region.”

The museum, having conserved the piece and removed the tarp that covered it, will use the incident as a springboard for discussion and reinterpretation of objects and works in its collection, Executive Director Martin Mahoney said Monday.

Mahoney said the process of reinterpreting “Lincoln Trilogy” had already begun with the interpretive label posted to the right of the statue. That description points out that the arrangement of figures “created an imbalance power dynamic that reflect the patriarchal society in which it was created.”

Considering new perspectives on the museum’s collection could begin as “a salon series or community discussions or forums that we could start with the Lincoln statue,” Mahoney said. “We could take any object in the museum, look at its history and use that as a springboard, too.”

Discussions of the colonial founding fathers’ legacy, or slavery in Vermont, or gender identity could all start with an object in the museum collection, Mahoney said.

“We’re going to go in that direction,” he said. “We would like to see something presented on a regular basis and accessible to the community.”

The bronze statue was conserved last week by the Williamstown (Mass.) Art Conservation Center. Most of the paint was able to be removed, and remaining work — including an application of wax — will take place in the spring.

“Lincoln Trilogy” by Clyde du Vernet Hunt, which has been exhibited on the museum grounds since 1949, depicts the 16th president with two additional figures. Joining Lincoln are Nirvana, a kneeling female figure personifying the Buddhist concept of spiritual liberation; and Fils de France, a boy symbolizing the rebirth of France after World War I. Lincoln is the only one fully clothed because he is a depiction of a historical figure rather than an abstract concept, according to the museum.

A flyer posted on utility poles in downtown Bennington on Monday, Oct. 11, while not taking credit for the vandalism, pointed to the decentralized “Indigenous Person’s Day of Rage” as the occasion for the vandalism, and note Lincoln’s involvement in the deaths of 38 Dakota men who had been tried by a military tribunal.

According to the Minnesota Historical Society, the Dakota 38 were among more than 300 Dakota men who had been sentenced to death by the tribunal for alleged crimes in the Dakota War of 1862. Lincoln had intervened with a letter to Minnesota’s governor, providing the names of 39 men to be executed; one was given a late reprieve. The men were hung on Dec. 26, 1862, in Mankato, Minn.

The flyer declared Lincoln guilty of genocide for his involvement and demanded the statue come down.

Red paint was sprayed on Lincoln’s face and hands, as was the number “38” on his chest — referring to the 38 Dakota persons put to death in 1862, the largest mass execution in the nation’s history.