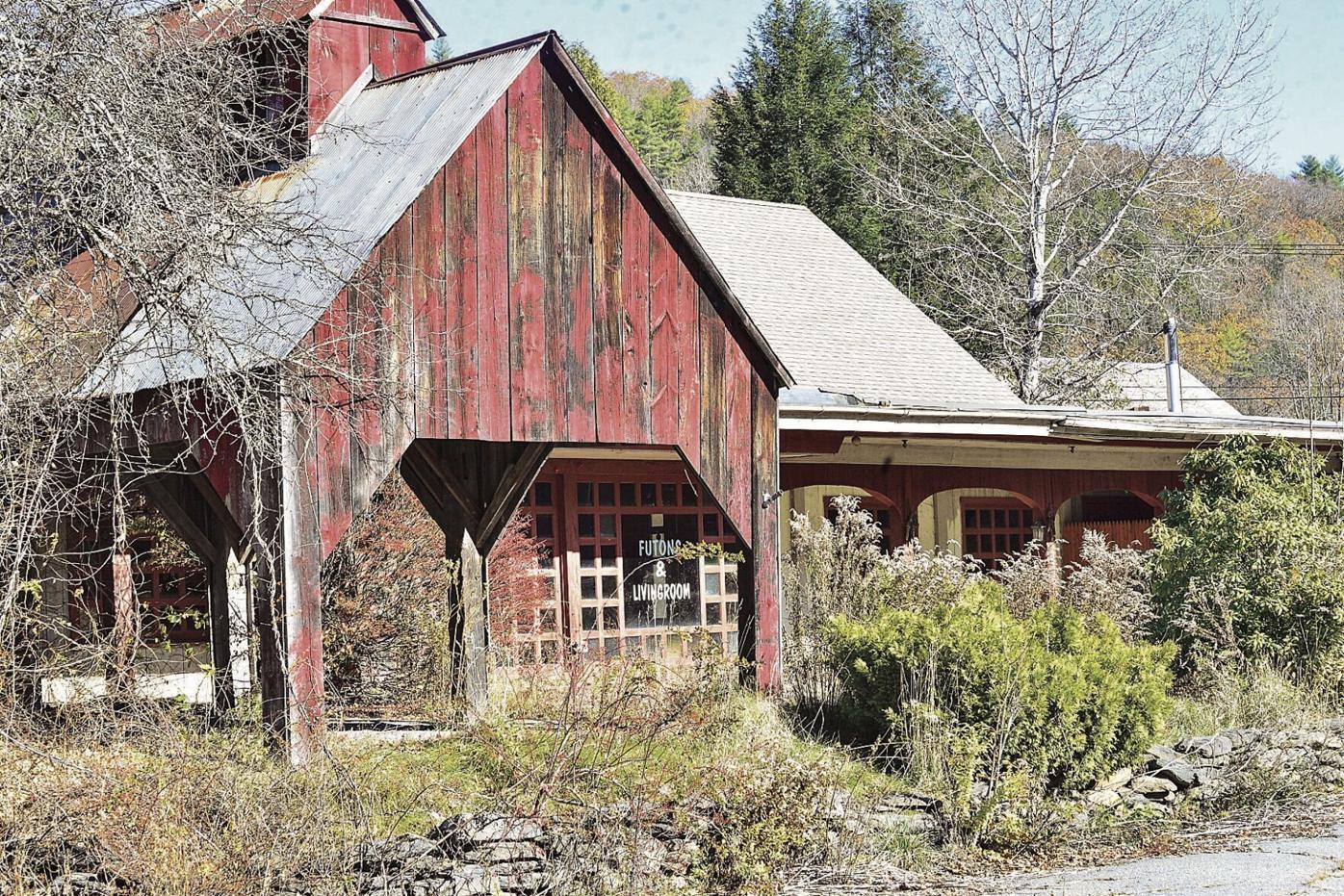 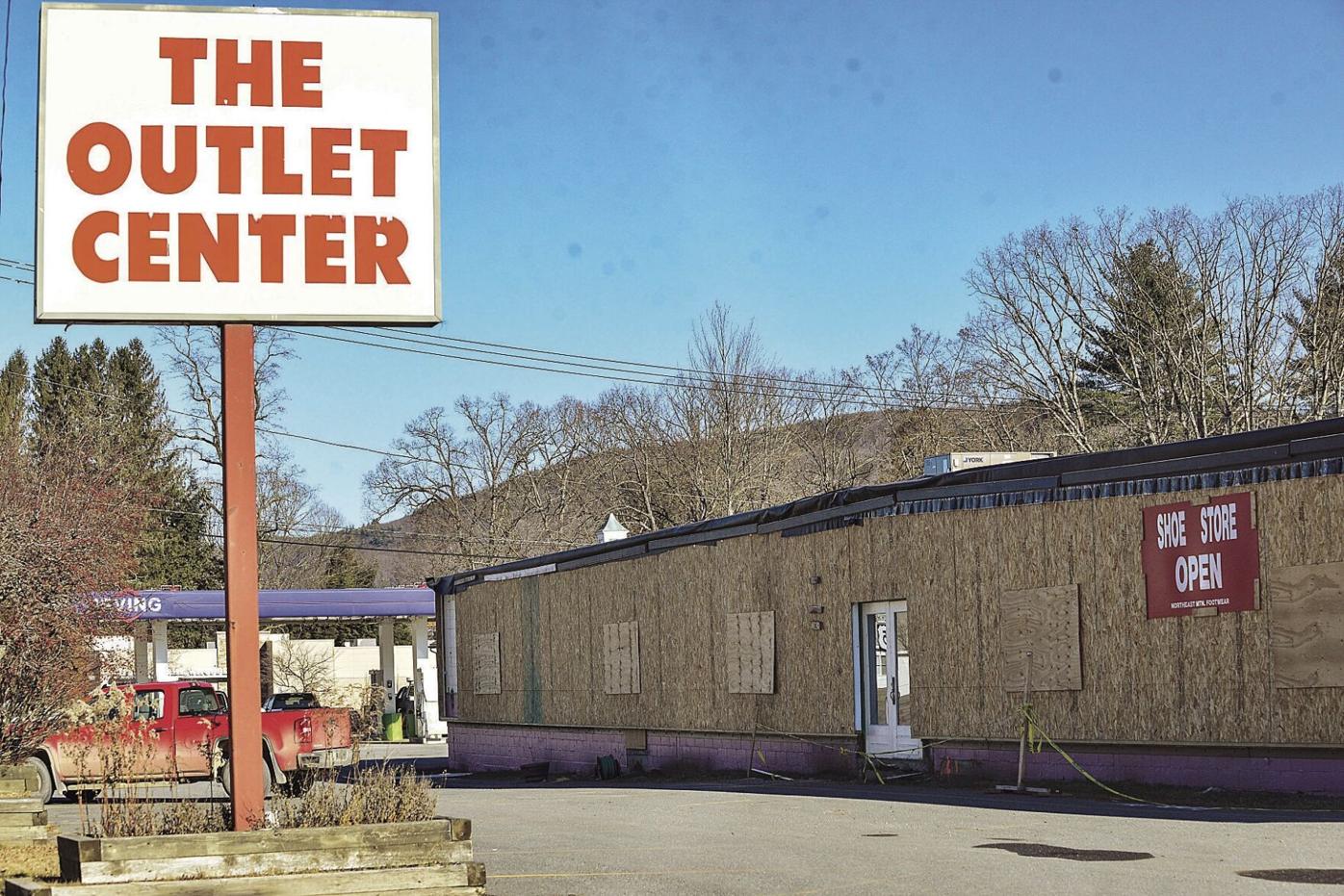 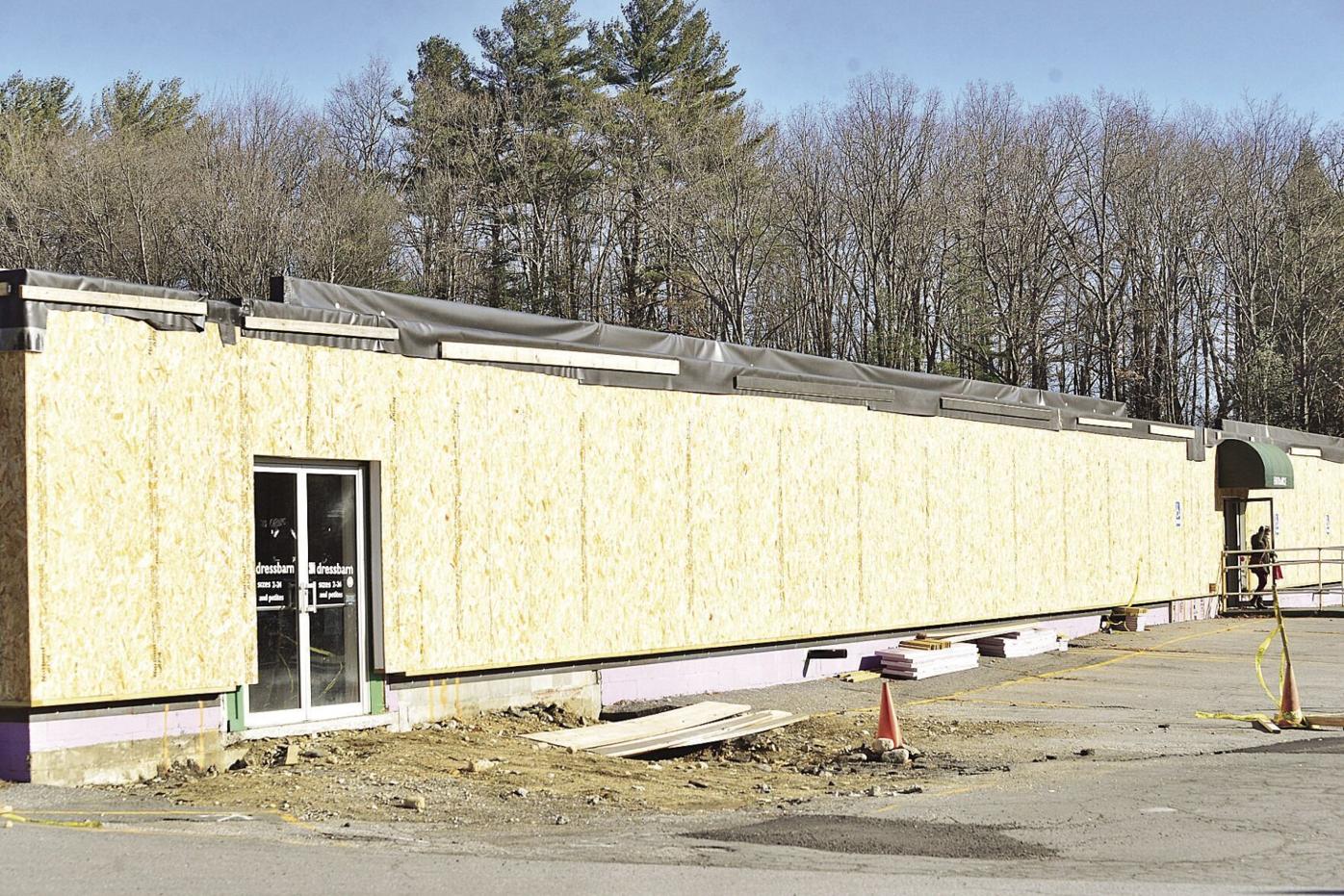 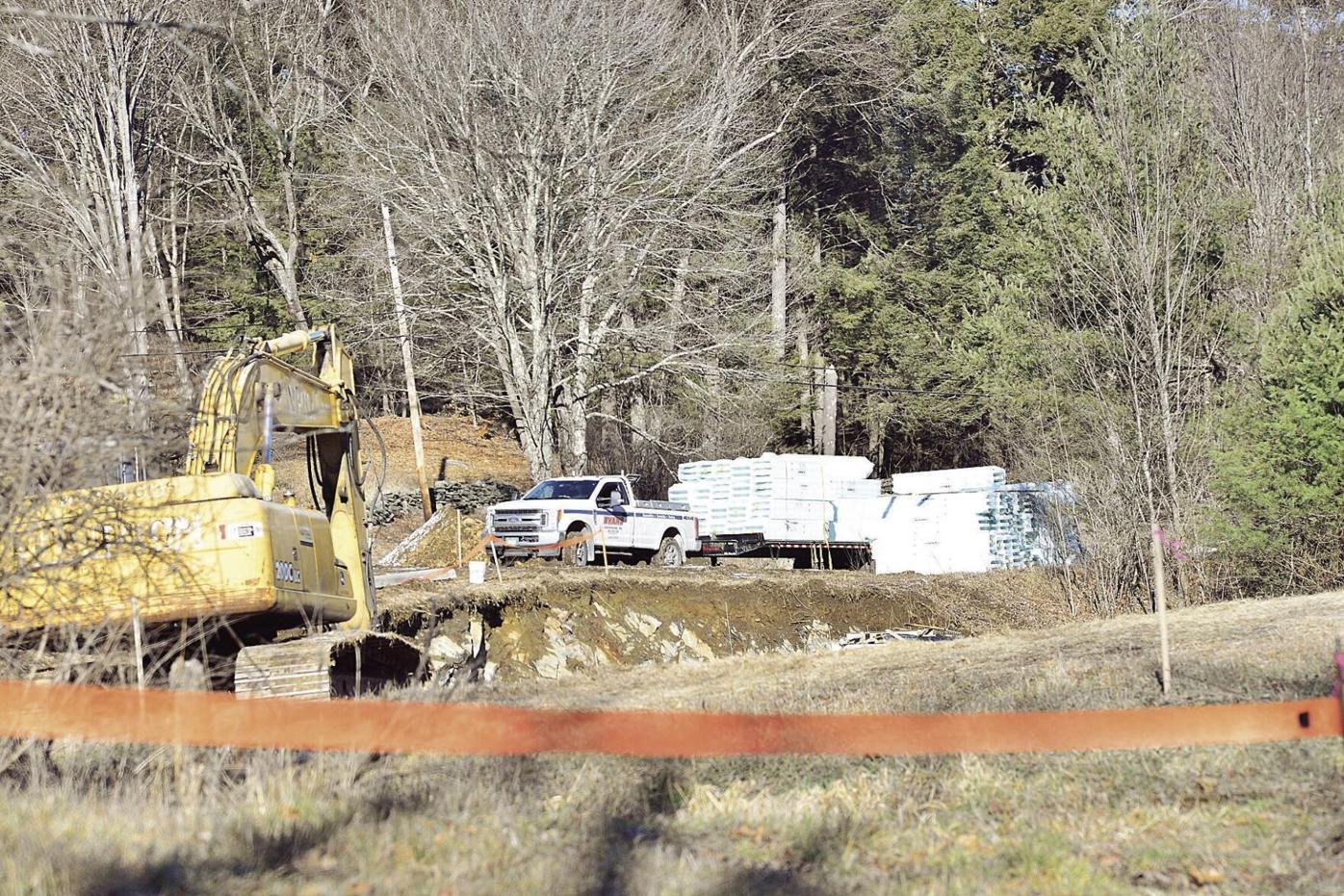 Crews work on a building on Sweet Pond Road, in Guilford. 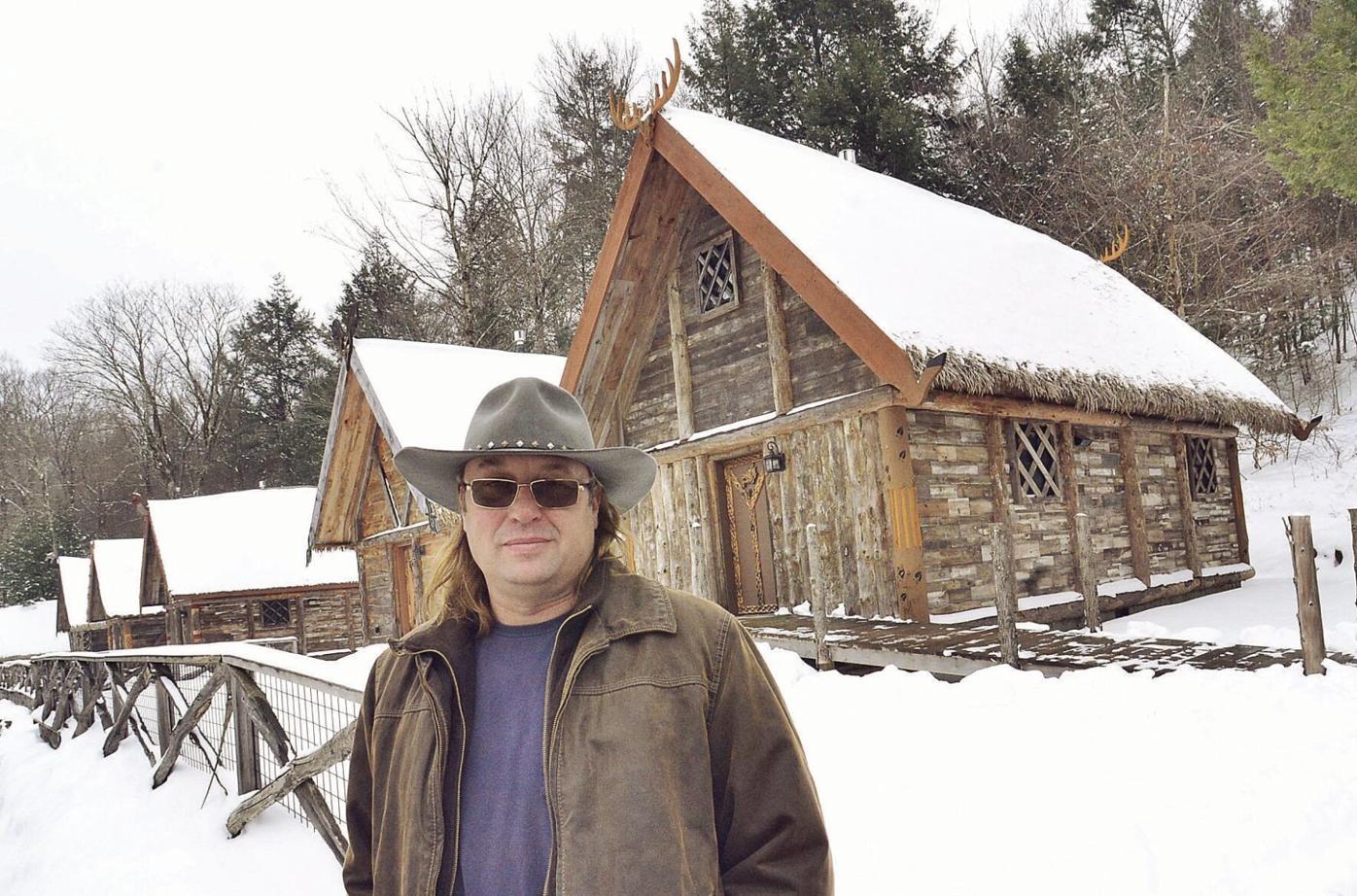 Paul Belogour at the Viking Village in Guilford. 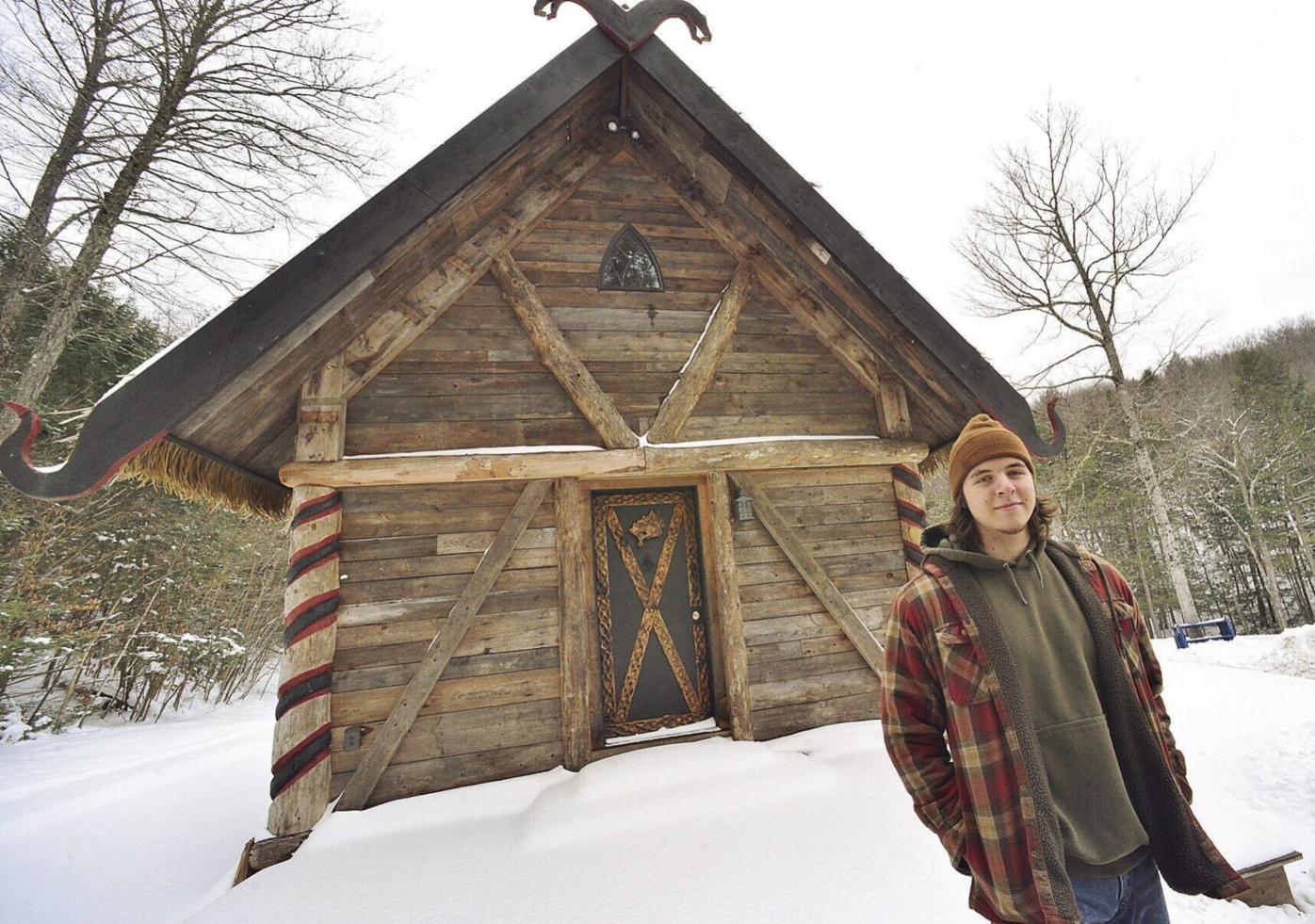 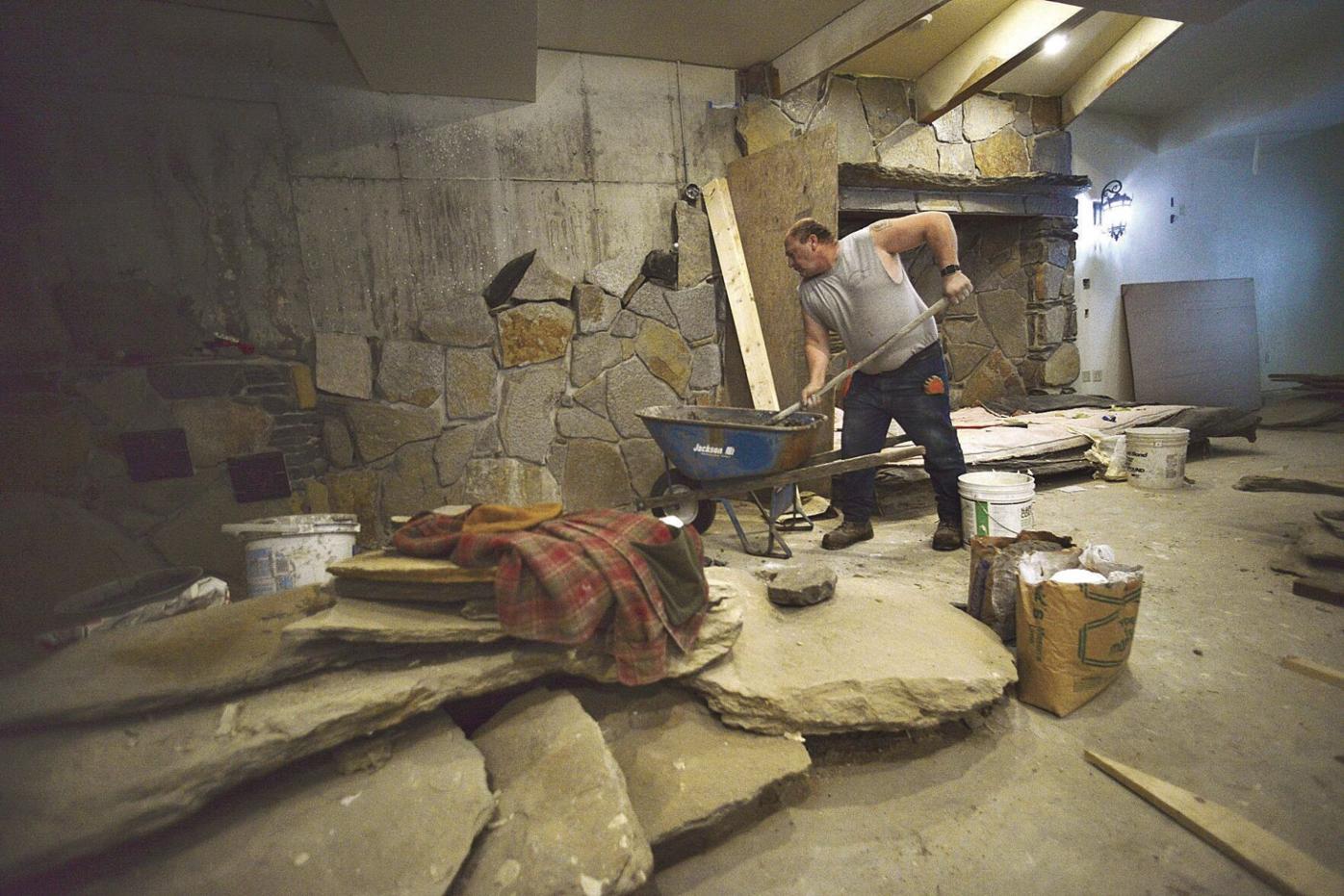 Randall Williams works on one of the two large fireplaces inside the main building of the Viking Village. 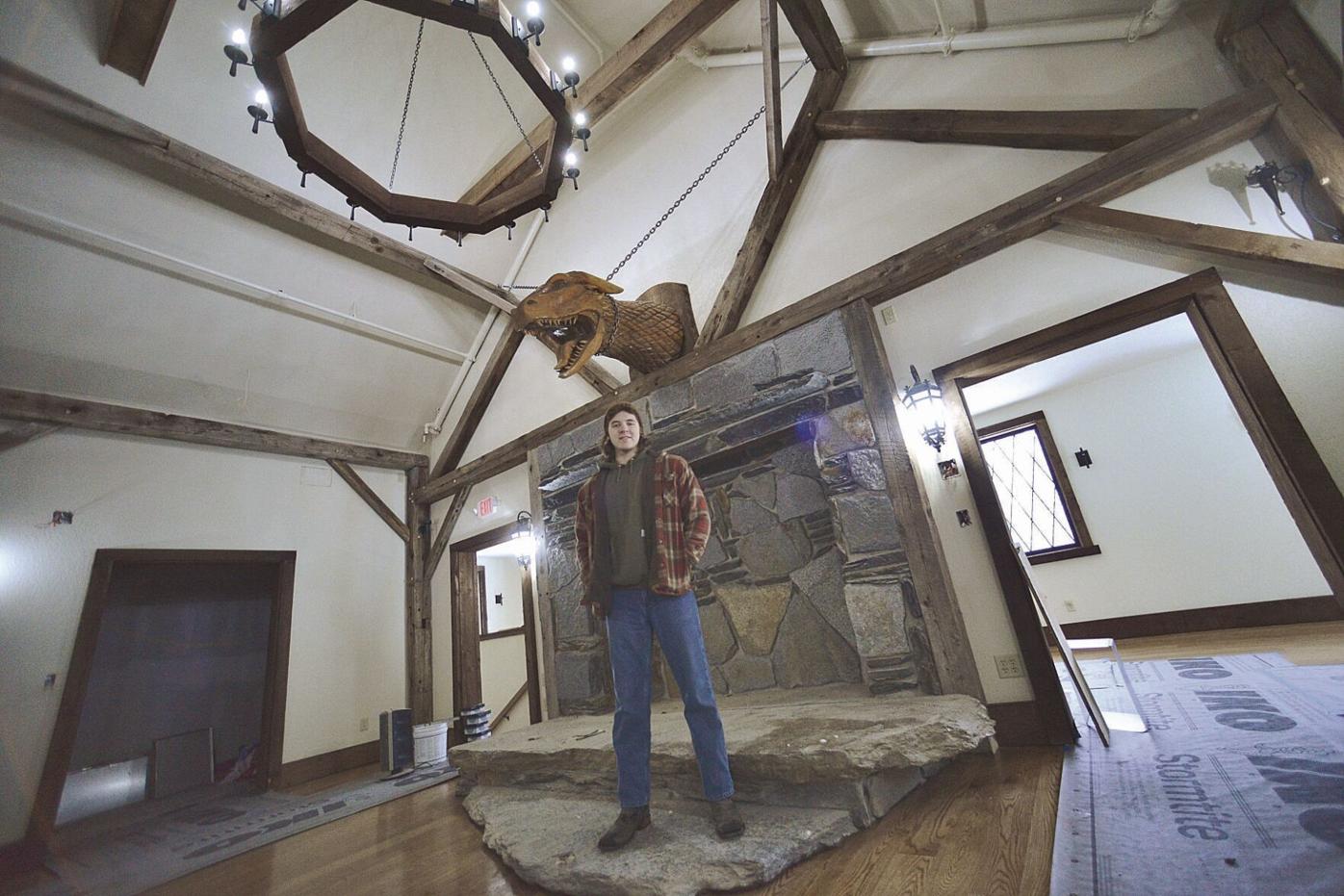 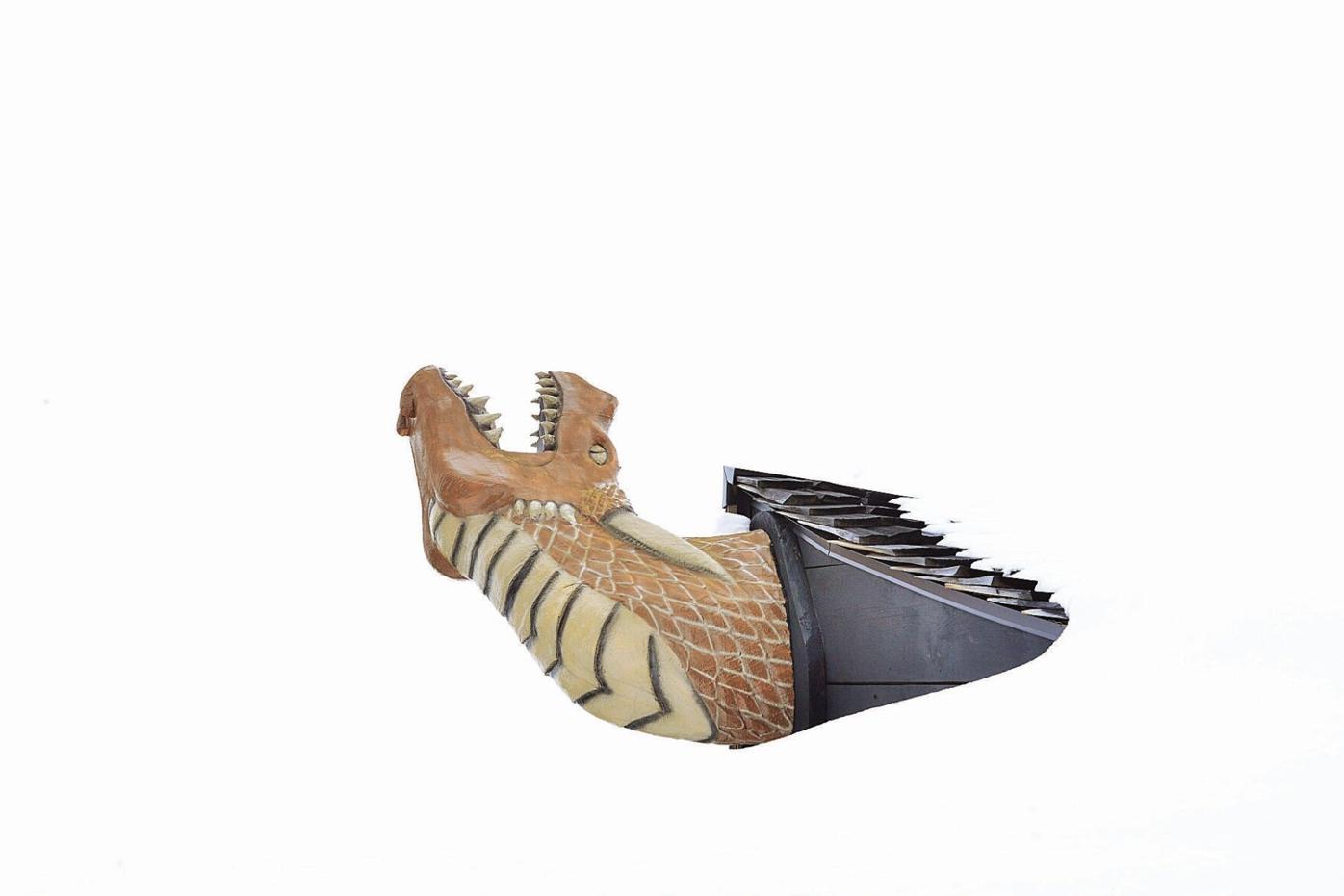 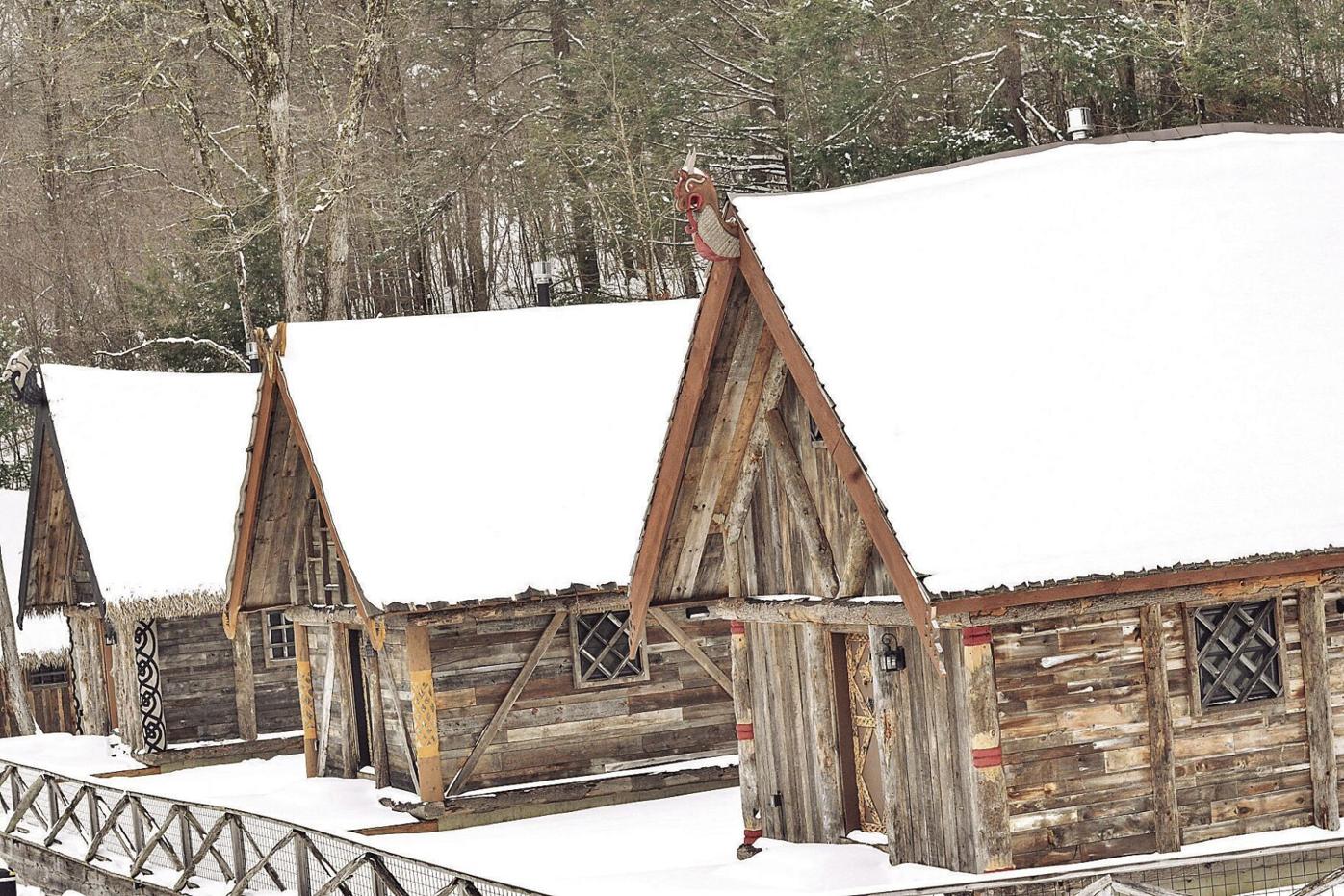 The Viking Village in Guilford. 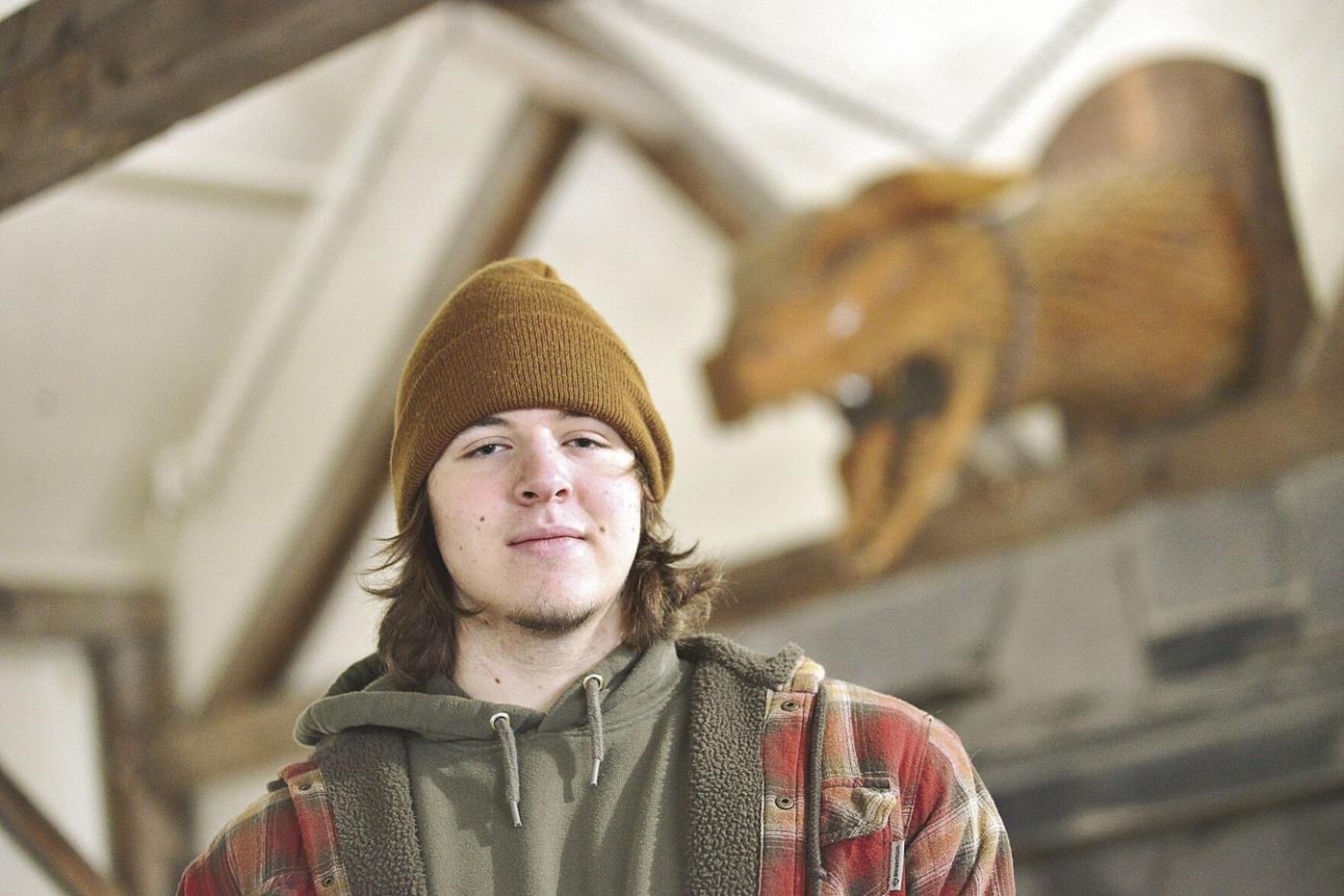 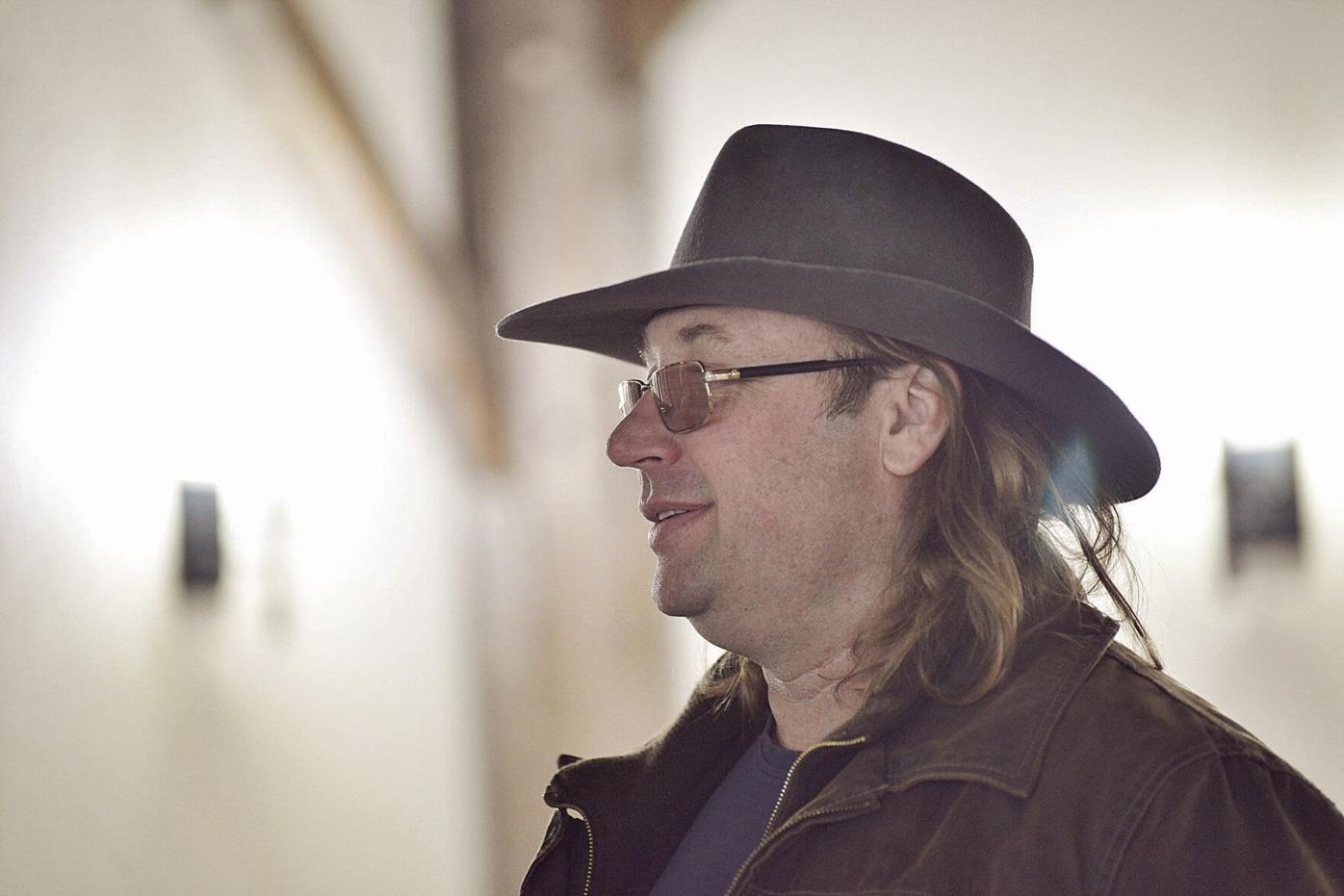 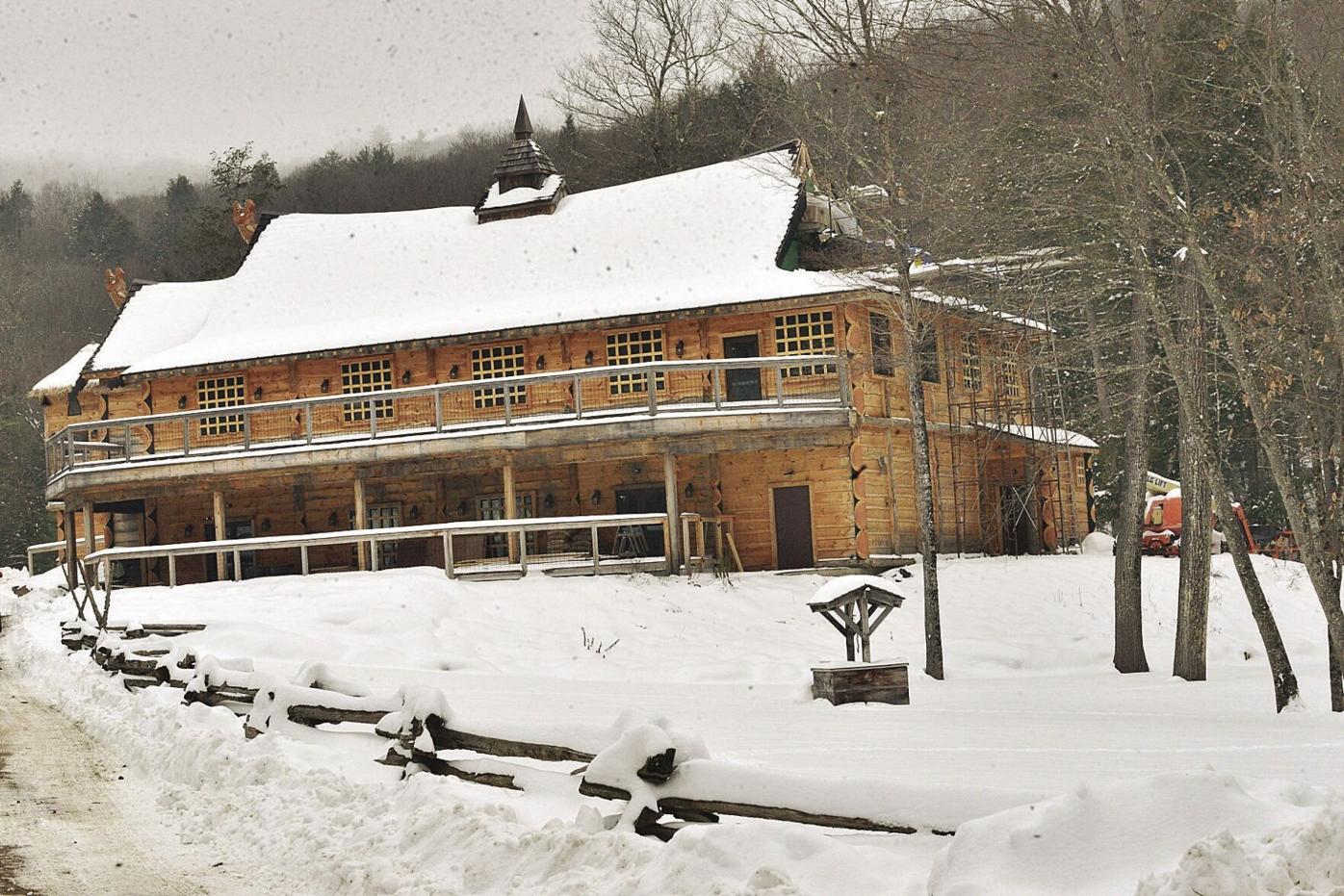 The Viking Village in Guilford

Crews work on a building on Sweet Pond Road, in Guilford.

Paul Belogour at the Viking Village in Guilford.

Randall Williams works on one of the two large fireplaces inside the main building of the Viking Village.

The Viking Village in Guilford.

The Viking Village in Guilford

GUILFORD — In 1960, Helge Ingstad, an explorer, and his wife, Anne Stine Ingstad, an archaeologist, discovered the remains of a Viking encampment in Newfoundland dating back to the year 1000. But for many years before the discovery, people have talked long through their dark winter evenings about whether the Vikings ever set foot in what we now call New England. And if they did, what might have happened to them.

A local father and son, building on their fascination with the story of the Vikings in North America, hope to re-create a Viking village in Guilford, albeit with many of the modern amenities to which we have grown accustomed.

“The Vikings about 1,000 years ago were the first Europeans to come west,” said Alexander Belogour. “We found six sets of ruined foundations and this big foundation of the lodge and now with a little bit of TLC, we will be ready for new Viking occupants.”

At the end of a dirt road off of Weatherhead Hollow Road, Alexander’s father, Paul Belogour, with the help of local contractors and craftspeople, has built Viking Village out of repurposed barn wood and local stone and wood. The village includes six cabins and a central gathering hall.

Each of the cabins features a wood stove, a kitchenette, a bathroom and a sleeping area. The lodge includes a kitchen facility, meeting rooms and a gathering hall with a towering stone fireplace.

“What you see here, short of the plywood, everything you see is locally sourced,” said Paul. “All the live edge wood you see was harvested right here.”

Alexander Belogour grew up around Old Sturbridge Village, a 19th century living history museum in Massachusetts. He and his father want to create the same sort of thing in Guilford, only with Vikings.

“About five years ago, we went to a Viking festival in northern Vermont,” said Alexander. “There were re-enactors there from Sweden and Iceland and we thought, why not make a place for them to be here?”

They have also cleared more than 17 miles of trails on the 3,000 acres adjoining their Viking settlement.

They hope to open the trails to the public for mountain biking, hiking, horseback riding and cross-country skiing. There might even be guided ATV tours and maybe even dog sledding available, said Paul Belogour.

Originally from Belarus, Belogour came to Boston in the early 1990s on a rowing scholarship to Northeastern University and never went back.

Belogour told FinanceMagnates.com in 2013 that he went straight out of college to the Bank of Boston because he was fascinated with the currency markets. According to his LinkedIn page, Belogour worked there for six years after graduating from Northeastern in 1995 with a B.S. in economics.

In 2001, in collaboration with Commerce Bank and Trust, he established his first foreign exchange firm, CBFX, which was the first FDIC insured banking entity offering retail foreign exchange to customers worldwide.

A few years after its foundation, CBFX was purchased by IFX Markets and then City Index.

But in 2008, following the Wall Street crash, Belogour and his wife, Christina, started to think about getting out of the Boston metro area. They found a farm in Bernardston, Mass., which they still own, and began scouting farther north for more opportunities.

He found the land in Guilford and over the past few years has purchased a maple bush farm, the former Black Bear Sugarworks rebranded as Viking Farms, and about 3,000 acres in town.

“Guilford is one of the greatest places on Earth,” he said. “Trust me. I’ve been everywhere.”

The Belogours also purchased another 1,400 acres in nearby Halifax and have established a website, VermontMapleSyrup.com, to market “all things Vermont.”

One of those properties is 70 Landmark Drive, which was once known as the Smyth Mansion and has housed over the years a nightclub, a community college, a dentist office and a gym. Belogour, operating as Vermont Innovation Box, hopes to open a business incubator there.

“We want to bring talent and brains from all over the world to Vermont, give them a place to start a business,” he said.

Nearby, acting as Vermont RE Development, he also purchased eight acres of Connecticut River frontage.

Just down the river, in Hinsdale, N.H., Belogour purchased Norm’s Marina for $640,000 nearly four years ago. He owns that property under Guilford Holdings. He said it’s nearly impossible to get a marina license on the Connecticut River without purchasing an already existing marina. He said his main reason for buying Norm’s Marina is because “I love rivers. It goes back to my rowing days.”

In July 2019, Belogour, again operating as Vermont RE Development, purchased a 20,000-square-foot industrial warehouse on 4.4 acres on Old Ferry Road. This purchase is connected to a small three-acre plot he bought on the corner of Sweet Pond Road Guilford, where he hopes to build a glass house.

“I spent a lot of time in Dubai,” said Paul Belogour. Working on some ideas he got while there, he hopes to bring “Something that is out of this world in terms of architecture,” he said. He hopes to use the old warehouse as a production facility to make the glass panels for his prototype house.

In January, Belogour purchased the Brattleboro Outlet Center on Canal Street. Belogour’s plan for what is now known as the Exit One Mall is a facelift, an addition to look like a barn, and maybe even a food court. Belogour said he wants to make the mall the “unofficial first tourist stop” in Vermont.

Just last month, Belogour purchased the former Country Kitchen/Mattress Center on Western Avenue. This building will serve as a tasting room and production facility for maple products and for beer produced by a brewery in Springfield, the Trout River Brewing Company, which he purchased in February and rebranded as Vermont Beer Makers.

“We were looking for a bottling plant and we came across a brewery that was going out of business,” he said. “They needed a capital injection and we needed the production plant. It was beneficial for everyone.”

And earlier this month, Belogour, acting as Vermont RE Development, recently bid $3.25 million for the campus of Southern Vermont College in Bennington, but was outbid by Southwestern Vermont Health Care, which submitted a $4.65 million bid.

Belogour said he is investing in southern Vermont because he loves the area and because he believes it has a lot of potential.

“Right now, people are leaving the cities,” he said. “Right now, your office can be anywhere. Why not Vermont?”

Belogour also said he has not found Vermont to be a difficult place to do business.

“I just don’t see it,” he said. “I don’t see any difference between starting a business in California or Boston. As a matter of fact, it’s better here, the lifestyle is better. If I was to do it over again, I’d rather be here than in Boston.”

Belogour said he also wants to give his son, Alexander, a place where he can build his own legacy.

“I love it up here,” said Alexander, who is thinking about going to college to be a lawyer. “I love the wilderness.”

Belogour also operates Belogour Properties in the United Arab Emirates, which is described on its website as “a real estate hub for Dubai based property seekers.”

Also in UAE, Belogour operates Emirates Wealth, which is described as a “gateway to retail and qualified investors in the UAE, [Gulf Cooperation Council], [Middle East Africa and South Asia] regions and to the global markets.”

“It’s one of those things,” he said. “You do certain things and then you ask yourself why you are doing it. But now they’re doing well. They are second in the league.”

He also established Boston UniSoft Technologies, where he is described as an “IT entrepreneur.”