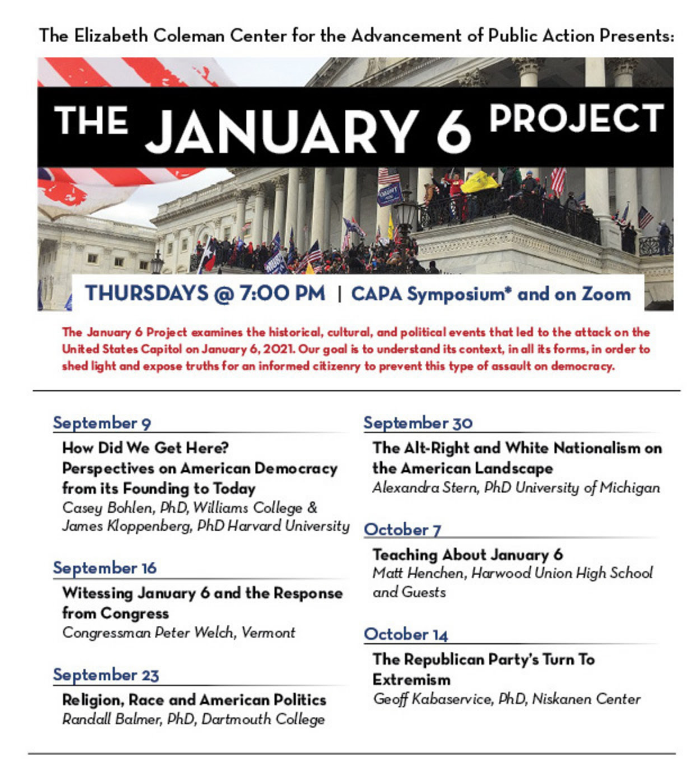 Poster for a series of six forums at Bennington College on the events of Jan. 6 at the U.S. Capitol building. U.S. Rep. Peter Welch, D-Vt., spoke Thursday about his experiences that day. 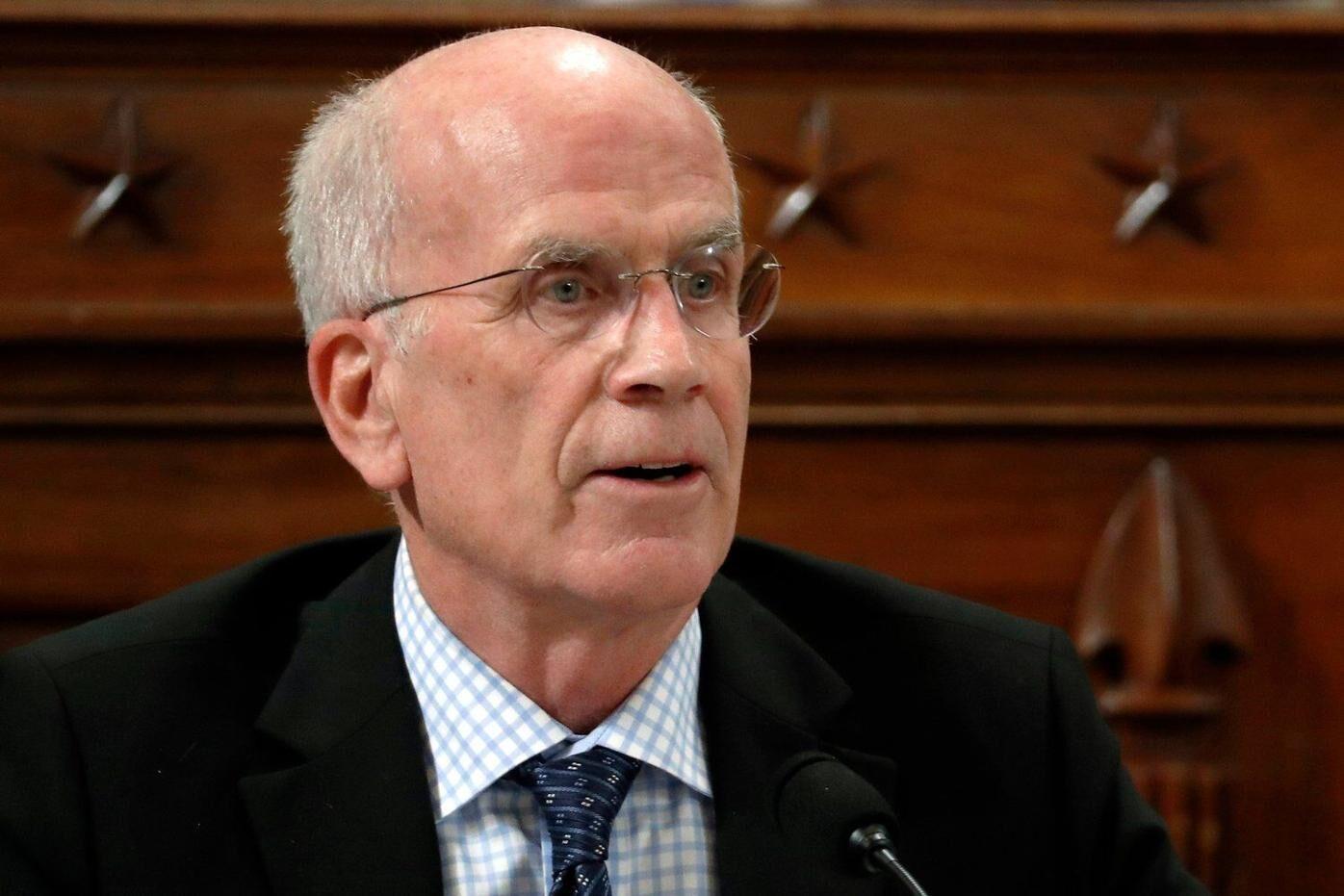 U.S. Rep. Peter Welch, D-Vt., spoke at Bennington College about his experiences during the mob attack on the Capitol on Jan. 6.

Poster for a series of six forums at Bennington College on the events of Jan. 6 at the U.S. Capitol building. U.S. Rep. Peter Welch, D-Vt., spoke Thursday about his experiences that day.

U.S. Rep. Peter Welch, D-Vt., spoke at Bennington College about his experiences during the mob attack on the Capitol on Jan. 6.

BENNINGTON — Before U.S. Rep. Peter Welch took part in certifying the election of Joe Biden as president on Jan. 6, he decided to take a long walk around the Lincoln and Washington monuments toward the Capitol building.

There were large crowds of protesters and supporters of then-President Donald Trump, he said, some carrying signs with “vile messages” and shouting and chanting with “a lot of profanity.”

The protests were echoing and amplifying Trump’s claim that he had not lost election to a second term in November, but that victory had been “stolen” from him.

Despite the protests and language, “we are used to protests in D.C.,” Welch said, adding that he was “kind of curious.”

At one location, a crowd expecting Trump to soon speak to them “was very, very riled up,” some wielding bullhorns, Welch said, and the atmosphere was tense.

“The prevailing message,” he said, was “F those people in there,” with a special focus on House Speaker Nancy Pelosi, a Democrat, and Vice President Mike Pence, who though a Republican, had decided not to oppose certifying Biden as president, provoking Trump’s ire.

Welch said he noted “extreme anger against everybody in the building” as he approached the Capitol.

Speaking Thursday at the Center for the Advancement of Public Action at Bennington College, the state’s lone member of the U.S. House participated in the second in a six-part series of forums on the events of Jan. 6.

Welch spoke on his experiences during the mob attack on the Capitol building that day and his and his colleagues’ responses to an assault on the nation’s electoral process.

Arriving for the early afternoon start of the normally uneventful certification process by members of Congress, Welch said he saw a group chanting and “marching in formation.” But he added, “I still felt 100 percent certain that everything would be fine. It didn’t occur to me that the Capitol would be breached.”

Welch said he was in the gallery of the House chambers talking with colleagues when members of Pelosi’s security detail came rushing up to her on the dais. He said he could tell from their faces that “they knew something,” which, being inside the building, he was unaware of — a mob was closing in on the Capitol steps.

Pelosi began the certification process again, he said, but soon security returned and escorted the third person in line for the presidency behind the vice president out of chambers.

“We had no idea what was going on,” Welch said, and the certification began again with another member of the House leading the process.

“Then a Capitol policeman came into the chambers and interrupted,” Welch said, and that is “something that just doesn’t happen.”

There was another attempt to begin the certification before a guard came in and said there had been a break-in at the Capitol.

At that point, members of Congress were instructed to sit down on the floor and put on gas masks that are available for the members in the event of an emergency.

Welch also observed a guard pushing closed one of the doors to the hall outside the gallery, obviously to block an intruder. Security personnel then began working out the process of guiding members of Congress to a secure location, which turned out to be a committee meeting room.

A vivid memory he has, Welch said, is of a guard standing near him with his gun in his hand, but with a look on his face that said “he didn’t want to use his gun, but would if he had to.”

Soon after, there was a shot fired and a struggle, during which protesters tried to break down doors leading to the floor of the House.

Members of Congress and guards barricaded the double-doors, Welch said, adding, “They [the protesters] came within an eyelash of getting onto the House floor.”

The tense situation “continued for some time, and in all candor, I was a bit scared at that point,” Welch said.

Some began to think there might be a mass shooting, he said.

After the building was cleared by police, lawmakers returned to chambers to certify the election of Biden and Vice President Kamala Harris.

Welch said it was shocking to observe the damage to the Capitol and its furnishings, and to talk to Capitol police officers about the mob assault.

Besides those that suffered injuries defending the Capitol, some of the officers, especially those who were African Americans, also endured “vile, vile epithets,” he said.

He said he’s learned since that day that “there was a lot of trauma for a lot of people.”

Welch said he is proud lawmakers came back “and did our job,” a process that lasted into the early morning.

Still, he feels “a lot of sadness” that 139 Republicans voted against certifying Biden’s well-documented victory rather than follow the democratic tradition of accepting the results of an election.

Of those people, some of whom he has known for his 15 years in Congress, Welch said he found their actions difficult to accept as they played into or ignored Trump’s baseless allegations that the election was stolen.

A few courageous Republicans voted in favor of certification, he said, and many “were cowardly” in voting against Biden’s certification even though they knew he had won, fearing a backlash during the next primary from Trump supporters.

Others could only be described as “crazy” true believers, he said, such as QAnon conspiracy promoter Rep. Marjorie Taylor Greene of Georgia.

That third segment of the Republican Party seems to be growing, Welch said, as are attempts on the state level to restrict access to voting and to take vote certification out of the hands of election officials and give it to Republican-controlled state legislatures.

“This hasn’t stopped, the lie Trump began,” he said.

“We were lucky this time,” he said, in that some election officials, particularly in the key state of Georgia, resisted pressure to help Trump overcome a clear deficit.

Dealing with the nation’s current divisiveness “is something that is going to take all of us” to address, he said. “How did we get here?”

Blunting the negative effects of lies and attacks spread over social media is one place to start, he said, if that can be accomplished while preserving freedom of speech rights.

National voting rights legislation also is needed, he said, to ensure fair and uniform requirements and access are maintained in all 50 states.

These and many other challenges are daunting, he said, but Welch said he gets “pretty excited about the participation by young people,” and “inspired by the energy” they bring to issues like climate change.

Referring to his early years involved in civil rights causes, Welch said he found participation with people who believe in like ideals is rewarding no matter how slow the progress or difficult the struggle.

The CAPA series on the events of Jan. 6 will continue Thursday with a forum on “Race, Religion, and American Politics.”