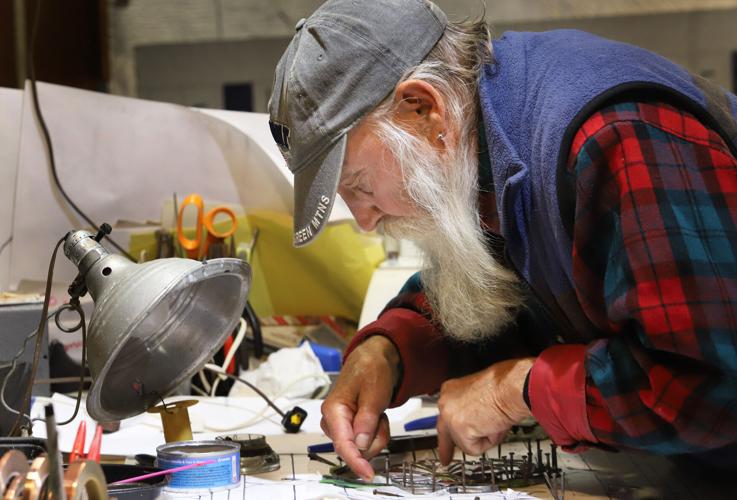 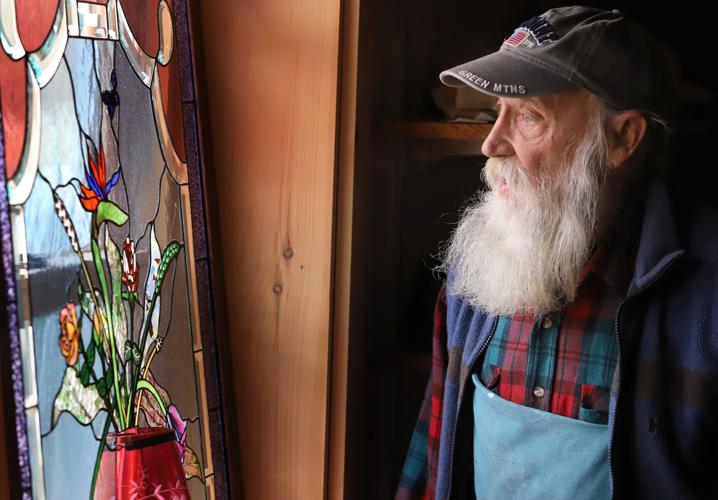 Johnny Hinrichs next to one of his custom stained glass pieces at his Sunderland studio.

Johnny Hinrichs next to one of his custom stained glass pieces at his Sunderland studio.

Johnny Hinrichs always knew he was a dancer. Through life’s heartaches, far-flung relocations, career changes and family commitments, he’s always maintained his love of letting things go and living in the moment.

For him, that means creating beautiful stained-glass and, even at 74, dancing the night away. Johnny talks with Vermont Voices about his concerns for the environment, dyslexia, lost loves, making the perfect meatless hamburger, and how dancing changed his life. Hinrichs has a stained-glass studio on Route 7A in Sunderland.

“I’ve been working with glass since 1974. I saw someone making a terrarium with silicone bathroom caulk, glass and ozone when I lived in California. It was a self-supporting structure, and I was hooked. I went back to Wisconsin after eight months in California, and the California friends I made came out to Wisconsin, so we started a little terrarium business. There were five friends working in this double-wide, cranking them out.

“My father was an Oldsmobile dealer. I was raised to be a car guy. I went to years of college, then automotive school. I realized that I wanted nothing to do with cars. I foresaw what was happening right now, planet-wise. I knew we were in trouble. I knew the dangers of fossil fuels. It was never really publicized. Nobody believed it back then. But when I thought about it, I realized that’s what’s going to happen. We’re going to have some major problems. Back then, you know, the icebergs weren’t even noticeably melting back in the ‘60s, but there was a theory that they would melt. And I mean, it seems so sensible to me. So, I became a flagrant anti-establishment hippie.

“I lived in a commune for a while. Yeah, it was fabulous, deep in the woods in northern Wisconsin. We had seven family members. But on weekends there would be more than 20. People from Milwaukee, from Madison, just hang out in the woods. I learned to garden. I learned to freeze, I learned how to cut, how to make firewood, how to haul firewood out of the woods, and how to live simply, working the land. Truth is, the commune got incestuous, started switching partners. That caused a major problem, so I left to go to California to pick grapes for a while, but I came back.

“One day in a terrarium studio, I heard a story hour on Wisconsin Public Radio about dyslexia. I’d never heard the word before, but when it was finished, I knew. That’s me. That explains it. I was almost in tears. It was a very emotional moment in my life because I finally knew.

“I’m dyslexic. Leonardo da Vinci, Einstein, Alexander Graham Bell, all these brilliant people I’ve read about, were all suspected dyslexics. By the end of the program, I realized that, you know, the poor performance in school, always acting out in school. I was always up at the desk next to the teacher or out in the hallway. I remember that didn’t bother me for some reason. I never felt belittled. But it was a real turning point for me because I realized I had something. I labeled myself as dyslexic, but I also labeled myself as not disabled. I am extra abled because it gave me certain powers that most people don’t have. Like, I can think in 3D, I draw in 3D. I can see an image, I never forget it. Put a word in front of me, a number in front of me, I forget in six seconds. I can’t remember a sentence or a phone number if you paid me, but show me a picture. That picture they painted on the radio that day was me, forever.

“My father died in ‘85. And my sister couldn’t handle my mother. She was drinking a lot. She was hanging out all day long in her house, and she was becoming a pain in the ass. So, my sister’s, you know, not begging, but asked me to move here to Vermont. So, I came here to live with my mom. Mom was alone for the first time in her entire life, living on the far end of a dead-end road with no neighbors in the wintertime, so she drank herself into oblivion every night. I lived with her there for the next 20 years.

“The love of my life went back to her old boyfriend. I was crushed. She was a special woman. I had known her for a couple of years before we became a couple. She and her boyfriend broke up, so she was free. She was adventuresome in all the ways I was, and she was very humble. She started a shelter and a counseling group for abused women.

“She left on my birthday. I was heartbroken. It’s hard to say out loud, but I was brooding for about a year and a half after that. She just upset the hell out of me. I just couldn’t quite kick her. And then I went back to Wisconsin. It was a Saturday morning. I went to the farmers market and she was there with her newborn baby. And we said a few words. Then she put her newborn baby on her breast. And I just walked away. God, It all came back right then. I hadn’t gotten rid of it yet at all, the longing to see her, that beautiful baby, I couldn’t take it.

“That night, I had a mini-stroke, a TIA. As soon as I had walked away, my heart was beating so fast, jumping out of my chest. And then it would slow. I sat down with my head between my legs on a bench. I felt it two or three times, boom, boom, boom, boom, boom, boom, boom, boom. When I crawled into their house, one side of my face was all collapsed. I obviously had a stroke or something. They took me to the hospital. It was a transient ischemic attack. It’s like a stroke, except it was thick blood, not a blood clot. Generally, it clears up in 10 to 24 hours. I spent the night in the hospital. I don’t remember any of that, but in the morning, I could write my name again.

“At some point shortly afterward, I sat down with myself, and I said, ‘You gotta forgive the woman. You could have died or been disabled. You have to forget her, free my heart.’ So, for the first time, I let her go.

“The most enjoyable 10 seconds of each commission is when they walk in here, and they see what I made, and they’re like, ‘Oh my god!’ It’s everything because I’m creating something that they love. And I think the one fact I’m most proud of in my stained-glass career is I’ve never ever had a piece I made refused. Often, they don’t even know what they’re getting. This one person said ‘I just wanted abstract.’ I made a really crazy abstract, and they loved it. Right after that, I did the Orvis fish for their window. I’m proud of that, too.

“I want to pursue my walnut burger business. I make a fabulous vegetarian walnut burger. I had my first veggie burger in 1970, soy burger. After that, I’d try one occasionally, this one, that one. Friends would make them for me. Some of them were okay, but none of them were good. Mine is not grain-based. It’s not vegetable-based. I put eggs in it, so it’s not vegan. I’m not going to succumb to the vegans. They’re a bit strong for me. (laughter) Everybody who has this burger told me it was the best burger they ever had. I want to get a food truck and go to rock ’n’ roll festivals.

“Saturday, I went down to Bennington and danced three hours to Julie Shay. I don’t know what to tell somebody who doesn’t dance. They just got to get over their self-consciousness. That’s all it is. They don’t want to look like a fool out there. I never want to be a fool. I am the last person to make a fool of myself. Except on the dance floor.

“I also listen to rockabilly in the studio. I take a break from the glass and just dance for a few minutes. I often do. I put on Brian Setzer’s ‘Dirty Boogie’ album. For the first three songs, I’m warmed up and ready to go. I’m a pretty active dancer. I mean, it used to be dangerous, but I keep my eyes open when I’m with people now.

When I was 6 years old, my sister brought ‘Rock Around the Clock,’ Bill Haley, into the house. I played it over and over and over again. I danced all around our chimney. And then it was in grade school Mom taught me to chop-chop. So, we’d go out for dinner, and there’s music afterward. I’d go with Mom. People said, ‘Oh, isn’t Johnny cute? He can dance.’ I was born to dance.

“Well, what can I say about the future? Two words: we’re screwed. The planet is going to cast us off in the next five decades, and we’re not going to believe it. We don’t believe it now. We’re not going to believe it until it all disappears. We are the stupidest nation. We have more money than any other nation, and all of us sit around on our asses without trying to change. I mean, the sea is rising, the glaciers are melting, everything is flooding, droughts, all the places are drowning.

“There’s something we could do, but we’re not going to do it. Yeah, we could. We could cut our driving down by 50 percent. We could all not buy anything plastic. Don’t buy anything that you can’t reuse. I mean, there’s a lot we could do — buy one car for a family to share, carpool. You have a family with two kids. They got four cars. It doesn’t make sense.

“We’re political turmoil right now. But sensibility will reign again one day in the end. It might be a couple of years, a couple of elections, before it gets straightened out. But, I mean, if Trump gets elected, he’s going to drive us even further into the environmental hole. And if that happens, after four more years of that, I think people will start to wake up, finally. We had to wake up 30 years ago.

“I have no hope for the planet. That’s why I never had any kids. I was not going to bring a kid into the world that was going to have to fight for his breath.

“The only hope I have is to try to be in the moment because the future is unknown. The past you can’t change. I mean, everybody’s heard this before, but not many people live it. And since I can’t do anything about the future, I’m not going to worry about it because I’m not going to be here. So, I just dance. I dance my tears away. You’re in the now, listening to the rhythm, moving your body. Maybe I’ll try a new move, you know, try a spin. Maybe it will even be pretty good.”

Vermont Voices is an ongoing column about the people of Southern Vermont and the region in their own voices.