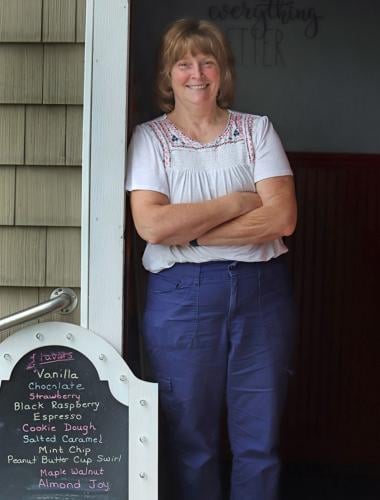 Diane Phippen, owner of Scoops by the Dozen ice cream shop just outside the Bennington border in Hoosick, N.Y. 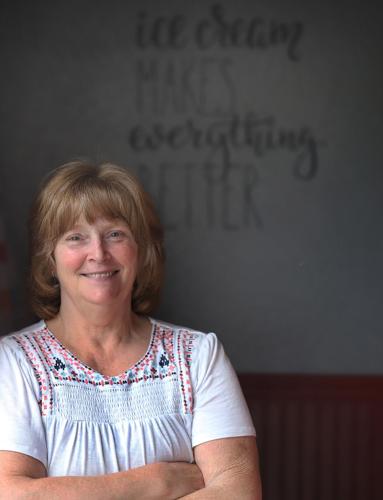 Diane Phippen, owner of Scoops by the Dozen, at her shop in Hoosick, N.Y. 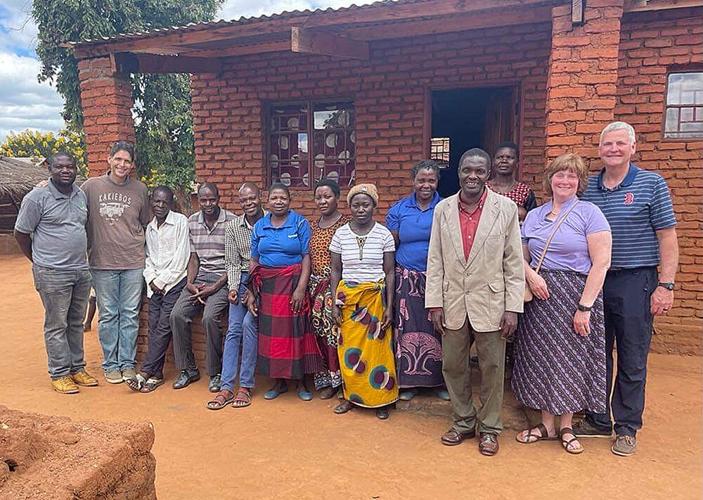 Diane Phippen and her husband, Chuck, outside the schoolhouse in a refugee camp in Malawi, Africa.

Diane Phippen, owner of Scoops by the Dozen ice cream shop just outside the Bennington border in Hoosick, N.Y.

Diane Phippen, owner of Scoops by the Dozen, at her shop in Hoosick, N.Y.

Diane Phippen and her husband, Chuck, outside the schoolhouse in a refugee camp in Malawi, Africa.

Although not technically a Vermonter, Diane Phippen, owner of Scoops by the Dozen, a homemade ice cream shop in Hoosick, N.Y., just over the Vermont boarder by Bennington, wanted to share her story with us about the power of change, resilience, faith, and the human spirit moving forward to serve others. She lives on a 200-acre dairy farm on the Bennington border, where she raised a dozen kids, giving her ice cream place its unique name. However, the story — or her voice — doesn’t end there. Not by a long shot.

“I grew up in Connecticut, and when I was 13, we moved to a suburb of Hartford called Weathersfield, Conn. I met my husband when we were both young, and we got married. My husband was an engineer, working long hours at Pratt & Whitney Aerospace, and as we began having kids, my husband started feeling left out of the fun we were having at home, so he volunteered at a farm, milking cows and using the tractor. One day, he announced to everyone that he wanted to be a farmer. My reaction at the time was, ‘I don’t think you can do that unless you are Amish or have a family that farms.’

I was a suburban girl. We both had zero farm history, and we definitely weren’t Amish, but we found ourselves looking at farms throughout Vermont and New York. At some point, we found ourselves at a farm auction outside Cooperstown, New York, with my husband bidding on an old dairy farm with his bucket of money as the rest of us played at McDonald’s, eating nuggets and hamburgers. That’s the day we became a farm family. The first thing I asked him was, ‘Now what do we do?’ (laughter)

“That first year on the farm was both exciting and tough. Owning a farm, you just have no idea what our expenses would be. That was a shock coming from having an engineer as a husband and living the suburban lifestyle in Connecticut. Nobody ever opens their farm books and says, ‘Oh, this is what it looks like.’ We often prayed for God to help provide for us, and he’s always come through, but there was never a lot extra at the end of the month. I have memories of that first year, some nice, like some of the farm families coming to help us through those first few seasons, but there were a lot of people sitting on the sidelines waiting for the city people to fail. I remember the farmer that sold us that first herd of cows telling us never to have more cows than our wife can milk herself. That was funny at the time, but we’ve realized how true that was over the years. Some neighbors came right up to the barn that the first day to watch us milk the cows. I’d never milked a cow before, and I remember thinking, ‘Isn’t it so nice that they came to help?’ I realized very quickly that they were coming to watch the show. I was shaking with all these people watching me. That was very humbling.

“My husband asked me if I could just milk the cows for a while until the kids got a little older. I’ve now been milking cows for over 30 years. (more laughter)

“At one point, we ran a bed and breakfast on the farm. My son, Scott, around 7 years old, was in charge of feeding and caring for all the calves. That was his job. He would always befriend these guests at the bed and breakfast upon their arrival, then proceed to teach them how to do all of his jobs, bottle feeding and looking after them. They all loved it and often told us how kind he was in letting them help with the calves while they were there. Then, he would sit back with his hands behind his head, watching, smiling, loving every minute, getting the guests to do all his chores.

“I’ve raised and home-schooled all 12 of our kids. They range right now from 35 to 10, with currently 16 grandchildren. They’re spread out all over. We only have two kids left on our farm here outside Bennington, a bigger place for the needs of the business. None of them ever wanted to be farmers.

“The idea of the ice cream shop came from a Hallmark Christmas movie I saw. A couple was trying to open a restaurant and decided to open a pop-up place. Something clicked in me. Lo and behold, we looked into opening that sort of place, but we couldn’t find the right place until this building came up for auction. I then headed to Scoops ice cream school in St. Louis, and here we are, a dozen kids, Scoops by the Dozen.

“Our faith has always sustained us, allowed us to do the things that are important to us; love God and serve people. Last year, I went to Malawi, Africa, for 10 days, working with my husband and our three youngest kids at a remote refugee camp on the border with Sudan. One of our older kids lives close to the camp, and we had the opportunity to see and feel what went on there, meet the people, and understand the situation there. We recently put Scoops by the Dozen, the building, and the whole business, including our 200-plus acre dairy farm, up for sale. We are leaving soon to spend the next four years working directly with the 80,000 refugees, mostly war refugees from Somalia, now living in the camp. We will be working, mentoring, and training them with hands-on vocational training, both in the actual camp and in several villages nearby.

“We met a young man at the camp who, with his brothers, literally walked to the camp from Somalia, meeting other refugees along the way, with nothing but what they carried, after his village was destroyed and his father was killed. There are hundreds of those stories. Most times, they don’t even know where, or even if there’s a place for them after walking for weeks, maybe even months.

“Many of the refugees dream about making it to South Africa, a dream that many refugees share, that if they can make it somehow to South Africa, they will be re-settled in their homeland. Less than 1 percent in the Malawi refugee camp are ever resettled. Along the way, there’s no jobs, no opportunities, and monies are now being cut by the government, so those people walking toward the camp might not be allowed in.

“We spent some time at the camp’s tiny, brick school building. Fifty students, sitting right on top of each other, shoulder to shoulder on this bench, with no pencils, books, or even paper, just a chalkboard and chalk. In this hard place, these kids were smiling and laughing, trying to do their best with what they had. I remember asking the students, ‘What country do you live in now?’ They all looked around at each other, then one of the kids said, ‘The Dominican Republic of Congo.” Another kid said, ‘Somalia,’ then, ‘Burundi.’ Then they all started telling me the countries they’d come from, not where they were right there. I asked later about what the kids had done in the classroom. One of the people working there told me how important it was for the parents to instill where these children came from because, in their minds, they think they’re going back. They want to do everything they can to prepare themselves for that day when they might go back to their taken-over, or destroyed countries. Even though for most of those people, that will never happen, there’s still hope.

“I think it’s time. It’s like when you’re an engineer’s wife, and then you become a farmer’s wife. How do you ever know if any of this is going to work out? Well, you can trust God that if it’s what you’re supposed to do, then you’ll get through, with his help, no matter how hard it is.

“When you’re not just waiting for that day that you can retire, that brings light into your life. Maybe retirement can look like something different. You don’t just have to be done. As you get older, God still has things for you to do to help. This is our next chapter.”

Vermont Voices is an ongoing column about the people of Southern Vermont and the region in their own voices.