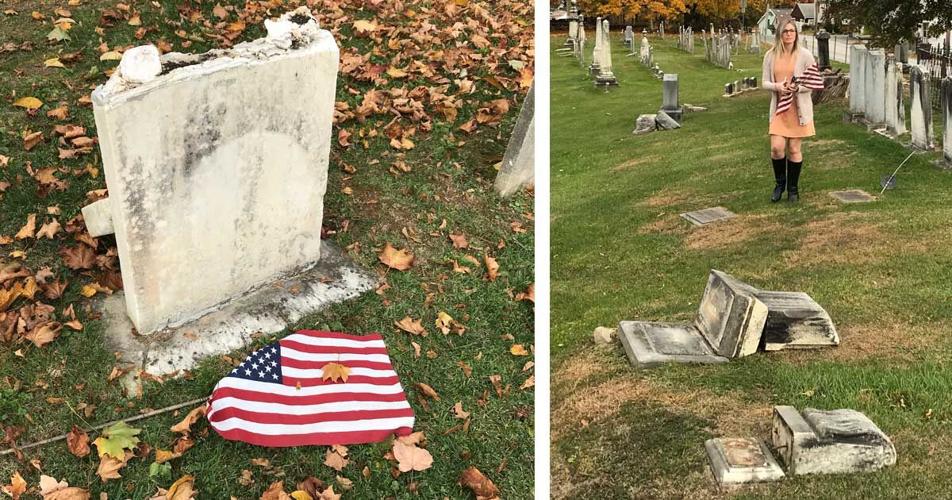 More than 200 gravestones were damaged at the Village Cemetery on Morgan Street. At right, Assistant Town Clerk Kayla Thompson gathers flags cast down by vandals. 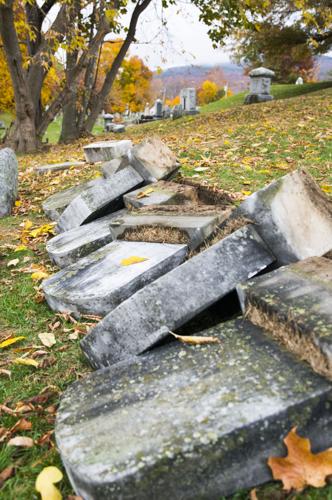 More than 200 gravestones were damaged by vandals at the Village Cemetery on Morgan St.

More than 200 gravestones were damaged at the Village Cemetery on Morgan Street. At right, Assistant Town Clerk Kayla Thompson gathers flags cast down by vandals.

More than 200 gravestones were damaged by vandals at the Village Cemetery on Morgan St.

BENNINGTON — One or more vandals hit the historic Village Cemetery on Morgan Street over the weekend, flipping or damaging over 200 gravestones, some dating back to the 1700s, police and town officials said Monday.

“Words can hardly describe the upset and sadness felt by town staff and police at the discovery of extensive vandalism at the Village Cemetery on Morgan Street over this past weekend,” the Bennington Police Department said on its Facebook page in announcing the vandalism and asking for the public’s help in identifying the perpetrators.

“Over 200 gravestones have been overturned, and many seriously damaged, including stones from some of the oldest graves that have stood for hundreds of years,” the post continued.

Jonah Spivak, the town’s communications coordinator, said Monday that the stones were pushed over, while others were broken, throughout the property.

“We will be going and inventorying all of the broken stones in the next week or so,” he said.

Spivak said Tom Giffin of the nonprofit Vermont Old Cemetery Association has reached out to offer the group’s help in repairing the damage. He said Giffin told him, “‘You can’t let them win. When they knock ‘em down, we’re going to put them up.’ I appreciated that sentiment.”

Contacted Monday, Giffin said he planned to come in May to focus on repairing the serious damage. He said it appeared many of the stones had been turned over, and putting them upright and in place might not require a great deal of extra work. But damaged stones would be tougher to repair.

“Some of the damage looked bad,” said Giffin, of Rutland. His organization helps with cemetery upkeep and repair all over the state. He said in one case in Central Vermont, the group repaired extensive vandalism, only to have vandals hit the cemetery again — and again they repaired the damage.

“We try to repair what we can and do the best job we can,” he said. The key to the success is community volunteers. Giffin said community members will be asked to help restore the old cemetery; Spivak told him Bennington would likely have plenty of volunteers willing to donate their time and energy on behalf of the historic site.

Giffin said the only bright side — if you can call it that — of the terrible damage is heightened community awareness and appreciation for their old cemeteries.

“Once a community takes an interest, you see these things go away,” he said, explaining how vandalism subsides as people become aware of the importance of their historic cemeteries.

Police Officer Rob Murawksi, Bennington director of public works R.J. Joly and assistant town clerk Kayla Thompson surveyed the damage, according to the Facebook post, and all asked, “Why would someone do this?”

The town has been investing $10,000 annually toward update and improvements of the cemetery. Joly said in the Facebook post, “It was looking really good. Now, it’s the worst we’ve ever seen.”

{span}Bennington resident Nancy White, appearing at the regularly scheduled Select Board meeting Monday night, asked the board to impose a $500 fine on anyone found at the cemetery after dark. The Board said it would consider the suggestion. {/span}

Police are asking for the public’s help in identifying the vandals. “Do you have a game camera or a security camera with a view of the cemetery? We’d appreciate hearing from you,” police said in the Facebook post.

Witnesses or residents with footage can contact the Bennington Police Department at 802-442-1030.