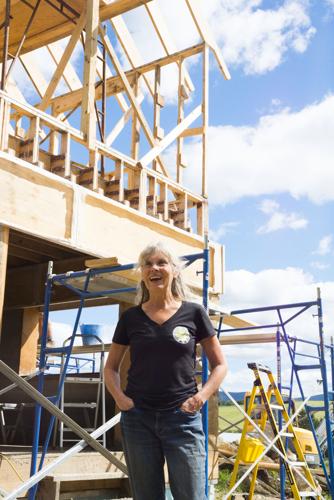 Susan Beal and her husband are building an eco-friendly residence on their property off Monument Avenue in Bennington, using a unique product - hempcrete. 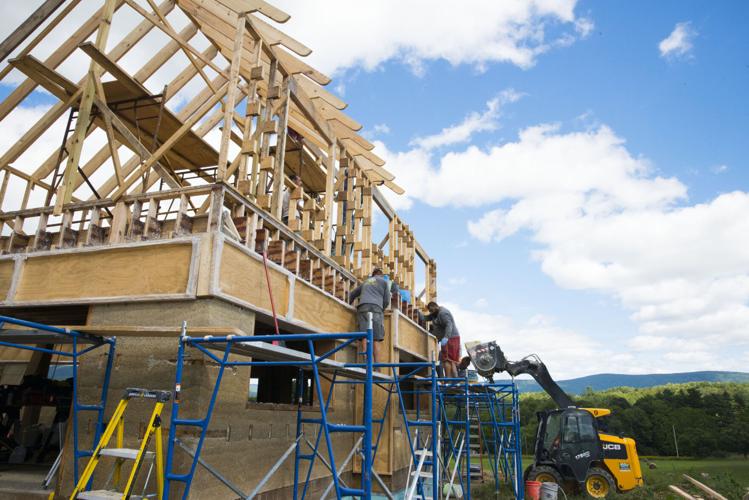 The new house will have foot-thick hempcrete walls, and eco-friendly and recycled features on the interior and exterior. Hempcrete is made from hemp herd — or small pieces from the core of the hemp stalk — a lime-based binder and water.

Susan Beal and her husband are building an eco-friendly residence on their property off Monument Avenue in Bennington, using a unique product - hempcrete.

The new house will have foot-thick hempcrete walls, and eco-friendly and recycled features on the interior and exterior. Hempcrete is made from hemp herd — or small pieces from the core of the hemp stalk — a lime-based binder and water.

BENNINGTON — Susan Beal and her husband, David Pearson, wanted to build a smaller, greener retirement home on their scenic former dairy farm property off Monument Avenue; that’s how they learned about HempStone.

Today, the Northampton, Mass.-based company is working with their home contractor to create a unique, eco-friendly residence atop a hill with spectacular views of the Green Mountain ridge to the east and the Bennington Monument and the Taconic Range to the west.

Beal said she’s thought about various green construction materials and methods over the years in planning a house, which finally is under construction.

“I grew up here,” she said during a tour of the site. “This property has been in my family since 1899. I left the area, came back, and I’ve always, since I was in my 20s, wanted to build a smaller house on the property.”

The general contractors are Brett and Ken Reed, of Eagle Bridge, N.Y., with the foot-thick hempcrete walls being installed under the supervision of Tom Rossmassler of HempStone.

HempStone provides expertise, lessons and materials to create what is known as “hempcrete,” a biocomposite of hemp herd — or small pieces from the core of the hemp stalk — a lime-based binder and water.

Beal said her father had built a passive solar house elsewhere on the 275-acre property, “and that was kind of a model.”

She’s also been interested in building with earth materials, such as adobe, but most don’t work well in Vermont’s harsh climate.

FEW IN THE US

“Then I heard about this, and it seemed perfect,” she said. “It’s carbon-sequestering, breathable, fireproof, and rodent and insect proof, and has an insulating R value of 2 per inch.”

She added, “We heard about hempcrete maybe five or six years ago; there was a book I read about it. ... There were so many reasons that we were interested in doing that, and it did seem like the natural complement to a passive solar house, but we didn’t find anyone who was actually doing it.”

That changed when they learned of and visited a home built by contractor Shelby Howland of Goshen, Mass., with help from HempStone.

Rossmassler said Howland’s home was the first of its type in Massachusetts.

“You could say there are about a hundred hempcrete buildings in the United States, but there are only probably 40, I would say, real hempcrete houses; the rest are sort of garages and studios and things like that,” Rossmassler said. “And this is probably the sixth hempcrete building in New England. There are three or four more going up this summer.”

Outside the U.S., however, the material is widely used in buildings, he said, especially in Europe. In large part, that has to do with the availability of quality hemp, which has long been restricted in the U.S. because it is associated with marijuana, even though it has only a trace amount of THC (tetrahydrocannabinol) compared to marijuana.

Though restrictions are being lifted, the hemp industry here remains small, and the quality is lower than that of European growers. Rossmassler said HempStone works with hemp herd suppliers in Europe and Canada.

“Hemp was illegal to cultivate in the U.S. until 2018, and consequently, the industry is in a very nascent stage,” according to the HempStone website. “However, we think that in the next [two to four] years, there will be a sufficient domestic supply chain and hope to support farmers, processing facilities, builders and all other involved in the hemp world along the way.”

Hempcrete can be applied a couple of different ways, Rossmassler said. “It’s cast, like we are doing here, with form work, or it can be sprayed into the building.”

He noted that hempcrete makes up all of the wall — in place of several layers of materials as in typical construction, including insulation, vapor barriers and interior wallboard.

He added that hempcrete absorbs and releases moisture, which can stabilize humidity inside the building as well, providing a measure of comfort.

Hempcrete in the Bennington house is primarily being mixed on-site and is being pressed or tamped into the supportive framing, which allows for a foot-thick wall.

“It’s definitely interesting. It’s different,” said Brett Reed, who with his brother took a course from HempStone on the use of hempcrete before starting work on the house.

He added that framing to accommodate the hempcrete walls involves “a lot more work than a regular house.”

Laborwise, he said, the amount is about double for a hempcrete house.

Reed said he expects to finish the house around April.

“David and I are going to downsize here,” Beal said, pointing to the house under construction, “and then Ethan [her son] is going to take over the main farmhouse.”

In addition to the eco-friendly material used in the walls, the shingles, from Euroshield of Canada, are made from recycled rubber auto tires, and the couple is using interior doors, flooring other materials from companies that salvage from mansions and similar sources.

They also found kitchen cabinets that way, she said, “and a vintage fridge — ‘cause they last forever.”

Beal said she placed a notice on social media hoping to find other people interested in green building methods of all types.

“I just wanted to get people together to share ideas, resources, maybe put together a tour at some point,” she said.

Beal can be reached at sbeal@shadowbrookfarm.org