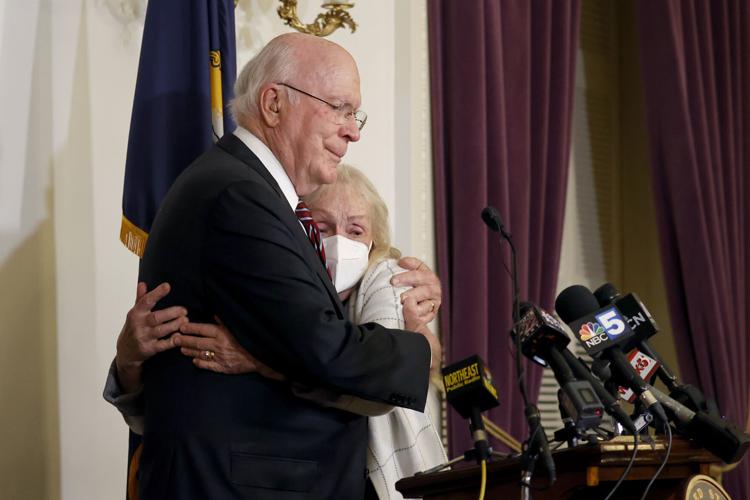 Sen. Patrick Leahy, D-Vt., hugs his wife Marcelle at the conclusion of a news conference at the Vermont State House on Nov. 15, 2021. 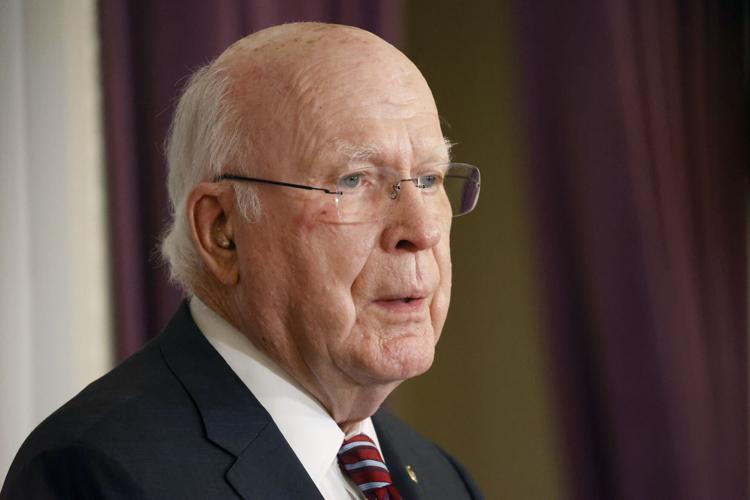 Sen. Patrick Leahy, D-Vt., speaks during a news conference at the Vermont State House to announce he will not seek re-election, Monday, Nov. 15, 2021, in Montpelier, V.T. (AP Photo/Mary Schwalm) 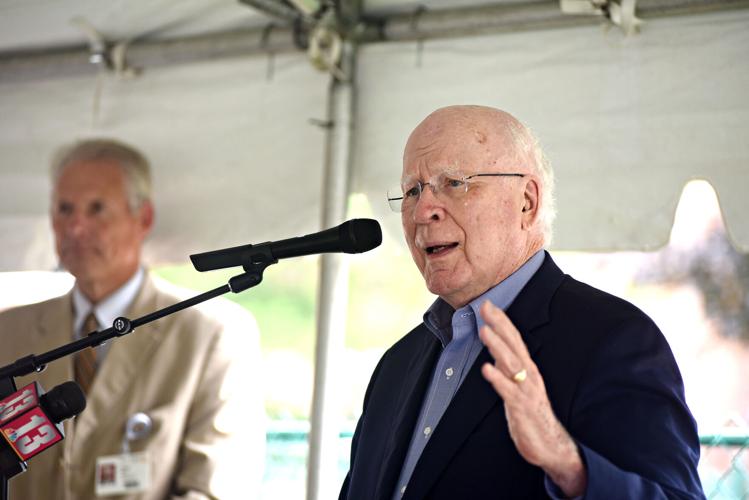 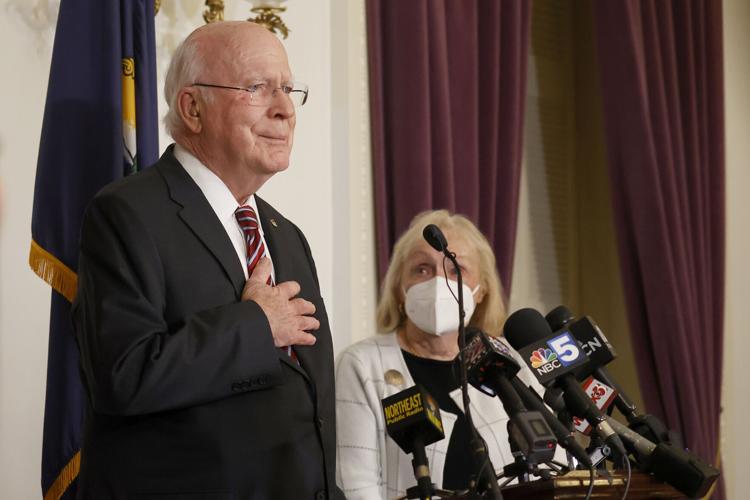 Sen. Patrick Leahy, D-Vt., acknowledges applause as his wife Marcelle Pomerleau looks on at the conclusion of a news conference at the Vermont State House to announce he will not seek re-election, Monday, Nov. 15, 2021, in Montpelier, V.T. (AP Photo/Mary Schwalm) 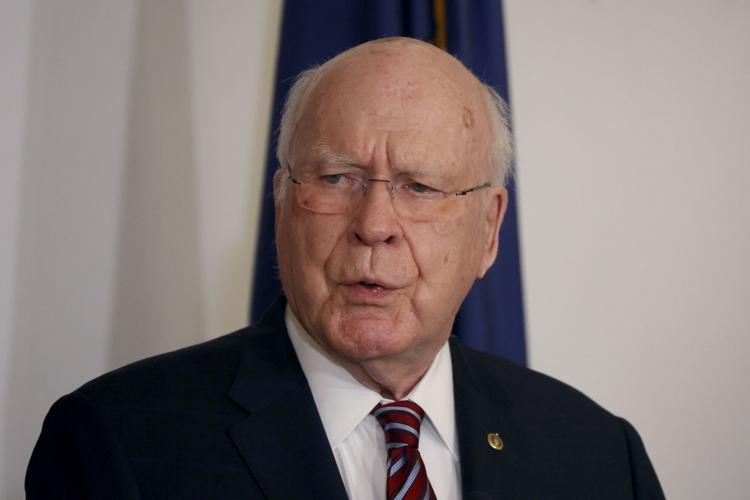 Sen. Patrick Leahy, D-Vt., hugs his wife Marcelle at the conclusion of a news conference at the Vermont State House on Nov. 15, 2021.

Sen. Patrick Leahy, D-Vt., speaks during a news conference at the Vermont State House to announce he will not seek re-election, Monday, Nov. 15, 2021, in Montpelier, V.T. (AP Photo/Mary Schwalm)

Sen. Patrick Leahy, D-Vt., acknowledges applause as his wife Marcelle Pomerleau looks on at the conclusion of a news conference at the Vermont State House to announce he will not seek re-election, Monday, Nov. 15, 2021, in Montpelier, V.T. (AP Photo/Mary Schwalm)

MONTPELIER — After nearly a half-century in the U.S. Senate, Sen. Patrick Leahy will not seek a ninth six-year term in 2022, he said Monday.

“Marcelle and I have reached a conclusion,” he said of the decision made with his wife. “It is time to pass the torch to the next Vermonter who will carry on this work for our great state. It’s time to come home.”

Leahy said he would serve out the remainder of his term, his eighth in the Senate.

He made the announcement at a news conference at the Vermont Statehouse, in Room 11 — the room where he first announced his candidacy for the Senate as a 33-year-old candidate in 1974. He would go on to become the state’s youngest senator-elect, its first Democratic senator and its longest-serving senator.

While Leahy planned to tell his colleagues of his decision in person later Monday, “I wanted to announce that, here at home just a few yards from where I grew up,” Leahy said.

“I am proud to be longest-serving senator, because I know my time in the Senate has made a difference for Vermont and beyond,” he said. “I brought Vermont’s voice to the United States Senate, Vermont values around the world.”

Leahy, 81, is president pro tempore of the U.S. Senate and chairman of the Senate Appropriations Committee. But Leahy and his wife have both faced health issues in the recent past. Leahy was briefly hospitalized in January for what he said were muscle spasms, and Marcelle Leahy began outpatient treatment for adult leukemia in May.

He made the announcement before returning to Washington for consideration of the Build Back Better bill.

“I know I speak for all Vermonters in expressing the deep gratitude we feel for the extraordinary role that Pat Leahy has played in representing Vermont in the U.S. Senate for the last 46 years,” U.S. Sen. Bernie Sanders, I-Vt., said of his fellow Vermonter. “He has been a towering figure as chairman of the Agriculture Committee, the Judiciary Committee and the Appropriations Committee. He leaves a unique legacy that will be impossible to match. Jane and I wish he and Marcelle a wonderful and well-earned retirement.”

The announcement will likely send ripples throughout politics in Vermont and will be watched closely in Washington, where Leahy’s seniority makes him the Senate’s president pro tempore and third in the succession line to President Joe Biden.

The race will also have national repercussions, as political control of the U.S. Senate hangs in the balance.

Vermont’s Republican governor, Phil Scott, thanked Leahy for his nearly five decades of service in the U.S. Senate and for his career of service to the state.

“[Leahy] has been an incredible champion for Vermonters, and his leadership and experience has ensured our state is well-represented in Congress,” Scott said. “It is thanks to him, and the funding he’s secured for our state, that Vermont is in a position to come out of this pandemic stronger than before and tackle big challenges from broadband and infrastructure to the opioid crisis. We are indebted to him.”

“On a personal note, I greatly appreciate the senator’s friendship and his willingness to work with me and my team over the last five years,” Scott said, adding that he wished Leahy and his wife a bright future and “enjoyment throughout a well-deserved retirement.”

Leahy prefaced the announcement with a recollection of his achievements in the Senate: Opposing reauthorization of military force in Vietnam, supporting efforts to clean up Lake Champlain and add 140,000 acres to Vermont’s Green Mountain National Forest, passing laws allowing SNAP benefits to be used in farmers’ markets and increase access to student lunch programs, vetting federal judiciary and Supreme Court candidates as a member of the Judiciary Committee, and supporting Vermont’s COVID recovery through the small-state minimum. He pointed to his work to achieve bans on land mines and normalize America’s relations with Vietnam and Cuba.

“I am proud to be Vermont’s longest serving senator, because I know my time in the Senate has made a difference for Vermonters and often well beyond,” Leahy said. “I know I have been there for my state when I was needed most. I know I have taken our best ideas and helped them grow. I brought Vermont’s voice to the United States Senate and Vermont values across the world.”

No Vermont Republican has yet announced plans to run for the GOP nomination to seek the seat now held by Leahy.

“It is a historic and bittersweet day,” Welch said in a statement. “Like so many Vermonters, I appreciate the incredible service that Patrick J. Leahy and Marcelle Leahy have given all of us in Vermont for so long, but it is hard to imagine the United States Senate without Patrick Leahy. No one has served Vermont so faithfully, so constantly, so honestly, and so fiercely as Patrick.”

Balint, the state Senate president pro tempore, said she was “personally grateful” for his due diligence in vetting federal judges.

“He would ask the right questions and hold nominees accountable for past words and deeds. He knew the judicial system was the keystone for protecting marginalized communities, LGBTQ+ Americans and working families,” she said.

“As we all will be rejoicing in Senator Leahy’s countless accomplishments for a long time to come, this is also a day of loss for Vermonters and Americans,” Balint said. “Vermonters are losing a longtime champion, and Americans are losing a senior statesman, a man with the wisdom, intelligence and experience to know when to fight and when to compromise in service of building a stronger nation.”

Gray said it’s hard to imagine not having Leahy as the state’s senior U.S. senator. “As Vermonters, we have been served well by Senator Leahy’s fierce commitment to the needs of our small, rural state over the last five decades,” she said.

“Over the last five decades, when at times our nation’s moral compass has wavered, Senator Leahy has remained steady, standing by Vermont’s values and working to ensure our nation respects and protects those values,” Gray said. “From human rights and civil liberties to international engagement and humanitarian relief, Senator Leahy has served as Vermont and our nation’s north star.”

A graduate of St. Michael’s College and Georgetown University School of Law, Leahy succeeded longtime U.S. Sen. George Aiken. He was the first Democrat elected by Vermont to serve in the Senate, and remains so, as U.S. Sen. Bernie Sanders is an independent caucusing with the Democrats.

Information from The Associated Press was used in this report.

He leaves a unique legacy that will be impossible to match.

Text of U.S. Sen. Patrick Leahy's annoucement of decision to not seek re-election

Readers: The following is the full text of U.S. Sen. Patrick Leahy's statement in Montpelier on Monday as provided by Leahy's office, announci…