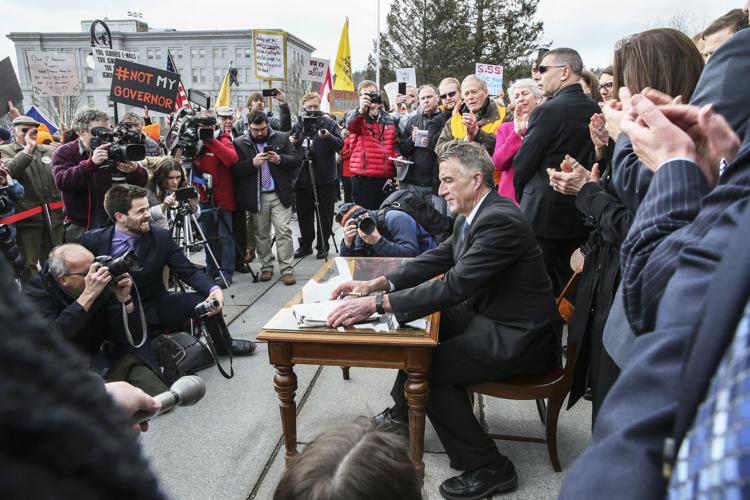 Vermont Gov. Phil Scott finishes signing a gun restrictions bill on the steps of the Statehouse in Montpelier in April 2018. On Friday, the Vermont Supreme Court upheld the legality of the portion of the 2018 legislation that restricts the size of large-capacity ammunition magazines for firearms. 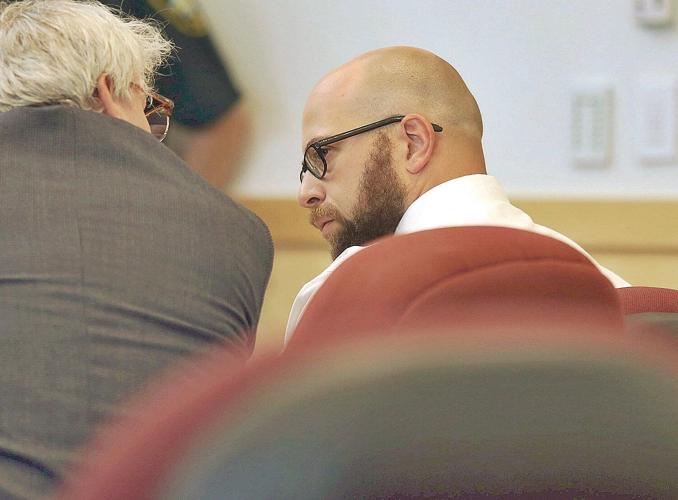 Max Misch is shown conferring with his defense attorney during a court appearance in Bennington Superior criminal court in August 2020.

Vermont Gov. Phil Scott finishes signing a gun restrictions bill on the steps of the Statehouse in Montpelier in April 2018. On Friday, the Vermont Supreme Court upheld the legality of the portion of the 2018 legislation that restricts the size of large-capacity ammunition magazines for firearms.

Max Misch is shown conferring with his defense attorney during a court appearance in Bennington Superior criminal court in August 2020.

BENNINGTON — The Vermont Supreme Court has rejected Max Misch’s appeal on constitutional grounds regarding firearms-related charges he faces in Bennington.

The court issued a decision Friday, rejecting the contention of Misch’s attorneys that a provision in state law under which he was charged violates the Vermont and U.S. constitutions.

“We concluded that the magazine ban is a reasonable regulation of the right of the people to bear arms for self-defense, and therefore affirm the trial court’s denial of defendant’s motion to dismiss the charges against him … " the decision stated in part.

Misch, 37, of Bennington, was accused in February 2019 of two counts of violating a state ban on possession of high-capacity firearm magazines, after he had allegedly purchased two 30-round round rifle magazines in New Hampshire.

The provision in Vermont law was part of gun control legislation package passed in 2018 and signed by Gov. Phil Scott. The specific provision regarding magazines containing more than 10 rounds for long guns and more than 15 rounds for handguns took effect Oct. 1, 2018.

In a 52-page decision, the Supreme Court on Friday rejected arguments from the Defender General’s Office, representing Misch in the appeal, that the provision was unconstitutional. The court affirmed that the Vermont Legislature was within accepted precedent in setting a reasonable limit to the constitutional right to bear arms.

In a statement issued Friday afternoon, Attorney General T.J. Donovan said, “I am pleased with the court’s ruling upholding Vermont’s ban on large-capacity magazines. This is a win for common sense gun policies and for public safety.

He added, “The court found that while the Vermont Constitution protects a right to bear arms in individual self-defense, this right is subject to reasonable regulation. Vermont’s ban on large-capacity magazines, according to the court, is a reasonable exercise of the state’s police power and poses a minimal, if any, burden on the right to bear arms. The court noted that large-capacity magazines are rarely, if ever, used in self-defense.”

It was not immediately clear Friday whether further constitutional appeals will be mounted to the federal courts, or whether Misch’s trial on the two misdemeanor charges will resume in Vermont Superior Court Criminal Division in Bennington.

Each large-capacity magazine charge carries a maximum penalty of up to a year in prison and up to a $500 fine.

Donovan also said in his statement, “With the constitutionality of Vermont’s large-capacity magazine ban resolved once and for all, our focus is now on the resumed criminal prosecution against Max Misch.”

Rebecca Turner, supervising attorney of the Office of the Defender General’s appellate division, which represented Misch in the appeal, said later Friday that the charges against Misch will be going back to Superior Court in Bennngton.

But she added, “We’re clearly disappointed that fundamental civil liberties protected in the Vermont Constitution for 240 years were lost.”

Turner said that “in a significant ruling,” the Supreme Court “effectively established that [the state constitution] is less protective of the right to bear arms in lawful self-defense.”

Misch, believed to be the first person charged under the gun law provision, appealed initially to Judge William Cohen during his Superior Court case, but Cohen determined that the provision was constitutional.

Both the state Attorney General’s Office, which is prosecuting the Misch case, and Misch’s attorneys had jointly requested that the Supreme Court take up the issue of the law’s constitutionality.

Since appointed to the Supreme Court, Cohen recused himself from the Misch appeal and was replaced in the matter by a retired Superior Court judge.

A self-described white nationalist, Misch admitted to trolling former state Rep. Kiah Morris, D-Bennington, online and in person, around the time she filed multiple complaints of racially motivated harassment and threats. She cited the harassment when she stepped down from the Legislature in 2018, after suspending her campaign for re-election to the Bennington, 2-2 House district.

Donovan said in early 2019 that Morris, who is African American, was a victim of racial harassment, but he found no legal grounds for criminal charges. However, a subsequent investigation by Vermont State Police led to the firearms charges Misch now faces.

This article will be updated.

BENNINGTON — A town resident charged with violating a provision of Vermont’s gun control law is open to a settlement, his lawyer said Monday, …