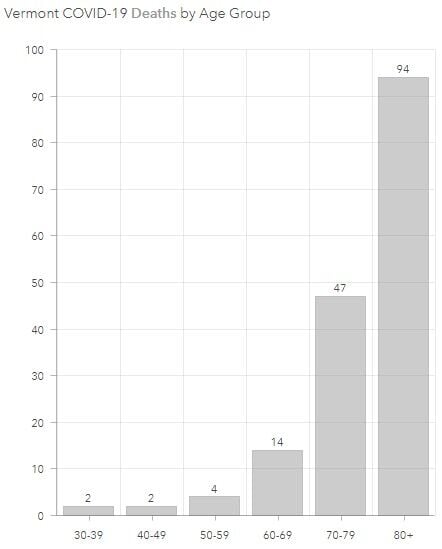 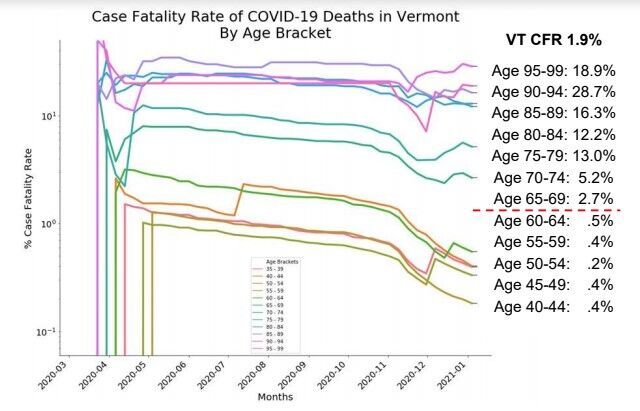 This chart from the Vermont Department of Health shows the mortality rate of Vermonters from COVID-19 by age. The majority of cases are persons aged 65 and older.

This chart from the Vermont Department of Health shows the mortality rate of Vermonters from COVID-19 by age. The majority of cases are persons aged 65 and older.

MONTPELIER — The state rolled out its COVID-19 vaccine distribution plan on Friday, asking for patience as it prioritizes older Vermonters and those with underlying health conditions.

Vaccination for Vermont residents 75 and older will begin Monday, Jan. 25, with the expectation that this group can be vaccinated in about six weeks, given the current supply of about 8,800 doses per week from the federal government.

If supplies increase, the state’s distribution can and will be scaled up, Agency of Human Services Secretary Mike Smith said.

Smith, Health Commissioner Dr. Mark Levine and Gov. Phil Scott said distributing by age is supported by data and is a simple, easy-to-understand and efficient way to make the best use of limited vaccine supplies.

Since the beginning of the pandemic, 92 percent of people hospitalized have been over 60. More than 80 percent of deaths are those over the age of 70, Scott said. “With an incredibly limited supply we must focus on these populations first,” he said.

“What we really need is greater quantities of vaccine,” Smith added. “But we want to set appropriate expectations and communicate clearly where we are and what we expect.” Other states have overpromised and underdelivered, he said — a result Vermont wants to avoid.

The online and phone registration system for appointments has not yet gone live, and its launch will be well-publicized, officials said.

Vaccinations will take place in centralized locations with ample parking and the ability to monitor patients to make sure they don’t have negative reactions to the vaccine, officials said.

Once Vermonters over the age of 75 are vaccinated, the state will administer doses in age bands of five years, with a goal of delivering two doses to Vermonters age 65 and over by the end of March.

After that, the state will prioritize persons with underlying health conditions including COPD, heart disease, compromised immune systems and severe obesity. It will also make significant efforts to make sure the state’s Black, indigenous and person of color (BIPOC) communities are vaccinated.

The Department of Health has been working with community leaders and its own racial equity task force and advisory group to make sure the state “advances the cause of health equity right up front,” Levine said.

Given historic mistrust of the medical profession in those communities, the state will work to build awareness of vaccination and education on how it will be administered. Vaccinations will be scheduled in communities where lack of transportation access would make visiting a centralized site difficult, Levine said.

People who are eligible for the shots should not contact their health care provider or local hospital. Nor should they call the Department of Health looking to “get on the list,” as such a list does not exist.

Once appointments are made, recipients should make every effort to keep the appointment so that vaccine doses are not wasted. The state will have a callback list of people who can take the place of no-shows and cancellations — a “backup plan to the backup plan,” Smith said.

The vaccine is administered in two doses, and appointments for second dose will be made when the first dose is given, Smith said.

Vaccines will be delivered to homebound people, Smith said.

Smith said online reservations are much preferred to phone calls, and asked younger Vermonters to help their parents and grandparents sign up online, in order to prevent the phone system from being overwhelmed.

Smith said as of Friday, 35,000 doses of vaccine have been distributed to nearly 30,000 people, and all skilled nursing facilities have completed their first dose of the vaccine.

Second-home owners will not be eligible, Smith said.

Levine said the state reported 142 cases on Friday, with 44 hospitalized and six in intensive care. As of Friday, 163 Vermonters had been killed by the virus.

Levine also reported that the outbreak at Victory Baptist Church in Addison County has reached 115 cases, but that the majority of cases remain primary infections in households and not secondary outbreaks. He said the church has been very cooperative with the state in addressing the outbreak.

Levine called the situation “a teachable moment ... showing the power of this virus to create community health risk” from asymptomatic people being present together.

As of Friday, Bennington County had 199 cases in the past 14 days, and Windham County 154 cases in the same timeframe.

“These tests results are a good indicator that schools are operating safely,” French said, adding that teachers and staff deserve a great deal of credit for adhering to the guidance. Cases of virus transmission within schools remain rare, he said — “a remarkable achievement given the circumstances” — and give him confidence that schools can return to full-time in-person learning in the months ahead.