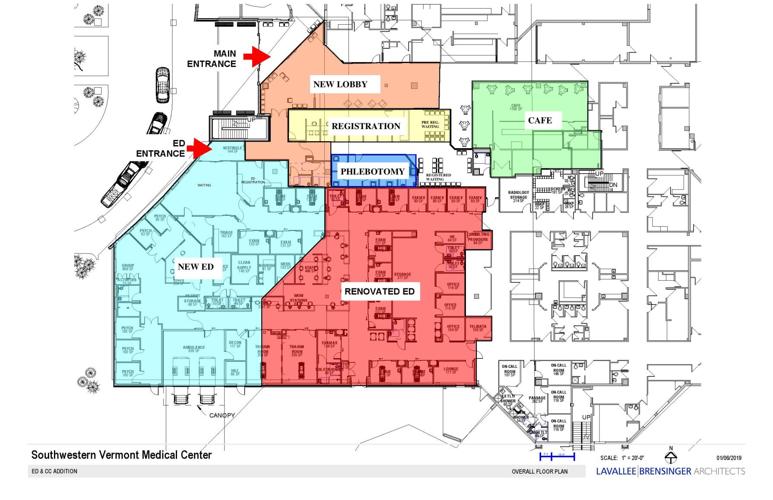 This image shows the floor plan for the currrent emergency department at Southwestern Vermont Medical Center, as well as the extent of new construction from a planned expansion of the department. 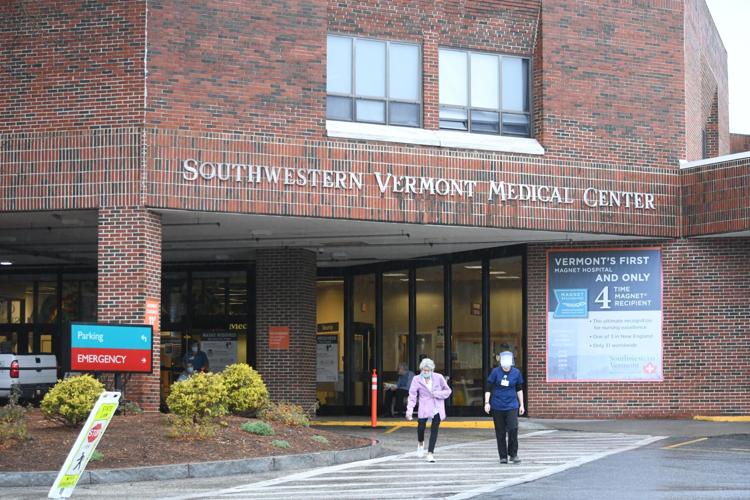 The Emergency Department at the Southwestern Vermont Medical Center in Bennington.

This image shows the floor plan for the currrent emergency department at Southwestern Vermont Medical Center, as well as the extent of new construction from a planned expansion of the department.

The Emergency Department at the Southwestern Vermont Medical Center in Bennington.

BENNINGTON — As hoped, Southwestern Vermont Health Care’s planned $26 million Emergency Department modernization project has won certificate of need approval from the Green Mountain Care Board prior to the end of 2020.

The project will expand the currently undersized department, reconfigure the main entrance to Southwestern Vermont Medical Center and nearby hospital department and include parking and access road improvements. A spring 2021 groundbreaking is planned, with construction expected to be completed in 2023.

SVHC President and CEO Thomas Dee noted that the current Emergency Department was designed in the mid-1990s to accommodate 12,000 to 13,000 patients per year, but that figure recently has averaged about 23,700.

While the department has been recognized for providing outstanding emergency care, he said, staff are working in less than optimal space.

“Modernizing the Emergency Department will create a space equal to the highly skilled and compassionate care provided by our board-certified emergency physicians, Magnet [credentialed] nurses, and members of our support team,” Dee said, adding, “This is a great investment for the community.”

The required certificate of need for a health care system project was approved by the state board on Dec. 14. Previously, the board had asked some follow-up questions of hospital officials concerning the CON application, which were responded to in mid-November, said Stephen Majetich, chief financial officer at SVHC.

Questions involved budget information that may have changed in light of COVID-19 since the spending plan was first filed, Majetich said, adding last month that there are no major permitting obstacles outstanding, and approval was expected by late December.

The next steps, Majetich said Wednesday, include preparation of final work plans, involving the design team, Lavallee Brensinger Architects, of Manchester, N.H., and the contractor, PC Construction, based in Burlington, and obtaining construction permits.

“I think that for the hospital as a whole, we are excited to be moving ahead,” Majetich said.

Features of the new department will include touch-free motion-activated doors and walls that inhibit sound passing from room to room. Currently, the ER rooms are smaller in size and are separated from the central area by curtains.

The addition of high-acuity, low-acuity and collaborative care areas is expected to reduce patient wait times and improve the patient and provider experience, SVHC officials said, and an expanded space for patients experiencing emergency behavioral health issues is an important aspect of the plan.

The renovation of the main entrance will relocate high-traffic services, including the laboratory and imaging registration, closer to the front of the hospital building for ease of navigation for patients.

The project will expand the number of ER treatment spaces to 18, an increase of two, and the new spaces will be larger and enclosed rather than curtained off. A mental health/substance abuse crisis care area will include five treatment spaces.

“The new Kendall Emergency Department [named in honor of major hospital donors, the Donald Kendall family] will dramatically improve the overall care experience for patients and families,” said Dr. Adam Cohen, medical director of the Emergency Department. “It will also provide our clinical team with the setting and tools to practice critical care medicine at the highest level.”

The expansion project will be completed in phases, SVHC officials said, to ensure there is a functional ER throughout the construction.

New construction around the main entrance of the medical center will begin first, extending toward the Toolan Building opposite the drive-up area. There also will be changes to the parking areas and access drive.

Emergency services will then move into the newly constructed section, and renovations will begin in the current ER.

The hospital’s finance team, which works in the Lodge Building near the entrance, will be relocated and that building will be razed. The cost of renovation of the new space for the finance team is included in the project cost, is the cost of demolition of the building.

The SVHC Foundation has created a capital campaign called VISION 2020, which includes improvements to the Emergency Department and the main hospital entrance, and expansion and renovation of the Southwestern Vermont Regional Cancer Center.

Numerous donations have been secured as the Foundation continues its campaign. The Kendall family, owners of Mack Molding, have pledged $5 million toward VISION 2020.

The Foundation also has announced $2 million in donations from friends of the hospital, and SVHC has received three other $1 million gifts toward the project.

The financing plan for the project includes $6.9 million in equity from funds the SVHC Foundation has left over from a project in the early 2000s that did not proceed.

Fundraising contributions of $14.5 million are pledged or expected, and net debt financing figure is approximately $4.3 million.