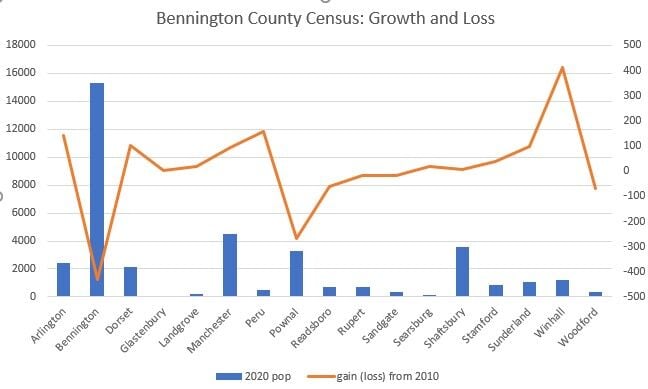 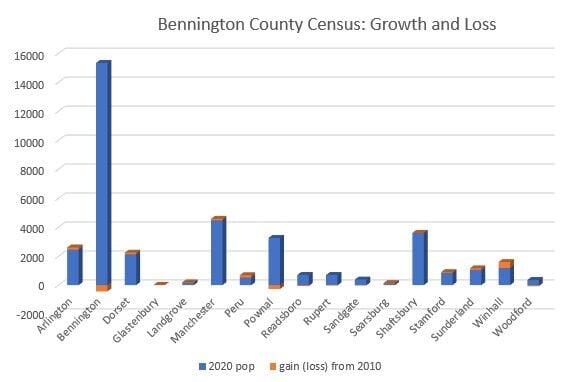 Some resort towns in southern Vermont registered the region’s biggest population gains in the past decade, recently released data from the 2020 census show.

Dover in Windham County, home to Mount Snow resort, grew to nearly 2,000, with the addition of 674 residents, according to a breakdown prepared by the Vermont Center for Geographic Information.

Next is Winhall, in Bennington County, with 413 more residents. A gateway to the Stratton Mountain ski resort, it now posts a population of almost 1,200.

Like the state, both counties registered net population gains from years 2010 to 2020.

At the top is Rockingham, which lost 450 residents and now stands at around 4,800. This is followed by Bennington, which counted about 15,300 residents after losing 431. Pownal also lost 269 people, bringing its total to some 3,250.

“It makes sense to ascribe some of the Southshire population losses to families moving elsewhere after the decade brought plant closures to national firms with a local presence, including Energizer, Plasan and TE Connectivity,” he wrote in an email, “but there’s a very good chance that some of the dynamic we’re seeing is Southshire families moving elsewhere in the county.”

The most population increases elsewhere in Bennington County were also seen in Arlington (up by 140), Dorset (102) and Sunderland (100).

The national and local census data released by the U.S. Census Bureau on Thursday — the most detailed portrait yet of how the country has changed since 2010 — includes race by ethnicity.

Vermont ranked as the second least racially diverse state in the nation, with 89.8 percent of the state’s population identifying themselves as “white alone,” according to the census results published online.

This figure is down from the last census, where 92.9 percent of Vermonters self-identified in this category, a reflection of the country’s growing racial diversity.

Only Chittenden County has a higher racial diversity than the state average, in which 85.7 percent described themselves as white alone. It is the most diverse county in this ranking, followed by Windham County, at 90.1 percent.

Bennington County is tied in sixth place with Caledonia and Rutland counties, with 91.5 percent.

Vermont “does not have drastic disparity in diversity across our counties,” said Michael Moser, coordinator at Vermont’s State Data Center, adding that the most and least racially diverse counties are separated by less than 10 percentage points.