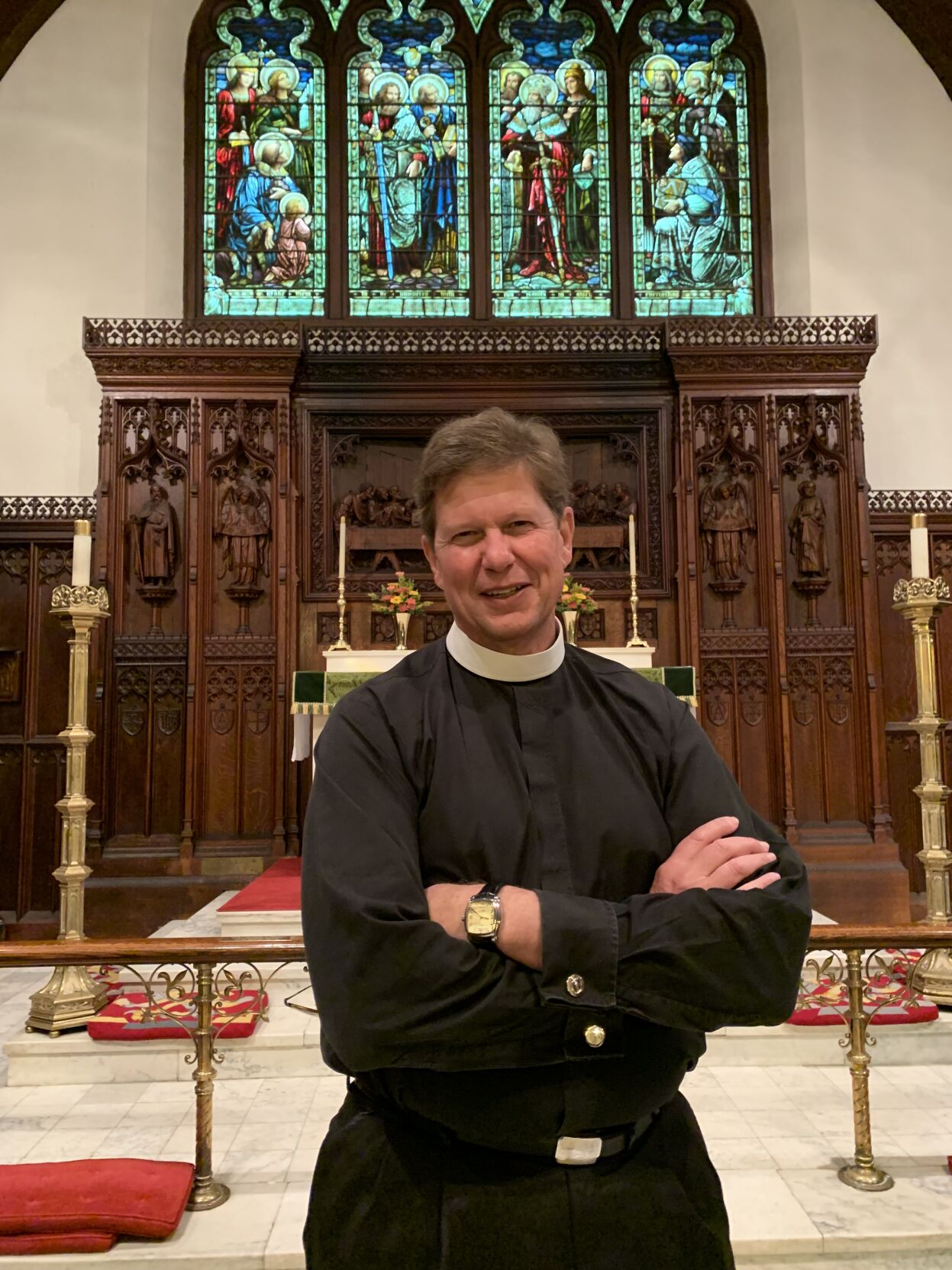 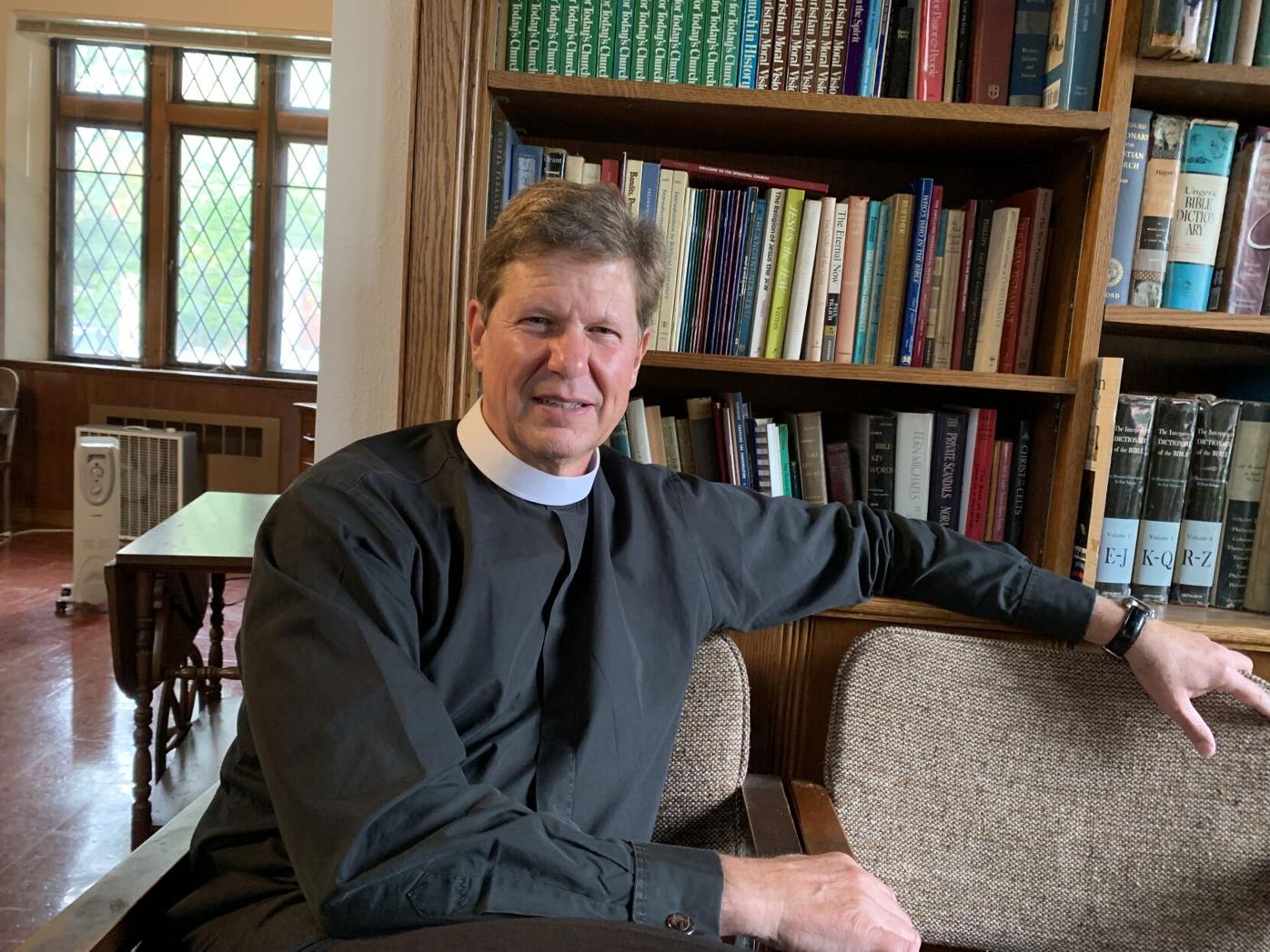 BENNINGTON — During the January 6 insurrection at the U.S. Capitol, Christian religious imagery vied with pro-Trump MAGA gear for pride of place. Video and still images show rioters holding actual wooden crosses; others wore shirts with crosses on them and some carried Bibles.

In some cases the Jesus and MAGA themes merged, as in the banner proclaiming Jesus 2020 or the large portrait of Jesus wearing a MAGA hat.

“The use of those religious symbols to me is blasphemy. And I say this as a person of faith, by the way. I’m not a secularist,” said historian of religion Randall Balmer on Sept. 23 at Bennington College. “It’s hard for me to see how someone who takes the words of Jesus seriously would mount an assault on the Capitol.”

Balmer gave the third presentation in Bennington College’s January 6 Project to an audience at the Center for Advancement of Public Action (CAPA) in addition to 55 people watching on Zoom.

A professor at Dartmouth College, he is author of the new book “Bad Faith: Race and the Rise of the Religious Right.” Though this was his first visit to Bennington College, Balmer is an Episcopal priest who temporarily filled in for two months in 2019 at St. Peter’s Church in Bennington. He also has done so at churches in Arlington and Manchester.

The January 6 Project is an effort led by CAPA to understand the insurrection and respond to the threat it poses to our institutions and our democracy. The next speaker, on Thursday, will be Alexandra Stern, of the University of Michigan, on the topic “The Alt-Right and White Nationalism on the American Landscape.”

Balmer maintains that race, not abortion, led to the rise of the Religious Right in the 1970s. He zeroes in on a lower court decision denying the right to tax-exempt status for any organization engaged in racial discrimination. This was used by the IRS in 1975 to rescind the tax exemption of Bob Jones University, a fundamentalist school in Greenville, S.C., which did not admit African Americans to the student body until 1971 and until 1975, out of fears of racial mixing, did not admit unmarried African Americans.

Abortion, on the other hand, did not become an issue of concern until the 1978 mid-term elections, when it was used as a more palatable issue than segregation to rally evangelical support for Republican candidates. At this time, the widely viewed evangelical film “Whatever Happened to the Human Race” helped solidify abortion as a main issue of concern for conservative evangelicals, he said.

Balmer draws a line from the founding of the Religious Right to keep institutions segregated under the banner of religious freedom, through President Ronald Reagan (elected in 1980), to Donald Trump. He called Reagan the “missing link” between the racism behind the origins of the Religious Right and that of Trump.

“Just as Donald Trump emerged on the national political scene questioning the nativity, that is the birthplace of Barack Obama, the first African-American president, Ronald Reagan burst on the political scene in 1964 in opposition to the Rumford Fair Housing Act in California, which sought equal access for everyone, including people of color for both rental housing and the ability to purchase,” Balmer said.

“He was an outspoken opponent of both the Civil Right Acts of 1964 and the Voting Rights Act of 1965,” he added. “Throughout his political campaigns he very frequently invoked the racially charged phrase ‘law and order.’ ”

Balmer added, “Who can forget his vile caricature of these mythical “welfare queens” – women of color who live the high life on the public dole.” Reagan could never prove such people existed but this didn’t keep him from telling the story.

What clinched this view of Reagan for Balmer is where the former chose to launch his 1980 general election campaign. It was not in his state of California, which was a competitive state in those days, or anywhere else in the country, such as a major city suffering from economic losses in the “Rust Belt.”

“Instead he chose of all places, Philadelphia, Mississippi, a place where 16 summers earlier members of the Ku Klux Klan in collusion with the local sheriff’s department abducted, tortured and killed three civil rights workers, two Jews and an African American,” Balmer said.

In case anyone missed the symbolism of the location, Reagan invoked in his speech at the Neshoba County Fair “the age-old segregationist battle cry states’ rights: ‘I believe in states’ rights.’ ”

Despite the catch-all label, evangelicals are a diverse group in the United States. Roughly one-third of the population falls into this category. There are Black evangelicals, Latino evangelicals and even an Evangelical Left.

Balmer uses a three-part definition of what defines an evangelical: someone who takes the Bible very seriously as God’s revelation to humanity. The impulse is to interpret it literally. Secondly, they believe in the centrality of a conversion or born-again experience. Third, evangelicals believe in what is called the “Great Commission” – to preach the Gospel and bring others to the faith.

“Trump is in many ways a classic demagogue and I think I’m being descriptive rather than incendiary by saying that,” Balmer said. “He knows how to rile people up to do what he wants to do. For evangelicals in particular what he picked up on was their sense of dislocation, their sense of being marginalized. Now a lot it is illusory, frankly, but he picked that up and he was able to kind of amplify their concerns and that was important to them.”

Also solidifying evangelical support, Trump promised acceptable judicial appointments. He got on board with the abortion issue, too, despite never before having been pro-life. “He was really quite adept with scoring political points with that constituency,” Balmer said.

Another attraction is that Trump “speaks the language of victimization fluently,” though it is always about him being victimized.

“But that for a long time has been a staple in evangelical discourse: ‘We’re being persecuted.’ You look at the numbers (of evangelicals) and you say ‘how is that possible?’ Nevertheless that is part of the rhetoric,” Balmer said. “They’re very, very good at that. I think that’s one of the reasons they gravitated to Trump is that he too spoke the language of victimization. They identified with that.”

Before evangelicals retreated from a public stance in the 20th century in the aftermath of the Scopes Trial in Tennessee in 1925, at which the teaching of evolution was under attack, evangelical activists had engaged in progressive causes for decades.

During the Second Great Awakening, in the 1830s in upstate New York, revival followed upon revival. What emerged was an evangelical social ethic, “which really in many ways set the terms for social reform for much of the 19th century,” Balmer said.

Evangelicals supported public education in what were called common schools so the children of the disadvantaged could get an education and improve their lot. Before the Civil War they conducted peace crusades, advocated for prison reform, and for women’s suffrage. In the North evangelicals sought the abolition of slavery.

“I’ve even run across an instance of an evangelical campaign for gun control in the early part of the 19th century,” Balmer said.

While some of these efforts were paternalistic or colonialist, the overall impact left a positive legacy.

After seeing an interview with him in The Washington Post, someone emailed Balmer: “We need someone to write a book, how we can find our way back.”

One thing Balmer would do is point evangelicals to this history of work for the poor and the common good.

“I should think that the other point of guidance for contemporary evangelicals based on their ostensible adherence to the Bible is the New Testament,” he said. “Jesus tells us to welcome the stranger … Jesus tells us all sorts of things: to care for the least of these, to visit prisoners in prison, to care for widows, to care for the hungry and clothe the naked and so forth.

“I would think that that would be part of any sort of political agenda on the part of evangelicals, those who claim to take their marching orders directly from the Bible. But frankly I see precious little evidence of that,” Balmer said.

“So is there hope? One of things I said (in his new book) is that according to the Gospels Jesus raised Lazarus from the dead even though his body had begun to decay. If Jesus can do that, Jesus can repair and revive evangelicalism.”