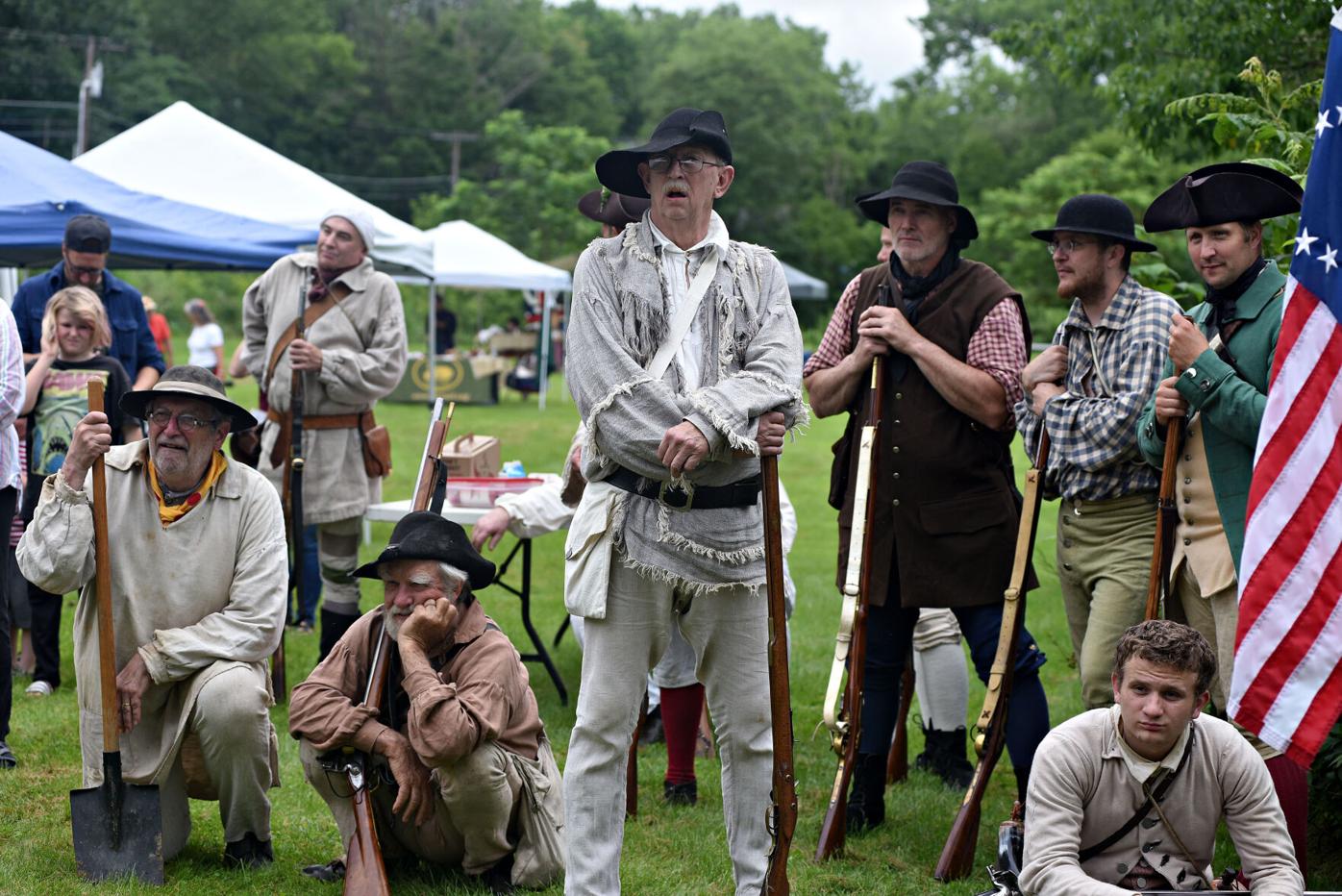 Many were dressed in period costume for the Breakenridge Stand-off event held at McWaters Park in Bennington on Sunday afternoon. Pictured here are men dressed as the Green Mountain Boys. 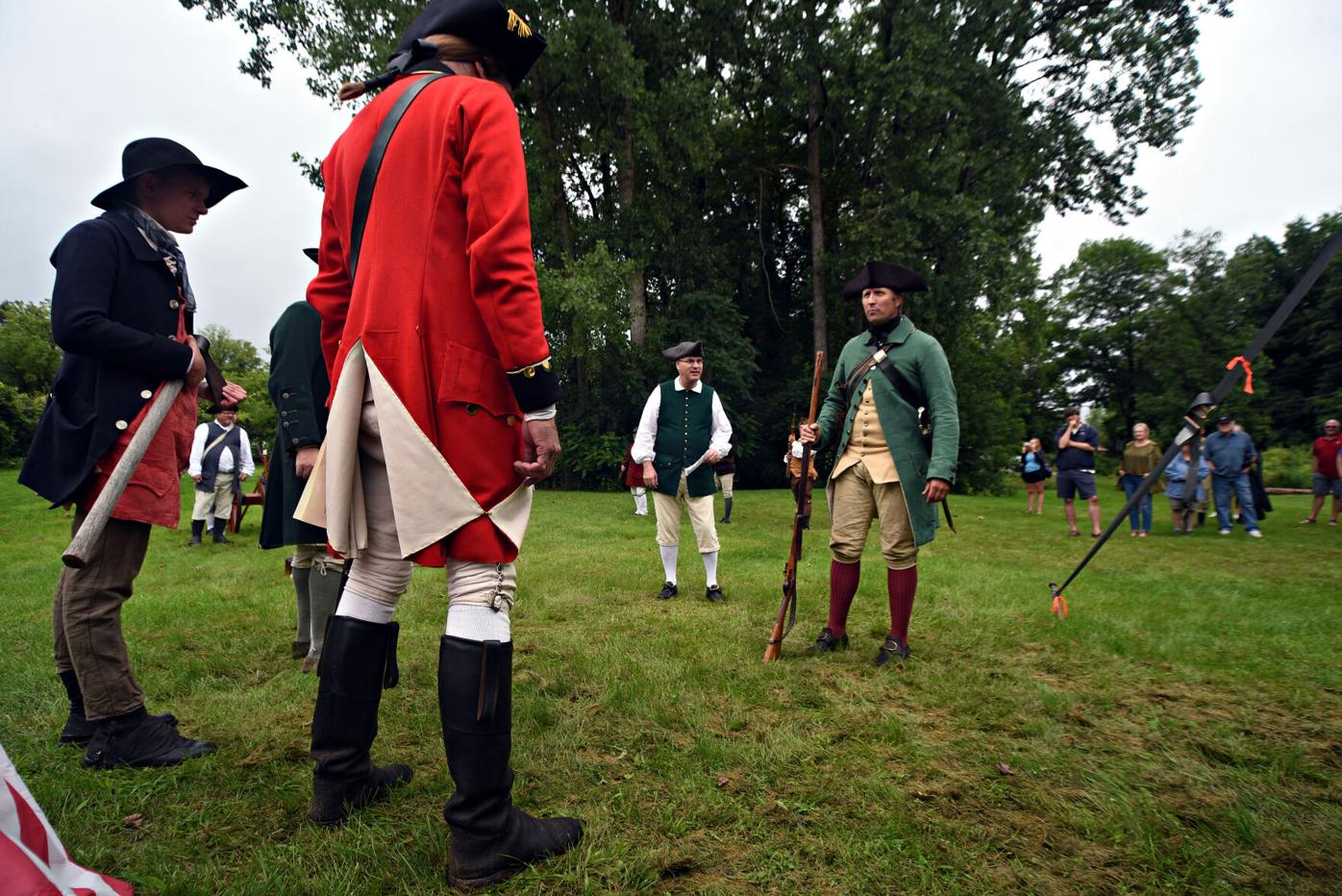 The Breakenridge Stand-off is re-enacted during the event held at McWaters Park in Bennington on Sunday afternoon. 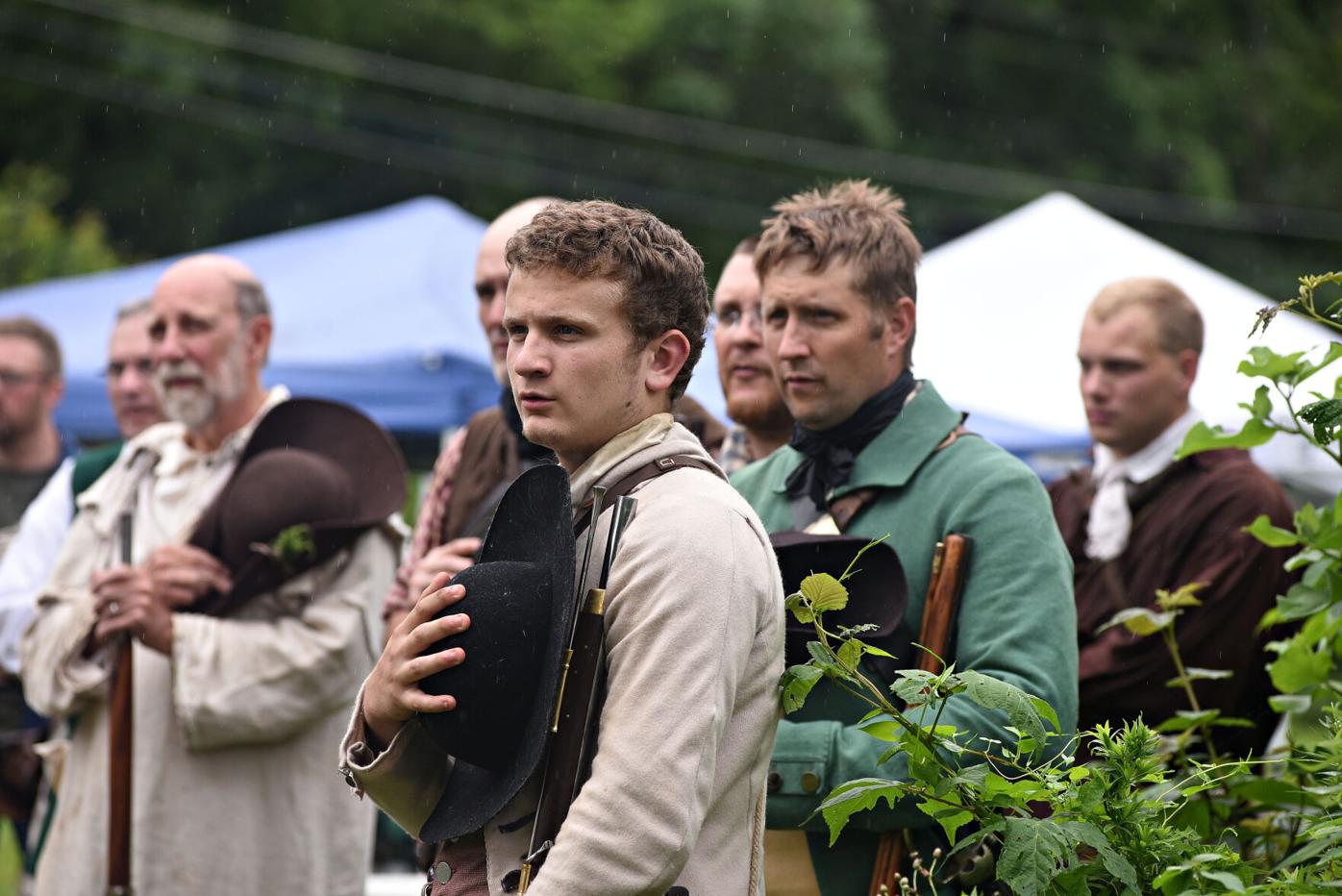 Many were dressed in period costume for the Breakenridge Stand-off event held at McWaters Park in Bennington on Sunday afternoon. Pictured here are men dressed at the Green Mountain Boys. 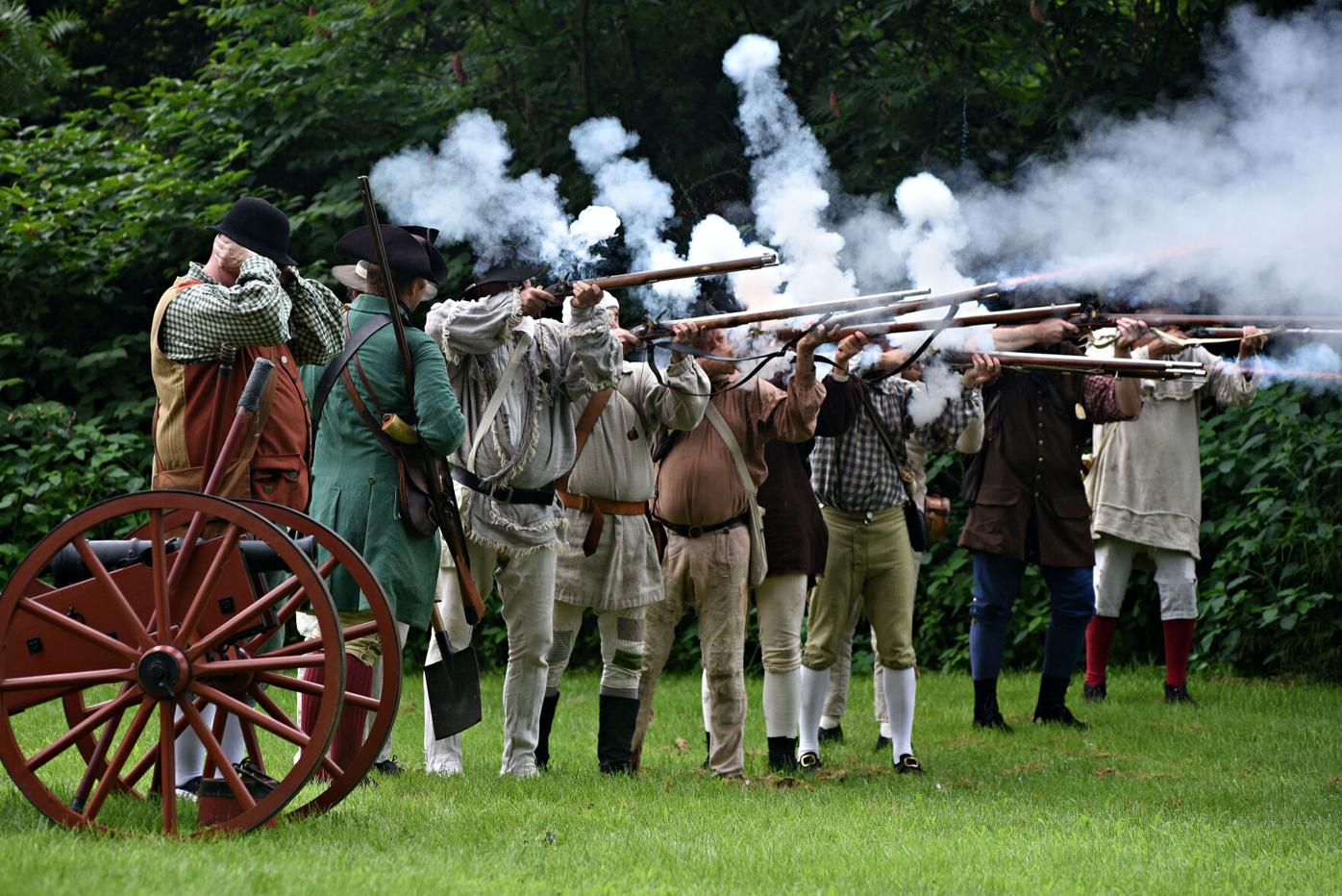 Re-enactors representing the Green Mountain Boys fire at during an event marking the 250th anniversary of the Breakenridge Stand-off, held at McWaters Park in Bennington on Sunday afternoon. There were no shots fired during the event 250 years ago. 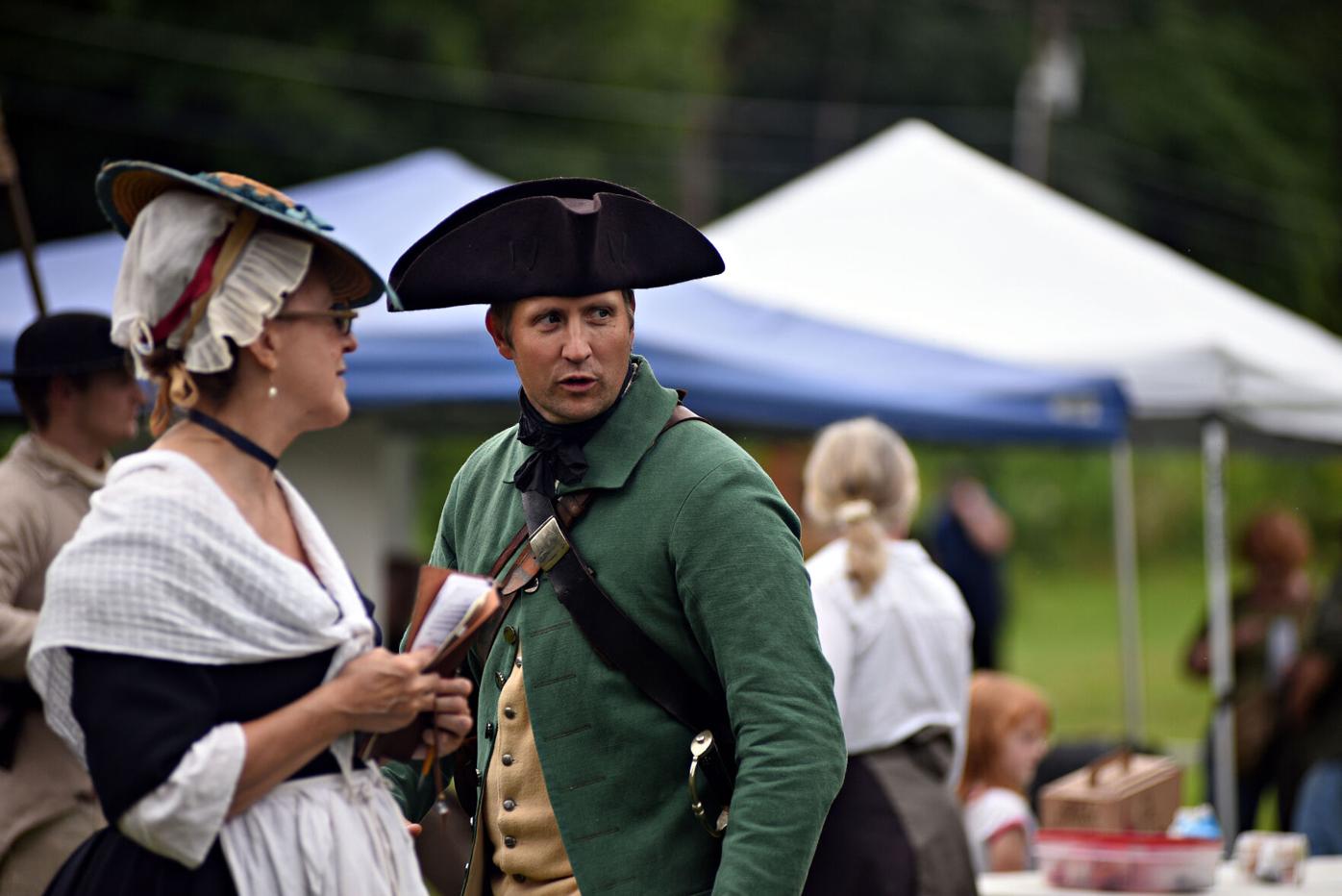 Many were dressed in period costume for the Breakenridge Stand-off event held at McWaters Park in Bennington on Sunday afternoon. 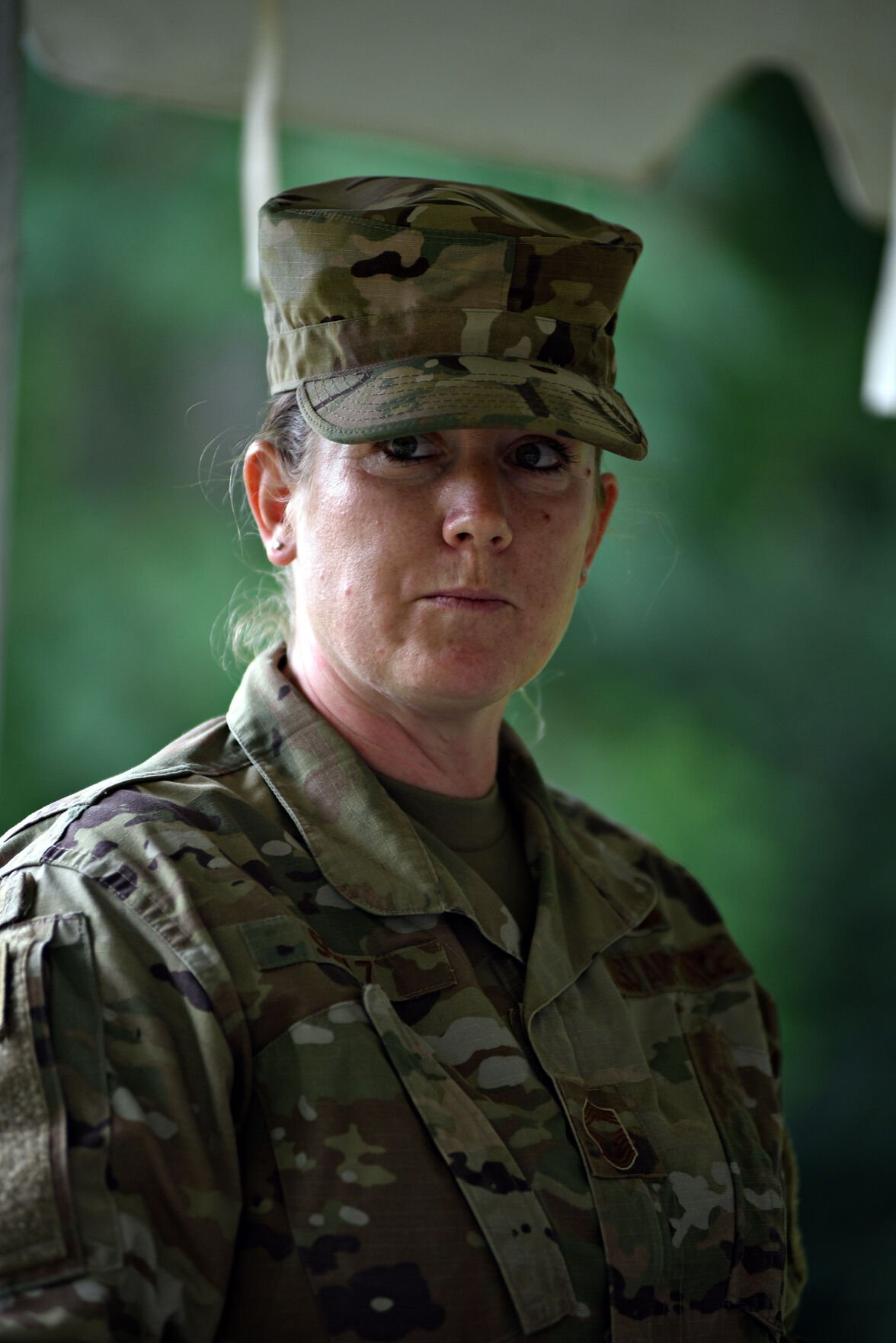 BENNINGTON — The 250th anniversary of the Breakenridge Stand-off was marked with rousing spirit Sunday afternoon during a celebratory event near the Henry Bridge.

That’s where a seminal event in the creation of what became Vermont and of the Green Mountain Boys of Ethan and Ira Allen took place on July 18-19, 1771.

Under occasionally spitting rain clouds that spared the more than 100 participants and spectators from a soaking, several speakers praised the early settlers of this area and their independent spirit.

Those farmers faced off in 1771 against officials from New York who came to enforce rival land claims and evict those — including James Breakenridge — who had established farms in what is now the Bennington area.

A monument erected in 1927 at the Breakenridge home site on Murphy Road commemorating the standoff calls the event the “Birthplace of Vermont.”

The ceremony portion Sunday concluded with a colorful representative standoff between “Yorkers” seeking to serve paperwork from an Albany, N.Y., court and locals who stood between them and the nearby Breckenridge farm.

A sheriff’s posse 300 strong from the then-British colony of New York, which included the mayor of Albany, lawyers, magistrates and militia, was confronted in 1771 by about 250 members of emerging and soon-to-be famous Green Mountain Boys militia at Henry Bridge.

Although there were no shots fired 250 years ago, the historical re-enactors, or living historians, afterward obligingly fired a couple of impressive musket volleys and cannon blasts for the spectators.

The event also included walking tours led by historian Robert Hoar from McWaters Park near the red covered bridge to the site of the former Breckenridge farm. Village Garage Distillery offered a spirits tasting at the corn crib barn on the property of the historic Henry House on Murphy Road.

Remarks also were offered by Brad Little, vice president of the Descendants of the Green Mountain Boys.

Morrissey said the joint legislative resolution, put forth by the entire local delegation, will be presented to the Bennington Historical Society and be included in state of Vermont archives, and will itself become part of history.

Representing the Guard for the ceremony, Schulz said that in learning about the 1771 standoff, she “vastly underestimated the impact and emotional connection that I would feel when researching it.”

Looking at those attending the ceremony, she said, “I can see, and I can feel firsthand the connection that Vermonters, the communities and the families have to our militia.”

Those serving in the Guard, sometimes deploying overseas, also have always been members of the local community, she said. “Your steadfast support means more than you could ever know,” she added.

Organizers of the event said the Breakenridge Stand-off was the first of several historic dates that also are coming up for their 250th anniversary. Plans are being made to celebrate those events as well — locally, at historic sites around Vermont and the region.

All of the subsequent Vermont events, of course, follow and are related to the 250th anniversary of the July 4, 1776, signing of the Declaration of Independence.

Locally, the Battle of Bennington victory over a detachment from a British army invading from Canada through upstate New York, concluded on Aug. 16, 1777 — one among many key events in an historic year that saw the disputed territory become the Republic of Vermont, and in 1791, the 14th U.S. state.

A detailed account of the Breakenridge Stand-off and the history of conflicting land grants originating from the colonial governors of New Hampshire and New York that preceded it can be found in a video posted by the Bennington Museum.

Among notable events during the decades-long dispute over the rival claims was the arrest and two-month stay in an Albany jail for Samuel Robinson, Bennington’s founder and leader. That helped ignite resistance to the “Yorkers” among Bennington area settlers.

Robinson was arrested by a Yorker posse in North Pownal near the Petersburgh, N.Y., line, after he had previously evicted New Yorkers from borderlands.