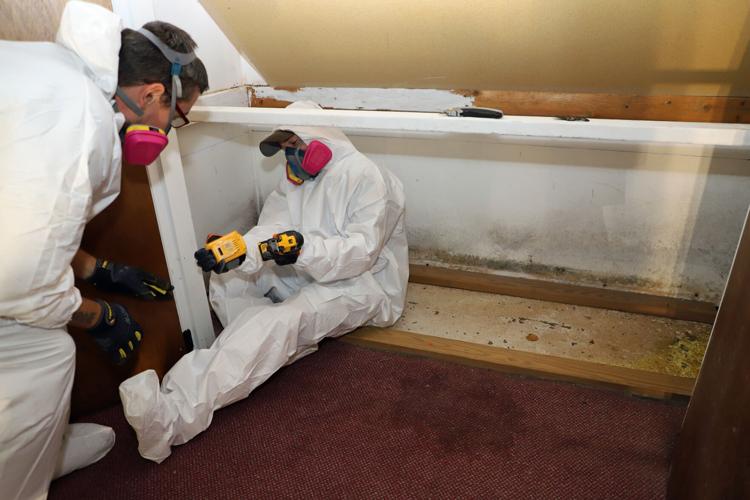 Workers remove sections of drywall from a home in Londonderry that shows visual signs of mold. 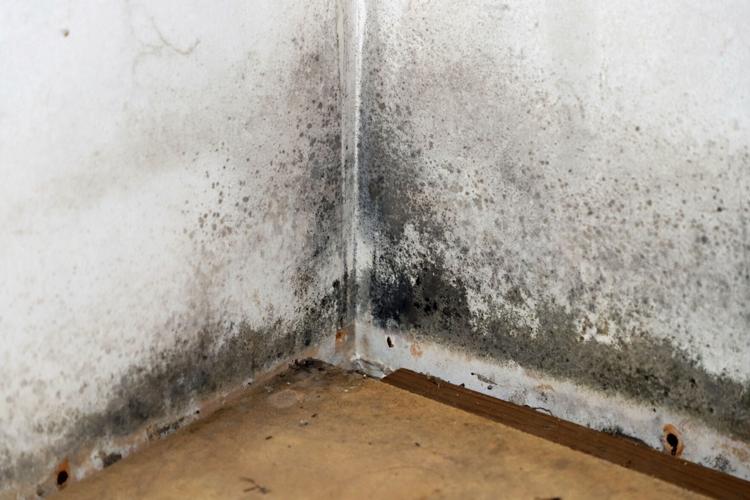 Visual mold growing along an interior basement closet wall of a home in Londonderry. 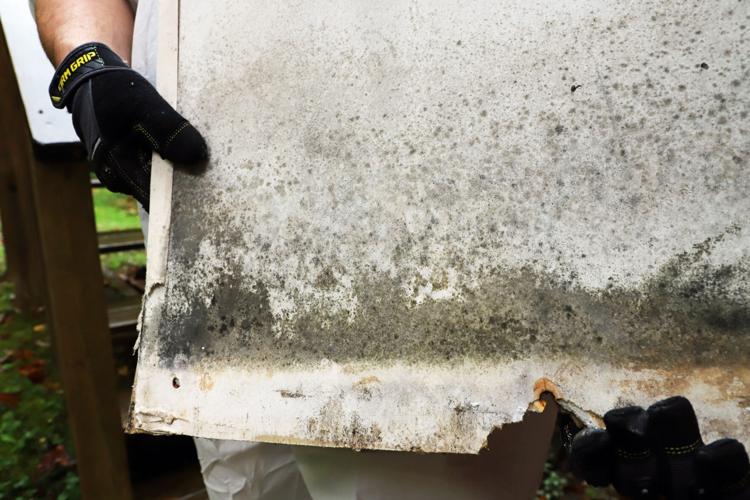 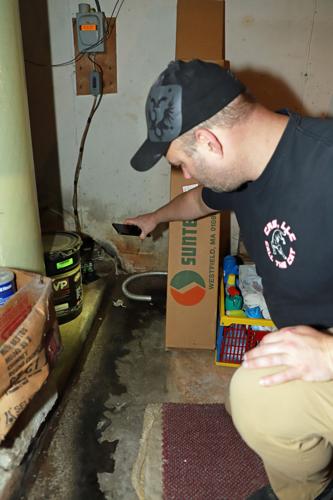 Charles Nystrom, owner of Catamount Restoration Services, shines light on skirt drain in basement of home in Londonderry that is the source of moisture that has led to mold in the home.

Workers remove sections of drywall from a home in Londonderry that shows visual signs of mold.

Visual mold growing along an interior basement closet wall of a home in Londonderry.

Charles Nystrom, owner of Catamount Restoration Services, shines light on skirt drain in basement of home in Londonderry that is the source of moisture that has led to mold in the home.

Mold problems are on the rise because of the unusually high amount of rainfall this past summer, sending many homeowners scrambling to get the condition under control, local remediation experts say.

“It’s been one of the worst summers we’ve seen,” said Chuck Nystrom, co-owner of Catamount Restoration Services, a Vermont company specializing in mold inspection and remediation, in Manchester Center. “About a 90 percent increase over last year’s dry summer. It’s like night and day.”

According to data obtained from the National Weather Service in Albany, N.Y., the average precipitation for July for Bennington between 1991 and 2020 was 4.65 inches. This past July, it was 9.48 inches, more than double the prior year.

“Mold needs two things to thrive,” said Nystrom, “moisture, which is water and humidity, and the right high temperatures. We had both this summer. It’s led to a lot of problems.”

Finding areas with water or moisture intrusion — such as around leaks in roofs, windows, leaky pipes or where there has been flooding — is the best way to identify where mold might hide. Other clues to mold growth are “musty” or “moldy” smells.

Nystrom said if the right conditions are present, for example, 80 degrees and over 60 percent humidity, for three days or more, atmospheric or environmental mold can happen without any outside water penetration or a water leak, especially if there’s no airflow.

Because of Vermont’s humid climate, mold is being found in many homes, especially older homes that have been retrofitted with new windows or updated insulation, Nystrom said.

“Homes used to breathe a lot more than they do now, so unless there’s an air exchange going on, that humid air sits there," he said. "The problem with older homes is there has to be a balance of air. When newer windows are installed, it throws off that balance, and the house’s health suffers."

He said whether a home is new or old, he recommends every homeowner in Vermont get a dehumidifier that’s properly sized to the space, especially during summer.

The Banner tagged along on one of Catamount’s remediation jobs in the Londonderry area to see what goes into removing mold from a residence and how to spot the spores, hopefully before they become a big problem. The 40-year homeowner reached out to Nystrom after spotting black mold inside a closet recently.

Nystrom points to a skirt drain installed around the home. It’s an older-style setup that was meant to allow water to drain off a slab basement, while at the same time, the system allows water to enter the house inside the poured walls to relieve hydrostatic pressure. “I’m not a big fan of these," Nystrom said. “I’m never big on allowing water inside.”

Above the skirt drain is a prominent area of mold growth, black fanned out from the sitting water, reaching up onto the painted concrete about a foot. From there, it spreads to the drywall, where mold spores climb a foot off the moist carpet, then into a closet and along the walls of the finished basement.

“Mold will grow on anything, painted concrete, wood, organic materials, porous surfaces, rugs, even stainless steel. The difference with steel is, you can wipe it off. Nearly anything else, it’s an issue. The goal obviously is to clean all the mold up. What that takes depends largely on how far it’s gone.”

Nystrom’s plan is to seal off the rest of the house with plastic sheeting, “containment,” he calls it, then cut 2 feet of drywall from the floor up to reveal how severe the problem is. “You never know where it is until you reveal what’s behind the walls,” he said. Next, he’ll remove the carpeting and follow the trail wherever it leads.

“Closets and attics are typically some of the worst areas for mold. Mold doesn’t like air movement, so these closed areas are usually the worst," he said. "Even with a dehumidifier, if there’s no airflow, it typically can’t pull enough water to make much of a difference. The rule of thumb is the least likely you are to visit a space, the more likely that’s where the mold is.”

Mold can be harmful to humans, particularly those under the age of 5, the elderly and those with pre-existing conditions, such as allergies, asthma, or compromised immune systems. It can contribute to chest tightness, throat irritation, runny noses and headaches and severe health problems, such as asthma attacks or fungal infections. How someone might react to mold depends on several factors, including the type of mold, the amount of mold present, the length and number of times a person is exposed, family history, and overall health status.

According to the Vermont Department of Health website, there are no federal or Vermont certifications or licenses for mold remediation or testing. General contractors and home inspectors often can identify mold and moisture problems, and suggest solutions. Some contractors specialize in mold cleanup and might be well-suited for challenging cases of mold growth.

Another problem that people do not fully understand is that most insurance companies consider mold invasion to be the result of homeowner neglect. “Most of the jobs I do are paid out-of-pocket by homeowners, not covered by insurance. Even if it is covered, there’s usually a cap that is easily taken up, even on smaller jobs. Costs can easily reach into thousands of dollars on a big mold issue.”

If you are a tenant, talk with your landlord about mold problems. If the problem is not addressed and is serious, tenants can call their town’s health department or the Vermont Department of Health for further information.

Nystrom also urges people to check on elderly family members and neighbors. “These issues can easily go undetected, especially for someone who’s older and maybe not aware,” he said. “It’s really important.”