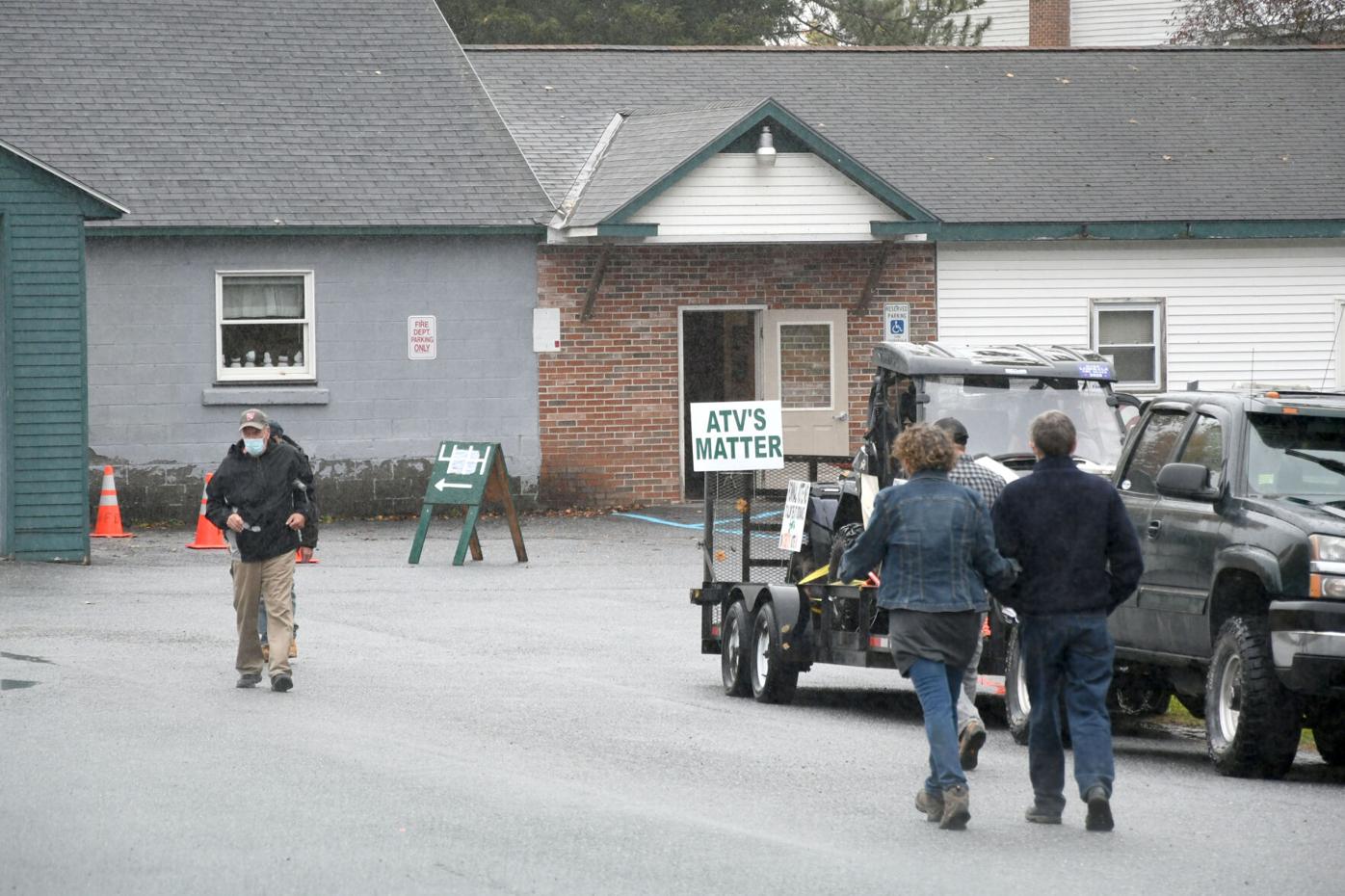 Voting was steady at the polling station at the Pownal Valley Fire Department Central Station on Tuesday for the special vote of ATVs in Pownal. 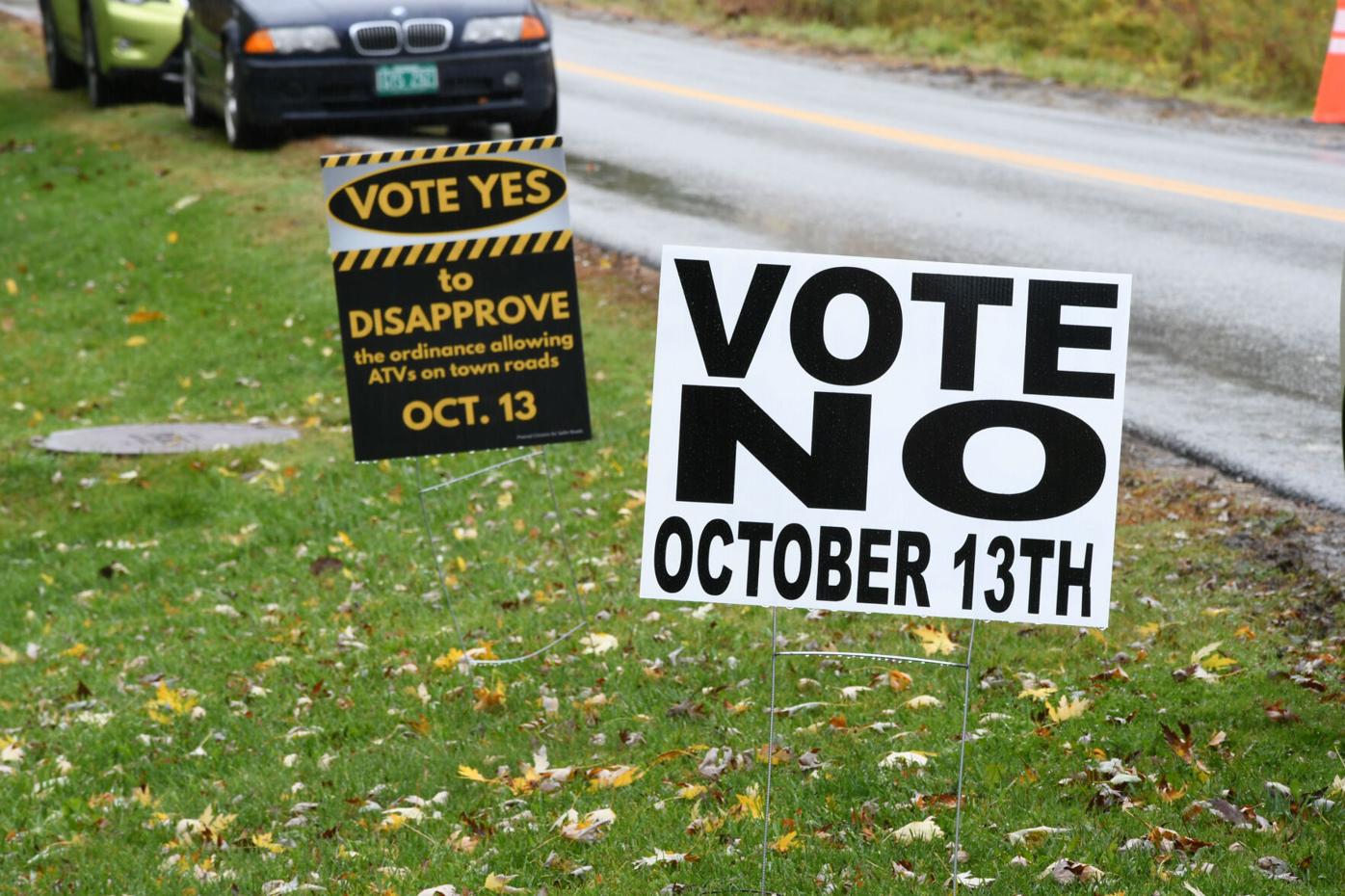 GILLIAN JONES — BENNINGTON BANNER Signs of opposing views stand on the road at the polling station at the Pownal Valley Fire Department Central Station on Tuesday for the special vote of ATVs in Pownal.

Voting was steady at the polling station at the Pownal Valley Fire Department Central Station on Tuesday for the special vote of ATVs in Pownal.

GILLIAN JONES — BENNINGTON BANNER Signs of opposing views stand on the road at the polling station at the Pownal Valley Fire Department Central Station on Tuesday for the special vote of ATVs in Pownal.

POWNAL — Town voters have overturned a controversial ordinance regulating ATV use and opening up most local roads to the vehicles.

The ordinance was adopted by the Select Board in July but then challenged in a citizen petition drive that forced Tuesday’s vote.

Reached Tuesday evening, Jim Kocsis, a leader of the petition effort, said, “My main goal was to bring this to a townwide vote. The voters have spoken. I hope we can now come together as a town to see how this will all work out going forward.”

“I would like to thank everyone who came out to vote on such an important issue,” said Select Board Chairwoman Angie Rawling. “Unfortunately it did not pass. The board put a lot of hard work into this ordinance, yet again another year will go by with no rules or regulations. When the residents have issues, please call the police or sheriff department and do not call or email the board to ask us what we are going to do about it. My goal is to have all Pownal residents to be healthy and happy and enjoy their lives.”

Opening up more town roads to ATV use has been a controversial issue in Pownal for more than a decade. In 2011, the Select Board had voted to open all town roads to their use but not long after rescinded that vote after receiving multiple complaints from residents.

Various ATV proposals have been put forth over the past two years, but none had the backing of the Select Board, which in July, voted to adopt the ordinance. A petition drive among those opposed to the ordinance forced a townwide vote, which the board scheduled for a special town meeting on Tuesday, although the petitioners had requested that it be voted on during the Nov. 3 general election.

Much of the debate in recent weeks has focused on the process by which the board developed and then adopted the ordinance, which opponents contended lacked transparency and adequate input from a range of townspeople.

They requested that a diverse committee be formed to hash out details of an ordinance more residents could support.

Board members rejected that and insisted the process, despite the lack of in-person meetings because of the COVID-19 epidemic, was transparent, and that they had listened to myriad opinions through phone calls and emails, as well as from callers during videoconference meetings.

A key issue has been exactly how many town roads should be opened to ATV use. In its final version, the ordinance went from the current five town roads open to ATVs, stemming from a past ordinance, to well over half of town roads.

The ordinance, however, banned use on 23 listed roads to anyone who was not a resident, and all open roads were to be used only to reach ATV trails, not as trails to ride on.

Opponents of the ordinance contended that what roads should be opened should be systematically worked out and each considered separately. They also contended that it should be made apparent which trails or private land riders would want to access via town roads.

Because they are state highways, riding is not allowed on Route 7 or Route 346.

A major objection of opponents concerned the limited response of law enforcement to ATV riders speed, driving recklessly, driving under the influence or violating other laws or state regulations for all-terrain vehicles.

The Bennington County Sheriff’s Department, which has a contract with the town to patrol 30 hours per week, has a “no pursuit” policy for ATV riders who refuse to stop for officers in cruisers.

Board members and supporters of the ordinance pointed out that state legislation that took effect July 1 made much ATV regulation statewide, rather than by each town’s ordinance.

That legislation required licenses; decals or stickers; insurance and registration similar to a motor vehicle, helmets and other safety gear, as well as the same requirements for riders from other states.

Speaking in support of the ordinance, board member Robert Jarvis said it “makes legal, regulated and respectful riding easier, while getting many of the illegal riders off of the roads. The requirements for insurance, licensed drivers, and registration are immediate benefits.”

The town also has begun to work with the Vermont ATV Sportsman’s Association in a program under which the statewide organization provides funding for sheriff’s departments for ATV-related patrols.

In Bennington County, VASA also provided a loaned side-by-side off-road vehicle for deputies to use during patrols. According to Danny Hale, the VASA executive director, Sheriff’s Department would be able to take advantage next year of a VASA cost-sharing program to purchase on off-road patrol vehicle for the county.

Hale told the Select Board during a recent meeting that the organization’s goals include educating the riding public on state and local laws and regulations and helping law enforcement identify areas where there are problems involving ATVs.

VASA will work on those goals through the local Pownal Regulators ATV Club.

Opponents of the ordinance pointed out that the off-road vehicle and the VASA contract is to cover all of Bennington County, not just Pownal, and they called for seeing how the program works before any more Pownal roads are opened to ATVs. However, many opponents said VASA involvement here is a positive step.

Also commenting after the vote were three other Select Board members.

Jarvis said, “I think the closeness of the vote shows that ATVs are an important and integral part of life in Pownal, and I am looking forward to working on more opportunities for outdoor recreation that is inclusive of all. One really positive thing that came out of this process, no matter the result of the vote, is that we now have strong VASA involvement in our town and with our local club. I do fear for the future of Pownal politics because I believe a precedent has been set. Those who can’t afford the expensive advertising and legal representation are at great risk of being silenced in their own community.”

Board member Michael Gardner said, “I am disappointed in the false information that was put out there about this ordinance, but I am still glad that we will get quality enforcement for the town at no cost to Pownal. I hope that no matter how people voted, that they will see that we are trying to listen to everyone and meet their needs.”

Jamie Percey said, “My hope is that the town will work on coming together on future ventures. We need to move forward as a community.”

Richard Williams, an opponent of the ordinance, said prior to the vote, “What I think is ironic here is that I believe the two opposing sides are actually closer on this issue than they believe they are. Both sides want an ordinance and both sides want enforcement.”

Williams and others proposed an advisory committee to include members of the Pownal Regulators ATV Club, the opposition group, Pownal Citizens for Safer Roads, and other interested parties to work on a new ordinance that has wider town support.