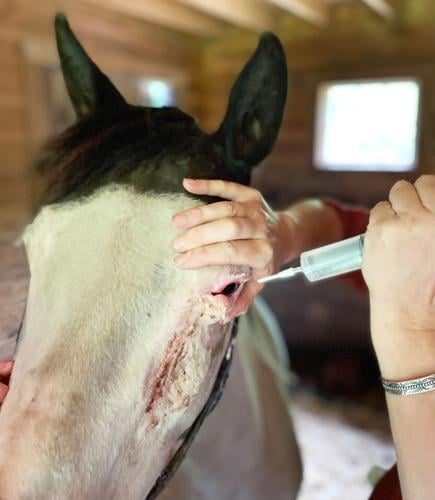 An injured horse seized from a nonprofit rescue farm gets eye treatment at the Dorset Equine Rescue facility. 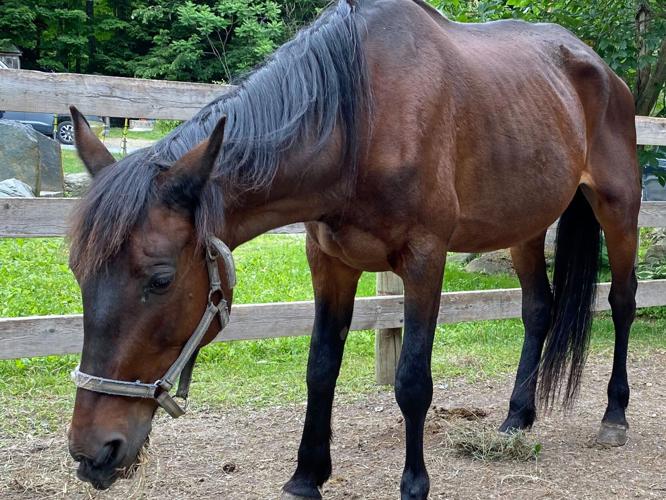 A malnourished horse at the Dorset Equine Rescue after being removed from the Hoofbeats and Dreams animal rescue facility in Tunbridge.

An injured horse seized from a nonprofit rescue farm gets eye treatment at the Dorset Equine Rescue facility.

A malnourished horse at the Dorset Equine Rescue after being removed from the Hoofbeats and Dreams animal rescue facility in Tunbridge.

DORSET — The Dorset Equine Rescue is caring for several injured and malnourished horses after Vermont State Police seized the animals from a nonprofit rescue facility near Montpelier after a volunteer reported abuse.

Most of the animals were malnourished, and several needed medical care, including one horse with a seriously neglected eye infection.

A volunteer at the Hoofbeats and Dreams horse rescue barns in Tunbridge had contacted the U.S. Humane Society about the situation. After the Humane Society sent an email to the state police, troopers from the Royalton barracks executed a search warrant at the shelter, located 30 miles south of Montpelier.

Police found several animals on the property not being housed or cared for properly. In all, 13 horses, one mini-mule, one llama and six dogs were seized on the 2-acre property.

Police charged Debra Densmore, 55, facility owner, with cruelty to animals after the investigation Friday morning. She was issued a ticket to appear in court and is scheduled for July 7 to answer the cruelty charges in the Orange County Criminal Courthouse in Chelsea.

On its website, The Dorset Equine Rescue reported that the effort between state officials, state police, veterinarians, volunteers and several concerned parties took over eight hours to complete. Once the animals were seized, seven of the horses went to Dorset Equine Rescue for rehabilitation, six went to a temporary foster farm, the llama went to a volunteer farm, and all six dogs were taken to a local dog shelter for adoption, when they are healthy enough.

Once the horses are cleared of contagious illnesses or any major medical problems and have the proper paperwork to travel over state lines, Dorset Equine plans to transfer the llama and four horses to the Tomten Farm and Sanctuary in New Hampshire, a partner rescue of the Dorset facility.

“We feel fortunate that working with the Vermont State Police and other state agencies, we were able to help the animals in this particular case,” said Jen Straub, founder and executive director of the Dorset Equine Rescue. “Animal welfare cases in our state seem to be increasing, as this is the third large animal welfare investigation that The Dorset Equine Rescue has assisted with already this year. What we saw was pretty bad. I know there have been tons of complaints going back to 2013 about this place. Sadly, law enforcement is understaffed, and unfortunately, animals aren’t taking priority. I wish it were different.

“I do know that the more this gets out there, the more it is publicized, the more people will say, ‘Oh, wow, this is happening right in our backyard.’”

Hoofbeats and Dreams rescue barns, a 501©3, states on its website that it is “a nonprofit organization dedicated to saving horses in need, and offering low cost and free riding to low-income families, children and individuals.” It lists its core values as “Integrity, Accountability, Respect and Creativity,” who want, “every horse who enters our property to reach their potential and to spread their wings and fly.”

Contacted by the Banner for comment, Densmore responded by email, “I would love to, as (the truth) is very far from what is being said. My 17-year-old daughter is also being charged. With all the lies being said, we don’t stand a chance of getting a fair trial.”

Dorset Equine Rescue is asking the public for donations to help with the expenses of the rescue and care of all 13 equines. For more information, please visit their website at dorsetequinerescue.org.

BENNINGTON — An Arlington woman previously charged with abusing a horse was back in court Monday, this time charged with violating conditions …