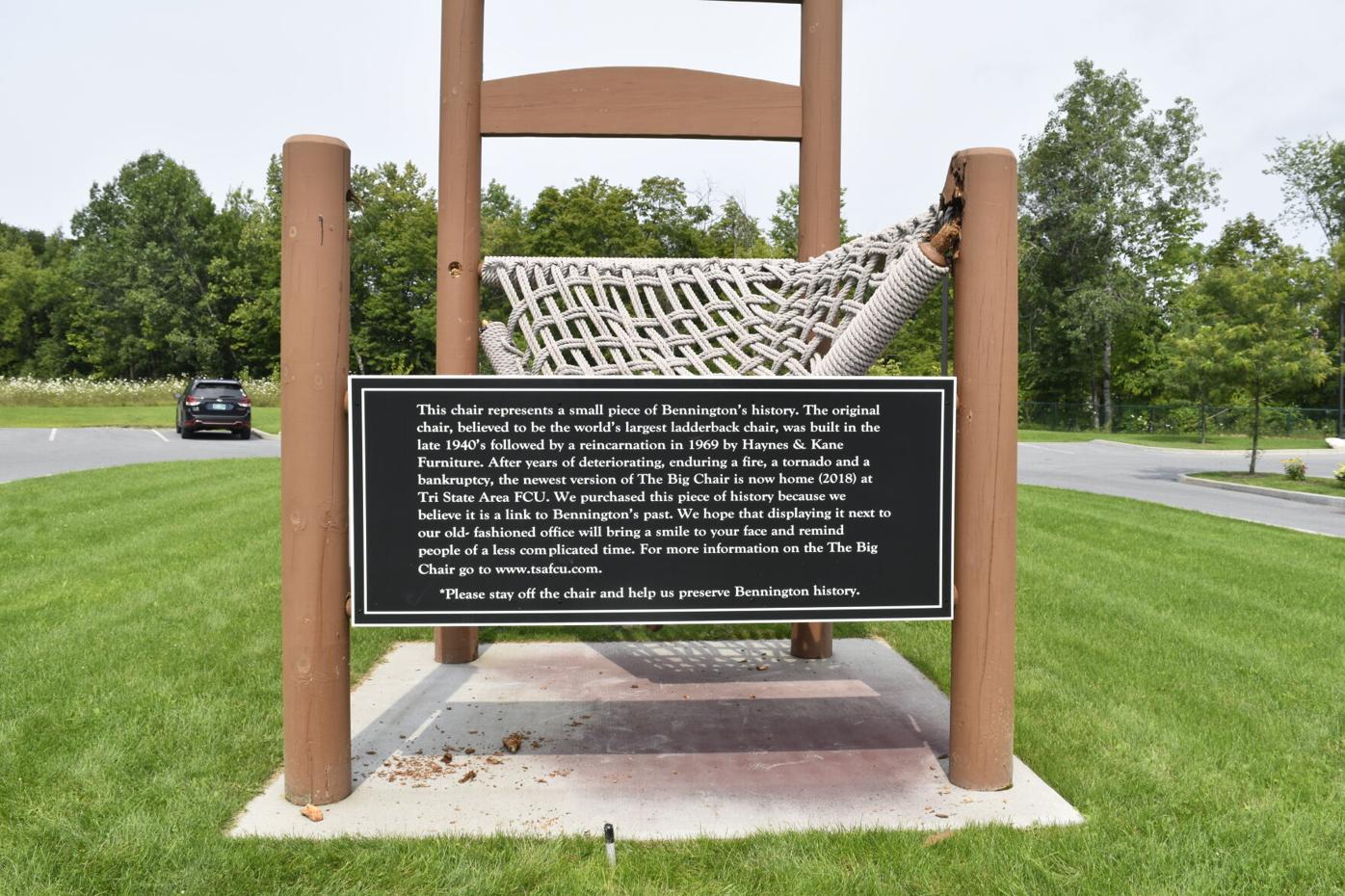 The giant ladderback chair at Tri State Area Federal Credit Union was damaged by people climbing on it Thursday morning. 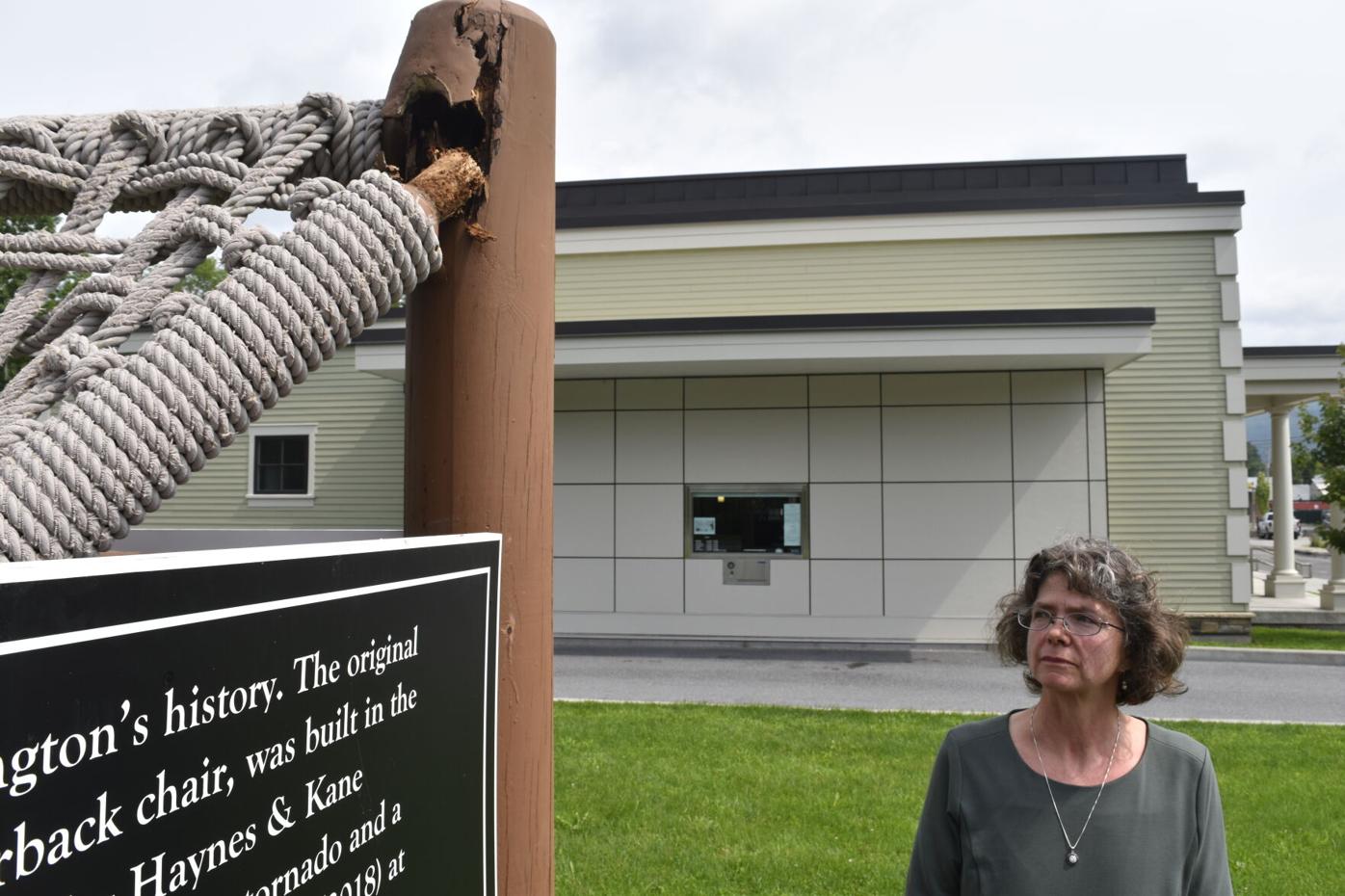 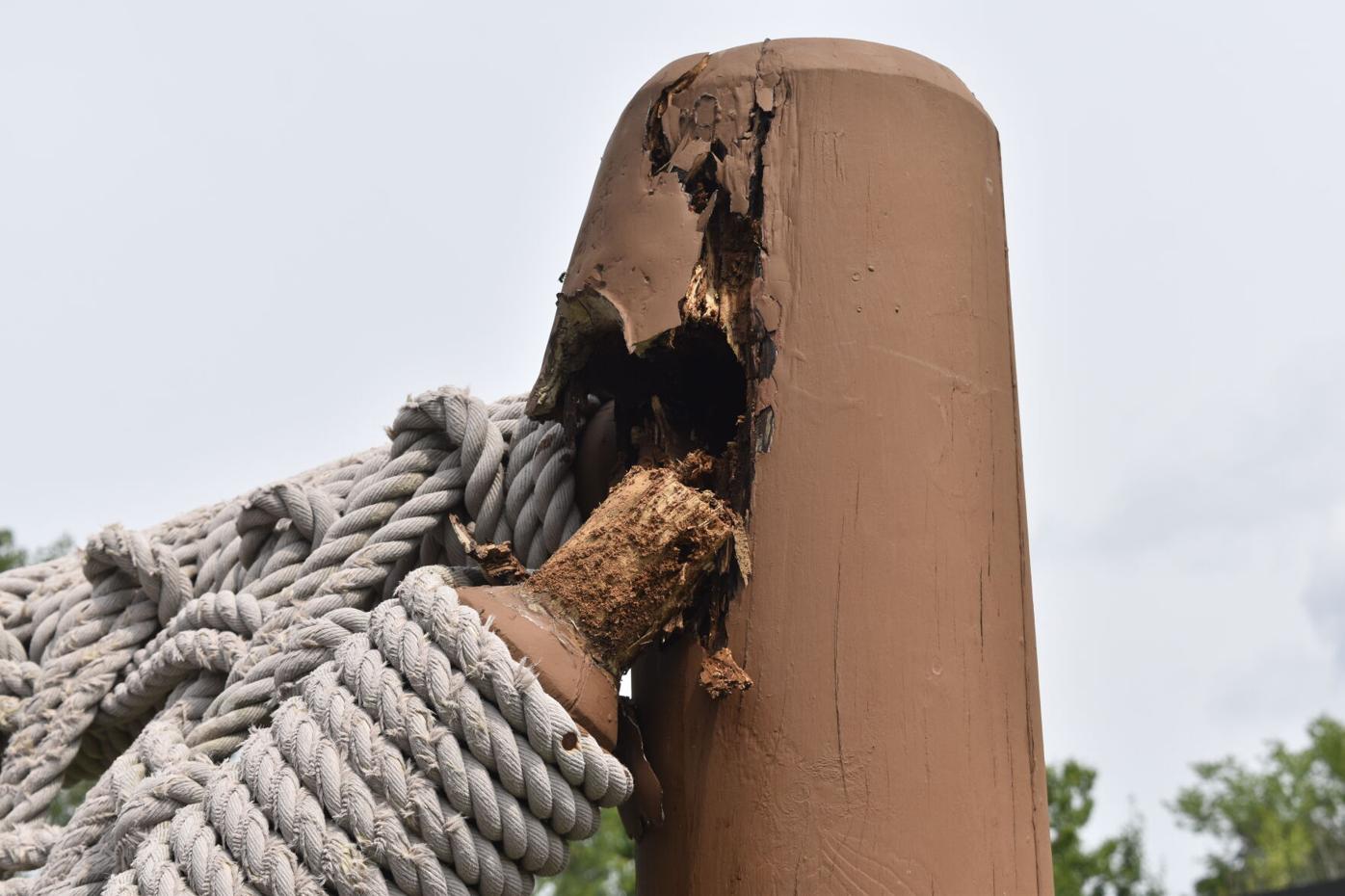 The weight of four persons on the giant ladderback chair caused the joints to rip apart early Thursday morning.

Those reasons are clear as day on Washington Avenue, where the region's famous 19-foot-high ladderback chair stands broken, its wooden joints in splinters and its seat no longer in place. The "Big Chair" is a replica of the original chair that stood in front of the former Haynes & Kane Furniture store until 2000, when weather damage rendered it unsalvageable.

Bennington Police and Linda M. Bow, the credit union's chief business officer, said security video shows the individuals climbing the chair and jumping on it. It also shows the moment the wooden joints holding the seat together gave way, and one of the party picking up and carrying an injured person away from the scene.

Bow said she and her fellow employees at the Washington Avenue office were disheartened to find the damage Thursday morning. Bow spotted it first, as she arrived at the office.

"I noticed right off the chair had been vandalized," she said, adding that it was clear the damage wasn't weather-related. "We took a few minutes and loaded up video recordings from the night before and were able to establish what happened," she said.

The video showed four people coming into view, climbing on it and jumping on the chair.

"I was so shaken this morning," said Bow, a Bennington native.

She'd rather her business get in the newspaper for its investments and contributions to the community, not for damage to its property, she said.

"To get negative attention because something so sad and frustrating can happen to our property, and also to something historical for the community, is upsetting," Bow said.

"We have people on a daily basis come and take pictures with the chair. They drive here specifically to see it," Bow said. "It's going to be hard to replace. It wasn't meant for climbing."

The damage to the chair is significant. The weight of the people who climbed upon it didn't just snap the cross sections at the joints; it tore the sockets wide open.

Low said the credit union does not yet know what the financial damage is, or whether the chair can be repaired. A claims adjuster was due at the scene later Thursday.

According to Bennington Police, security video footage from the credit union shows that two males and two females climbed on the chair around 3:20 a.m.

Police said the video showed the seat gave out, causing three of the four individuals to fall. One of the individuals in a light-colored hoodie, apparently female, was injured from the fall, remained on the ground for several minutes and was carried away by a male.

Anyone with information on the case is asked to contact police at 802-490-1030. Officer Scott Legacy is investigating.

The "Big Chair" replica was constructed with 3,000 pounds of cedar and white pine in 2012. It was purchased by LaFlamme's Furniture in 2015, and when LaFlamme's went out of business, Tri State Area Federal Credit Union President James Martinez purchased it at auction and pledged to keep it in Bennington.

It has stood at Tri State's Bennington branch on Washington Street ever since.