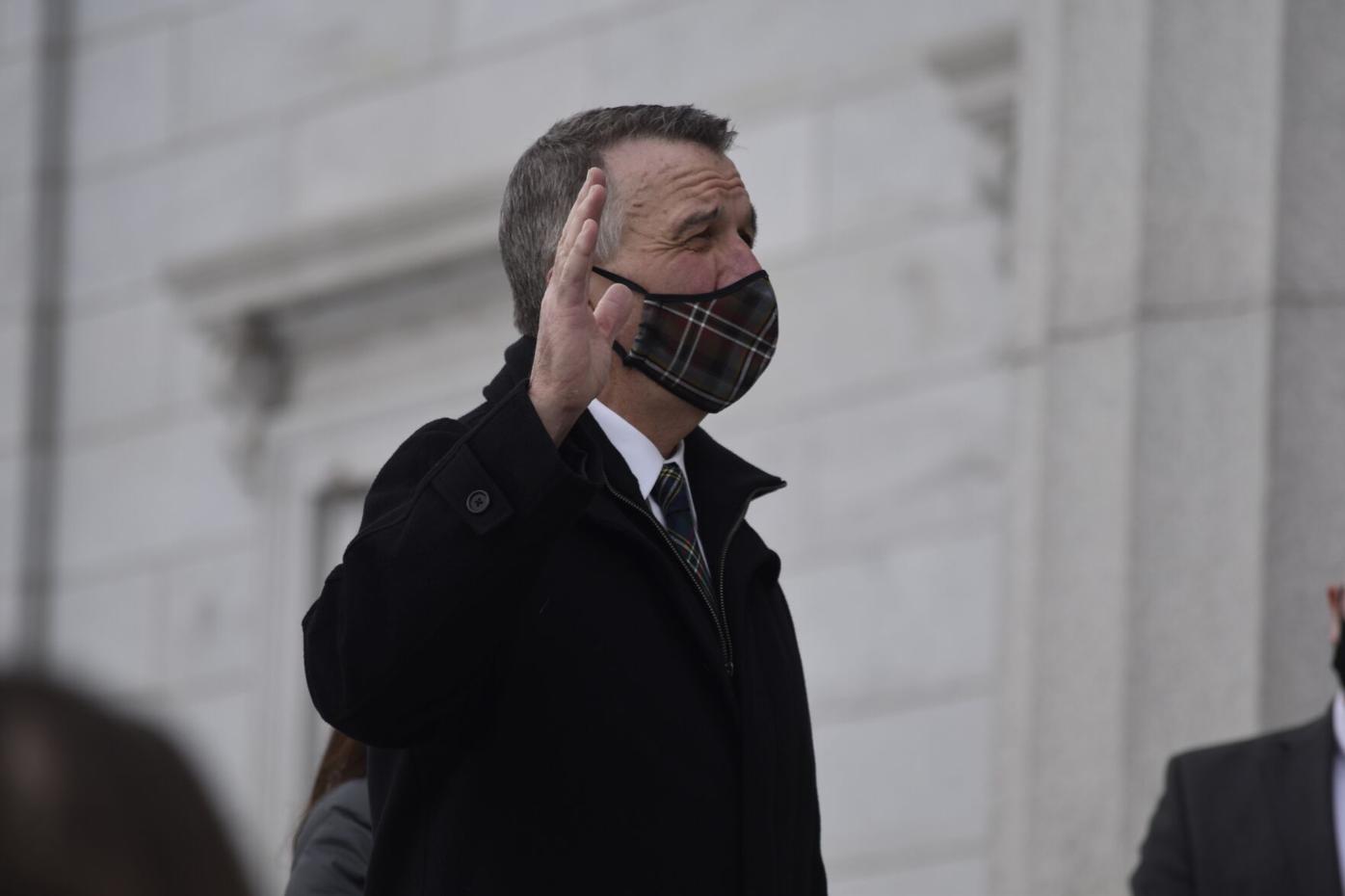 Gov. Phil Scott takes the oath of office for his third term as Vermont governor on Thursday. 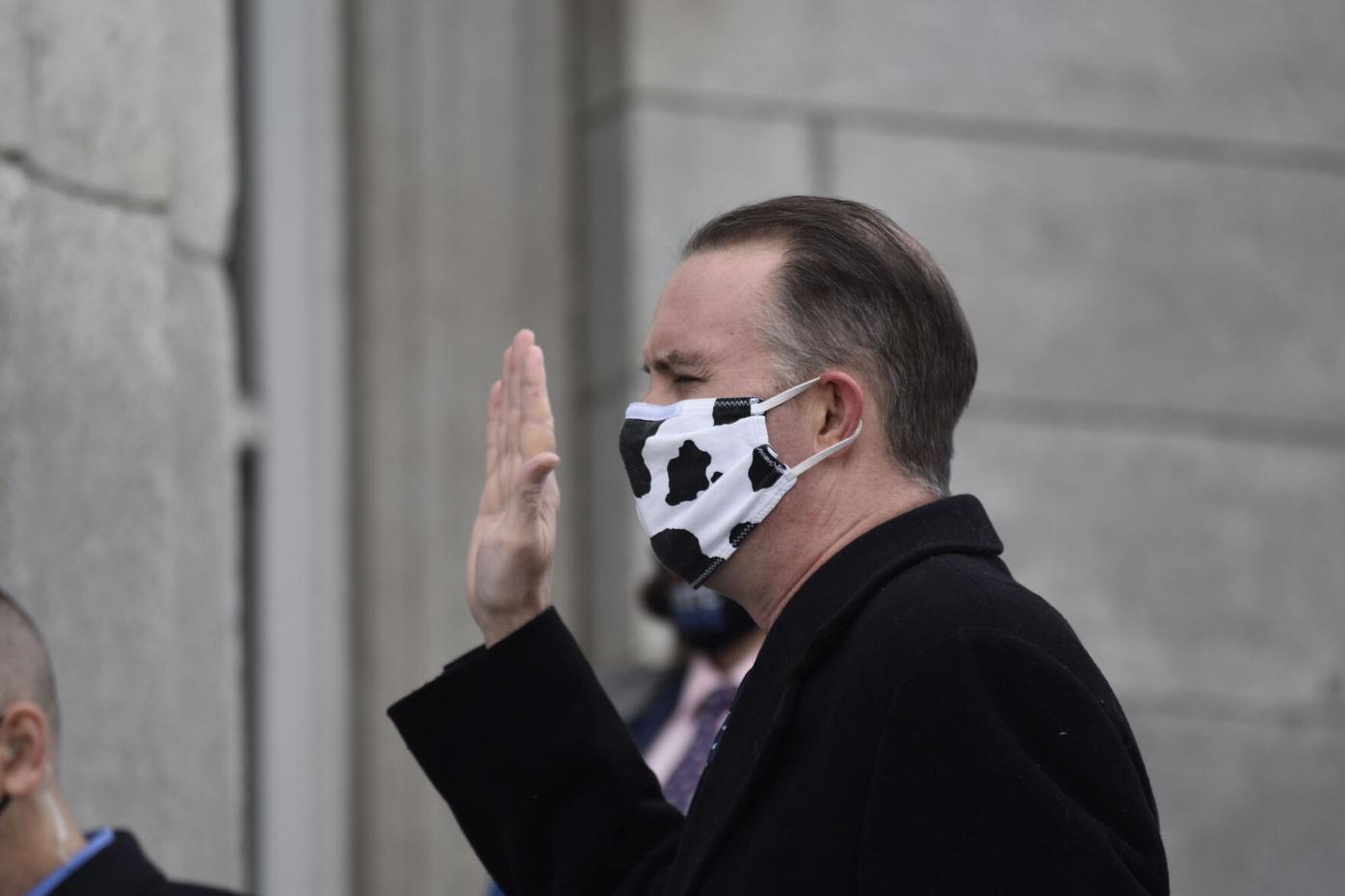 Attorney General T.J. Donovan takes the oath of office on Thursday, in Montpelier. 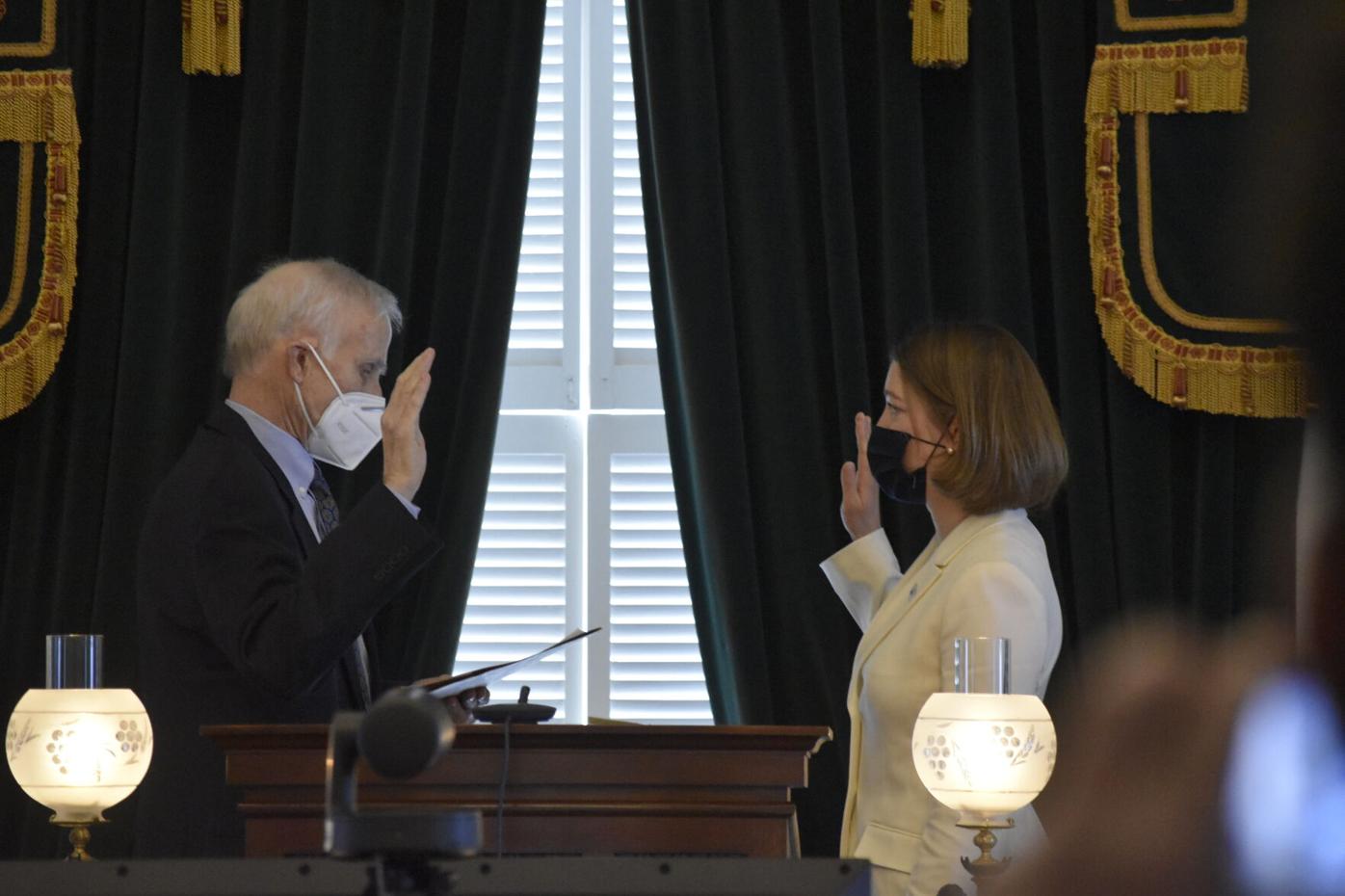 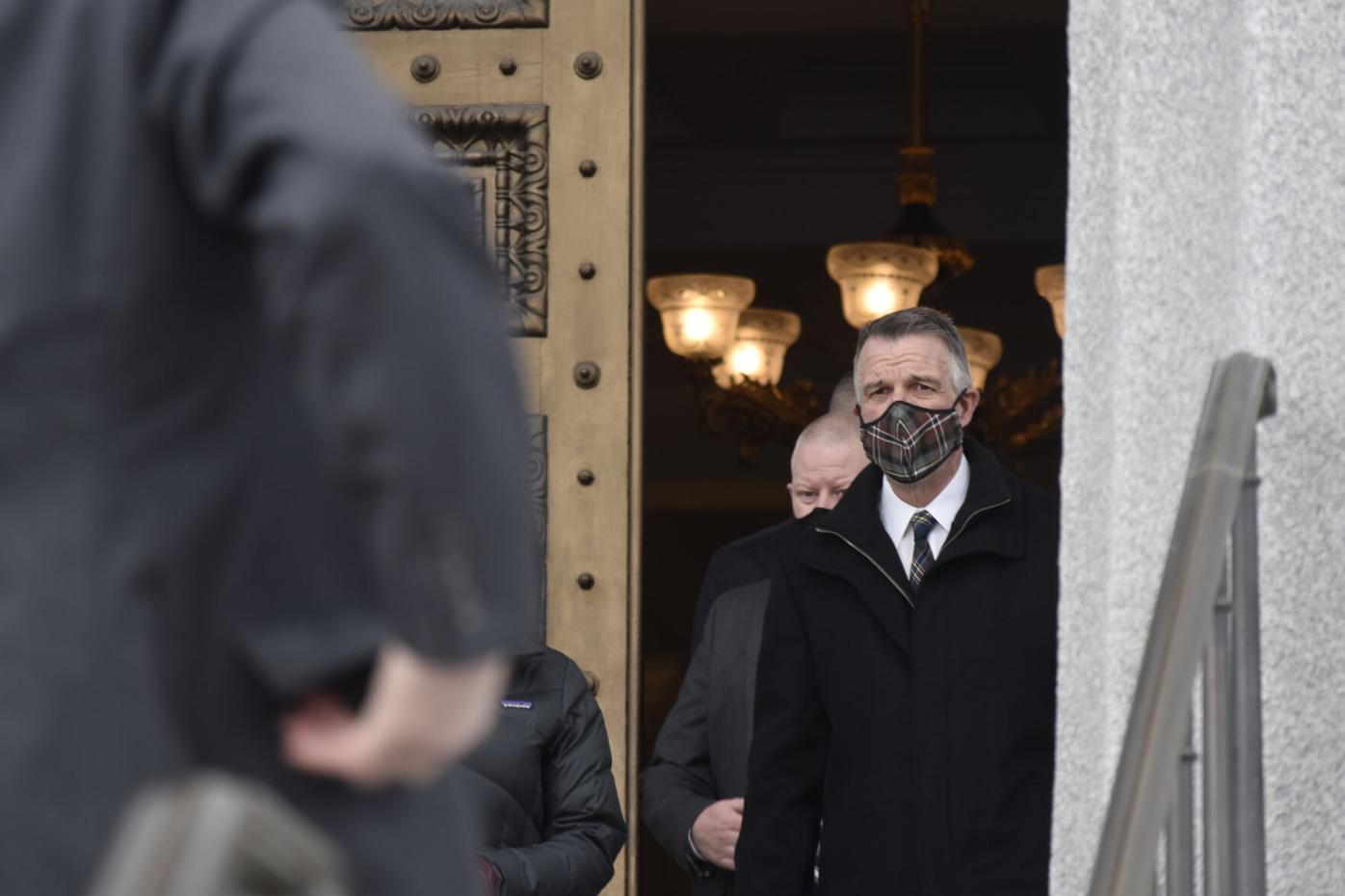 GREG SUKIENNIK -- BENNINGTON BANNER Phil Scott walks out the front door of the Vermont Statehouse to be sworn in for his third term in office on Thursday.

Gov. Phil Scott takes the oath of office for his third term as Vermont governor on Thursday.

Attorney General T.J. Donovan takes the oath of office on Thursday, in Montpelier.

GREG SUKIENNIK -- BENNINGTON BANNER Phil Scott walks out the front door of the Vermont Statehouse to be sworn in for his third term in office on Thursday.

MONTPELIER — Vermont Gov. Phil Scott capped off an inauguration day full of reserve and resolve Thursday with a speech outlining his plans for the state’s recovery from the COVID-19 pandemic.

Usually, the governor delivers a speech to a joint session of the Vermont Legislature after having been sworn in. This year, with the pandemic and the shock of Wednesday’s storming of the U.S. Capitol in mind, Scott addressed the state by television instead of in the House chamber.

Lt. Gov. Molly Gray was sworn in earlier Thursday in the state Senate chambers, while Scott and the state’s other constitutional officers took the oath of office outdoors, on the front steps of the Statehouse.

In his third inaugural address, Scott called for doing things differently, focusing on rebuilding the state’s economy and improving educational equity. “The pandemic has put the spotlight back on our most fundamental challenges,” he said.

Much of the agenda Scott outlined focuses on PreK-12 education.

Scott, a Republican from Berlin, proposed to organize all the state’s child development work within the Agency of Education, saying it would break down a “bureaucratic silo” and align the state’s curriculum from child care through technical training.

Scott also said he would direct the Agency of Education and Department of Health to develop a plan to safely return all students to in-person learning before the end of the school year, hopefully by April.

“The fact is: We have some of the best conditions in the world to begin this work. For our children and their future, we must reestablish full in-person instruction, routines and relationships as soon as possible,” Scott said.

In the past, when the state innovated to overcome challenges such as Tropical Storm Irene, it has fallen back into familiar ways of doing things, and at a steep cost to communities outside Burlington, Scott said. The pandemic presents an opportunity to learn from that experience, he said.

“We can’t put this work off because there will be a point not so long from now when this pandemic is just a bad memory, where the temptation to do things the way we’ve always done them will be strong because it’s easy,” he said.

Scott said his budget, which he will propose later this month, “will focus on weathering the remaining storm and laying a foundation to rebuild our economy. ... At the heart of each proposal will be a goal to level the playing field for every corner of our state.”

Scott said he would not support additional payroll taxes to fund programs. He did, however, propose an expansion of tax increment financing to smaller cities and towns across the state and a revamp of Act 250 to streamline the process, sparking downtown development while preserving the environment.

“This is a real opportunity because we know our demographics have been our Achilles’ heel,” Scott said. “With an aging population and shrinking workforce, we just don’t have the people we need. Think of it this way: We need more taxpayers, not more taxes.”

Earlier Thursday, what the swearing in of Scott, Gray and other statewide officials lacked in crowds or celebratory mood, it more than made up for in Vermont resolve.

The oaths of office were administered with condemnations of Wednesday’s mob violence at the U.S. Capitol, and reminders that state government faces a daunting task in restoring the state’s economy from the COVID-19 pandemic.

The Statehouse was strangely empty for the occasion, thanks to the pandemic, and well-guarded by Vermont State Police and Capitol Police. Most members of the state Senate and House of Representatives watched over online video.

Gray, a Democrat from Burlington, was sworn in by U.S. District Judge Peter Hall, of the Court of Appeals for the Second Circuit, for whom Gray clerked following law school. About 90 minutes later, outside on the portico of the Statehouse, Scott took the oath of office for his third term from Vermont Supreme Court Chief Justice Paul L. Reiber.

Scott then administered the oath at once to Attorney General T.J. Donovan, Treasurer Beth Pearce, Secretary of State James Condos and Auditor of Accounts Doug Hoffer.

Both Scott and Gray, who worked in Washington for U.S. Rep. Peter Welch, pointed to Wednesday’s events at the U.S. Capitol as reasons Vermont’s state government can and must do better.

“Our history shows that as Vermonters we are brave in the face of fear, we defy the odds, we are not afraid of the unknown, and we welcome the opportunity and responsibility to lead and set a new course,” Gray said.

“Our challenge, or opportunity here today, is to commit to the principles and values that give Vermonters a deep pride and full faith in the promise — and the essentialness — of good government,” she said.

Gray also said the past year has “exposed a reckoning” with centuries of racial inequality, which the state must address.

“History will reflect how we come together and what measures we take to protect and promote equal protection under the law and demand respect for human dignity,” Gray said.

Scott gave a shorter speech by online streaming video to a joint session of the Legislature early Thursday afternoon. He hailed the woman leadership elected to lead both houses of the Legislature, calling it “a long time coming, and long overdue.” And decrying the chaos in Washington, he said Vermont’s state government must set a better example.

“Seeing our Capitol — a symbol of democracy around the world — stormed by this mob of traitors was heartbreaking. The fact that these flames of hate and insurrection were lit by the President of the United States will be remembered as one of the darkest chapters in our nation’s history,” Scott said.

“It also shows just how divided our country has become and how desperately we need to heal and be united once again,” Scott said. “Because we simply can’t go on like this any longer, and as elected officials, we all have a responsibility to step up and show the way. Because if we don’t, who will?”

Noting the state’s voters had sent a Republican governor and Democratic legislature to Montpelier, Scott called for consensus and compromise, saying they lead to better results.

“After watching the antics in Congress, Vermonters are pleading for consensus building and pragmatism, and I’m confident we can deliver,” he said.

Both Scott and Gray emphasized the importance of helping the state rebound stronger from the pandemic.

Gray emphasized the importance of addressing the economic and social inequality exposed by the pandemic.

“Not only will be judged by how effectively we continue to meet the humanitarian and emergency needs of Vermonters, but also how we envision and prepare for a stronger more equitable and economically viable Vermont,” Gray said. That includes universal broadband access, affordable child care, paid family medical leave and the opportunities from addressing climate change, she said.