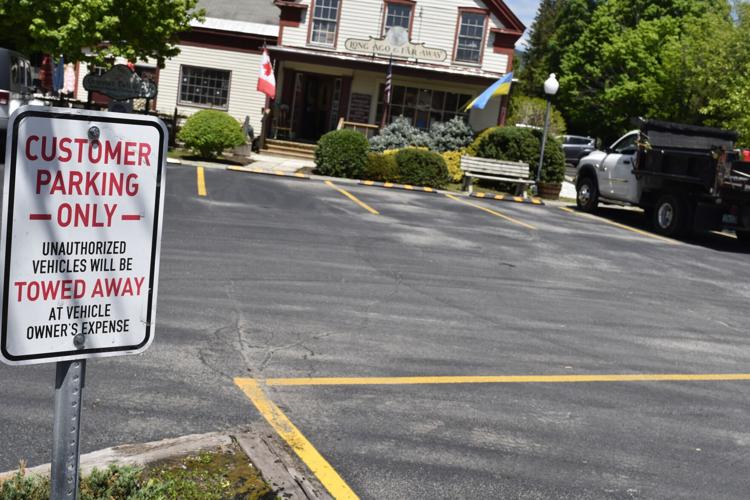 The parking spaces at the Green Mountain Shops are for customers only. But an attempt to enforce that with charges for noncustomer parking was met with resistance, and the property owner says he won't do it again. 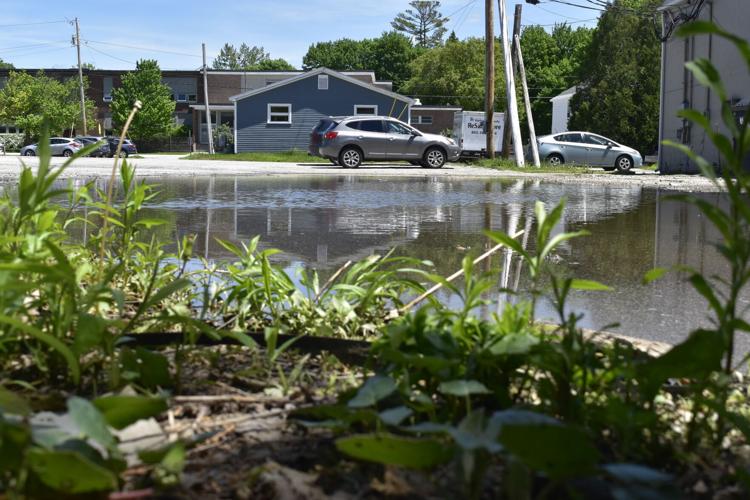 Standing water is seen on town-owned property behind Walgreens that was once used as a parking lot. Business owners on Main Street want to see the lot reclaimed as employee parking, but town officials say complications with the lot have led them to pursue other solutions.

The parking spaces at the Green Mountain Shops are for customers only. But an attempt to enforce that with charges for noncustomer parking was met with resistance, and the property owner says he won't do it again.

Standing water is seen on town-owned property behind Walgreens that was once used as a parking lot. Business owners on Main Street want to see the lot reclaimed as employee parking, but town officials say complications with the lot have led them to pursue other solutions.

MANCHESTER — There will be no more $3-an-hour fees for drivers who park but are not shopping at tenants of the Green Mountain Shops.

But the institution of that policy — and its disappearance 48 hours later — has people talking about parking in the historic Main Street downtown district and potential solutions to its persistent parking problems.

The lot owner, Stanford Wiener of Woodbury, Conn., agreed with some business owners in the plaza that the town-owned parking lot behind Walgreens needs to be fixed and paved, and have lighting installed, so that employees of restaurants and other businesses on Main Street can park there, instead of in the Green Mountain Shops.

That lot was under several inches of water on Monday, and Town Manager John O’Keefe said the town is pursuing other options.

The problems with that site include a potentially complicated land swap with two landowners, including the owners of Walgreens and the Taconic & Green School District, and the need to deal with the stormwater runoff from the Walgreens roof.

The problem, as Wiener sees it? “I’m the only parking on the whole street.” And he doesn’t think it’s fair that his tenants should lose spaces in front of their businesses to people who aren’t doing business with them. “So I think that town should address the issues,” he said.

“So they’ve been parking on our lot. But we don’t have enough spots for employees on the street,” he said.

“There are six restaurants on the street. We get about 200 cars on our lot on the weekend that eat at the restaurants and never walk in any of our stores. Employees park ... there the entire day, and they don’t leave.”

Wiener’s attempt at a solution came Saturday, when a sandwich board sign appeared in the lot, declaring “Parking $3 per hour / 15 minutes free parking for Green Mountain Shops.”

That caught business owners and customers off guard.

On the Northshire Community Forum Facebook page, Wiener clarified that free parking would be 30 minutes for customers rather than 15, and he said he changed the sign to reflect that. He also said that businesses would be given cards to give to customers so they would not have to pay.

“We were just as surprised as everyone else,” said Betsy Turner, who co-owns Long Ago and Far Away with her husband, Grant Turner. She said “at least five of our really good customers” made a point of mentioning the policy.

Another sign in the lot, store owners said, had a QR code — apparently where folks could pay for parking.

Commenters on the Northshire Community Forum noted that the Green Mountain Shops are private property — free to do with as the owner sees fit. Others said they understood why Wiener wanted to do something about the situation on his tenants’ behalf.

While the parking policy had supporters and critics, business owners in the Green Mountain Shops said they’re pleased by the attention Wiener paid to their concerns. That starts with the new coat of asphalt, sealant and parking lines in the parking lot, which were laid down last week.

“I’ve been there going on 19 years,” Gourmet Deli owner Melanie Allen said. “And that’s the first time in 10 years anybody has done anything or cared about the parking issue in our parking lot. I say ‘our parking lot’ because our rent pays for that parking lot.”

They pointed to the town-owned lot behind Walgreens as the missing piece of the puzzle, noting that employees of the former Factory Point National Bank parked there.

At present, if that lot could be paved, its configuration would accommodate three rows of parking, O’Keefe said.

He said the town has been in conversations with other Main Street properties about leasing off-street parking as a solution. One such arrangement showed promise, he said, until the owner called off talks because of liability concerns.

“We’re looking at alternatives versus trying to deal with that parcel, which is problematic,” O’Keefe said. “If we paved what we own, it would be ridiculous.”

Next door, Chris Stannard of The Italian Market of Manchester said he had been in talks with Wiener about possibly leasing parking spaces. Many of his customers have been parking in the lot all along.

He said his first five customers of the day on Saturday wanted to know what was going on.

“I do hope we can get a resolution. When I came in today, not seeing any signs, I was like, ‘OK, that’s a good sign so far,’” Stannard said.

Finial and Parquet owner Bret Carter said Wiener “has been a good owner. He’s made improvements. He’s active and seems to care..”

“It’s one of the larger pieces of commercial property in the town, and he wants to make it better,” Allen said. “He’s looking out for us. Number one, he wants to be able to collect his rent. Number two, he’s got a good heart. He’s a genuinely nice guy.”

Whatever happens next, it won’t be paid parking at the Green Mountain Shops, Wiener said.