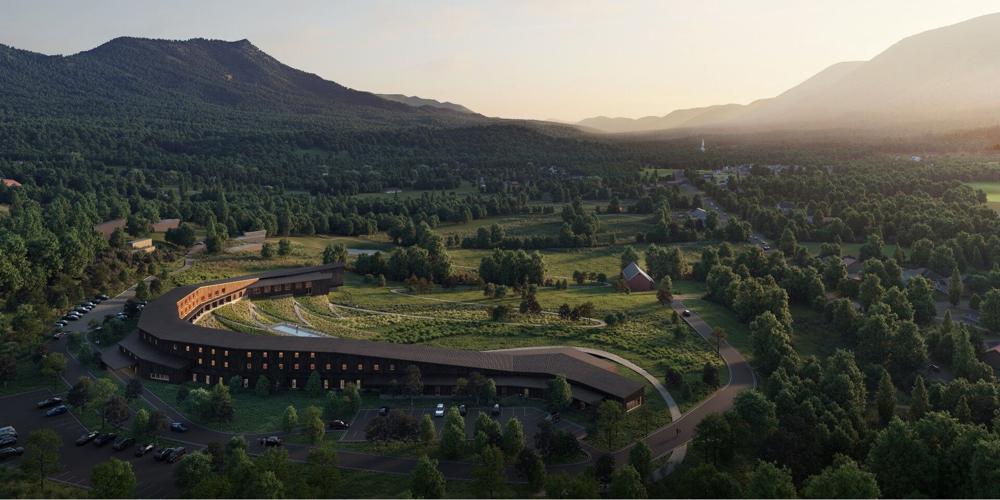 An architects rendering of the Orchid hotel and spa proposed for Main Street in Manchester. The enterprise, led by Bill and Stephen Drunsic, has reimagined the design of the hotel to match the contour of the surrounding area, and limit noise for nearby neighbors. 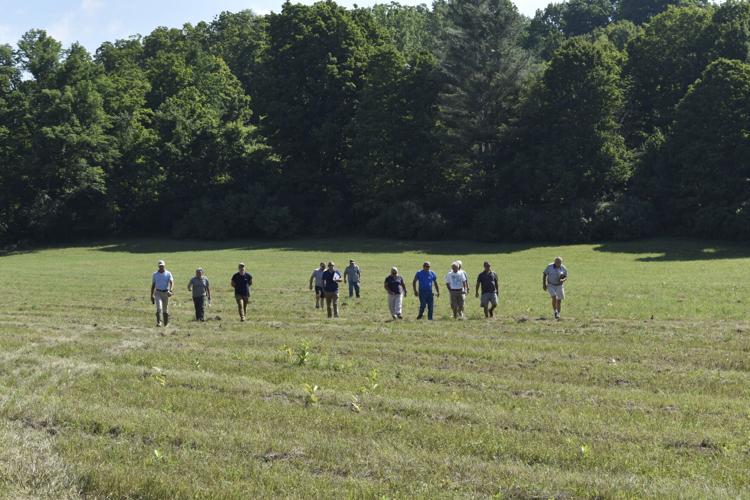 Members of the Development Review Board walk across the newly mowed site of the proposed Orchid hotel and spa at 5940 Main St. The DRB visited the site last month.

An architects rendering of the Orchid hotel and spa proposed for Main Street in Manchester. The enterprise, led by Bill and Stephen Drunsic, has reimagined the design of the hotel to match the contour of the surrounding area, and limit noise for nearby neighbors.

Members of the Development Review Board walk across the newly mowed site of the proposed Orchid hotel and spa at 5940 Main St. The DRB visited the site last month.

MANCHESTER — Some neighbors of the proposed Orchid Hotel and Spa on Main Street in Manchester are calling for an acoustic study of the project, saying they’re concerned about the noise impact of construction and operations.

Testifying before the Development Review Board on Wednesday night, Jay Gerber of Moonridge Road cited a section of the town zoning ordinance that stipulates that if a proposed use is “deemed likely to have noise impacts” the board may require a professional acoustical analysis of the site, and require design strategies to manage noise.

According to proponents Bill and Stephen Drunsic, the 80-unit hotel and spa, planned for 5940 Main St., was redesigned in part to lessen the noise impacts of its operations on the surrounding area by directing it away from the nearby neighborhood. Their company, Orchid LLC, purchased the site in 2019.

The new design, by architect Kyle Murphy, replaces the previously permitted hotel with a more linear building, with all of its rooms facing away from the hillside behind it — highlighting views of the town and mountains to the south and directing sound toward Main Street. The original permit was approved a decade ago.

During a site visit two weeks ago, the applicants set up a makeshift wall and put a speaker next to it, played wedding-appropriate music by the late Gerry Rafferty at 95 decibels — which Bill Drunsic said was a good representation of volume expected from the hotel’s patio and restaurant. They also raised a lift to the approximate roof height of the building to get a sense of how sound would behave.

Drunsic said that the makeshift wall didn’t come close to representing what’s proposed for the site. But he added that there was “a notable difference” in volume on the other side of the wall, and that it dissipated further away from the proposed footprint.

“I think the impacts of this redesigned structure are significantly less than the currently permitted project,” he said.

“I think everyone recognizes that putting up a boombox on a day in the middle of summer hardly qualifies as an acoustical analysis by a qualified professional,” Gerber said. “And I also think that the likelihood of there being noise generated throughout the area is quite substantial.”

“I appreciate the effort that they’re making, And I think if properly conceived, designed and constructed this property will benefit the community,” Gerber added. “But I also feel that the noise level really does have to be taken into account.”

Lastly, Gerber asked that the construction hours for the project, currently proposed from 7 a.m. to 7 p.m., be shortened to 8 or 9 a.m. to 5 p.m.

Dee Myrvang, Heather Newman and Joel Ario all said they agreed with Gerber that a formal sound study should be undertaken.

Also addressing noise, and potential visual and traffic impacts, Casablanca Motel co-owner Linda Benway said that during the test, her fellow co-owner, Diane Pouliot, was able to hear the music’s bass frequencies, as well as the lift operating.

“I’m not opposed to the project at all. I just want to mitigate the noise and light,” Benway said.

Benway and others also asked whether the sound impacts would be the same in winter, when trees lose their leaves. But Stephen Drunsic noted that there would not be outdoor music on the patio in winter.

The hearing was formally closed, and a decision from the board is due within 45 days.

The board also heard from Stanley Stroup, who is seeking to designate property at 317 and 325 Silver Springs Lane as a planned residential development for the purpose of conserving two of its five parcels, and using a third as a public garden. The garden would be opened to use by the public.

In addition, the board heard a continuation of Sam’s Wood Fired Pizza’s request to redesign its outdoor seating area. Owner Sam Johnson, who previously said he had run into complications with the neighboring Shaw’s Supermarket over where the property line is, updated the board with plans to move his proposed outdoor seating back 10 feet to avoid that dispute altogether.

Johnson also proposed putting up a temporary shade over the seating instead of using table umbrellas, because the umbrellas tend to break. “Umbrellas these days, they just don’t make them that strong,” he said.

Also appearing before the board were Jai Mataji LLC, which is seeking to designate the Chalet Annex Motel at 1778 Depot St. as workforce housing under the adaptive reuse provision of the zoning ordinance. That provision allows motels in the Mixed Use 3 zone to be redeveloped as apartments.

Jaydeep Gandhi, speaking for the business, said it would operate as 31 units of single and double occupancy workforce housing for ski industry employees between November and April, and then as a motel the rest of the year. The motel was used for a similar purpose last winter.

Board chair Tim Waker, who is in the plumbing business, asked if the two washers and dryers now on site would be enough for up to 62 workers staying on site. Gandhi said the motel could add one more pair of machines, but Waker advised that the business consider more — and make sure that its septic system can accommodate the additional use.

Residents Sylvia Jolivette and Ann Zaia took issue with the motel seeking a workforce housing designation for only part of the year, saying there’s a need for that housing year-round. Zaia, whose property abuts the motel, also said noise had been an issue at times, while acknowledging that the business has addressed those concerns when they’ve been raised.

Gandhi said rents would be between $1,200 and $1,600 monthly. As the motel contracts with one of the ski areas, issues and complaints have been handled by the employer. He noted that the motel had no police or ambulance calls for its residents last winter.