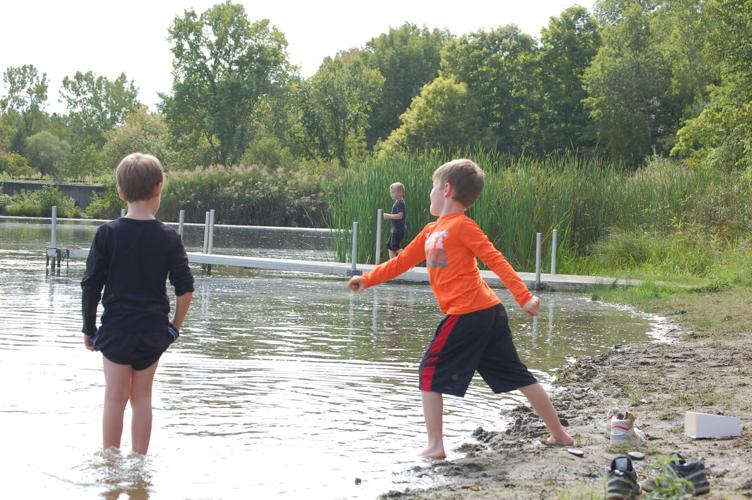 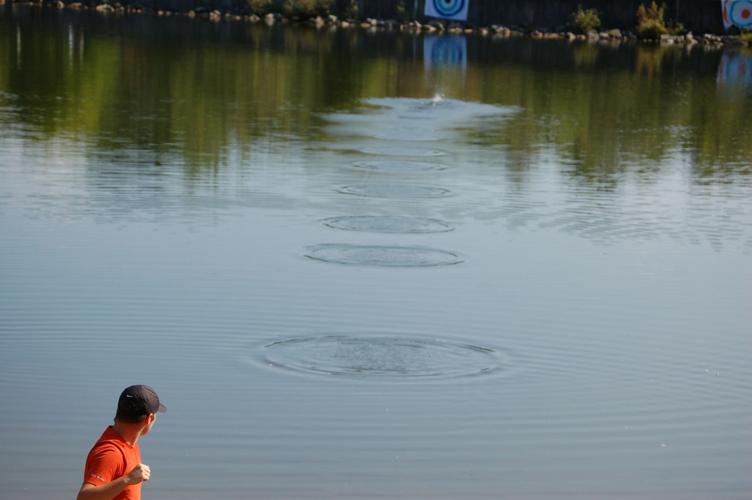 NORTH BENNINGTON — With the sun shining and temperatures in the lower 70s, the last Saturday of summer was just right for a day on the water. Over 100 people chose to spend it at Lake Paran, either as spectators or as competitors, in the venue’s ninth annual stone skipping festival.

Professional stone skippers travelled from as far as Pennsylvania and Kentucky to participate in the only such event in New England, but there were divisions for all ages and ability levels.

Besides the fantastic weather, there were food vendors and music for all to enjoy at the lake that State Senator Brian Campion, who served as emcee for the competition, referred to as “a hidden gem” in Southern Vermont.

While some stone skipping competitions are based on distance, the focus on Saturday was to achieve as many skips as possible on the water, as determined by three judges that would quickly convene and agree upon a number. Each division’s participants were ranked first through third place based on best single skip, as well as best cumulative score (combined total of three skips).

There is quite a bit of science and skill to skipping stones. Precise spin is required to keep the stone flat and bouncing off the water, as opposed to starting to tumble and therefore sink. Per the festival’s rules: “All stones used must be natural and unchanged from their natural state.”

The stones used are no small factor, as the Guinness World Record holder for most skips, Kurt Steiner, attests. Steiner set the current record of 88 skips in Pennsylvania in 2013. He looks for stones “that weigh between 3-8 ounces... that are very smooth (they don’t have to be perfectly round), flat bottoms and are between 1/4 — 5/16th of an inch thick,” per the Guinness website.

A few dozen youngsters, separated into an under 7 division and a 7-13 division, tried their hand at skipping, learning from some of the best, watching the pros practice earlier in the day.

Following the kids divisions was an amateur division. With Campion calling a few (literally) colorful personas such as “Rainbow” and “Quail Man” to the beach, many contestants quickly found out how hard skipping a stone (especially with an audience) can be. Some stones didn’t skip at all.

It was all in fun for the amateur division, of course, except for one interesting caveat. Any amateur who scored a single skip of 20 was immediately eligible to compete in the next round against the pros.

Several bullseye targets were draped over the bridge across the water from the beach, seemingly in jest. That is, until the pro division’s winner, “Drew from Canada,” wowed the crowd with a 38-skip throw that hit the right-most target that was exactly 100 yards away.

Stone skipping as an organized sport might not be familiar to many, but it has quite a following. It found its way to North Bennington almost a decade ago when an avid stone skipper from the New York City area, Paul Ferro, was visiting. Ferro was among the competitors on Saturday.

Ferro was skipping rocks at the lake and commented at the time on what a great location it was to his close friend, Alisa del Tufo. Del Tufo, chair of the Lake Paran board, suggested organizing an event here, and the festival was born.

Stone skipping was originally included as part of an entire water festival in partnership with Bennington College. The festival was in conjunction with the college’s efforts to raise awareness for worldwide water insecurity. Over time, stone skipping got so big it became its own affair.

“It grew into its own thing,” said del Tufo. “It’s like all the people up there hiking on the Appalachian Trail, we don’t know they exist. It’s just like this. People travel from all over the place to skip stones.”