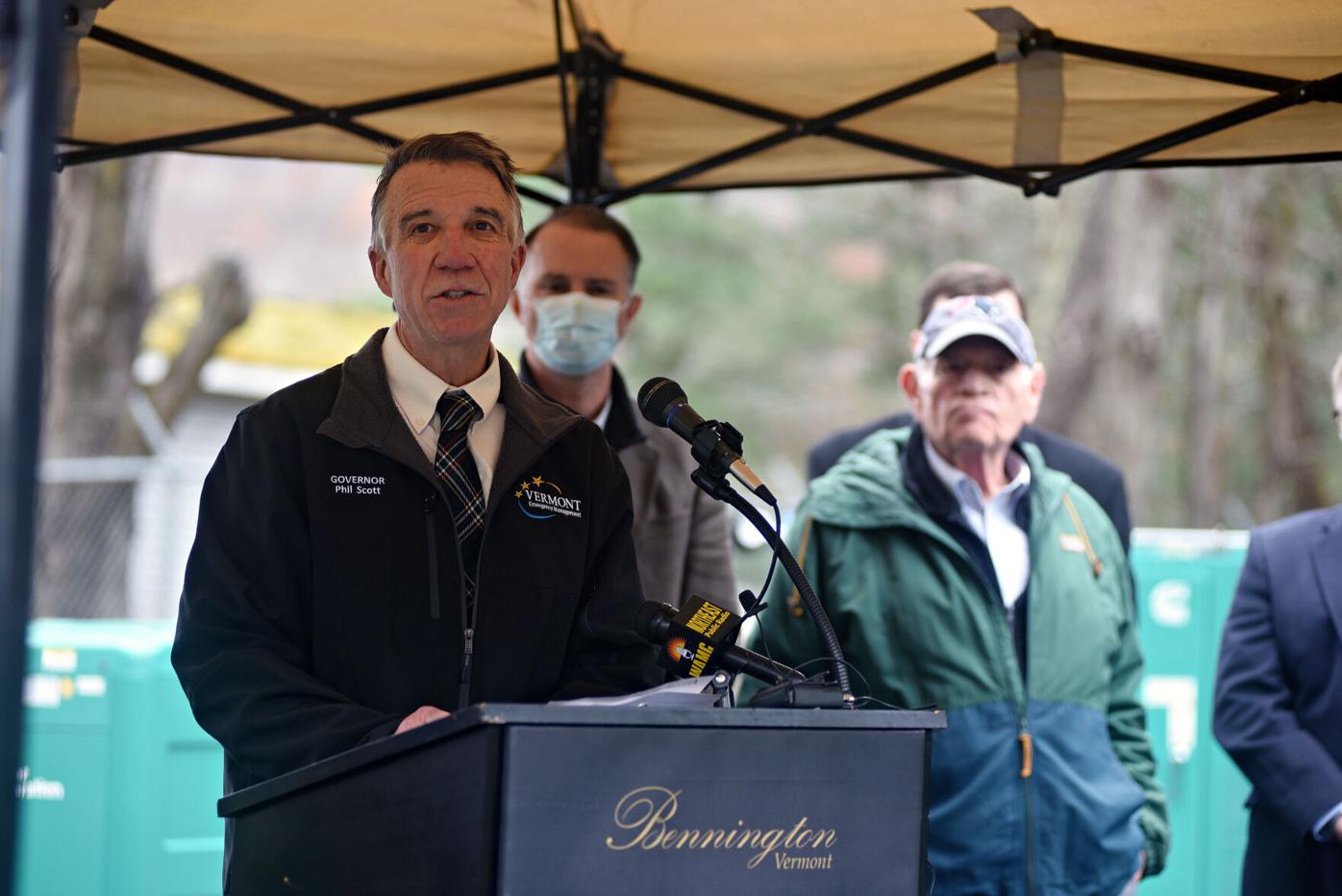 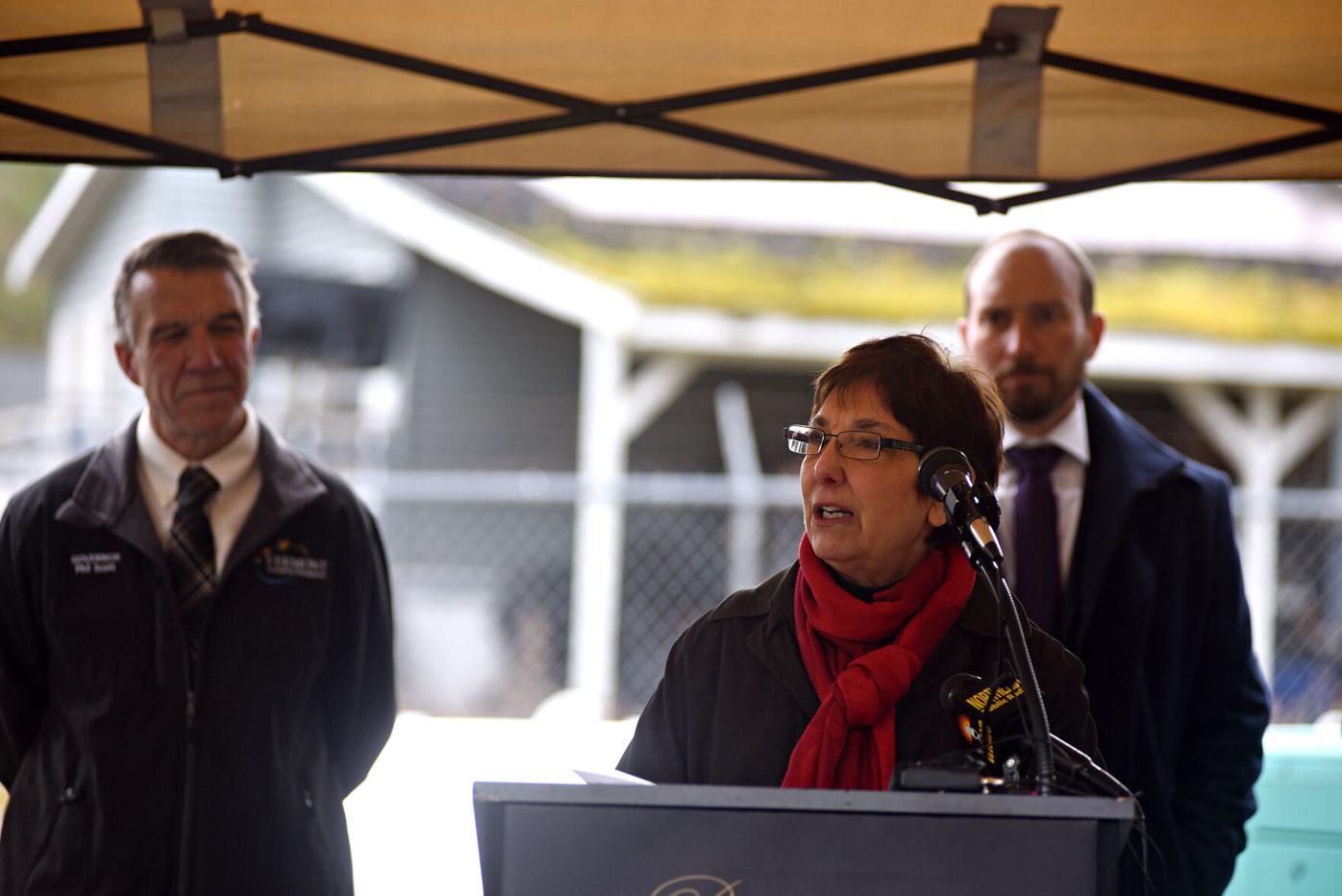 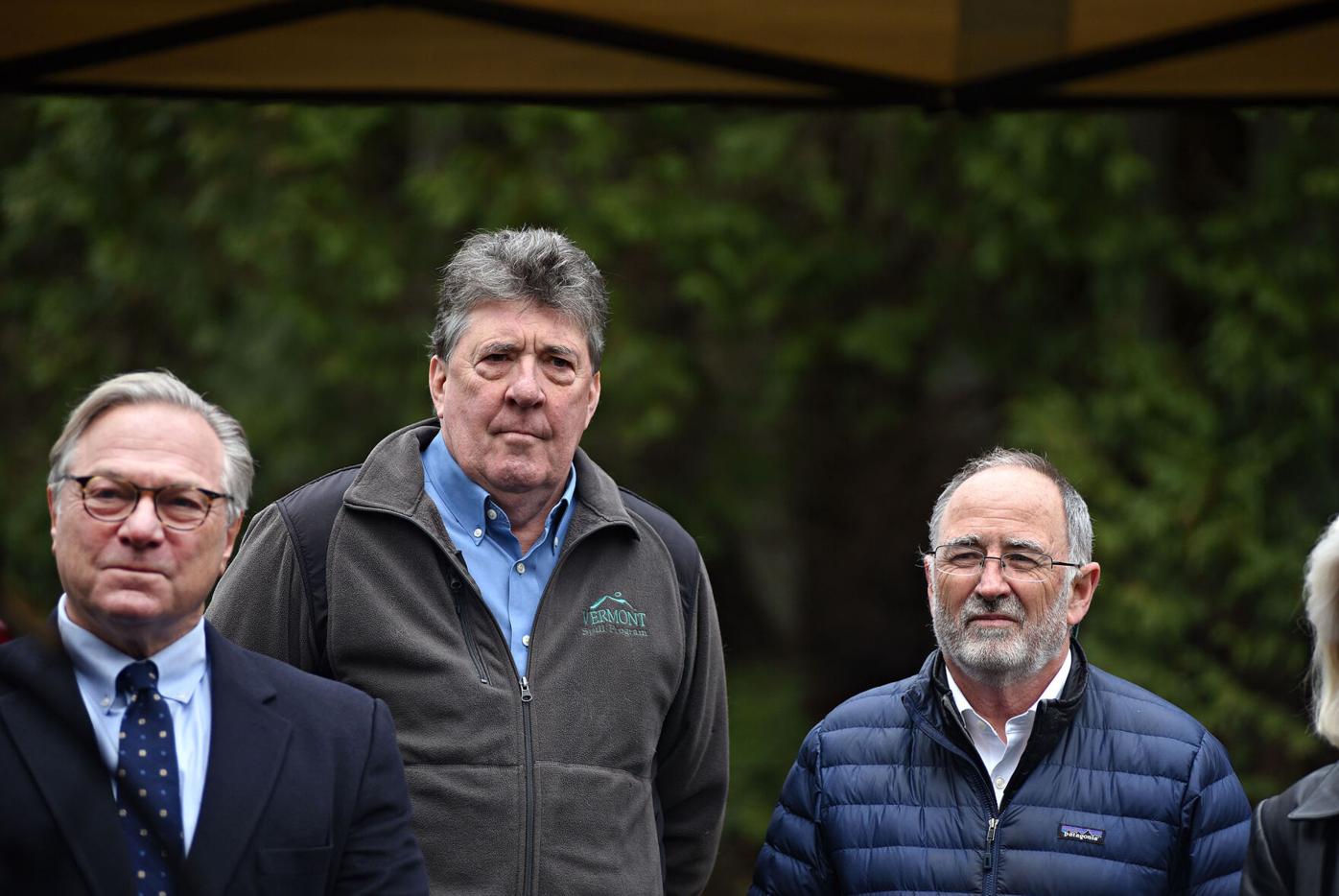 CAROLINE BONNIVIER — BENNINGTON BANNER David Silver, left, one of the attorneys who represented area residents in a class-action suit in federal court over PFOA contamination of Bennington area wells, and Richard Spiese and John Schmeltzer, of the state Department of Environmental Conservation, both of whom worked closely with area residents and town officials as the state responded to the contamination discovered in hundreds of local wells in 2016, listen as Vermont Governor Phil Scott speaks at the press conference in Bennington on Monday.

CAROLINE BONNIVIER — BENNINGTON BANNER David Silver, left, one of the attorneys who represented area residents in a class-action suit in federal court over PFOA contamination of Bennington area wells, and Richard Spiese and John Schmeltzer, of the state Department of Environmental Conservation, both of whom worked closely with area residents and town officials as the state responded to the contamination discovered in hundreds of local wells in 2016, listen as Vermont Governor Phil Scott speaks at the press conference in Bennington on Monday.

BENNINGTON — State and local officials, including Gov. Phil Scott, joined Bennington residents Monday to celebrate the completion of a multi-year project to bring clean drinking water to hundreds of properties with wells contaminated by the industrial chemical PFOA.

Extending new town and North Bennington village water lines to more than 440 residences was “an incredible team effort,” Walke said. “It’s truly remarkable, and I want to give thanks for everybody’s involvement.”

Walke said the effort involved five years of cooperation across state Agency of Natural Resources divisions, the Attorney General’s Office, municipal officials and the entire Bennington area legislative delegation, as well as a sustained effort from both the Democratic administration of former Gov. Peter Shumlin and that of Republican Gov. Scott.

A pair of industrial chemicals — PFOA (perfluorooctanoic acid) and similar per- and polyfluoroalkyl substances (PFAS) — were traced by the state to exhaust emissions from two former ChemFab Corp. factories here. The contamination was discovered in hundreds of local wells in 2016.

Scott, speaking during a media conference Monday morning, noted that he attended an event in December 2017 to mark the connection of the first home to receive town water via a new water line to address PFOA in wells. During that event, officials gave a toast with glasses of tap water.

“It is incredible to see the progress that’s been made since that day,” the governor said.

As a former construction contractor, Scott said he is “impressed by the magnitude of the project, and how quickly it was completed.”

He said the project involved water lines that would reach from Bennington to Dorset if laid end to end.

He thanked all the state and local officials involved in the long effort, adding that the accomplishments “show what we can do when we work together, when we share a common goal and don’t let politics and partisanship get in the way.”

With additional work to do, the state maintains a commitment to “every Bennington resident that was impacted” to provide access to clean water, Scott said.

The project involved some 21 miles of new water mains and 15 miles of service lines to properties affected by the contamination.

More than $50 million for the water line work and related expenses incurred by the state in addressing the pollution was provided through court-approved consent agreements with the last owner of the ChemFab plants — Saint-Gobain Performance Plastics — after successful negotiations with the Agency of Natural Resources and the Attorney General’s Office.

Resident Lora Block, who lives in the Apple Hill area of Bennington, described becoming aware of contaminated wells in town, but thinking, “we weren’t even close to ChemFab.”

But tests did find elevated levels of the chemical in her well, and the family immediately had to switch to bottled drinking water provided by the state.

“I remember thinking how much of a terrifying roller coaster it was,” she said Monday.

Her family had lived in the home for more than 40 years, Block said, always thinking they had some of the purest well water in Bennington.

State officials determined that PFOA, which was used in the production of Teflon, was released through the ChemFab exhaust stacks while fiberglass fabric was coated with liquid Teflon and then dried at high temperature. The contamination worked through the soil into groundwater across a swath of town, affecting hundreds of wells.

Block joined Scott and Walke in thanking those DEC officials, including Richard Spiese and John Schmeltzer, who were in Bennington numerous times over the past five years, often for public meetings to answer the questions of residents and explain next steps in the effort to provide clean water to everyone.

“There were so many questions that nobody knew the answers to,” Block said, some involving chemistry, hydrology and other scientific disciplines.

She praised the DEC officials and others who came to Bennington, where they were “facing our questions, facing our anger, facing our confusion,” and helping residents understand what was happening and what would happen next.

“It took such a huge team of people to help us,” Block said.

Also thanked were members of the legal team that separately sued Saint-Gobain in federal court on behalf of affected residents, including property owners and those who drank contaminated water and later found they had elevated levels of the chemical in their blood.

David Silver, of Bennington, one of several attorneys pressing the class-action suit, said the “number-one priority” has been to obtain money for continued medical monitoring for possible effects of PFOA, which is associated with kidney, testicular and other cancers, ulcerative colitis, thyroid diseases, pregnancy-induced hypertension and high cholesterol.

Levels of PFOA in the blood are known to decline slowly over many years.

The plaintiffs’ attorneys announced last week that a settlement agreement was reached with the company to provide $31.15 million, which includes $6 million for long-term medical monitoring. The agreement is now before Judge Geoffrey Crawford in U.S. District Court in Rutland, with the parties seeking final approval.

Silver said another priority was to have the medical monitoring provided locally, including at Southwestern Vermont Medical Center.

Town Manager Stuart Hurd said Thanksgiving is coming soon, “and it is a time to give thanks.”

He thanked the gathered officials and also cited the work of the engineering firms, MSK Engineers, working in Bennington, and Otter Creek Engineering, working in North Bennington, that undertook the task of designing for the addition of hundreds of new water system connections.

And Hurd recognized Saint-Gobain, a multinational firm, which he said “could have made this the fight of a lifetime, and they didn’t; they stepped up,” reaching consent agreements with the state.

The France-based company acquired ChemFab — a business that formed in Bennington in 1968 — in 2000. Saint-Gobain moved the last coating operations from the North Bennington plant to Merrimack, N.Y., two years later, and the factory has remained closed.

Attorney General T.J. Donovan thanked those in government and the private sector who helped deal with the widespread environmental crisis. He thanked the people of Bennington “for your patience and for your advocacy. Because it was your advocacy that moved government to get this done.”

Donovan said it has been the role of his team, including Rob McDougall, chief of the AG’s Environmental Protection Division, who attended Monday, and others, “to hold companies responsible” for pollution.

And he recited a quote from the late William “Sandy” Sumner that describes what many residents of the area endured because of the contamination.

Sumner referred to a “film of very black dust” that began emanating from the North Bennington ChemFab factory during the 1990s and permeating his nearby home, Campion said. The testimony was provided in 2017 before the Senate Committee on Natural Resources and Energy, on which Campion serves.

Sumner reported that he and his wife “began to experience nose bleeds, headaches and coughing fits” when the smoke settled over his property, Campion said, adding that when Sumner complained to state officials, he was told the company was following existing state and national environmental guidelines.

Sumner, who died over the summer, was found to have one of the highest levels of PFOA in his blood in Vermont, Campion said. “Nobody should have to go through this.”

Schmeltzer said after the conference that the DEC continues to work on behalf of those residents who are not able to connect to water lines and are using in-home filtering systems to provide clean water.

Saint-Gobain is obligated under agreements with the state to continue to provide safe drinking water going forward.

The Agency of Natural Resources has said that other homes and businesses remain in the ongoing long-term monitoring program, with Saint-Gobain obligated to continue to sample these water supplies to ensure PFAS levels are below the state standards.

If a water supply exceeds the standards for PFAS, the company is obligated to provide short- and long-term remedies for that water supply.