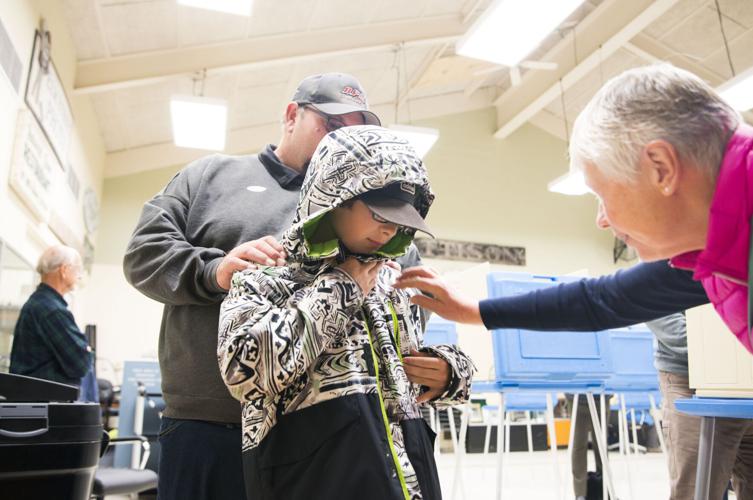 Nikolai Epstein, who came to vote with his grandpa, Shane Shores, receives a "Future Voter" sticker from Astri Kilburn in Manchester on Election Day. 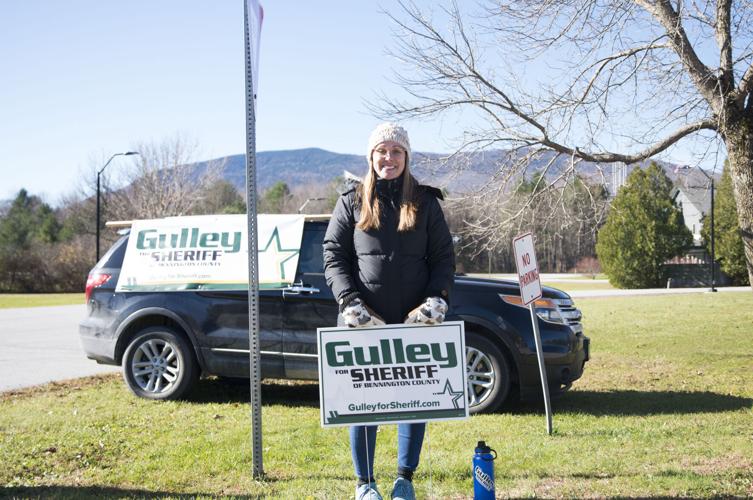 Katie Gulley campaigns outside of the Manchester polling place on Tuesday.

Nikolai Epstein, who came to vote with his grandpa, Shane Shores, receives a "Future Voter" sticker from Astri Kilburn in Manchester on Election Day.

Katie Gulley campaigns outside of the Manchester polling place on Tuesday.

“It was a really good campaign on both sides,” said Rice, who was elected to public office for the first time. “I just tried to meet as many people in the five towns as I could and hear what they’re looking for from their state Legislature.”

Gaiotti was not immediately available for comment Wednesday morning.

In the Bennington-4 District, things were not nearly as close. The district, which awards two seats, was won handily by the team of Democratic incumbents Kathleen James (2,516 votes) and Seth Bongartz (2,503) of Manchester. Bongartz trailed James by just a handful of votes in every town except Manchester, where the total was 1,500-1,490 in favor of Bongartz.

James and Bongartz nearly doubled the votes for Republican candidate Joe Gervais, who received 1,368. Gervais trailed Bongartz by an even 200 votes in his hometown of Arlington (684-484). Gervais’ received the most support in Sandgate, where he only trailed Bongartz for the second seat 112-89.

“I’m really excited to represent our communities during the upcoming biennium, so we can keep working on critical issues like housing, child care, education and climate,” James said. “[Seth and I] will be announcing our constituent coffee hours very soon and look forward to hearing from folks across the district.”

Gervais also received the eighth most votes for justice of the peace in Arlington, which only awards seven positions.

“I put in a good effort, and I’m proud of the results,” Gervais said. “I wish Kathleen and Seth the best.”

Voters in the Northshire were clearly motivated to make it to the polls, perhaps at least in part because of the two hot-button initiatives on the ballot.

The Northshire was in line with the statewide trend of support for Proposition 2, which clarified the Vermont Constitution on the prohibition of slavery, and Proposition 5, which ensures reproductive liberty for all citizens of Vermont. Both only required a majority vote to be ratified, but passed overwhelmingly.

“I think this is probably the most important [election] that I can remember in my 88 years,” said Joe Will, as he and his wife, Norma, left Manchester Town Hall. “I think not just for the interest in rulings here, but the whole country.”

They are backed by data showing towns across the Northshire all exceeding the state average for voter turnout this year of just under 55 percent, according to the Secretary of State’s Office. Dorset was among the highest in all of Vermont, with 68 percent of registered voters casting a ballot.

“In the 2020 general election, we had a rough estimate of 2,800 voters,” said Anita Sheldon, town clerk for Manchester. “So for a midterm election, what we’re at is pretty incredible, in my opinion.”

Beau Alexander received the third most votes with 118.

Tory Rich can be reached at trich@manchesterjournal.com.