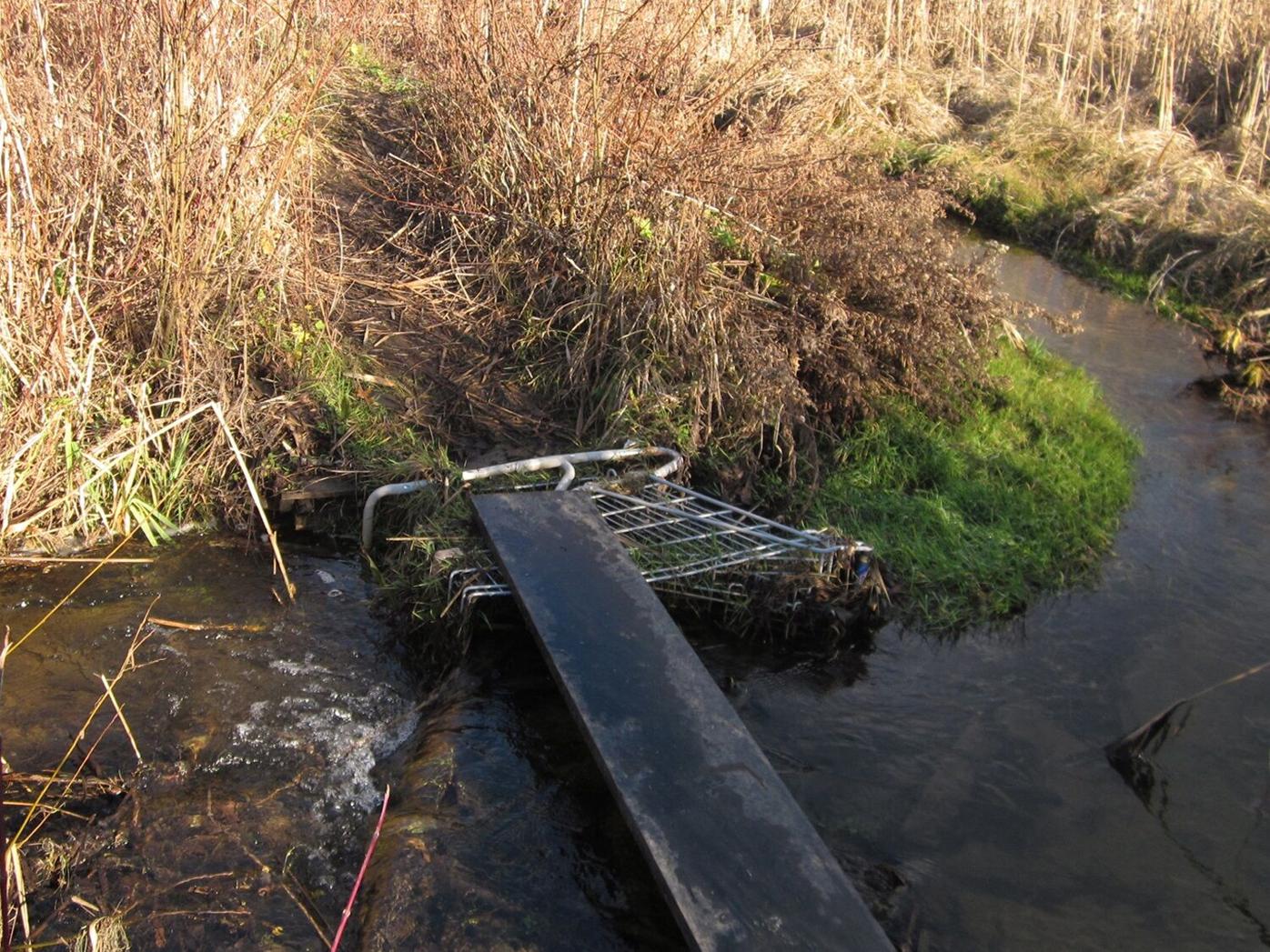 A board perched atop a shopping cart served as a bridge on a path connecting the Orchard Village and Willow Brook residential communities. A brand-new span has taken its place. 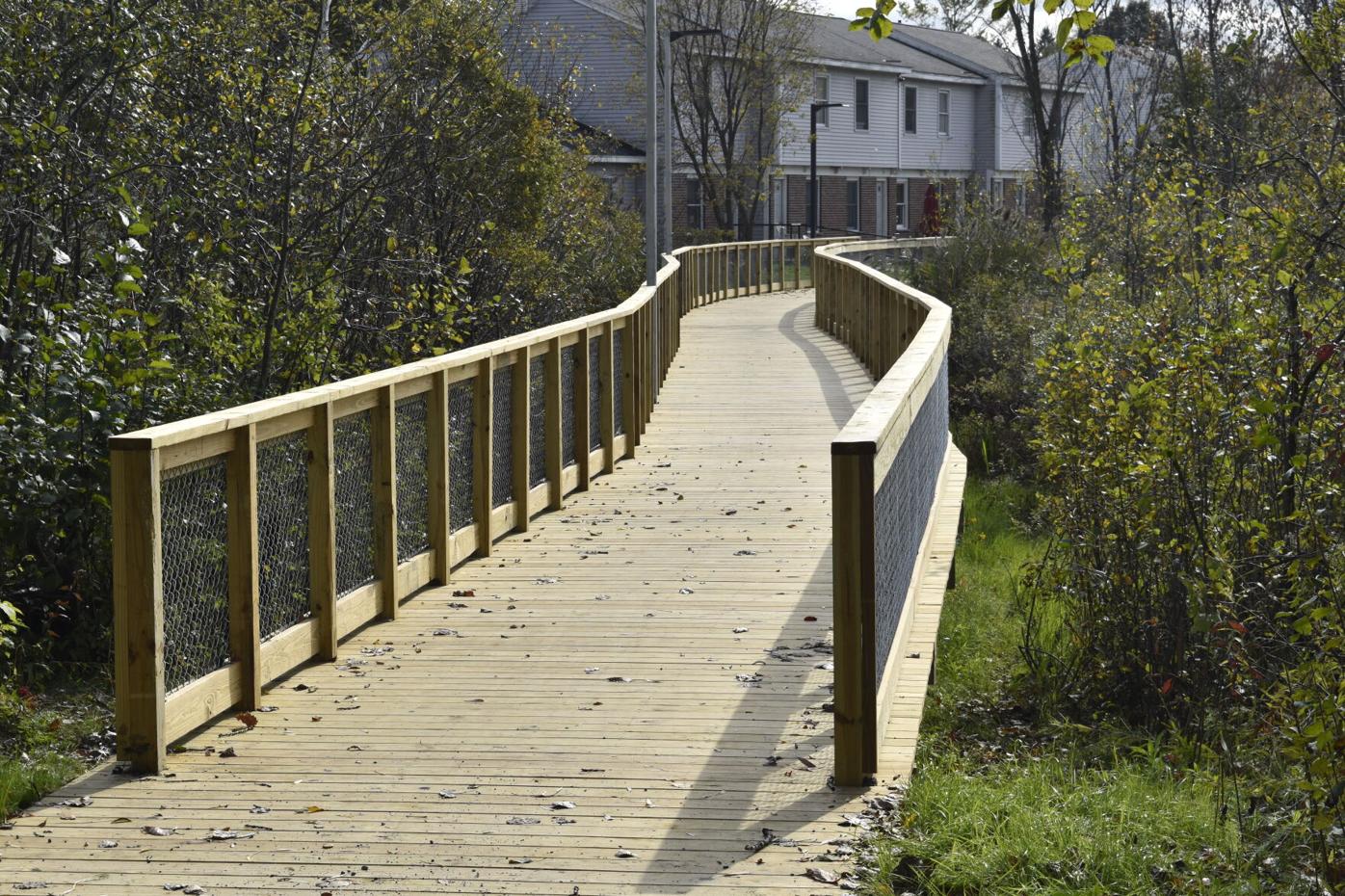 One of two bridges on a new path connecting the Willow Brook and Orchard Village residential communities. The 480-foot path, built with state transportation dollars and matching funds, replaces a makeshift footpath through marshes and streams.

A board perched atop a shopping cart served as a bridge on a path connecting the Orchard Village and Willow Brook residential communities. A brand-new span has taken its place.

One of two bridges on a new path connecting the Willow Brook and Orchard Village residential communities. The 480-foot path, built with state transportation dollars and matching funds, replaces a makeshift footpath through marshes and streams.

BENNINGTON — Where there once was a dirt path through marshes and a makeshift bridge made from an old board and a wayward shopping cart now stands a pair of handsome spans carrying pedestrians and bicyclists over the wetlands between the Orchard Village and Willow Brook residential communities — and providing a safer, smoother passage for students and families to nearby Molly Stark Elementary School.

A ribbon-cutting for the new path, 10 years in the making, is planned for 4 p.m. Thursday.

Drive to the end of Willow Brook and park along the fence, and visitors will find an inviting 480-foot path with hard-packed gravel, LED lighting, and two boardwalk sections, now running over the wetlands and streams where a muddy makeshift path once cut through private property and marshes. It provides the residents of Orchard Village (formerly known as Applegate) an alternative to driving, or to walking along busy Orchard Road.

“The first time I walked on it, I saw a young man with his son,” said Mark Anders of the Bennington County Regional Commission, whose conversation with Molly Stark Elementary School 10 years ago sparked the project. “I asked the man what he thought, and he said he loves it because he has a job at Price Chopper at night, and he was so scared of walking Orchard Road.”

The project, led by MSK Engineering and designed by Goldstone Architecture, cost $419,000, with $315,000 of that for construction. Federal transportation dollars provided most of the funding, and three grants from the Vermont Agency of Transportation also helped pay for the project, Anders said. Local matching dollars came from sources including the Town of Bennington, the former Bennington School District, and the United Way.

Because the project was largely funded with federal highway dollars, it needed to meet regulations that come with that money — “almost identical” to building an interstate highway, he said. The hurdles include wetlands permitting, right of way acquisition, and meeting the design requirements of the Americans with Disabilities Act, Anders said. “There’s a big elevation change between the beginning and ending. We had to engineer that,” he said.

Anders said the project began as an idea in 2011, when a conversation with educators at Molly Stark Elementary School produced a startling fact: That absenteeism was higher among students from Orchard Village. What planners learned was that those students didn’t come to school if they missed the bus or didn’t have a ride, because there was no safe walking route along Orchard Road.

There was a path, of course, but it led through swampy private property.

“I’ve been hearing a lot about the history behind the path,” current Molly Stark principal Donna Bazyk said. “I got very muddy when I walked through it last year. It is quite wet ... and so I’m excited to hear about its completion.”

In addition to a safe route from Orchard Village to the Willow Brook and Molly Stark, the addition of the path will provide an opportunity for students and their families in both communities to take part in educational and social activities, Bazyk said. Fifth graders at the school shared with her that they already like using it to walk their dogs and visit their friends in both communities, she said.

“It’s an extension to more relationship-building within the community,” she said.

“We hope that this might promote family engagement for the school as well,” added Katie West, the communications coordinator for the school district. A safe, usable path could allow the school to hold family events at Willow Brook’s community center, she said.

From the perspective of Anders and the town of Bennington, the path also offers an alternative connection to downtown Bennington, once the rail trail from the old rail depot downtown to Northside Drive is completed. The Bennington Select Board was to hear an update on that project on Monday night.

Anders said the path “will have a big impact on people’s everyday lives.” Some residents in the area have one car or none at all, he said, making alternative access an equity issue, as well as a transportation planning issue.

“One group that has been ignored in transportation projects in this state are children. If you’re under driving age or can’t afford a car, its hard to get around,” Anders said. “It’s nice that finally there’s a project that addresses those mobility issues for kids.”

Thursday’s ceremony will be held just beyond the first bridge on the pathway. Guests should drive to the end of Willow Brook Drive and park along the fence.

One group that has been ignored in transportation projects in this state are children. If you're under driving age or can't afford a car its hard to get around. .... It's nice that finally there's a project that addresses those mobility issues for kids.